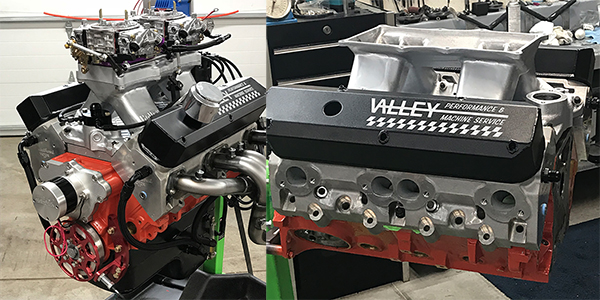 Building engines for customers is what pays the bills, but its not very often that engine builders get to go head-to-head for bragging rights outside of the racetrack. So when Jack Barna of Valley Performance and Machine Service heard about the Race Engine Challenge, he wasted no time putting together this 376 cid Mopar engine. Find out what went into the build and how he faired on the dyno!

Building engines for customers is what pays the bills, but its not very often that engine builders get to go head-to-head for bragging rights outside of the racetrack. Enter the 2018 Race Engine Challenge. Held in Charlotte, NC in October this year, the dyno competition pinned engine builders up against one another on an average horsepower per cubic inch basis. The competition was divided into two classes – a Hemi canted valve class and an inline valve class.

When Jack Barna of Valley Performance and Machine Service heard about the opportunity to prove his engine-building worth, he wasted no time. 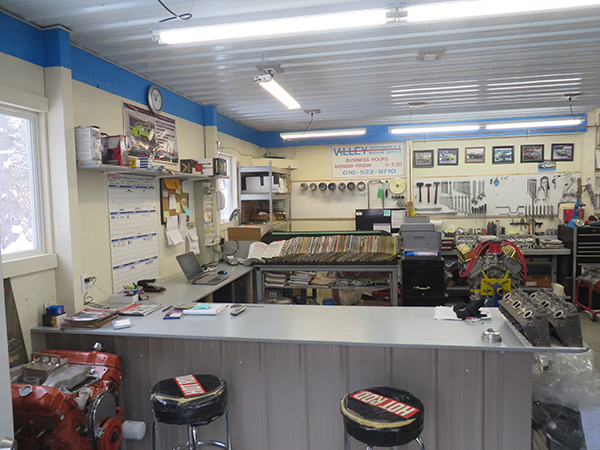 “We decided to run the Race Engine Challenge last March,” Barna says. “The competition was average horsepower from 4,000-7,500 rpms, and the rules were max compression of 11.99:1 and max camshaft lift was .775˝.”

Barna first got interested in engines and racing during his high school days. He rebuilt his first engine at the age of 16, and he’s been doing it ever since.

“After school, I was just working a regular job, but I was still racing,” he says. “I started building a motor, and that turned into several motors. I started doing more and more engines and it soon became difficult to find someone to get the machine work right. I just couldn’t get the tolerances I needed, so that’s when I finally decided to start buying my own equipment and then officially opened up Valley Performance and Machine Service in September 2001.” 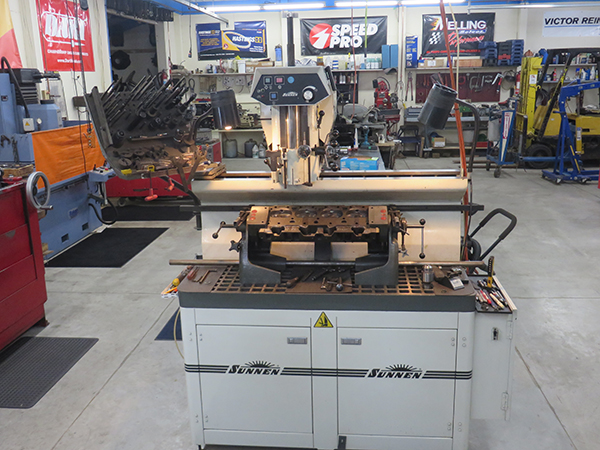 The three-man machine shop is capable of doing everything in-house with the exception of crankshaft grinding. The shop does a little bit of everything, but its main focus is drag car, circle track, street rod and restoration.

“I’m kind of Mopar guy myself,” Barna says. “I’ve always been into the Mopar crowd, so that’s my specialty, but obviously we do Chevy, Ford, Pontiac, etc. We’re good at doing them all.”

Recently, Valley Performance put up a new building that is 2,750 square feet, which for Barna, is as big as he wants it to be – for now. 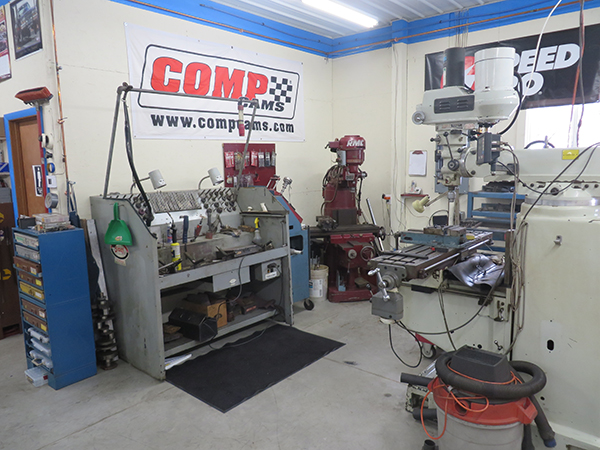 One of the reasons Barna wanted to enter the Race Engine Challenge was to obviously prove he can compete with the best of engine builders, but also to drum up Mopar business. Naturally, Barna entered the competition with a 360 Mopar engine.

“We wanted to run a Mopar because I’m trying to pick up some Mopar business because it’s a small niche I want to focus on more than anything else,” he says. “We went with a 360 Mopar that’s actually a Magnum with Edelbrock Victor heads on it.”

Barna says they chose to build a small block mainly because of the cylinder heads. The Edelbrock Victor head is capable of flowing a lot of air, has a nice chamber and it makes a lot of power. 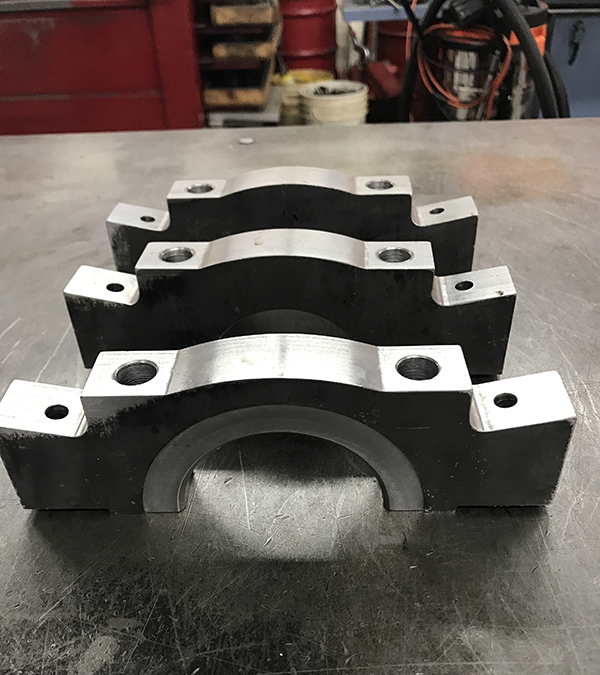 “In our class for the Race Engine Challenge we were running against Chevy LS engines, a Ford with Yates C3 heads, and some pretty bad motors as far as trying to make a Mopar compete against that stuff,” he says. “We knew we had to have something really good.”

The displacement rules were a minimum of 370 cid and a maximum of 490 cid. Valley Performance chose to stay on the small side because if you go too big you put the engine at risk of running out of airflow. The dyno runs would go up to 7,500 rpm.

“We didn’t want to starve the motor at all,” Barna says. “We actually bored the motor .100˝ over and ended up at 376 cid. So we were just over the minimum. We chose to go .100˝ over to unshroud the heads to get as much room around the valve to help the heads breathe a little more.” 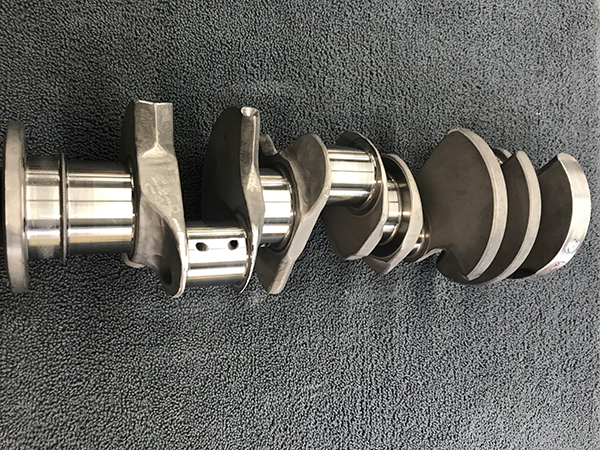 In total, Barna and his team at Valley Performance and Machine Service put a lot of work into this engine – to the tune of 300-400 hours.

“We built our own four-bolt caps and we put bay-to-bay breathing through the main tunnel,” he says. “We blocked off the whole cam tunnel in the engine so there’s no oil dripping on the crankshaft. We also built a custom deal so we can change the cam timing in 10 minutes.” 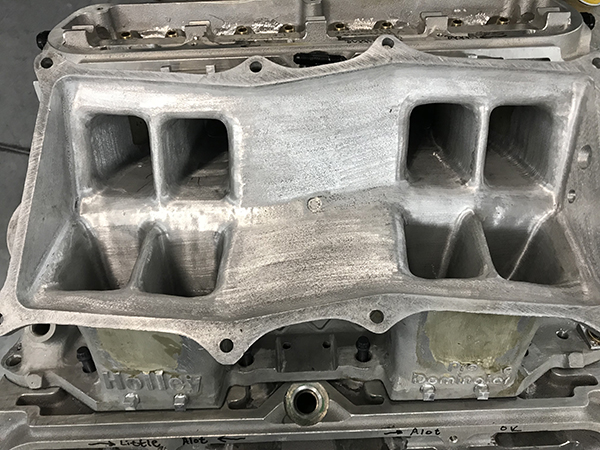 The ability to change cam timing quickly came in handy since competitors only had 35 minutes to make 10 pulls.

“We changed cam timing and we picked up 20-25 horse on the dyno,” Barna says.

The Edelbrock Victor cylinder heads also got plenty of attention. The shop had them on the flow bench roughly 30-40 times for performance tweaks. The shop also had to take a W2 tunnel ram and completely redo it to make it fit the Edelbrock heads. The foundation of the Mopar engine was a factory block, which made Valley Performance one of the few at the Race Engine Challenge to go that route. 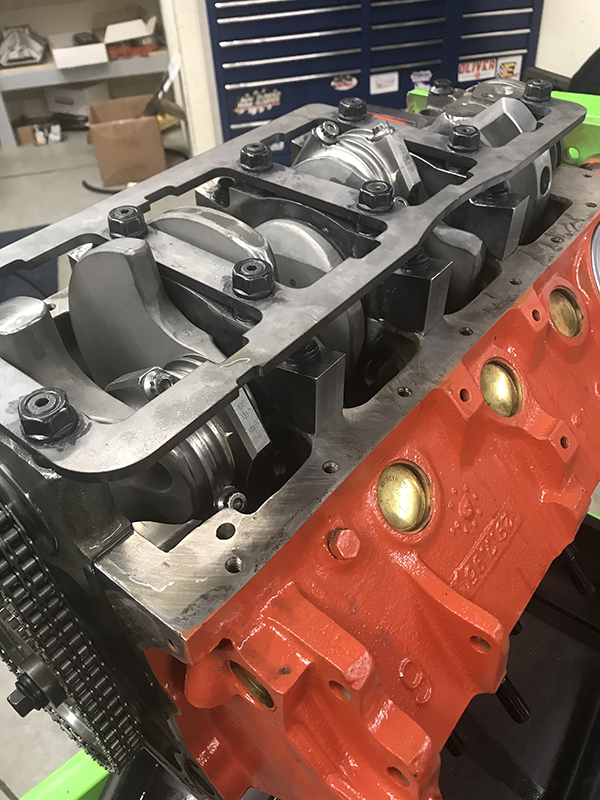 “We’re running a factory stock block that we had cryogenically treated, which made it 30 to 40 percent stronger than factory,” Barna says. “We’ve got a company in Grand Rapids, MI about a half hour from my shop that does the cryogenic stuff. I’m a believer in that stuff. We’ve been doing more and more of that lately.”

Aside from the block, Barna also had the Hughes rocker arms cryogenically treated, and would have had more parts treated, but came under a time crunch. 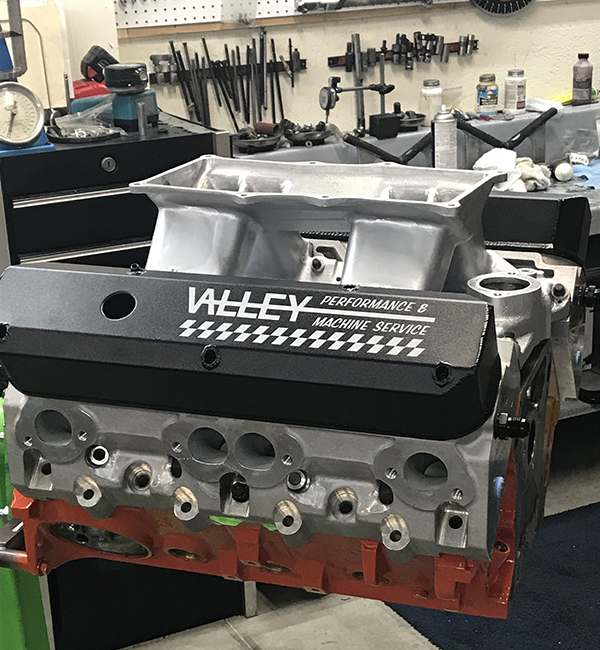 The engine also has a heat-treated Eagle crank and Eagle 6.250˝ H-beam rods in it. The stock stroke for the crankshaft is 3.58˝ and Barna de-stroked it to 3.558˝.

“We de-stroked it .022˝, and the main reason why we did that was to make the motor a little bit smaller and to put a Chevy 2.100˝ rod on the journal,” he says. “We used Ross pistons, which we actually had molds poured for here at the shop and sent them into Ross. The pistons are gas ported with a custom Total Seal ring pack to free up friction and try to get as much power out of this thing. We also used a Bullet camshaft that has a .775˝ lift and duration is .255˝ on the intake and .265˝ on the exhaust at .050˝. The rules were the max camshaft lift was .775˝.” 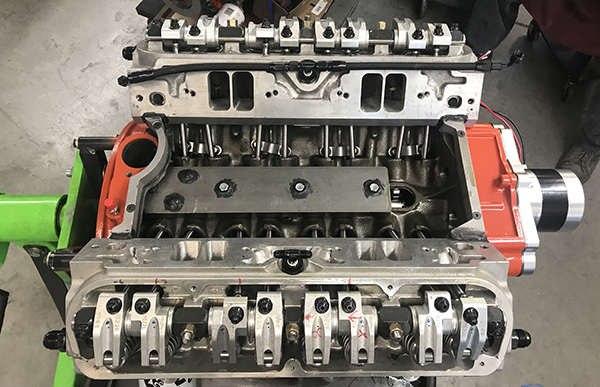 “At the Race Engine Challenge we made 737 horsepower,” Barna says. “Up here in Michigan we made a best 770 horsepower. When you’re on different dynos on different days stuff changes. Every dyno is different.” 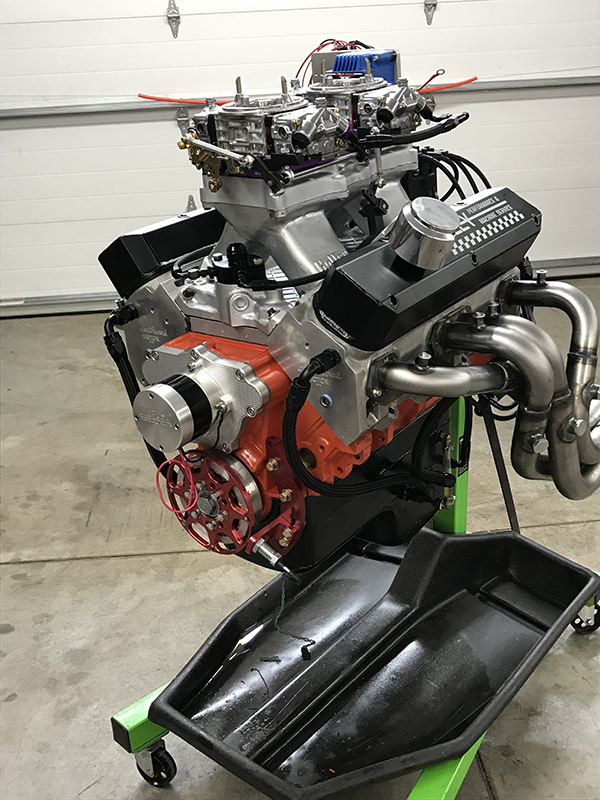 Despite the differences Barna experienced, his 376 cid Mopar served him well. Valley Performance and Machine Service took home first place in the inline valve class. Measuring horsepower per cubic inch, the shop actually came in second overall, regardless of class.

“We were just 1 hp behind the top guy in the Hemi class,” Barna says. “We were pretty proud of that as far as making top end power. We were almost 2:1 horsepower to cubic inch.” 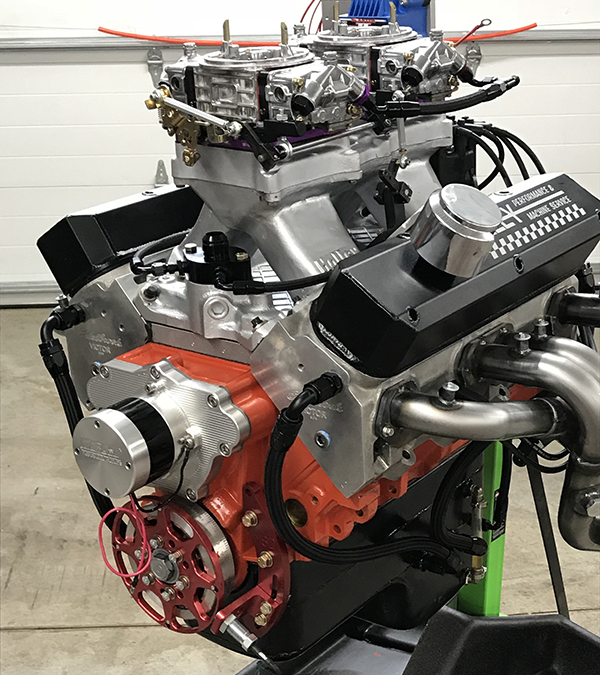