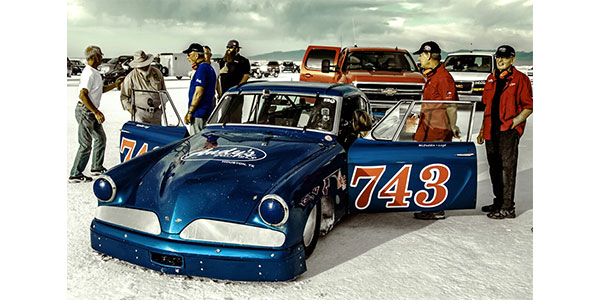 Speed Week this year is August 10-16, 2019. The date evokes a little anxiety for me…as I examine the “to do” list for both land speed cars, car carriers, tools, equipment and spare parts; I reflect back on the previous years that we have been running at Bonneville.

Speed Week this year is August 10-16, 2019. The date evokes a little anxiety for me…as I examine the “to do” list for both land speed cars, car carriers, tools, equipment and spare parts; I reflect back on the previous years that we have been running at Bonneville. It is expensive to build a land speed vehicle; transport and campaign to chase a record. Creativity and preparedness is essential toward reaching land speed goals. We do it because of our passion for speed, and for me, to become inducted into the 200 MPH Club and receive a coveted Red Hat

Running at Bonneville was a boyhood dream for me! The ambiance of the Salt and the history there before us, still gets me emotional. When I began to make my dreams of running at Bonneville a reality, I learned quickly that I had big dreams on a limited budget. I acquired a SCTA Rulebook and began building a vehicle to run on the Salt. At that time, due to finances, I had to invest a large amount of “sweat equity” and used parts and materials that I had on hand. I had engines, transmissions, rear ends and other parts left from previous builds that I used to build that land speed car. My desire to experience racing on the Salt is what inspired me to do so.

I am not a mechanic by trade, but a self-taught engine builder and I have been building engines and manual transmissions since I was 15 years old. That was in the late ‘60s. I did rely heavily on the “old timers” for guidance and most were helpful, whereas I was a nuisance to others. I had to learn how things worked, because I loved to street race and I broke a lot of parts.

I believe the early small block engines were quite “forgiving” and dependable up to a point. I learned that I could exceed its limitations very quickly. I used my engine building knowledge I had acquired over the years and applied it to an LS1 engine for my first Bonneville vehicle. It failed to produce the horsepower and durability needed to get close to my land speed goals, however. My ignorance cost me a lot of time and money, but my efforts were not wasted. Although I had exceeded the engine’s ability, I vowed to return with a better bullet!

I made the conscience decision then to have my engines professionally built. With my previous failed attempts, the realization came to me that I could save money, time and frustration, plus increase my chances of acquiring my dreams. I did have to swallow my pride, but it was the smartest decision I could have ever made for my Bonneville efforts.

In 2012, I teamed up with a friend that I had crewed for several seasons at Bonneville. We purchased a ‘98 Camaro and focused our efforts on an engine and researched the pending records we wished to attack. We built the car in my shop and reached out to Jim Gray to build an engine for our class selection. (Jim is now the engine builder running Bullet Racing Engines in House Springs, MO). After numerous inquiries, a plan was put into place to build a naturally aspirated LS 369 cubic inch engine from scratch. The engine build was highlighted in Engine Builder’s Engine of the Week and in the April 2019 issue. As of this writing, several unforeseen mechanical setbacks in other areas of our program have kept us from seeing the engine’s full potential, but we are again prepared to return to Bonneville this year to break some records. Stay tuned.

We also acquired a retired 1953 Studebaker Classic Altered that set several land speed records in the past. It had been in storage for several years. We spent a year prepping it for Bonneville. In my first outing piloting the car, I exceeded the existing 10-year record of 204.516mph and got us into Impound!

Unfortunately, the next day, I ran into engine issues and failed to back up my record run. Disappointed, but not deterred, we vowed to return with a better engine and finish what we started. We contacted Keith and Jeff Dorton with ASI Automotive Specialist in Concord, North Carolina to build a blown 259 cubic inch small block Chevy with mechanical fuel injection. The results were phenomenal! At Bonneville in 2017, I qualified for a record run on my first pass and backed it up the next morning for a new record (207.313) in its class!

My boyhood dreams to get inducted into the 200MPH Club and earn my Red Hat came to fruition! Having our power plants built by professionals was a very wise investment and a major asset to our success!

The Salt Makes Me Thirsty

Where Have All the Engine Parts Gone?
Connect with us