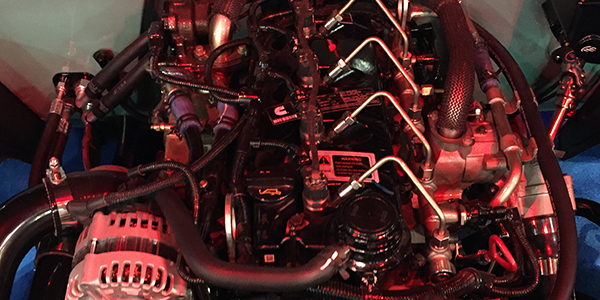 Like many of you who are into cars, trucks and engines, Johny G had a passion for automotive early on in life. It also didn’t hurt that his dad was a mechanic. Unfortunately, Johny’s dad passed away when Johny was just a young boy, but he left his garage full of tools to Johny, and his path to becoming a player in this industry was clear.

“My dad was a big car guy and Chevy guy, so building cars was in my blood,” Johny says. “I’ve been around it since I was really, really young. I was always a big fan of low riders and street trucks. I used to read all the magazines when I was young. I got my first car when I was 14, which was a ‘66 Impala, and I started tinkering with that. When I started working and making a little money, my tinkering progressed into the wheels, the suspension and the engine – the natural progression, I guess.”

That natural progression turned into Johny opening Johny’s Garage in Phoenix, AZ, as well as befriending others in the industry such as his buddy Kyle Oxberger, who owns Metalox Fab LLC. Kyle and Johny have teamed up in the past, but they recently got together to build a 1966 Chevy C10 truck.

The build took about six months. The classic 1966 Chevy C10 wears almost all of its original green-and-white paint scheme, the patina of which has been carefully preserved. The truck has a full TMI interior. It’s got Dakota Digital gauges. The bed floor was raised, and a company called Mar-K did the wood bed strips. Kyle stretched the fenders and pancaked them.

“It’s got a lot of custom stuff that just by looking at it you wouldn’t know,” Johny says.

“We have used United Pacific parts for years, because they offer a variety of needed items for any C10 truck, and the sheet metal parts are very high quality,” Johny says. “They’ve anticipated the new parts builders and restorers need.”

In addition to the aesthetics of the truck, the engine was of course a big topic of conversation. According to Johny, the customer initially wanted an LS engine in it, which is Johny’s specialty. However, the customer ultimately decided to go a different direction.

“The customer is a heavy-equipment repair guy and he works around diesels, so he had seen the Cummins 2.8 and wanted to know if we could put that engine in the truck,” he says. “My background is LS and I’m an LS guy. For me, this was a new challenge, but I wanted to figure it out and try it, so I said, ‘Sure, let’s do it.’”

“The nice thing with the diesel is you just have a single exhaust, so you just have one pipe on one side,” he says. “With the V8, you have the two pipes you have to fish through the frame and everything else. Also, the diesel engine gives you so much more room for the steering shaft to the rack. The intercooler and all the piping is actually behind the original front grill, which keeps the engine bay pretty clean. The fit of the Cummins in the C10 almost seems like it was meant to be.”

In fact, according to Johny, the Cummins R2.8 turbo diesel fit the truck easier than an LS would have.

“I’d say the diesel engine was a little simpler than doing the LS engine,” he says. “Kyle fabbed up some custom motor mounts to fit in the chassis. We pieced together intercooler piping and radiator hoses, and all that universal stuff we had to fit. All in all, it came out like it should fit in there.”

Now that this 1966 Chevy C10 has restored life and a Cummins R2.8 engine breathing 161 hp and 310 ft.-lbs. of torque through it, Johny and Kyle are curious to see how the truck performs.

“It’s a different powerband obviously from a gasoline engine,” Johny says. “It’s only got about 5 miles on it, so when we get home we’re going to see what it really does.”