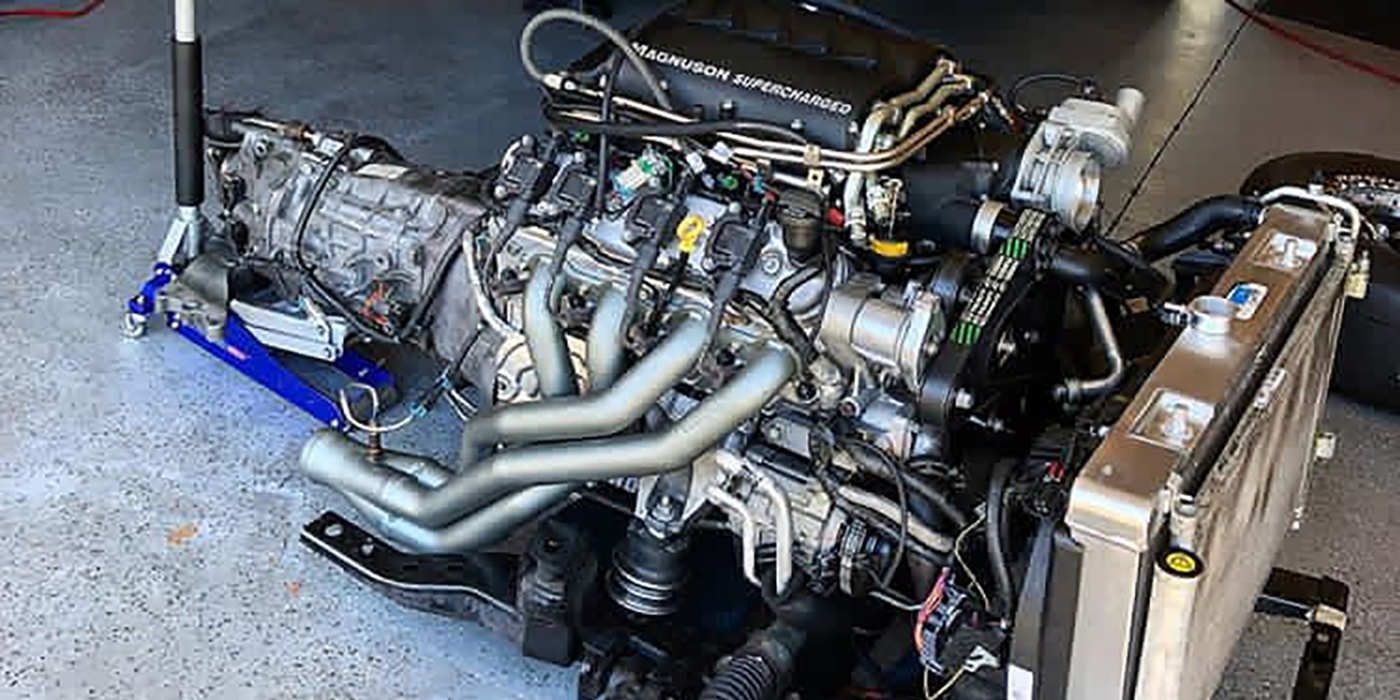 Here’s a list of the main players and a quick rundown of GM’s transmission timeline, all suitable for an LS engine.

It’s safe to say we’re all familiar with an LS swap. At least the idea of it. First showing up between the fenders in the late ‘90s, GM’s popular LS-based small block engine was an immediate success and has been the hot ticket for hot rodders for well over a decade, with its popularity continuously rising.

Originally designated for the 1997 Corvette, there have been many different versions of the Gen III small block since. Engine codes and specifications run into the dozens, with a few super-hot and pricey versions that can be found.

Regardless of the version you get, there’s an abundance of LS-equipped cars and trucks ripe for the picking, partially lending to the popularity of it, so whichever engine you are looking for, it’s usually pretty easy to find.

More often, however, the question is not about the engine, but what transmission can be used. Overall, there’s not that many choices, but GM began to stir the pot in the ‘70s with change looming on the automobile horizon, and by the time the ‘80s were rolling into the ‘90s, transmission technology was changing rapidly, bringing with it everything from name changes to entirely new units.

Before we shift gears into what fits and what doesn’t, here’s a list of the main players and a quick rundown of GM’s transmission timeline.

From 1950 to 1973, the two-speed Powerglide, or “Glide” as it’s known to some, could be described in the same number of words as speeds, strong and simple. It proved its strength and durability on the road and on the track, and the fact that it only shifted once was a key to its long time racing popularity. Over time, the demand for a three-speed automatic overran its popularity and the factory applications dwindled to 4- and 6-cylinder cars until it was replaced by the Turbo Hydramatic 250, which we’ll tie into later.

This popular and well-known transmission was first used in 1964. The THM400 was a three-speed unit with tough construction, which not only propelled its success for commercial and heavy truck use, but gained it a spot as the only option for an automatic when big inches and big power were checked off on the order slip at the height of the muscle car era.

In 1987, the THM400 was renamed the 3L80 to match GM’s new naming convention, indicating three forward speeds, longitudal mounting and a “relative torque” value of 80. This transmission was installed in new vehicles up until 1990.

The THM350 arrived in 1969 as a lighter-duty version three speed for the GM line. While it was wasn’t the heavy-duty THM400, it proved to be a dependable transmission that is still widely used and modified to this day to handle some impressive horsepower numbers. The THM350 and the THM350-C (a 1981 introduced version with a lock-up convertor), saw production until 1984 when it was replaced by the 700R4.

The THM 250 (here’s the tie-in we promised), was introduced in 1974 as a replacement for the Powerglide. It was essentially a THM350, but a lighter-duty version for smaller displacement engine applications.

The 4L80E was introduced in 1991. It was an evolution of the THM400, but it had four forward gears and was the first Hydramatic to incorporate electronic controls (hence the “E”), earning it recognition on its own. The 4L85E is a heavy-duty version of the 4L80.

The 700R4 was introduced in 1982, eventually to phase out the THM350 by 1984. It was one of GM’s Turbo Hydramatic transmissions, but with four forward gears. It too, like others, was renamed in 1990 to match the new GM naming convention and called the 4L60. In 1990, the 4L60 was still hydraulically shifted based on governor pressure and throttle position, but in 1992 it evolved to electronic shifting and became, you guessed it, the 4L60E.

Additional versions include the 4L65E, a heavier-duty evolution of the family and the 4L70E, which is the same as the 4L65E, but with a speed sensor in the pump.

The 200-4R, another in the line of GM Turbo Hydramatic transmissions, came from the THM200, which was a light-duty version (lighter-weight materials included) of the THM 350, introduced in 1973 in an effort to improve fuel economy.

The THM200 saw common failures, especially with larger engines. In 1981, the failure-prone components were improved upon and a fourth gear was added, evolving the line into the 200-4R, which saw use in vehicles such as the Buick Grand National and Pontiac Trans-Am.

The 200-4R was also phased out by the 700R4, but it is a unit that can be built tough and is a great option for cars that originally came with a THM350 or Powerglide.

Which ones work with an LS?

Luckily, with the development of the LS series small block engine ultimately being an evolution of the Gen 1 small block, certain things were kept the same, and thanks to forward thinking of GM engineers, the overall bolt pattern for the transmission bellhousing remained the same, meaning all of the old “tried and true” GM transmissions will physically bolt up to an LS.

This makes it easy, but also opens the door to mistakes because there are some differences. When selecting a transmission, the first option to consider is the transmission from the LS-donor, but it might not be what you want in the car, simply doesn’t fit the car, or the engine has been bought as a stand-alone.

This is a common dilemma when performing an LS swap on an old muscle car, with the goal of getting the power, driveability and dependability of the engine, but retaining the feel and fit of a period-correct type of transmission.

The easy part is they will all fit. The LS engine retained the same bolt pattern that the Gen1 small block Chevy had from 1955 with the exception of one bolt hole, which would have interfered with a cylinder, so it was left out and that hole is just not used.

The problem mating an older transmission to the LS engine is the length of the crank flange on the back of the engine.

These are common aftermarket pieces and some companies also make custom torque converters that bolt right up to the stock LS flexplate and work with an older transmission.

The only exception falls with some 1999-2000 6.0L engines in full-size trucks. If they were equipped with a 4L80E, they have a .400˝ extended crankshaft to work with it, so any of the older transmissions will bolt right up.

More about the 4L60E

Up until now, we’ve focused on the older transmissions that will work, and much of the decision will be based on what you are building, how the transmission fits in the car, and also what you may already have to use.

One of the most common transmissions for an LS swap is the 4L60E, and for a few reasons. It’s a proven strong and dependable transmission and it’s also what came as the original automatic transmission backing up a good majority of LS engines out there. If you find a donor vehicle with both, your job just got a lot easier. Another good point of the 4L60E is that since it’s an evolution of the 700R4, it will fit well in the majority of old cars without any modification.

The important thing not to overlook is that the 4L60E has been around a lot longer than the LS and there are a number of different versions, meaning every 4L60E is not an immediate fit to an LS. Over the years, there were changes with the case as well as some of the controls, so it is very important to utilize the transmission codes and know exactly what you have before putting it to use.

There are primarily three different versions that best indicate the differences in evolution.

The first version 4L60E, built from 1993 to 1997 has a one-piece case and looks the most like an older GM transmission. There are a few differences within this version, and most had an ID tag on the bellhousing, but if it is missing as they frequently are, the ID information is stamped in the case on the PS rear, just above the pan rail. These first version units, since they would have backed up a Gen 1 engine, fall under the same fit requirements of any of the old transmissions.

The second version 4L60E, built from 1996-1999, has a bolt-on bell housing, a stronger extension housing and a deeper fluid pan. The bolt-on bell housing allowed the transmission to be used in a wide variety of applications, making identification even more important. If the decal is missing on these, the information is stamped on the bottom of the case, just forward of the tail housing.

The third version of the 4L60E, released in the late ‘90s, has a deeper bellhousing to accommodate a longer input shaft and a larger torque converter that was used with the introduction of the LS series engine.

The bottom line, if you don’t know the original application of your 4L60E, it is important to find the code and look it up so you know what you are dealing with and when it comes to service, many of the components including the filter, can differ.

The controls are another factor, and it’s as important with an older transmission as it is with a newer unit. Be it throttle pressure, vacuum, or electronic, proper adjustment or set up is critical. With some of the subtle differences in the electronics of the 4L60E, not knowing the application could throw you into a mess of wiring harness modifications, so be prepared.

We might dig deeper into the controls in a future issue, and if you’re wondering about some of the GM 6-speed transmissions, they’re an option too, so we’ll have plenty to talk about down the road. Just as LS engine parts are easily found, so too are the transmissions to complete your builds. EB

Advertisement
In this article:LS Engines, transmissions