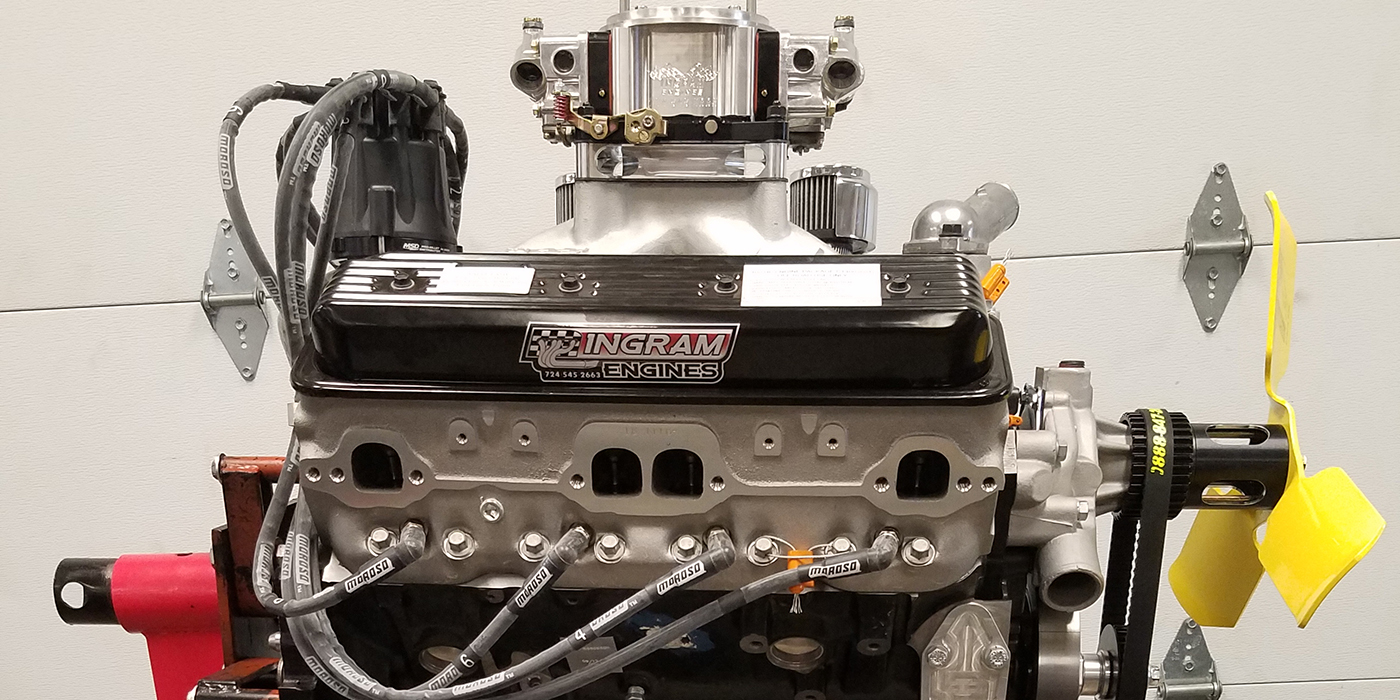 These GM 604 and 602 crate engines have found favor with some racers, and just as with any engine, they do wear out and break. There is a need for shops that can rebuild these engines.

These GM 604 and 602 crate engines have found favor with some racers, and just as with any engine, they do wear out and break. There is a need for shops that can rebuild these engines. Two such shops are Hendren Racing Engines in Rutherfordton, NC and Ingram Engines in Kittanning, PA. Each of these shops have made crate engines the primary business.

The original business was founded in 1976 in Santa Cruz, CA, where the Hendren’s race shop and speed shop focused on circle track, dirt track, drag race and offshore marine engine work and parts. By the mid-‘90s, a bad economy and the fact that much of the shop’s business was coming from the East coast, prompted Bill Hendren to move the business to North Carolina in 1995.

“When we moved to North Carolina, we were building dirt late model, super late model engines and limited late model engines as well as some drag race stuff,” Hendren says. “Around 2004, several racing series started introducing the GM crate engine and my dad recognized that was the way racing was going to start trending, so we started getting into that and became authorized builders to do all the crate engine stuff. We’ve done that almost exclusively since about 2010.”

Ingram Engines is also a family run shop. Every year, Ingram Engines pumps out an average of 130 engines. Of those 130 engines, nearly 100 of them are GM 604 engines built for racing series.

“We do so many GM 604 engines because it’s what we specialize in,” says Michael Ingram, owner of Ingram Engines. “Although it’s a crate engine, it has to fall within certain tolerances and specifications before that engine goes out the door.”

The Hendren’s also build around 100 GM 604 engines each year and agree that there are a number of processes an engine builder can perform to make the 604 even better than it is from the crate.

“Not only do we freshen and rebuild them for people, but we’ll take brand new 604s out of the box, completely disassemble them and re-machine the entire engine per the GM specs,” Hendren says. “What we’re doing is what GM can’t do as far as being a production line-built engine and we’re making them all equal.”

According to Steve, because they’re production line-built engines, you see stacked tolerances all the time and you see tolerances out of spec. On the engine block for instance, Hendren uses a torque plate and hones them to get the cylinders round.

“Somehow, GM manages to make square bores, but that’s another story,” he says. “We line hone and deck the block to within spec. As far as the cylinder heads go, I’ve got a Newen BB2 CNC machine and we do all our valve jobs on that. We correct the valve job and get the combustion chamber volume correct.”

Ingram sees similar issues with the 604s from the crate, saying there is quite a bit of work that goes into making one race-ready. The guidelines for the engines differ depending on the sanctioning bodies involved, but in most cases, the crank can be ground, the block can be decked, a valve job can be done, and as small as 60cc cylinder heads can be used. The sanctioning bodies even give a certain installed height on valve springs.

“The next thing is honing it and getting the cylinders good and round and getting the correct finish on them for correct ring seal. Once we get the deck height done and the block honed, then the biggest thing is checking the rod housings. We will size those if needed.

“Depending on the sanctioning body, we can also grind the crankshaft .01˝, grind the rods .01˝ and the mains .01˝. That’s the maximum we’re allowed to go on the crank. From there we will mag the crank to make sure it is straight. We will check all the bearing clearances and get it together, and we are good to go on the short block.”

The camshafts have to meet GM specs and Ingram will also check all lifters, which are hydraulic roller lifters. Then they’ll get into cylinder head work.

Ingram Engines will cc all intake runners in order to meet certain specifications and fall between the minimum and maximum. The shop will also cc all combustion chambers. Another area they’ll check is the installed height on the spring since those can’t go below 1.780˝.

“You’ve got to make sure of these measurements because [sanctioning bodies] check this stuff at the racetrack all the time,” Ingram says. “They’ll check installed height on springs. They’ll pull springs off to check poundage. They can even profile the camshaft at the racetrack by pulling a distributor out and actually running it on a cam profiler.”

Due to the rules of the racing series these engines run in, internal parts for the 604s must be from GM.

“These engines have to remain 100% GM,” Hendren says. “Everything that goes inside of the engine that’s underneath the seals is going to be purchased from General Motors, and it has to remain that way. Otherwise, it would be an illegal engine and we don’t do illegal engines. Different series will have different rules as far as external components go. We work with different manufacturers to produce those components such as Pro Fabrication on headers, Willy’s or David Smith for carburetors, and we also build our own stuff. We use high-velocity head spacer plates and we use Jones Racing Products or KRC front drives and water pumps.”

“We’ve got a Dyno Jet chassis dyno in-house, and we constantly are testing new products, new fuels, new headers – anything that’s made for these engines we’re constantly testing,” he says. “We’ve got our own house car, so that allows us to find what’s best.

“They call it a torque booster, but that’s our design,” Hendren says. “On 604 crate engines, those will pick up an average of about 25 ft.-lbs. of torque between 2,500 and 4,500 rpm just by bolting them on. For open motors, it’s an even bigger number than that.”

It’s clear there is plenty of things for an engine builder to do. However, not overlooking what is the most important part of building a GM 604 engine – following the rules. What’s the penalty for failing to meet the required measurements or criteria? It often results in disqualification from the race for the driver, and possible banishment from the racing series for the engine builder. The stakes are high!

For a sanctioned engine, builders are required to use seal tags so officials know who built and worked on that particular engine. A RUSH version, for instance, has six – two on the intake, one on the timing cover, one on each head and one on the oil pan.

“Those tags will correspond with the engine builder,” Ingram says. “They can scan that tag, which has a QR code on it and a BCN number on the block so they can track down who built that engine. If a sanctioning body confiscates that engine or somebody protests it, it better be what it’s supposed to be. If not, then basically you’re thrown out for life as an engine builder.

If it’s an unsanctioned racetrack that allows you to put aftermarket parts in, they don’t get into it in depth like that.”

If Ingram builds a 604 engine for an unsanctioned event or what he calls an “open” motor, the engines can get some aftermarket treatment. Ingram typically turns to Clevite, Federal-Mogul or King for engine bearings, Eagle, Scat or Lunati for crankshafts, Eagle or Scat for connecting rods, Mahle or SRP for pistons, Bullet camshafts, and Melling oil pumps.

“For gaskets on the open stuff, we favor Cometic on about everything,” he says. “We also use a lot of PAC components for springs, retainers and locks, and Ferrea for valves. Everything else is OEM or GM.”

For the sanctioned events, the GM 604s usually have a compression ratio of 9:1-9.5:1 and run on oxygenated race gas or e85 to the tune of 410-420 horsepower and about the same in torque numbers. Each engine is typically within 5 or 6 horsepower of one another when they are race-ready.

“Last year we had over 200 feature wins and 8-10 track championships,” Ingram says. “I don’t get into playing the dyno number. I look at the scoreboard at the end of the night.”

Shops like Hendren Racing Engines and Ingram Engines are certainly using the crate craze to their advantage. The question for all engine builders remains – to crate, or not to crate? Nothing’s going to change if you don’t explore the potential. The opportunities are there and based on what some others are doing, there’s certainly demand. EB