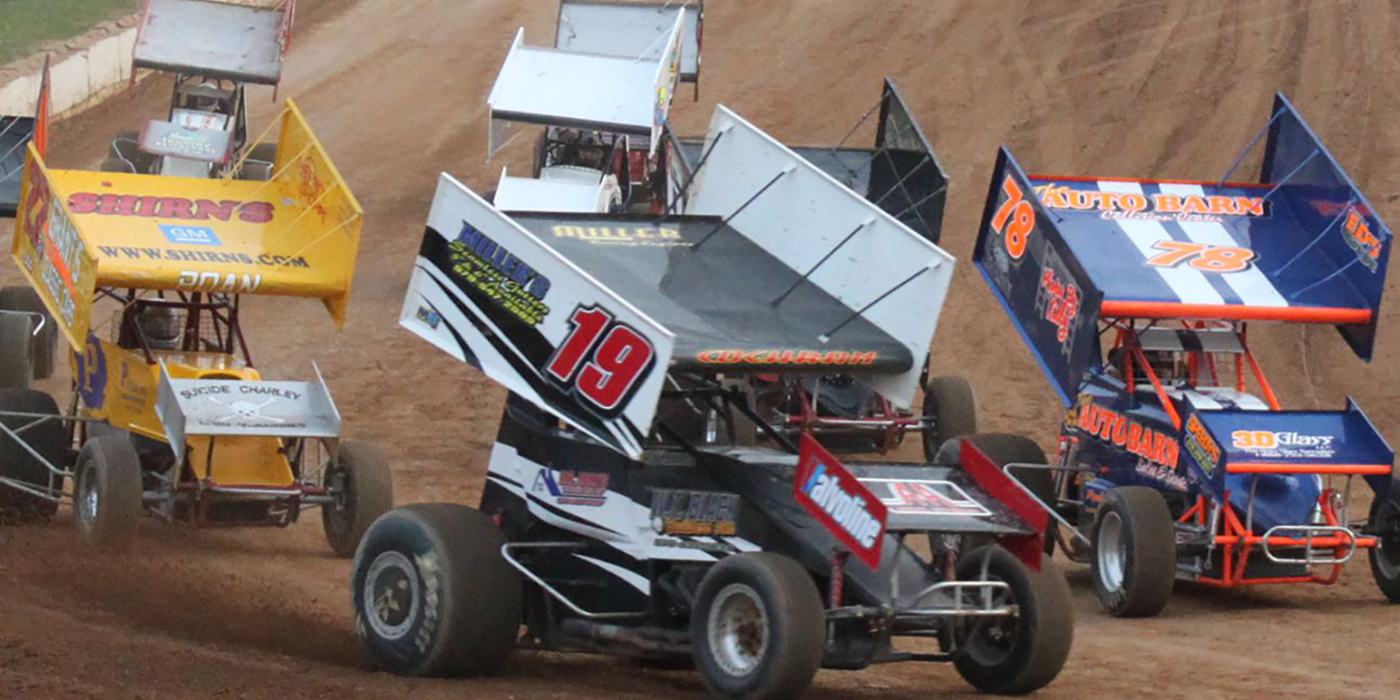 Sprint Cars are exciting to watch and even more exciting to drive, but, like most other forms of racing, the costs to run a competitive car have ballooned in recent years.

Pound-for-pound, Sprint Cars are among the most powerful race cars on the planet. Weighing just over 1,400 lbs. with engine and driver, Sprint Cars are as close as you can get to strapping 900 hp between your legs. Drivers sit on the driveline and straddle the engine. If that doesn’t get you excited about this racing series, I don’t know what else would.

Sprint Cars are exciting to watch and even more exciting to drive, but, like most other forms of racing, the costs to run a competitive car have ballooned in recent years, especially at the national level.

According to the National Speedway Directory (NSD), there are about 900 oval tracks in the U.S., with nearly 700 being dirt tracks and the rest being asphalt tracks. Track lengths vary from short 1/8-, 1/4- and 1/3-mile ovals, to longer 1/2-mile and 1-mile venues. NSD listed 1,374 race tracks in the U.S. and Canada back in 2011 and said there were more than 2,500 race events held at these facilities. The majority of the tracks run local short track and open-wheel (Sprint Cars or Midget) races. With that said, there’s plenty of “meat on the bone” for builders who want to service this market. Sprint Car engine builders rebuild everything from 410s to 305s to mini-sprint motorcycle-based engines.

Let’s start with the standard-bearer 410 Sprint Car engine, which has been a mainstay in this form of racing for decades. It is based on a small-block Chevy using an aluminum block. Most builders of these engines use an aftermarket block such as Donovans, Dart, and others.

Aftermarket blocks offer several advantages, including priority main oiling setups, which will help the valvetrain survive the punishment. Many of these engines use needle-bearing camshafts, so the oiling is really for the valvetrain and main bearings.

The valvetrain on the modern Sprint Car engine is a stock layout consisting of a single OHV cam with 16 pushrods that open 16 valves with stock mounted rocker arms. Despite the stock mounting points, the engines today rev higher and produce more horsepower due to improved manufacturing techniques and the use of lighter alloys such as titanium. Some tracks allow the use of roller lifters and rockers with titanium valves to reduce weight and improve the life of the components.

A typical Sprint Car engine rebuild can take up to 40 hours to complete, following various inspections and machining processes. “The first thing we do when an engine comes in for a rebuild is hot water pressure test them, which is pretty unique,” says Paul Kistler, owner of Kistler Engines. After that, he says the engines are disassembled and the block is honed and line honed. “We do a full valve job, and we clean everything up to be put back together. Everything gets magnafluxed. We do everything for the engine in-house except for crank grinding and camshaft grinding.”

When everything is finished on a 410 rebuild, Kistler says their engines put out somewhere around 700 ft.-lbs. of torque and 880-900 hp with a compression ratio around 16:1 running methanol fuel. Some builders have run as high as 18:1, but the engine won’t live as long.

The 410 puts out plenty of power. The challenge is getting it to the ground as Sprint Cars are like monsters fighting traction all the way around the track. The suspension and gearbox are straightforward. Sprint Cars don’t even have on-board starters. The battery is just big enough to power the magneto-style distributor.

The engine is Ford’s answer to the 410, which at this point is too new to determine how it may perform in other series with different drivers other than Stewart. But it is an option that could find its way to engine shops in the future.

“We thoroughly dyno tested the engine at multiple phases to make sure that both performance and durability were where we wanted them,” says Christian Hertrich, motorsports powertrain supervisor, Ford Performance. “We didn’t have the opportunity to test it in a car until September, because you need to have that real-world data to understand how it’s functioning. It just so happened that the first on-track test was an actual race.

Stewart says the development of the new Ford engine is promising, with the hope that it may become part of a customer program soon.

“The goal of this engine program is to be able to introduce the FPS 410 engine to the Sprint Car community by this time next year,” Stewart says. “I know we have a powerplant that will immediately challenge for wins across many tracks and series.”

The American Sprint Car Series (ASCS) is the largest Sprint Car sanctioning body in the world. With the Lucas Oil National Series backed by numerous regional events throughout the country, the 360 cid sprint car engine is a very capable mill that can put out more than 700 hp and close to 600 lb.-ft. of torque. On most race tracks, the power in these cars makes them capable of reaching 120+ mph.

The 360 engine package was originally intended to curb costs compared to the bigger 410s. However, the cost savings is not that much when some are spending $45,000 to $55,000 for a new 360 with high-end components. Some builders, such as Salina Engine in Salina, KS, offer a base 360 package that brings the price closer to $35,000 for a reliable combination.

Salina Engine offers packages that go above the base models, which are geared more toward professional race teams. However, they say their base package will compete on most dirt tracks right alongside the higher-priced engines.

Salina has specific modifications they perform on every ASCS engine to help aid in cooling and water flow. They also verify the valve guide clearance. Typically they are on the high side of what some other builders say is acceptable. Still, Salina says the extra clearance does not cause any noticeable issues and reduces the likelihood of valve stem galling. After these are done, they check the concentricity of the valve job on any newly CNC’d heads.

According to Salina Engine’s Adam Cofer, who has spent a majority of his career building and working on 360 and 305 Sprint Car engines, the 360 needs a minimum of 14.5:1 compression to be at the power level they consider acceptable. He says with methanol, they can tolerate higher ratios, but going too far beyond that isn’t worth it.

The 360 engine is a popular Sprint Car mill with just enough power to handle the downforce (and drag) created by a wing. The 360 can be offered in different packages for different budgets and typically won’t require as many teardowns during the season as a 410. It is also easier on the right rear tires, which are not inexpensive either.

The Racesaver 305 class is, essentially, what the 360 class was supposed to be in the beginning. Some racers call them Econo Sprint Cars or the beginner class. It has become quite popular all over the country based on a GM 305 block with spec heads from Brodix. The rules call for flat top pistons, stock rods and wet sump oiling, which typically produces around 450 hp.

Race engine builders found out this class had a lot of potential as the series grew in popularity. Parts suppliers offer rotating assemblies, short blocks and other kits to make the engines reasonable for your Sprint Car clients, while also not falling into the crate motor territory. The trend toward “crate” motors has cut many engine builders out of the game in the name of reducing costs. Racers will find ways to spend it in other areas from what we’ve seen. The good news about the Racesaver 305 is that aftermarket parts and engine building expertise is still needed and welcomed. Some racers may wish to do the assembly at first, but chances are you’ll get that business after they make a few mistakes that bite the wallet.

According to some Sprint Car engine builders, it’s not easy to find good 305 Chevy cores these days. Many engine builders are now using an aftermarket 305 block from companies such as Dart. They are more expensive, of course, but stronger and will last for many seasons with proper care. And in the right trim, the 305 is capable of nearly 500 horsepower running compression ratios of around 11:1.

While Racesaver 305 engine rules are the most prevalent for this class across the country, some tracks adopt their own rules, which can make traveling to different regions a challenge. And some places still use carburetors where rules allow. These engines can run a complete season if maintenance is kept up, and for a much lower cost than any of the other Sprint Car classes. When the economy pushes guys out of top-level classes, the 305 class is a way to stay in the game and have fun without breaking the bank. EB