Sprint Cars are just about the fastest machines in racing, often running two or three seconds faster per lap than late model stock cars. There’s no time to just tool around in this form of racing, no pit stops, and it’s over before you know it.

Everything is to the limit with engines pushing between 8,000-9,000 rpm, with brutal compression ratios, fuel injection, dry sump oiling systems, alcohol fuel and lightweight parts all pushed to the hilt for the highest possible horsepower and torque.

The engines don’t have to last long, but with the stress they endure, it’s a challenge to keep them in one piece. These engines are a rare breed with many considerations that “normal race engines” don’t have to face.

Sprint car racing is more of a regional type of racing with hotbeds of activity across the nation. One would certainly have to agree that northwestern Ohio is one of those hotbeds in a number of ways.

First, the area supports all types of sprint racing including 410, 360 and 305-powered sprinters in both winged and non-winged configurations, and on both pavement and dirt. In addition, there are a number of tracks that provide venues for them to race.

They include Attica, Fremont, Millstream, Waynesfield and Limaland dirt tracks, along with the paved Sandusky track. Not too far to the south is Tony Stewart’s famous Eldora Speedway dirt track and the legendary paved Winchester (IN) Speedway.

Some of these tracks support weekly sprint series with cars using two of the three engine displacements. And on occasion, there have been special events with all three powerplants in action.

Also in the area through the years there have been visits of national sprint car touring series like the World of Outlaws (WoO), All Star Circuit of Champions (ASCoC) and the the non-wing sprints of the United States Auto Club (USAC).

To support this vigorous activity there are a number of significant sprint car engine builders who can provide top engines of all three displacements. The four engine builders covered in this article are all located in the general area of the afore-mentioned racetracks.

There are great similarities among these builders in their method of engine build-up, and their close working relationships with customers. They are also all on surprisingly good terms with each other.

Building a sprint car engine for a high-powered winged sprint requires durability and strength far beyond those for non-wing low-drag sprint cars.

One interesting similarity with these builders is the choice of aftermarket parts they employ in their 410 and 360 engine build-ups. The same brand names seemed to keep coming up from the builders. For example, Dyer and Carillo Rods; Callies and Bryant Cranks; Brodix and All-Pro Heads; Huggins, Crane and Erson Cams, and Engler and Kinsler injection systems are the likely choices.

Although it might seem that there wouldn’t be much difference between the three sprint engine sizes, that would be an erroneous assumption. Following are the hows and whys of these killer engines from the builders themselves.

Of course, the 410 cid all-aluminum engines are called upon to provide the greatest power, sometimes approaching 900 hp. The stress on these engines, when mounted in winged sprinters (on either dirt or pavement) is a huge drag. All the builders agreed that removing that wing provides much longer life to the engine.

The winged cars are the most numerous in this area and durability for these engines is a major consideration for these builders. One thing that was unanimous among the builders was that the valve train was the weak link in the powerplant.

Gary Griffith of Griff’s says “I have had particular trouble with the roller lifters, but I have turned to bigger diameter lifters to address the problem.”

The 410s in wing cars usually have to be torn down after a specified number of races, Dennis Level of Level Performance explains, “It’s not unusual to find a bent crank, burned bearings and often the need for new pistons and rods. This job could run as high as $7,000 for us and we recommend doing it at 20 races at the latest.”

Scott Gressman, Gressman Powersports,  adds “After five or six races, the engines get a lot of dirt in them and could lose as much as 50 horsepower.”

Kistler notes, “The only difference between 410s for dirt or pavement is the oil pan size due to the lower stance of the pavement car.”

And from that dirt track point-of-view, Griffith explains the power-versus-torque consideration with the engine. “Remember, it’s the torque that moves the car out of the corner.” Kistler says he thinks it’s a 50/50 deal and that the driver’s style often comes into play.

Kistler continues, “With today’s engines, the torque comes from the injection system and not the cam as used to be the case.”

Gressman says he watches where the max torque occurs on his 410s, but like Griffith, Scott thinks the driver’s style and preferences are still the key and has to be considered in sprint engine design.

Griffith points to the fact that the 410 non-wing cars actually need less raw torque. “The winged cars need it because the wing has the cars locked down to the track.” Level pointed out that, “We work a lot on the low-end torque which has to be smooth in the powerband.”

There is general agreement on the practical compression ratio limits for the all-aluminum 410 engines. All agree that 16:1 was a reasonable limit. Kistler explains, “I once had it up to about 18:1, but decided to back off to the lower figure.”

All the builders agree that it’s possible to build up more power, but is it really needed? Level explained, “The World of Outlaws always tell you that they need more power. But there comes a point where the car set-up and the driver are more important.”

One step below the top-gun 410s are the more-numerous 360 engines which use steel blocks and aluminum heads. It would seem that these engines would be somewhat cheaper than the 410s, but it’s not as much as you might think being in the range of $5K-to-$10K less.

Gressman explains: “One advantage with these smaller-displacement engines is that you can save about $3,000 with the steel block and four thousand on the 23-degree heads.”

The cost of these engines might have started considerably less than the 410s. but that’s not the case today. That situation is because most 360 engines use many of the same high-buck parts and systems as the 410s.

For example, the oiling system, ignition, rods, crank, and mag among other components are the same. In addition, the compression ratio of these engines is just a point or two below that of the 410 engines. In fact, Griffith says that his 360s contained about 80 percent 410 componentry.

The 360 engine, however, remains a popular choice with the low-buck racers on smaller tracks where there is enough power (usually in the 600-650 horse range) to pull that big wing and be rewarded by its downforce capabilities.

The advantages of this powerplant, pushing against reduced drag, doesn’t require nearly as many teardowns during the season. It also goes without saying that the engine is also easier on the right rear tires.

It’s interesting that in some 410 races on shorter tracks, as much as half the field sometimes might be  using 360 engines. Quite frankly, the 360 has the best performance curve because the driver can hold the throttle down all the way around where the 410s have to brake for the turns.

The most recent of the sprint car engine sizes is the smallest 305 version. It was initiated in the 1980s as a way to greatly reduce the cost of sprint car racing and to also serve as a learning tool for new sprint car drivers. It initially carried the appropriate name of “Econo-Sprints.”

When it started, all the intentions were good. A high percentage of the early 305 GM steel blocks came from junk yards and it wasn’t surprising to see five-year-and-older chassis out there competing.

Griffith says the first 305 engines actually had batteries and distributors. It was really possible to go racing for only $15,000.

But like any type of racing, there were calls for more performance, and the ability to race for that low figure went away. The rules started allowing high-tech, high-cost parts that kept raising costs.

Gressman says it’s getting very tough to find those old 305 Chevy blocks. “So today, there is talk of an aftermarket 305 block that would be stronger, but more expensive. The engines are capable of about 500 horsepower. The compression ratios of these engines top out at about 11:1.

Level adds, “The tracks and traveling series for the 305 cars have different engine rules and they all need to get the rules the same. That also adds to the cost.”

There is also an interesting characteristic about the 305-powered sprints as a number of budget-conscious teams still use carburetors where rules allow! 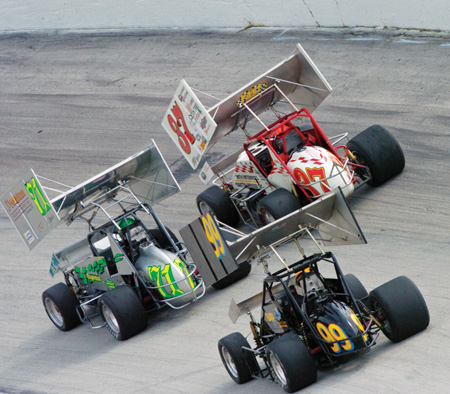 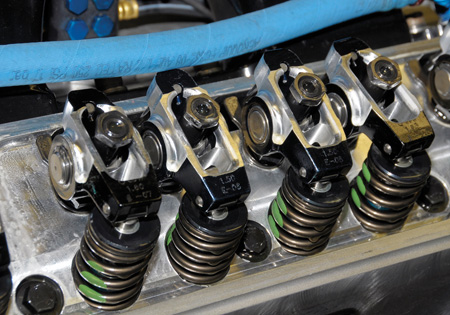 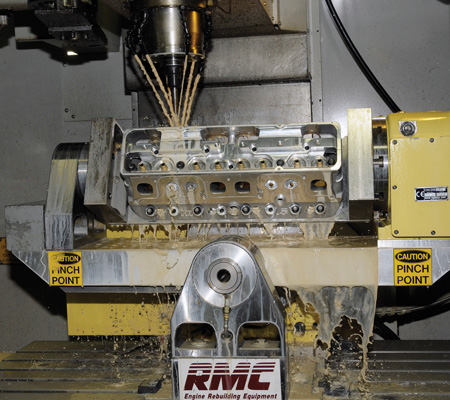 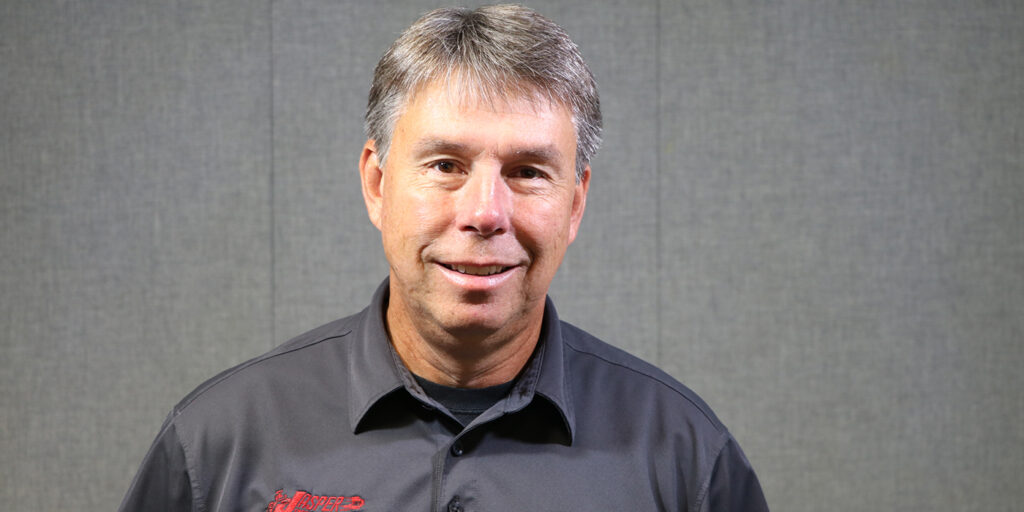