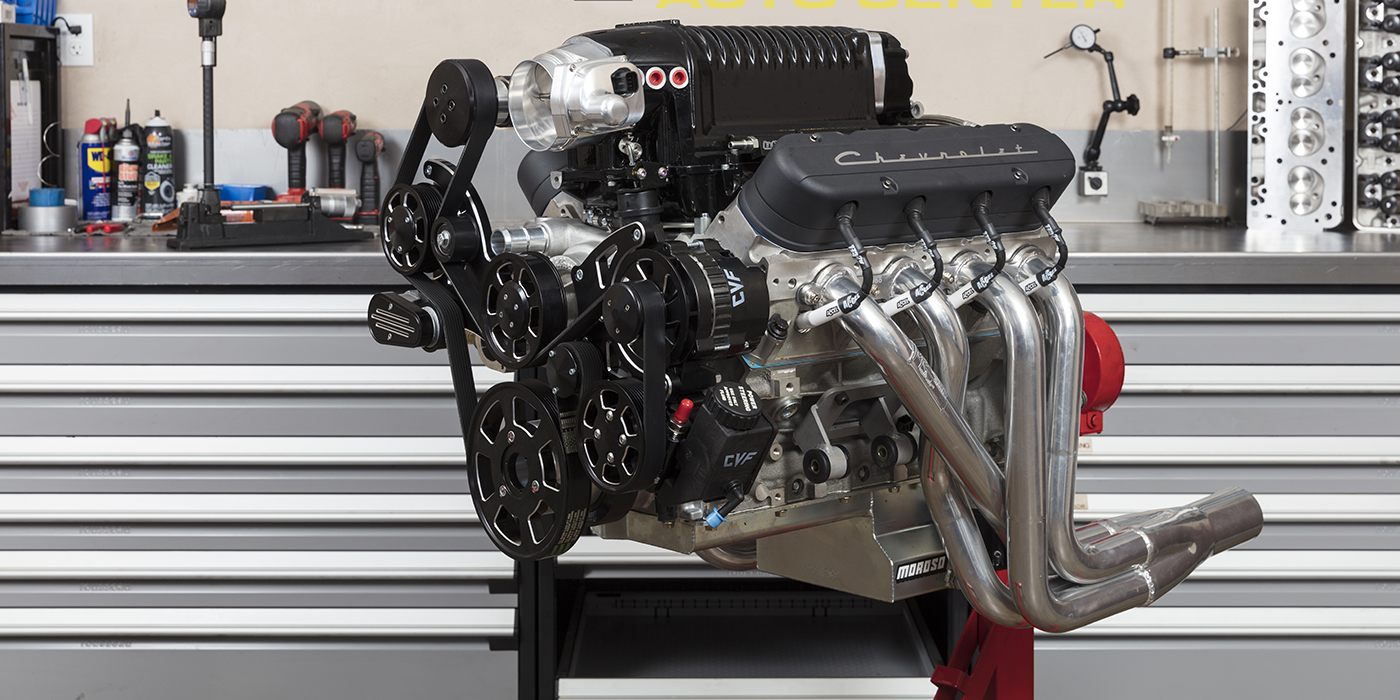 Looking to upgrade an old C3 Corvette from its 350 Chevy engine, Dave’s Auto Center got to work building a supercharged LS9 engine capable of nearly 1,000 horsepower! Let’s see a Chevy 350 compete with that!

Dave Bell got his start in this industry during one of the more fun decades in recent history in arguably one of the more fun locations here in the U.S. – the disco era of the mid-1970s in Miami, FL. Dave was just a 15-year-old at the time, working at a Miami taxi cab and limousine place.

“That was a fun job for a young man,” Bell says. “I got to see a lot of things that we won’t talk about.”

Whatever Dave’s experiences were during his time in Miami, they didn’t discourage him from continuing in the automotive industry, rather, they fueled it. In his early 20s, Dave packed himself up and moved out west to the Salt Lake City, Utah area where he met a gal and began working at dealerships as a mechanic.

It wasn’t until 1990 as a 30-year-old, that Dave found himself ready to start up his own shop.

“My first business was in a storage unit,” he says. “I wasn’t there for long because I kept doing good work. That’s how I built my business. People find you if you do good work.”

The first machine Dave bought was a green Sunnen valve guide and seat machine, and from there, the sky was the limit.

“In 1993, I bought a couple acres out here just north of Salt Lake City [in Centerville, UT],” he says. “I put up my shop by 1994. The first edition of the shop was 8,000 square feet. I can remember being scared to death thinking, ‘Oh my gosh, I fooled the bank into loaning me the money. Now, how in the heck am I going to pay for it?’”

Fortunately for Dave, and for his customers, that initial shop, called Dave’s Auto Center, did great work and continued to thrive and grow with the addition of more shop equipment. Today, Dave is 60 years young and the shop is 30 years old and still thriving as well.

Dave’s Auto Center has 10 full-time employees including Dave and two of his sons – Miles and Joey – who help out in the shop. Miles runs the front counter and manages the store, while Joey is one of the main machinists.

“I’ve got two of my sons working with me and seven other guys,” he says. “Some of my guys have been here for over 20 years. We really run the gamut. I’ve got Jeeps, Chevys, a couple Powerstrokes, a couple Cummins, some hot rods, some Subarus, and some boat motors in the shop right now. We have 25 bays for installs.”

While Dave’s Auto Center does engine work on pretty much any kind of vehicle, one thing the shop doesn’t currently have is an engine dyno, simply because the shop is always working on a different engine platform every day. For that reason, a hub chassis dyno is in the plans for the shop’s expansion this summer.

“I think I’m going to a four-wheel hub dyno because it’s safer and you don’t have to worry about tires coming apart or anything like that and strapping the vehicle down,” he says. “These hub dynos will run up to 7,000 horsepower now.”

Recently, Dave’s Auto Center had a customer come to the shop with a 1978 C3 Corvette looking to add more power. The customer is a Corvette enthusiast who wanted to turn the old Corvette into a vehicle he could show off and bring to car shows.

“The guy has had it for 20-plus years,” says Miles Bell. “He’s always wanted to build it up and make it fun. He’s taken it to a few other shops to get it fixed and nobody’s been able to take care of him. He came to us and we’re building him a hot rod.”

Initially, the customer was looking to supercharge the Corvette’s 350 Chevy engine. However, Dave had other ideas to make this C3 and its engine really shine!

“Once I found out what he really wanted, I told him we shouldn’t use the 350,” Dave Bell says. “Don’t get me wrong, I’m an old guy and the old 350 Chevrolets are great, but there are a whole lot of better ways to build horsepower today than using that old block.”

The shop and its customer decided to go with an LS9 block with LS9 heads. The factory heads have a thick deck on them, which was perfect for this build since Dave’s Auto Center was putting some boost in this build.

“We’re doing a steering rack and pinion, a CVF pulley kit, a 6-speed Magnum transmission (the GM T56 Magnum), and a bunch of stuff with the LS9 engine,” Bell says. “This was a brand new LS9 block, but we still line hone them in our Rottler H85AX. I love when I put a crank in a motor and can just spin it with my fingers.”

Dave’s son Miles did a lot of the work on this particular build. Beyond the factory block and heads, the LS9 features a host of aftermarket components.

“We used a Molnar 4.000˝ stroke LS crankshaft and H-beam Molnar connecting rods,” Miles says. “We’re using ARP 2000 series bolts for the bottom end and ARP head bolts. The pistons are Diamond’s Comp Series with the Diamond Pro Select ring set. We used a COMP Cams adjustable billet timing set and we degreed the engine once it was built. We used a Melling LS1 oil pump and a Moroso road race oil pan, which is new for this motor. We used King race series bearings and cam bearings. For lifters we used Chevy Performance roller lifters. The pushrods are chrome moly pushrods from Trick Flow. The supercharger is a Whipple 2.9 supercharger kit. And we got a 102mm throttle body, which is a fly-by-wire throttle body.”

All of this is being bolted up to the T56 Super Magnum 6-speed transmission as well as a Chevy Performance clutch kit. To let it breathe, beyond the 102mm throttle body, the shop added 2-inch long-tube headers.

“The LS conversion wiring harness is the Holley Eliminator Dual Injection system,” Miles says. “The supercharger, the throttle body and the Holley management system all came from Steve Morris Engines.”

Lastly, the LS9 engine has a Fluidampr set up and fuel injectors from the Fuel Injector Clinic. With all of this now assembled in the LS9, the C3 Corvette customer will be able to make somewhere around 950-1,000 horsepower. Let’s see an old 350 Chevy compete with that!