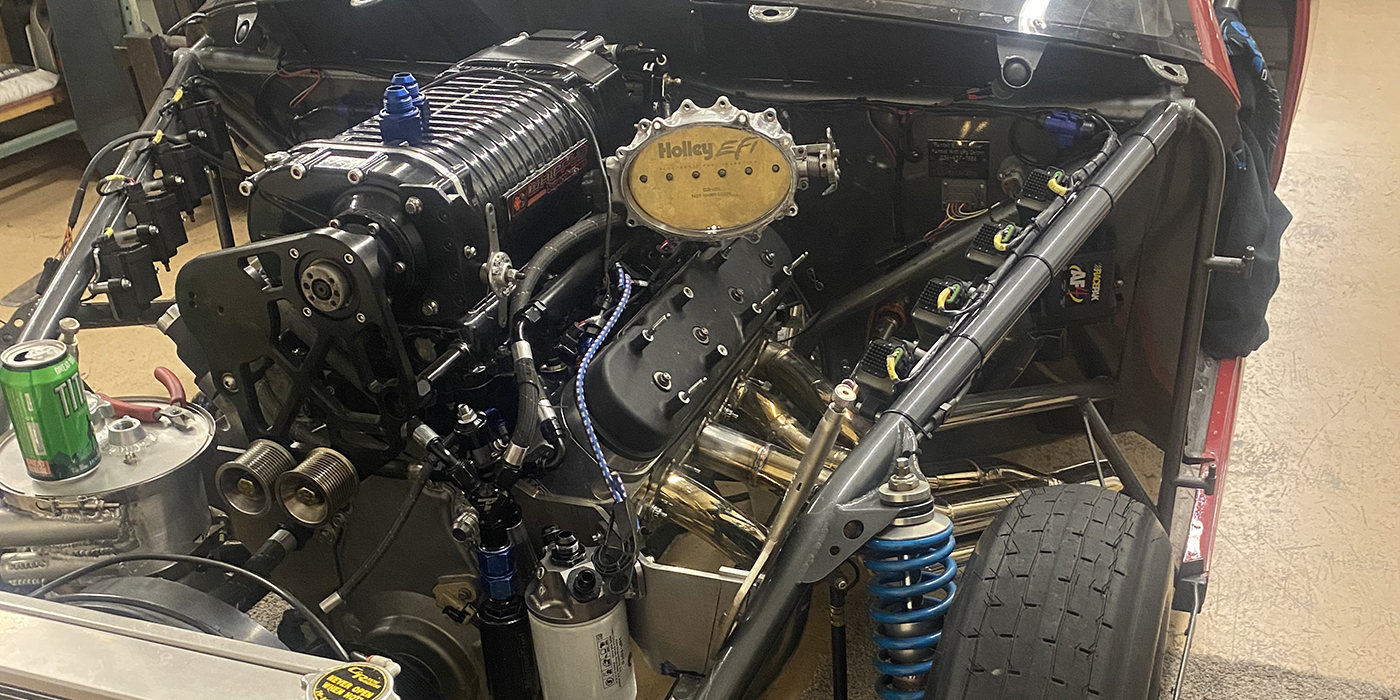 Unable to afford a COPO Camaro, Bob Reinhardt of Madcap Racing Engines decided to build an even better version. It’s a 388 cid LS7-based engine with a 4.0L Whipple on methanol fuel – and it’s injected. It’s pretty cool, and Bob expects to make around 2,000 horsepower. Find out what makes the build unique.

We last caught up with the guys at Madcap Racing Engines, owned by NHRA legend V. Gaines, back in 2018 when we featured a 747 cid big block Chevy nitrous engine the shop built. We chatted with shop manager, Bob Reinhardt, who has remained hard at work churning out big cubic inch engines, as well as a 388 cid Whipple-supercharged LS7 engine for his own use.

“I bought a 2006 Pro Stock car that this is going in, so now I can get after it,” Reinhardt says.

Reinhardt, like Gaines, has been into racing for a long time. He took that interest and translated it into engine and machine work and eventually a career at Sonny’s Racing Engines for 13-14 years. He then came to Madcap, which bills itself as Denver’s fastest machine shop, in 2010.

“Mainly we do really high-end drag racing stuff, whether it’s Top Sportsman, Top Dragster or Pro Mod,” Reinhardt says. “We do NHRA 500, which has been our main focus for a long time due to V. (Gaines) racing.”

Madcap is a full machine shop and does everything in-house except for really high-end cylinder head development.

“We can do basic porting and whatnot, but for the really high-end development we work with a couple of different companies on that,” he says. “Everything else we do in-house.”

The Whipple-charged LS engine came about because Bob helps a local guy who has a couple of blown COPOs and the platform fascinates him.

Bob and Madcap already built a more tamed down version of this engine using a hydraulic roller and a not as aggressive build, which was capable of 1,400 horsepower.

“The engine is LS7-based, so it has six studs around each cylinder as opposed to four like a typical LS2 or LS3 has, so that helps,” he says. “It’s using ARP studs everywhere. Over the winter, I may upgrade the headstuds to half inch. Right now, they’re 7/16ths. It’s got all really good, solid parts. A billet crank, GRP rods, Gibtec pistons, Brodix BR7 cylinder heads, a custom COMP camshaft, and ACL bearings.

“For the valvetrain, we used titanium intake and exhaust valves, as well as Crower shaft rockers. Basically, it’s a really high-end bracket build. The engine features a 4.0L Whipple supercharger. The whole thing is cool and it’s neat to me because it’s kind of unique – at least in the drag racing world it is.”

In addition, Reinhardt is going to convert it to a Dailey billet pan dry sump set up. It also has a Holley Dominator ECU, and its coil on plug.

“I’ve also done a couple of tricks to the fuel system to make more power and get it to run cooler,” Reinhardt says. “I’m blowing alcohol through the blower to cool the inlet charge and I took the intercooler out of it. Nobody’s really doing that at the moment, but that way I don’t need the intercooler. It still has good, cold air inlet temperature, which is part of why it makes so much power compared to a gas version with the intercooler.”

Having already made over 1,700 horsepower on a less aggressive tune and without the use of the shop’s fastest pulley’s, Bob has his sights set on 2,000 horsepower and racing in Top Sportsman.