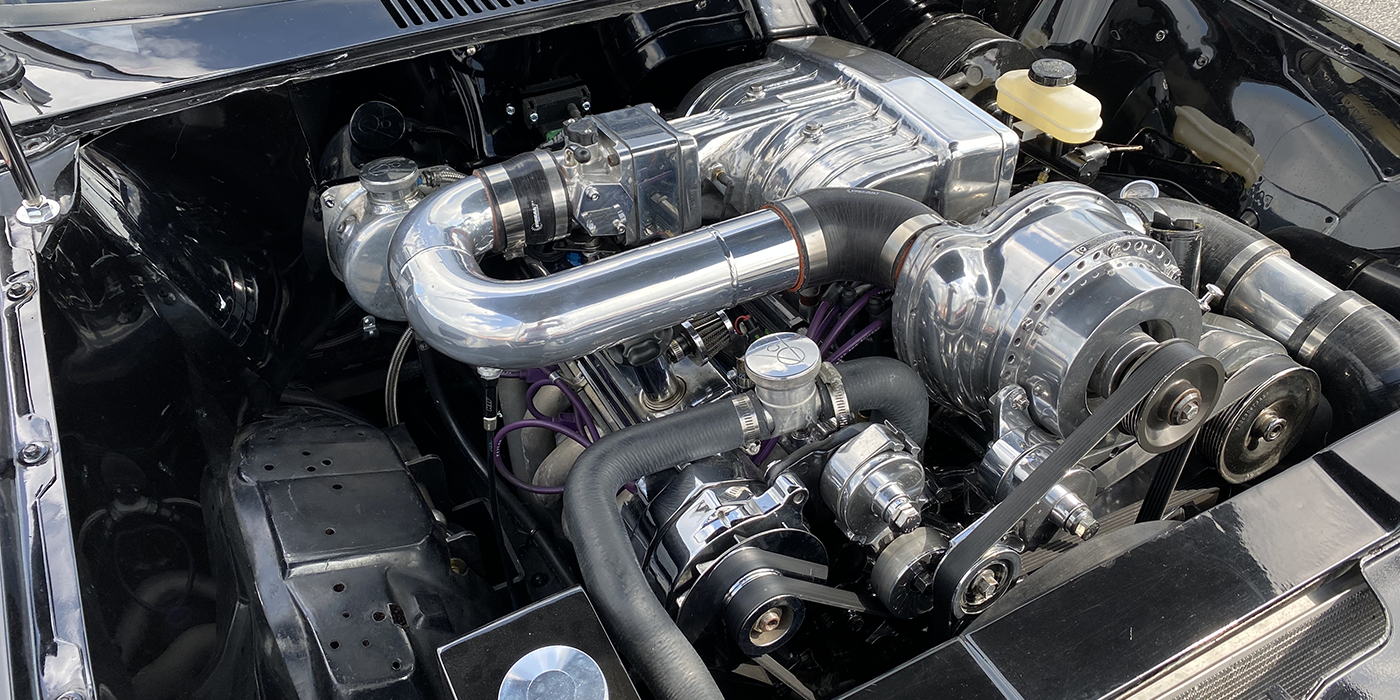 After a liver transplant left Lonnie Smith with more time on his hands than he knew what to do with, he decided to build another hot rod. He found this ’88 Ford Ranger GT in Kentucky and has spent the last 13 years modifying it. The latest addition is a supercharged 331 cid small block Ford engine. Check it out!

Walking around Summit Motorsports Park back in August, there were a ton of cool cars to take in during the 2021 Hot Rod Power Tour stop in Norwalk, OH. However, one of the very first cars of the day to catch my eye was Lonnie Smith’s 1988 Ford Ranger GT with a supercharged 331 small block Ford providing it horsepower.

We were fortunate that Lonnie and his wife Kathy were hanging near the car as we walked by, so we stopped to chat and got the full details of the build. Lonnie Smith hails from Indianapolis and grew up around racing and drag strips since he was literally 1-year-old.

“Both sides of the family have always drag raced, so I’ve been around it my whole life,” Smith says. “I sold a ‘31 five window when I got married and I told (Kathy) that I would eventually build another hot rod – and this (Ranger GT) is that.”

Lonnie told us that his Ranger GT build started three years after he received a liver transplant a while back. At the time, it was determined that due to some complications with the transplant, he couldn’t go back to work. Having grown up on a farm, serving in the military for six years and then working in construction for 17 years, he wasn’t handling all his free time well. He decided it was the right time to build a hot rod.

“I already owned a Ranger, so I was looking for parts and pieces on some of the forums and I found this GT sitting in Kentucky,” Smith says. “The price seemed right, so we drove to Kentucky on a Sunday morning and ended up driving home with the truck. We have slowly, over the last 13 years, upgraded it, modified it and turned it into a modern resto mod.”

From the factory, the ‘88 Ford Ranger GT long bed featured a 2.9L V6 engine and it came with upgraded suspension and interior packages. Lonnie had a built 306 in the truck initially, but lost that engine last October after eight years. He got his new engine in the truck just a few weeks before going out on the 2021 Power Tour – it’s a Ford Performance Boss 302 block stroked to 331 cubic inches.

“This is the second engine that’s been in the truck,” he says. “This engine is approximately only two months old. M&M Competition Engines in Franklin, IN did all the bottom end work with the new motor and we assembled it ourselves.”

At the time of our interview, the engine was only three and a half weeks old with about 125 miles on it. It’s got an all-forged bottom end – forged crank, forged rods and aluminum pistons.

“The old 306 made low-400 horsepower to the tires,” he says. “This new engine is basically my top end off the old motor with a brand-new bottom end. We’re hoping to make north of 700 hp with this motor. The Power Tour is the break-in and then we’re going to dyno tune it when we get back to Indianapolis.”

That top end is a set of aluminum heads sourced from Engine Parts Warehouse that were worked over by Mike Stark at CFM Performance in Indianapolis.

“Mike did all the porting and polishing and opening up on the heads, so they’ve been completely reworked,” Smith says. “The same thing with the intake. The intake is actually a Typhoon 2 intake, but it’s been completely ported out and polished, so it gets a lot more air than a standard Ford motor. We also went to bigger aftermarket valves.

“The engine also has an old school, Paxton supercharger. That supercharger came on the Studebaker Avanti and the early Shelby Mustangs. It was just completely rebuilt by Craig Conley at Paradise Wheels in California for $800. You can’t buy a new supercharger for that. We’re pushing about 10-12 lbs. of boost now.”

This small block Ford also utilizes a Foxbody radiator, a Top Street Performance fan shroud and a Derale electric fan that is controlled by a Dakota digital two-speed fan controller. Helping put power to the ground is a custom-built TKO five-speed transmission done by Hanlon Motorsports. The engine runs on methanol to keep it cool and it uses a Terminator engine management system.

“In years past, it has always been tuned by Greg Mayton at Speedy Dyno in Owensboro, KY,” he says. “Greg has done a ton of work to this truck. It is currently tuned by Adam Hudson at Mid-America Customs. I have to also thank Mark at Earls Indy and Kevin Ferguson who have both been big contributors to this project.”

Inside the ‘88 Ford Ranger GT, the truck features a custom interior, which was in place when Lonnie bought it, as well as AutoMeter gauges. Something else Lonnie had to upgrade on the truck were the tires due to the new, small block Ford’s torque.

“The new motor has enough torque that I had to go out and buy a set of drag slicks for it because it was unsafe to drive with the new motor otherwise,” he says. “I would just tap on the pedal and I’d be going sideways.”

With the break-in complete and several hundred miles put on the 331 small block Ford, Lonnie is looking forward to seeing what his new engine can do on the dyno. North of 700 hp should be more than realistic with this supercharged build!