You can always expect to do a fair share of “bench racing” while sitting around the breakfast and lunch table at the Advanced Engineering Technology Conference (AETC). This year did not disappoint.

Held just before the PRI Trade Show on December 8-10, 2008, at Orlando’s Orange County Convention Center, the 19th AETC nearly doubled its attendance from last year’s conference, according to show organizers. Suffice it to say, this year’s AETC really outdid itself. 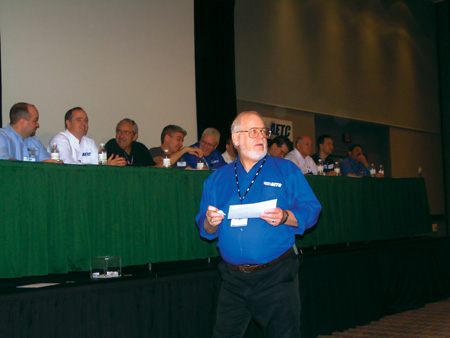 This year’s conference had a unique twist in that it was centered on GM’s LSx engine family, and all of the speakers added their own take on this venerable engine series. This may have seemed like a gamble to some before the conference, but organizers credit the LS theme as one of the biggest reasons that attendance grew so much this year.

Ford fanatics do not fret – you will have your day in the sun at the 20th AETC, as the topic is the modular Ford engine.

Those lucky enough to attend this year’s conference were treated to insider LSx engine building secrets from some of the biggest names in the industry. They also got a chance to get a closer look at some of the latest LS technology and win some amazing prizes.  What’s not to love about that?

AETC prides itself on its access to speakers and industry leaders, whom you can meet at informal gatherings during breaks in the action to discuss issues in the racing industry with them and fellow attendees. There are no pretenses at this conference, as everyone is treated the same whether you run a company or work in the cleaning department.

Speakers shed new light on the LSx, as the schedule was jam packed to present as much new information as possible, as well as answer the many questions from attendees. 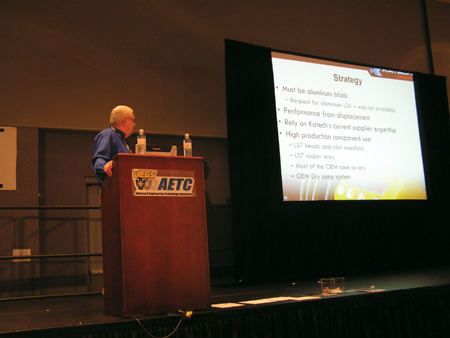 One of the extra bonuses this year was the product giveaways. AETC sponsors raffled off $30,000 in bonus product giveaways as part of the first ever AETC “Go Fast” door prizes. But, regardless of your luck in the drawings, each attendee received ample  “swag” in a bag filled with products, literature, exclusive manufacturer product coupons and other surprises.

“A lot of people have donated things: four or five sets of cylinder heads, pistons, all kinds of other stuff. So the attendees had a good chance of taking away more than what they put in to come,” says AETC promoter, Comp Cams CEO Scooter Brothers.

While the topic of focus was LS engines, the information presented illustrated successful engine building techniques, which applied to all engines not just the LS platform.

“Even though this was a GM specific conference this year, and next year is a Ford specific conference, the engines are the same,” Brothers explains. “The engines don’t know whether they are a Ford or a Chevrolet or whatever. So the basic fundamentals of what we learn here will be the same across platforms.”

The AETC has steadily increased its presence as a pre-PRI show event, bringing together industry leaders, engineers and media members looking to learn and share the latest engine technology.

If you are in the performance engine building business and have never attended one of these conferences, you owe it to yourself – and your business – to come to at least one AETC. Not only are the presentations informative and entertaining, the access to key people in the industry, to answer questions and for networking, is simply unmatched at any other conference.

You also never go hungry at an AETC conference, as each day includes both morning and noon meals and a 30-minute break after each presentation, all of which are structured so attendees can take advantage of the networking opportunities. There was also a roundtable discussion, door prizes, manufacturer showcase, Q & A sessions after every presenter and a networking cocktail party.

Of the many great presentations this year, a few stood out from the rest. Kenny Duttweiler of Duttweiler Performance, comes to mind as he was very forthcoming with insider tips on engine building and supercharging in his “Advanced LSx Forced Induction System Design, Building, and Tuning” presentation. Duttweiler said that he didn’t mind sharing all that he knew about the LS with his peers and competitors because he himself learned so much from others in the room.

Dan Timm of Wegner Motorsports, also gave a very eye opening presentation on “Developing the NASCAR LS1 Spec Engine and LS in NASCAR of Tomorrow,” which was a somewhat controversial subject for a room full of engine builders who make a living building race engines. He said that the Spec Engine has a life of its own and that NASCAR and other sanctioning bodies are continuing to develop the concept. Timm hopes that new rules will open it up to many aftermarket companies and engine builders in the future.

To find out more about the upcoming 20th Annual AETC or to make plans to attend, call 866-893-2382, or visit them online at www.aetconline.com.