Rings that do not seal well during all four phases of the four-cycle combustion process can reduce an engine’s power potential by 20, 30, 40 or more horsepower depending on the engine’s displacement, compression ratio and speed.

Rings that leak during the intake stroke will reduce air velocity and volumetric efficiency. Less air and fuel in the cylinder means less power. Rings that leak during the compression stroke will allow some of the air/fuel mixture to escape into the crankcase. Besides reducing compression and power, the unburned fuel that gets into the crankcase will dilute the oil. This will reduce the oil’s lubrication qualities while increasing the risk of engine-damaging sludge if the oil isn’t changed often.

Rings that leak during the power stroke will allow a loss of pressure that would otherwise be used to shove the piston down. The resulting blowby will also allow soot and moisture to enter the crankcase to further degrade the oil.

Another factor to consider is the amount of friction created by the rings against the walls of the cylinders as the pistons reciprocate up and down. Ring friction eats up more horsepower than the cam and lifters, the cam drive, the rocker arms or the crankshaft. Of the three rings in a typical ring pack, the oil ring accounts for 60 to 70 percent of the total friction created by the rings. Reducing ring friction by using smaller, thinner low tension rings can allow you to “find” horsepower that was previously lost. Low tension rings reduce friction and allow an engine to produce more usable horsepower.

However, dyno testing has shown that it is possible to reduce static tension on the top ring too much, causing a loss of pumping efficiency (vacuum) on the intake stroke. If you don’t get all the air/fuel mixture you can into the cylinder on the intake stroke, it’s not there to make power during the power stroke.

In late model original equipment stock engines, the rings are often moved closer to the top of the piston to eliminate the crevice where unburned fuel can be trapped. This is done for emission purposes and to help fuel economy. In a performance engine, the same logic applies. The more efficient the combustion process, the more power the engine will produce. But power also produces heat – a LOT of heat in a performance engine. This can be murder on both the top ring and piston groove if the materials are not able to handle the heat. For performance applications, you want a top ring made of ductile iron or steel. Wear resistant side coatings such as PVD or nitriding can help the rings survive this harsh environment. The top groove in the piston may be anodized or coated to minimize micro-welding and wear.

Scott Gabrielson of Federal-Mogul says one way to improve ring sealing is to modify the profile of the ring grooves so they provide optimum support for the rings when the pistons get hot. He says their Sealed Power DDP pistons feature an exclusive “Thermal Arching Compensation” (TAC) technology that creates a slight upward tilt to the ring grooves. This reduces blowby and improves oil control.

Gabrielson says it is important for engine builders to make sure the rings match the pistons they are using. “If you buy rings from one supplier and pistons from another, there is always a chance of a mismatch. The piston grooves may be too shallow or too deep for the rings resulting in improper backspacing. Or the piston grooves may not provide the correct side clearance for the rings. Federal-Mogul offers piston and ring sets that are perfectly matched to provide the best possible seal.”

“Years ago, most standard oil rings generated about 21.5 lbs. of tension. Today’s thinner rings, by comparison, are down about 7 to 8 lbs., or about one third of what they used to be.”

Regardless of how much tension the rings generate, the best possible seal is going to be obtained with a round, straight cylinder bore. Gabrielson says a plateau finish is always best. “If you don’t plateau the finish, it will take longer to break-in and seat the rings. The scrubbing will eventually create a plateau finish anyway, so why not do it from the start?”

Cylinder bore distortion can have a negative impact on sealing, so to minimize distortion, Gabrielson recommends honing with torque plates (hot honing is even better!). Always use a new head gasket, and make sure the head bolts are tightened to the same value as when the cylinder head is installed.

Jeff Guenther of Hastings Piston Rings offers some suggestions for achieving a proper plateau finish. You should be using a profilometer to measure the various attributes of the surface finish. There are a lot of parameters you can measure, but these three are key:

Ed Kiebler of Rottler provided the following suggestions as to how you can achieve an optimized surface finish in hard blocks or sleeves for Pro-Stock, Comp Eliminator, NASCAR or similar engines with a Rottler HP6A machine:

Bill McKnight of Mahle says ring selection plays a major role in optimizing horsepower. “In a maximum effort naturally aspirated engine, you should use the lightest weight and lowest drag ring pack available. In a power adder application, you also need to think about ring materials that can handle increased cylinder pressures and the extreme heat produced by nitrous oxide, superchargers and turbochargers.”

McKnight says a supercharged nitro methane drag race motor can bend a 2.0 mm wide top compression rings right out of the piston groove in less than four seconds! By comparison, a maximum effort naturally aspirated motor of the same displacement can usually get along just fine with a 1.0 mm wide (or thinner) top ring. He says engine builders need to carefully consider all the aspects of the ring pack, including ring width, radial wall thickness, the base material, the facing material, ring tension and rind end gap when choosing rings for a particular motor.

McKnight says that reducing the ring-to-piston vertical and groove back clearances can aid in reducing cylinder pressure loss. But he warns it is possible to go too far. “The top compression ring needs combustion pressure behind it to hold it out against the cylinder wall during the high pressure portion of the combustion cycle.

Conventional pistons rely on a calculated amount of side clearance to provide a path for combustion pressures to get behind the ring, energize it, and push it out against the cylinder wall. Unless some method, like gas porting, is utilized to route those high pressure gases to the back of the ring, overly tight side clearances can restrict that gas flow and de-stabilize the sealing process.”

McKnight says there’s a performance advantage if you can assure the piston ring sealing surfaces and piston groove sealing surfaces are flat and true. Any variation in either will allow the cylinder pressure to escape, negatively affecting the gains made by minimizing ring-to-piston groove clearances. He says that optimizing groove fit is well worth the effort in maximum effort naturally aspirated engines.

Gas ported pistons (vertical or lateral) also help with ring sealing. The ports provide a more direct path for cylinder pressure to get behind the top ring. Gas pressure helps force the ring out against the cylinder wall. In high rpm applications, gas porting helps thinner, lighter rings be more stable, reducing the tendency to bounce or flutter in the ring groove (which can break the seal).

McKnight says the optimal end gap for a top compression ring is when you achieve the smallest gap without butting the ends of the ring together when the rings get hot. “A good starting point for the top compression ring is .0045? per inch of bore diameter for a naturally aspirated engine, and .006? for a power adder application.

“The second ring end gap should be .005? to .010? wider than the top ring gap to prevent gas build up between the top and second rings. This can cause the top ring to flutter or bounce and lose its seal.”

In a heavily boosted or nitrous oxide application, McKnight says the second ring is forced more and more to act like a compression ring. Because of this, he says it should probably be gapped nearly the same as the top ring.

Piston ring manufacturers publish end gap recommendations in their catalogs and on their websites. Always refer to these recommendations as they will vary from one manufacturer to another depending on the type of rings used, what the rings are made of, and the application.

As a rule, the higher the power output of the application, the more end gap you should allow for thermal expansion.

In Federal-Mogul’s Speed Pro Piston Rings Catalog, for example, the end gas recommendation for a typical four-inch bore might range from .018? to .020? for a drag racing or oval track engine, to as much as .024? to .026? for a supercharged engine.

Many second compression rings today are a napier style that helps scrape oil off the cylinder wall. Jack Bishop of NPR says napier rings create a vacuum between the rings, so it’s a good idea to open up the gap on the second ring. He recommends the second ring end gap be 0.2 to 0.25 mm larger than the top ring end gap.

The issue of where to set piston ring end gaps is moot if you are using a gapless style top piston ring. Bobby Chessman of Total Seal says 90 percent of Pro-Stock drag racers are using his rings because of the advantages a gapless ring offers: namely, a reduction in leakdown of 10 to 20 percent over a conventional style piston ring. “As a rule, people who run a gapless top piston ring see 3 to 5 percent more horsepower. That’s as much as 40 horsepower on a big inch motor.”

Chessman says Total Seal also makes conventional rings, too. But the gapless design is a patented feature nobody else offers. “An engine builder can use a gapless ring for either the top or second ring,” says Chessman.

Insert the rings into a bore and measure the end gap with a feeler gauge. Adjust the gap as needed by filing only one side of the gap. Keep the gap as square as possible. This will allow the rings to run with the smallest possible gap.

Always use a ring expander so you don’t twist or deform the rings when mounting them on the pistons. Make sure the rings are installed with the correct side facing up (top is usually marked with a small dot). Also, stagger the location of the end gaps on all three rings 180 degrees apart.

Make certain the cylinder bores are clean before you install the pistons and rings in the block. Use hot soapy water, scrub brush and plenty of elbow grease to thoroughly clean the bores. Wipe with a clean white rag to check for any residue, then lightly oil prior to assembly.

Make sure the ring compressor is properly tightened so the rings don’t catch on the edge of the cylinder as the piston is being pushed into the bore.

For engine break-in, use a conventional oil or specific oil designed for breaking in engines. Then switch to a synthetic after 2,500 to 3,000 miles if you want the advantages of a synthetic motor oil. 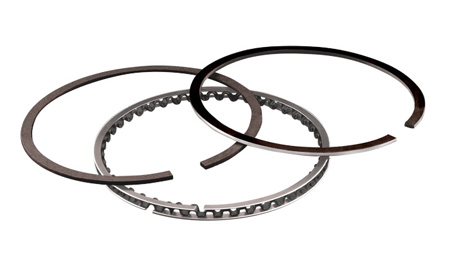