Spark plugs never foul out anymore, and the old term “it’s breaking up at high rpm” has literally disappeared from the racer’s vernacular. And now thanks to digital electronics, even the spark advance curve can be programmed on a laptop computer instead of adjusting weights and springs that fly around inside of a distributor. How many engine builders take a new ignition system out of the box and install it, then send the engine out the door assuming that everything is okay?

If you are assuming that because your ignition system is new, it’s good, you or your customer could be in for a lot of headaches. Recent testing has shown, billet or not, the quality control of many of today’s distributors leaves a lot to be desired.

How critical is ignition performance to overall engine performance? There is no better way to quantify an ignition’s effect on engine output, than to spend some time on a couple of websites like www.dragtraction.com and www.moretraction.com. Both of these sites offer some very sophisticated electronic traction controls.

All of these systems essentially sense a quick spike in engine rpm and within milliseconds retard ignition timing. It’s amazing that you can stop a spinning tire on a 2,000 hp drag motor almost instantaneously by simply retarding the spark. It becomes even more amazing when you find out how little timing retard it takes to mean the difference between smoking the tires and making a perfect run!

These traction control systems normally operate in the range of one to three degrees of retard, with just a single degree of retard getting the job done most of the time. So the question is – do you know where your ignition timing is within one degree throughout the rpm range? If not, you or your customer will probably never need traction control.

In fact, the digital component lets engine builders and racers control where, how and when an engine makes its power. Nothing could demonstrate this capability more than the many 10.5-inch tire racers that are harnessing 2,700 hp and running in the sevens on barely 11-inch wide tires.

Actually it takes a sophisticated traction control system such as MSD’s Programmable “Digital-7 Plus” ignition box that allows a tuner to set individual cylinder timing, an individual timing curve for each gear, numerous retards, timers and, most importantly, the “slew-rate limiter value,” a very accurate limiter on engine acceleration measured in rpm/sec. With some testing and data acquisition a racer can determine what the max engine acceleration rate is when the car is hooked up, and use that number as his slew-rate limit. Simple! If the tires start spinning, the engine will exceed its “slew-rate” and the rev limiter and retard will control the traction issue.

Another effective use of ignition timing in this traction battle is to retard the initial timing at launch, then feed the spark advance back in as quickly as the tires will handle the power. This is more consistent and controllable than trying to “drive” the car off the line controlling the rate of throttle opening.

So how do you check ignition performance anyway? You really need a distributor machine because without it, you can’t see if the spark is consistently firing at the correct time for each cylinder (remember how important one degree of timing is). Without a distributor machine you also can’t see if the intensity of the spark is growing weaker at higher rpm, and you can’t determine the spark advance curve. These factors, plus several others, have a big influence on how an engine performs. And many times an ignition problem will be misdiagnosed as a fuel delivery problem and countless hours and dollars are wasted trying to fix a fuel system problem that doesn’t exist.

Unfortunately, new distributor machines have not been manufactured for sale in the U.S. since the 1970s. In the past they were limited to just three brands, Sun, Allen and King. Anyone who has used a Sun or Allen distributor machine is familiar with its shortcomings – the three-jaw chuck that clamps the distributor’s shaft is never secure enough and slips, and the motor is not powerful enough to drive a magneto. Unfortunately, it is a tool limited to mechanical advance distributors because the machine has no internal circuits to test today’s electronic ignitions.

Now thanks to Deke Williams and his engineers and designers at King Electronics there is a new state-of-the-art distributor machine that is affordable enough for most small shops to own and they have the potential to be a significant profit center. Deke, an electronics engineer by trade, set out to build the ultimate distributor machine after watching a Ferrari technician use an antiquated Sun distributor machine to phase the twin distributors on his 12-cylinder 365 GTC. Looking for a new machine, he found that King was the only company still manufacturing distributor testers, but their technology was outdated and the company was up for sale. Sensing a need, he acquired the company and with a team of engineers, designers and machinists created a modern distributor tester. The result is a thing of beauty to anyone who appreciates fine machinery.

The King D16 features a black anodized and laser-etched billet aluminum case that attaches to a tig-welded aluminum tube frame. It uses an industrial milling machine-type ER-40 collet to drive the distributor or magneto with absolutely no slippage. The 1.5 hp motor can spin the biggest Top Fuel magnetos to 11,000 rpm without flinching, and the King machine is set up to test any distributor or magneto ignition system right down to the sparkplugs.

The King D16 will test point-type distributors, magnetic triggered distributors, optical pickup, and electronic module distributors for advance, stability and dwell (both mechanical and electronic). The D16 can also check today’s most sophisticated analog and digital ignition boxes for internal rev limiters, NOS switches, two-steps, retards and slew rates. There is nothing more difficult and frustrating than trying to troubleshoot a faulty ignition box.

With the King D16 you can perform a number of distributor and ignition tests that take the guesswork out of ignition setup. First, you can check to see how stable the timing is. Spark “scatter” can be the result of distributor shaft run-out, or in the case of a breaker points-type distributor, point instability. You’d be amazed at how many brand new out-of-the-box performance distributors have run-out and poorly designed point attachments. You can also check the advance curve and check to see if it’s even working. Since the King D16 will spin a distributor to 11,000 (engine) rpm, you can also see what is happening to the timing and quality of spark at the engine’s redline.

Because the distributor machine shows where each cylinder is firing, you can confirm that the timing is perfect for all cylinders, not just number one. Many max effort pro racers use digital ignition boxes that offer individual cylinder timing to compensate for lean cylinders or in the case of the traditional big-block Chevy, four good intake ports and four bad ports – the King machine makes it extremely simple to set up the ignition system to work this way and test it to make sure it does. The old Sun machines were finished at 4,000 rpm (8,000 rpm engine rpm). With point type distributors you are apt to see point bounce at high rpm and on distributors with electronic modules, a loss of dwell and spark intensity as rpm increases.

The best part about setting up a distributor on one of these machines is that you can install a custom curve. Let’s say that you run your musclecar in a sanctioning body that doesn’t allow these fancy digital ignition boxes. You can put a slow, longer advance curve into the mechanical advance allowing you to limit the amount of initial timing. Or if you are running a car that really hooks up, you can put an extremely short, fast curve that uses a ton of initial timing, making the engine and car extremely responsive.

In the past, racers with magnetos simply had to send their mags back to magneto service shops for periodic checkups or just wait for their engines to start running sour to know that something was amiss. That can cost races and championships. The King D16 is great for checking magneto advance curves, cylinder-to-cylinder spark consistency and by visually observing the quality of the spark at the spark plug on the spark plate, especially at high rpm.

You can also fire across an adjustable gap device to determine that the voltage output is what it should be. Any serious Sprint Car, Top Fuel or Alcohol racer should have a King D16 machine in his trailer and one in the shop. Ignition problems are sometimes undetectable in the car, and small drop-offs in performance are hard to track down.

King offers two D16 models the Professional grade and standard. The major differences are the Professional D16 features a 1.5 hp motor that is essential to spin the big magnetos compared to the Standard’s 1.0 hp. The D16 Pro also has an internal 8-cylinder points emulator and coil driver that allows you to test coils, ignition wires and spark plugs without a distributor. It also comes with an oscilloscope and dwell meter standard that are options on the D16-T (standard model). You can get more details and information at www.4King.com.

It seems that engine builders and customers obsess about having the best combination of engine components available, painstakingly assembled into the quintessential performance engine, then leave 100hp on the table because they simply don’t know how their ignition system is working. Don’t let this happen to you!

Len Emanuelson has spent the last several decades
in the performance magazine business, notably as technical editor,
editor and publisher of such titles as Popular Hot Rodding, Hot Rod, Car Craft, Circle Track, and Motor Trend magazines.
In 1989 he was inducted into the Bonneville 200-MPH Club with a 221 mph
average in a Feuling Engineering Quad-4 Olds Cutlass. When he has time,
he races 125cc Shifter Karts. You can reach Len at [email protected]. 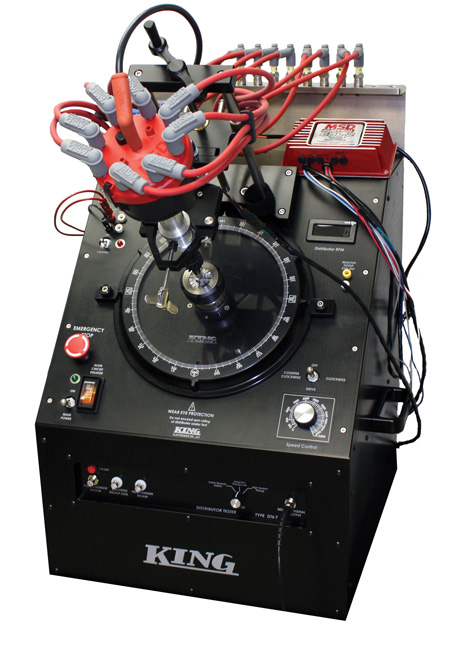 Does Ignition Tuning Still Matter? Things You Need To Know