As a motorhead physicist, I get to look at engine lubrication from the
views of both an oil formulator and an engine failure analysis expert.
Since I used nitromethane fuels when I raced funny cars, I’ve seen more
than my share of engine failures. I’ve also formulated oils for use
with alcohol and nitro burning engines, but let’s leave that discussion
for another time.

Racing oils have evolved considerably over the past 20 years. In the
’70s and ’80s most racing oil formulations were merely designed on
paper (arm chaired) because the racing oil market was considered to be
too small to justify significant oil marketer R&D test
expenditures. Most major oil marketers didn’t even offer racing oils
for sale to the public. They offered race teams the same oils you and I
were using on the street so they could advertise that fact.

By
the 1990s several NASCAR teams had contacted their oil company
sponsors/suppliers requesting racing oil chemistry which could help
solve some engine durability problems. For example, I got heavily
involved with a Chevrolet-powered race team to help solve a
ring-welding issue. Early small block Chevy engines always placed
exhaust valves adjacent to each other on the center cylinders. Pistons
on these “hot spot” cylinders transferred metal to the top rings,
interfering with good ring sealing.

Working for a specialty
chemical company, where cost was virtually always an issue, I was
amazed at how much money NASCAR engine R&D people were willing to
spend to solve an engine durability problem (in order to finish first,
you must first finish). The race team devoted considerable time and
effort to developing a dynamometer test that duplicated the problem
seen in the field. They then conducted 47 different dyno tests with
test oils before solving that problem and a subsequent problem with
piston pin bores. To an old “bucks down” drag racer this was like a kid
being given the keys to the candy store.

Eventually the
inevitable question came up. Can engine oil be used to produce more
horsepower? It has long been known that lower viscosity (thinner)
engine oils can produce more horsepower, because thinner oils reduce
the power required to drive the oil pump. However, most racers utilized
thicker engine oils, because they felt thinner oils sacrificed too much
engine durability.

Testing showed that engines survived well
on oils much less viscous than racers were currently using. And
horsepower was increased on the order of 2-4%. Savvy engine builders
who learned to reduce engine bottom-end clearances to maintain
sufficient oil pressure learned they could run even thinner oils and
gain still more horsepower. In the old NASCAR “qualifying engine” era,
we developed some ultra thin oils, but those engines only had to live
for a few laps.

Our extensive development work then focused
on evaluating base stock and additive effects on both horsepower and
durability. Synthetic base stocks have a slight edge over mineral oil
base stocks, because they generally exhibit a lower coefficient of
friction (think more slippery) than mineral oil stocks. But the word
“synthetic” isn’t magic.Some synthetic base stocks aren’t measurably
superior to mineral oils, and they are much more expensive. The key is
to utilize dyno testing to maximize horsepower and race testing to
guarantee adequate engine durability. It’s a delicate balancing act!

There
are as many additive effects as there are additive combinations.
Working for the world’s largest independent fuels and lubes additive
manufacturer proved to be very advantageous in this regard. A dedicated
R&D team was created to look at the horsepower potential of every
additive in our repertoire, no matter how expensive. Typically, engine
oils are formulated to very restrictive cost targets dictated by the
oil marketer. As you know, race teams don’t concern themselves so much
with cost; they need horsepower to enable victories.

Before
discussing additive effects, I should briefly mention the major types
of chemistry in typical automotive (let’s exclude Diesel for now)
engine oils. Approximately 15% of automotive engine oils are chemical
additives such as:

1. Antioxidants – The most
cost-effective antioxidant is zinc dialkyl dithiophosphate (ZDDP), but
many more, higher cost antioxidants also exist. ZDDP works by
decomposing and creating a sacrificial film on the surface it is
intending to protect.

2. Extreme Pressure (EP) Agents – Again ZDDP is the most cost-effective, but others exist. Most others are very expensive compared to ZDDP.

3. Detergents –
Detergents are usually combinations of a rare earth metal and an oil
soluble tail. Detergents are very basic and are used to control
high-temperature deposits, oxidation, and oil acidity. Typically, the
longer the oil change interval, the more detergent is required.

5. Friction Modifiers – There
are several chemicals which can be used to reduce engine internal
friction. Typical passenger car engine oils contain small amounts to
improve fuel economy, but since they are very expensive chemicals,
passenger car oils don’t use a lot of friction modifiers.

6. Viscosity Improvers –
All oils thin as they are heated. The amount an oil thins as it is
heated is inversely expressed as its viscosity index (VI). The ideal
oil wouldn’t thin at all as it is heated, so one should search for oils
having the highest VI so they will thin the least as temperatures
increase.

VI improvers have a down side, because most of them
are not very thermally stable. Engine oils intended for use at
extremely high temperatures should use as little VI improver as
possible. Synthetic oils have an edge here since they naturally have
much higher VIs than mineral oils.

Shear stability is also an
issue with VI improvers. A balance must be maintained between shear
stability and oil film thickness over the intended use of the race oil.
A VI improver that shears too much can increase wear. A VI improver
that shears too little can have more frictional drag thereby costing
you horsepower.

So, what does this chemistry lesson have to
do with racing oils? First, racing oils aren’t bound by the same
requirements as passenger car or Diesel truck engine oils. For example,
racing oils require less detergents and dispersants since the typical
racing engine doesn’t go for thousands of miles before oil changes.

This
is very fortunate since research and testing showed that both detergent
and ZDDP additives work in the same manner. Both additives produce
sacrificial films which adhere to the surfaces you’re trying to
protect. Since detergents can actually compete with ZDDPs for the
surface of the cam lobe, high detergent oils tend to give the ZDDP
additive less surface on which to be effective. This is a major problem
when using Diesel engine oils on high-lift, flat tappet cam lobes.

Secondly,
racing oils don’t have to flow readily at lower temperatures since
races are rarely run when it’s cold. Again, this is fortunate because
many of the more effective, low-cost, low-temperature VI improvers
aren’t very thermally stable. A good racing oil uses a more thermally
stable VI improver and sacrifices some low-temperature flow.

Thirdly,
racing oils don’t sell for $1.98 at your local Wally World. Cost
restraints take a back seat to performance, so the oil formulator can
utilize much more of those expensive anti-oxidants, EP agents, and
friction modifiers than would be used in commercial passenger car and
diesel oil formulations. How much difference can racing oils make? In
the case of one NHRA Pro Stock team, a well-formulated racing oil
produced 23 horsepower more than what they had been using. What would
you pay to get 23 more horsepower?

So how can the Engine Builder
reader use all of this lube oil knowledge to purchase the best racing
oil for his application? First, never question the sponsor. If he gives
you free oil and a bunch of money, then he must be right! However, two
of the race teams we worked with told their oil company suppliers, “We
will allow you to sponsor our car, but we reserve the right to run
whichever oil our R&D says produces the most power.”

Secondly,
don’t try to produce your own racing oil. ZDDP supplements have existed
for decades, but most people don’t know the secret of blending ZDDP
into oil. If the oil is cold when the ZDDP is added, the ZDDP won’t go
into solution. If the oil is too hot, the ZDDP will decompose before it
ever gets to the parts you were trying to protect. And “No,” I’m not
going to tell you what the blending temperature should be.

Beware of the person who comes to the game
offering a “pinch of this and a dollop of that.” Racing oils aren’t
designed that way. Let me give you an example. I’m one of the inventors
of a well-known “Hot Rod Oil.” It contains a proprietary additive to
prevent rust formation when engines are stored over long periods of
time. No other additive company has this additive.

You just
can’t develop oils quickly if you are trying to do it from a
technically correct point of view. Try to locate the people who did the
original design and test work. Look for the oil marketer who has spent
years developing his product line and refining it. And remember no one
understands oil chemistry as well as an oil chemist.

I also
need to help you decide which viscosity grade to utilize in your
engine. First, every rod and main bearing journal is a little oil pump.
You would be surprised at how little oil pressure you need if you are
certain you are getting adequate oil flow to all of the bottom end
bearings. An engine’s oil pressure is determined by the total oil
pressure at the oil pump outlet minus all of the internal leaks in the
engine. The faster your engine spins and the less your rod side
clearance (cheek clearance), the less oil viscosity you need.

However,
don’t jump off the bridge. Try an oil one or two viscosity grades lower
than what you are currently using ( for example try a 10W-30 instead of
a 15W-50 ). Upon engine teardown take a look at critical lubrication
points (cam lobes, pushrod tips, etc.) to make sure you don’t have any
issues. If you are satisfied, try dropping viscosity again. If you have
a short stroke, high revving normally aspirated engine, you might be
surprised at how low you can go in viscosity before suffering
durability problems.

Most operators of blown engines are more concerned with keeping parts off the pavement than with making more horsepower.

I
was also asked to comment on break-in oils. Mineral oil based break-in
oils have two major advantages over full synthetic racing oils. First,
they are much less expensive. Those of us who like to break-in an
engine rather quickly and then remove the oil change filled with metal
particles and other debris (both visible and invisible) can do it more
cheaply. Secondly, as I said before, full synthetic oils tend to be
“more slippery” than mineral oils. I’m certain your engine will
break-in on either oil, but it should do it more quickly with mineral
oils.

If you’re concerned about engine durability with
break-in oils, don’t be. I’ve personally observed two blown alcohol
engines dyno at 2,500 horsepower each on an SAE 15W-50 break-in oil.
Both engines then ran several hours of racing on a synthetic racing oil
without any durability issues.

John Martin is a
“motorhead” physicist who worked for Lubrizol for 25 years, and before
that he worked for Shell. He has formulated and tested racing oils for
NASCAR and NHRA Pro Stock engines for decades. He has 22 patents to his
credit through his work on engine and driveline testing and
optimization. He is currently building a fuel-injected 692 BBC for his
street rod. 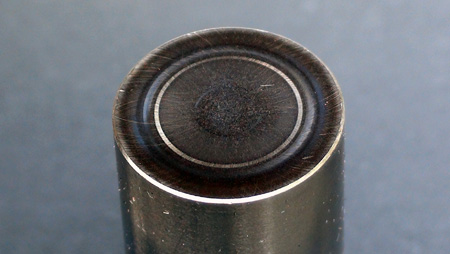 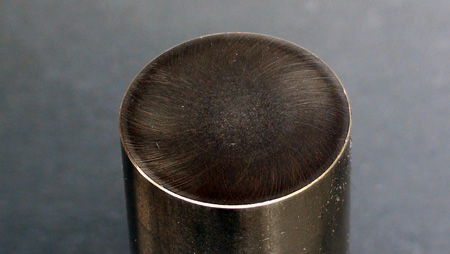 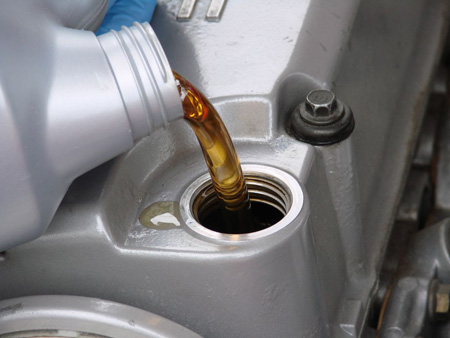