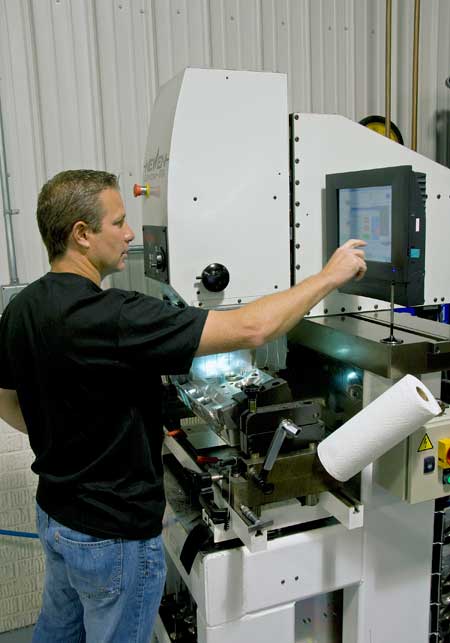 James from Fisher Racing Engines re-establishing the cylinder head seat finish dimensions on this CNC machine. Each cylinder data is in the computer files of this machine. Just because they build for grassroots doesn’t mean they are low-tech.

Since most people who are involved in racing do not run in NASCAR Sprint Cup, IndyCar or NHRA Top Fuel, we think that it is fair to say anything below these high profile professional racing series is a large group of grassroots racers who support the industry through the dollars they spend, not the sponsorships they bring or TV ratings.

Granted, there may be a fairly large swing in the amount of budget it takes to run in a particular grassroots racing division, but when you have more gentlemen racers than pros, it’s still the same as hobby stock or local dirt car or even a local karting club. We open up our archives and look back at some grassroots engine businesses and the markets that they cover.

Charlie Fisher, uncle of retired IndyCar driver and team owner Sarah Fisher, raced sprint cars from the 1970s until 2000. Since his retirement from active racing, Fisher and his team have produced wining race engines, mostly for sprint car customers.

Fisher recently spoke with Engine Builder contributor Bill Holder about the business of building racing engines, which he says consists mostly of customers running 410 outlaw sprint cars and 360 ASCS. But he says about 10 percent of his builds are dirt late model motors.

FRE has kept quite diversified by building some engines for asphalt, NASCAR Truck motors, as well as some ARCA engines. They’ve also built asphalt super late model engines and even done drag motors. Fisher says it’s turned into a little bit of everything but FRE’s bread and butter has been sprint car motors.

His three-man operation consists of son James, who definitely has the old man’s genes, and Daryl Lester. And they’ve kept the business manageable with three full time people and two additional part timers – but they keep pretty busy building about 80 engines a year.

If you looked up “grassroots racing” in the dictionary you might see dirt modifieds at the top of the list. Engine Builder columnist Jim Walbolt says modifieds are mainly from the International Motor Contest Association (IMCA), but there are other modified sanctioning bodies that are somewhat the same with only a few slight differences.

While modifieds may be the epitome of grassroots racing, some may argue that it comes at the engine builder’s expense since many of these classes run crate engines or use rules that keep costs down but also keep engine innovation out.

IMCA is the oldest active automobile sanctioning organization in the U.S., which started in 1915 by J. Alex Sloan. The automobile was a fairly new invention but Sloan had the vision to see a future in racing them. That vision continued into 1979 when Keith Knaack, who owned the series at that time, introduced the modified division.

IMCA modifieds are the largest single class of race cars in the country. One reason for this is because it is an affordable racing division to get into due to its unique rules. Of course, the “claiming” rule is one of the rules that IMCA is most known for.

Another unique aspect of IMCA is that any racer can compete for the national championship by gathering points at his or her home track without the need to travel all over the country. Rick Stout did this in 1995, racing out of the Crystal Speedway in Crystal, MI, one of two IMCA sanctioned tracks in Michigan. IMCA modified racers can also compete for a regional or state championship.

As an engine builder and partner with Bill Davis, Sr. in Iowa, Axel Andreasen saw both sides; they had 100 engines claimed in 6 years in IMCA Modified competition. In that 6-year period, they seldom raced less than 60 nights each season and found the winner circle nearly 50 percent of the time. They won 2 IMCA National Championships during that period. During their best season, they won 31 races and had 19 engines claimed.

According to Andreasen, in 1989 they probably averaged about $750 – $800 building each engine. The claim rule rule in 1989 was $325 and was increased to $525 during the mid-2000s. Sadly, Andreasen passed away recently. He was the Engine Shop Manager at JR Motorsports for many years.

His business says George’s Speed Shop Precision Racing Engines, but according to Bill Holder, that doesn’t provide much of a clue of who George is or what he does. Holder says you might be surprised to learn that the George in this case is “Ohio George” Montgomery, a legendary NHRA national driver and engine builder.

Montgomery’s racing career started in 1955 when he put a ’59 Caddy engine in a ’34 Ford Coupe and competed competitively in the Top Eliminator Class in NHRA regional events. Then, in 1958, he bought a ’33 Willys for $100 and equipped it with a Caddy engine.

Competition for Montgomery began in 1959 when he had a number of NHRA class wins through the 1961 season, including the Nationals Little Eliminator Class in both 1959 and 1960.

His success as an engine builder has been described with a number of adjectives, according to past and current customers, including innovative, persistent, smart, self-taught and flexible. No challenge was ever too complex to be addressed.

When he retired from racing in the mid-1980s, his son Gregg joined the scene, helping his dad at his modest Riverside, OH, facility.The apple didn’t fall far from the tree with Gregg who certainly inherited his father’s engine building skills.

The younger Montgomery has been around his father’s shop since he was five years old and doing useful jobs. By the time he was 17, he could operate all the machines in the shop.

The elder Montgomery says certain realities have to be taken into consideration when discussing a new engine build for a customer. “I don’t immediately start to think about how the engine should be built in order to accomplish the customer’s desired result, because the real question is cost,” he says. “The first thing I always ask is ‘How big is your budget?’ That immediately defines a lot of the parameters of the engine. Rarely does somebody come in here with an unlimited checkbook

It’s hard to be anymore grassroots than karting. It is where most pros begin their career these days and also where many never really leave. Karting is affordable to many, and offers a great way to get into motorsports as a beginner, but also enough competition to stay in it as an experienced racer.

Engine builders have always found ways to raise the bar and help put their customers in the winner’s circle, but rules in karting in the last few years have made it difficult for engine builders to do what they do best.

The Briggs & Stratton flathead original L-head design engine is still the most popular 4-cycle engine in kart racing, according to karting experts, even though it has been out of production for several years.

Experts say that the situation isn’t getting any easier for flathead lovers because many parts and pieces, such as flywheels and sump covers, are not manufactured anymore. There are, however, some replacement parts on the market that are manufactured in China such as sheet metal and valves. Burris now makes most of the pistons for the flatheads but only has about half of the sizes that used to be available.

About ten years ago the Briggs flathead engine went for $150 at a local tractor supply store and now karting experts say a competitive blueprinted flathead goes for $1,400 – $1,600. In fact, enthusiasts say that you’d be really hard pressed to find all the parts you need today.

According to one expert, most guys are building new engines with a used sump cover and a used flywheel and as many aftermarket parts as they’re allowed. That includes piston, rod, cam, lifters, valves, springs and sheet metal all being aftermarket and carburetors from China.

There’s just so little of the original motor left, which is why it costs what it does now. It’s more expensive than an Animal engine that you can build brand new and make 50 percent more horsepower yet  isn’t as popular.

For the last eight years Briggs & Stratton and the World Karting Association (WKA) have been trying to wean racers off of the flathead because they are no longer supported or manufactured for industrial purposes.

Flatheads were no longer a good seller and have faced restrictions from the EPA, which kind of forced Briggs & Stratton to go into the overhead valve market (OHV), a market that Honda has dominated for years on the OEM side, said one karting expert.

Chances are if you bought a generator or power washer or some other industrial piece of equipment, it came with a Honda OHV engine. The Honda 5.5 motor completely took over that market, so Briggs addressed that with their Intek series of OHV engines, which is OHV.

HPBG:Grassroots Engine Market – The Grass MAY Be Greener