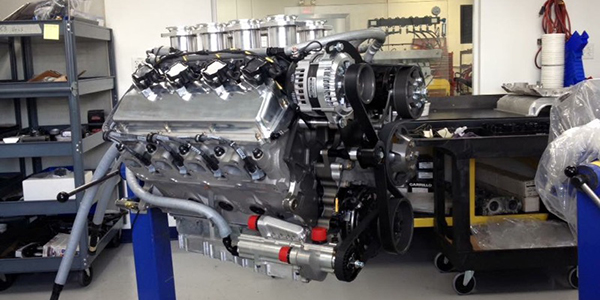 After 543 miles of endurance desert racing, there are only a handful of engines that complete the journey, unless of course that engine was built by Kevin Kroyer of Kroyer Racing Engines. The engine shop’s 455 Ford Trophy Truck engine nabbed three of the top four spots at the 2018 Baja 500. Find out what goes into making this 455 Ford one tough performance engine.

Recently, we got a chance to catch up with an older acquaintance of the magazine when we spoke with Kevin Kroyer of Kroyer Racing Engines. Back in 2013, the Engine Builder staff and a panel of industry professionals selected Kroyer Racing Engines as the “Performance Engine Builder of the Year.” With nominations now open for the 2018 award, the timing to speak with Kroyer again seemed fitting.

Kroyer Racing Engines is located in Las Vegas and focuses on off-road engine work for Trophy Trucks in the SCORE International and Best In The Desert series, as well as some short course racing in the Lucas Oil Off-Road series. 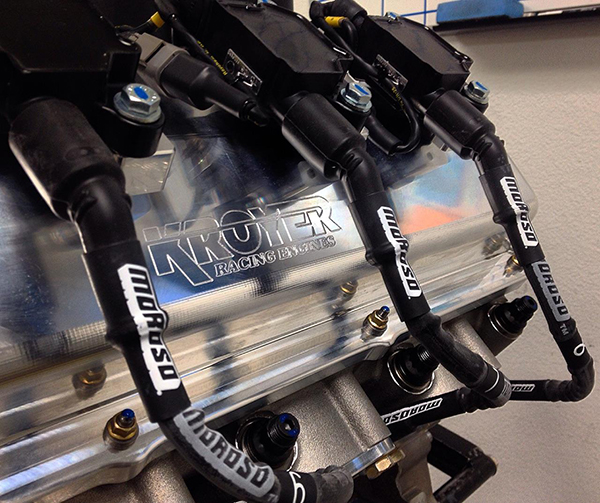 Kevin Kroyer has been involved in racing since he was a kid, getting his start building engines after he answered an ad in a local off-road trade magazine for Walker Evans Racing. He became a Walker Evans mechanic in 1989 and spent 10 years at Walker building various forms of small block and big block Dodges, doing V10 development for Chrysler, building V6 engines for the Dodge-Chrysler brand for off-road and helped Walker bring back one of the first Dodges to the NASCAR SuperTruck series.

Walker Evans actively retired from racing in 1999 and at that point Kroyer had the opportunity to move to Las Vegas and form a business building race engines for Brendan Gaughan, effectively founding Kroyer Racing Engines (KRE) on January 1, 2000. 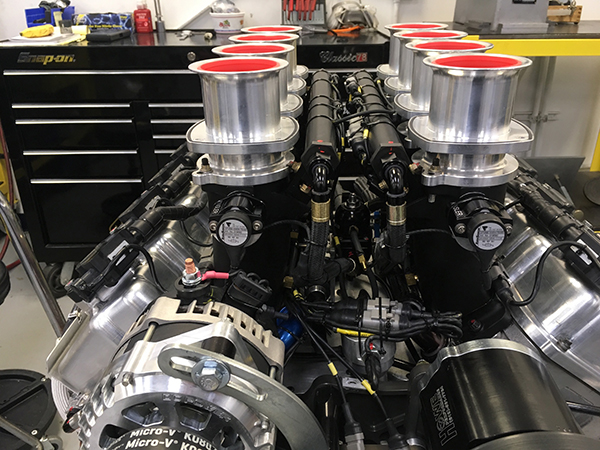 Kroyer’s engines for Gaughan were used in the NASCAR Craftsman Truck series. At the same time, Kroyer was doing off-road trophy truck engines and transmissions. KRE balanced between Brendan’s stuff and off-road until Brendan’s NASCAR team closed down at the end of 2007 and he moved east.

Kroyer and his team were able to keep their off-road roots growing enough to where 98 percent of the shop’s business was off-road in either endurance off-road or short course off-road racing.

KRE started out in a 5,000 sq. ft. building, but very quickly outgrew that space. Today, KRE operates out of a 23,000 sq. ft. facility, which Kroyer says is due to the guys he has working for him and the talent and hard work they have given to help grow the business. 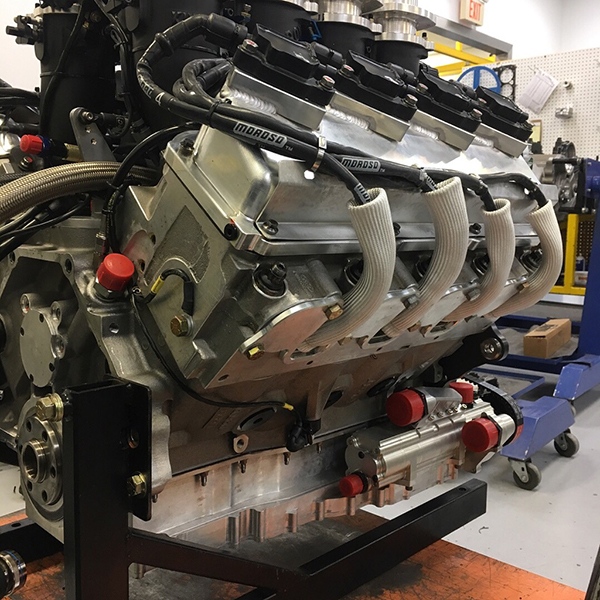 KRE doesn’t just build long blocks, but rather builds completely dressed out engines. KRE does all of the carburetion and electronic fuel injection in-house and does all its own programing and specifications for cooling systems, oiling systems and plumbing in the vehicle.

To keep this kind of in-depth program running smoothly, it takes a great deal of effort and involvement. KRE supports 25-30 races a season and there’s usually at least two team members at each of the races making sure that everything is right. 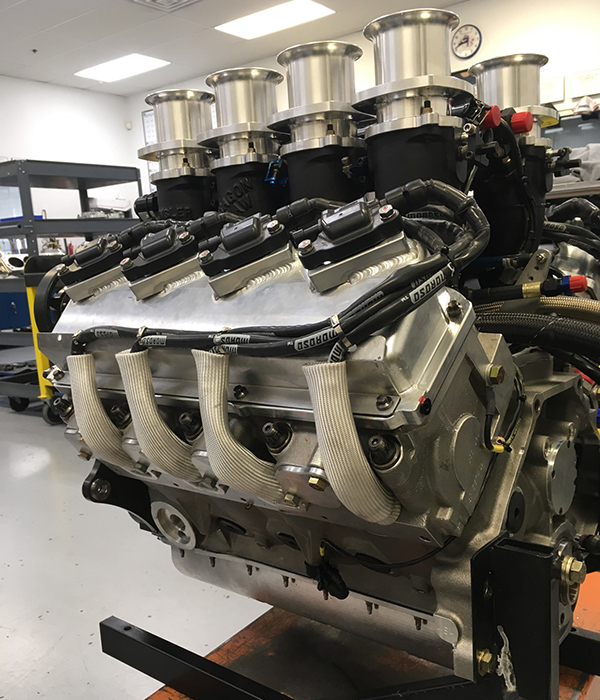 At the end of May/beginning of June, Kroyer was in Mexico for the 50th anniversary of the Baja 500, where four KRE-built 455 Ford Trophy Truck engines made the trip. After 543 miles of desert endurance racing, three of the top four finishers had the Kroyer Ford under the hood.

“We’ve got a variety of different engines that go through here depending upon the series and the customer,” Kroyer says. “For our Trophy Truck customers, we’re probably equally split among a GM-based standard bore center or spread bore center block with a plenum manifold throttle body on it, or a Ford standard bore center 455 cubic inch with a Kinsler 8-stack system on it.

“That’s the engine used for the Baja 500 that we just won. Three of the top four had the Ford combination with the 8-stack manifold on it.” 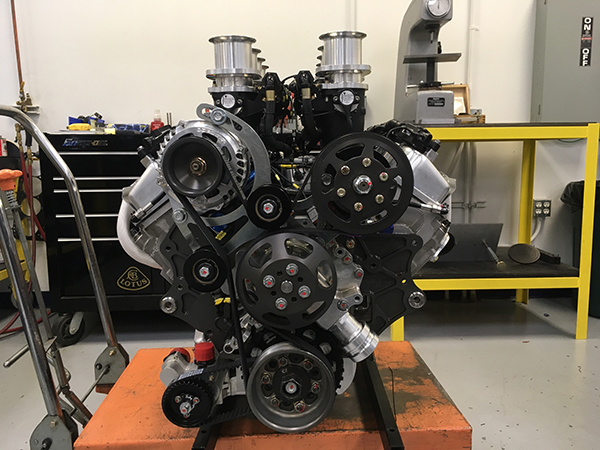 When KRE has to build one of the 455 Ford engines, the shop starts with a Dart cast block that’s bought direct from Dart Machine.

“The block goes into a series of checks and measurements,” Kroyer says. “We’ll lay out the main line and the cam tunnel and then we put it in a 4-axis CNC machine where we install lifter bushings, sleeves, decking and any kind of block modifications that we need – stroker clearancing and such – it’s all done in a 4-axis CNC.”

KRE will also buy the 455’s D3 Ford cylinder head castings from Roush Yates, which are then typically CNC ported by Ultra Pro Machine. From there the shop will do a final valve job and some grinding and decking to the cylinder heads. 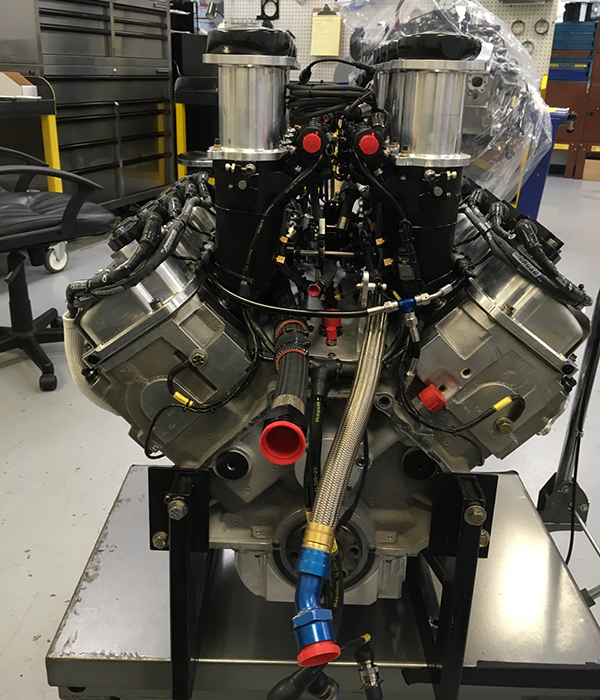 “We use Bryant cranks, Carrillo rods, typically JE pistons and the Kinsler manifold that we modify,” he says. “We work with a front serpentine belt layout that we put together. We deliver a completely assembled engine with an inner power steering pump on it and all the drive belts on it. We work with a company to do custom wiring harnesses. We do multiple sensors on these engines – two crank reference sensors, two camshaft sink sensors, a TPS on each manifold, dual map sensors, and we have built-in redundancy with automatic sensor failure detection and hot swappable sensors as part of the electronics package that we offer from Motech. 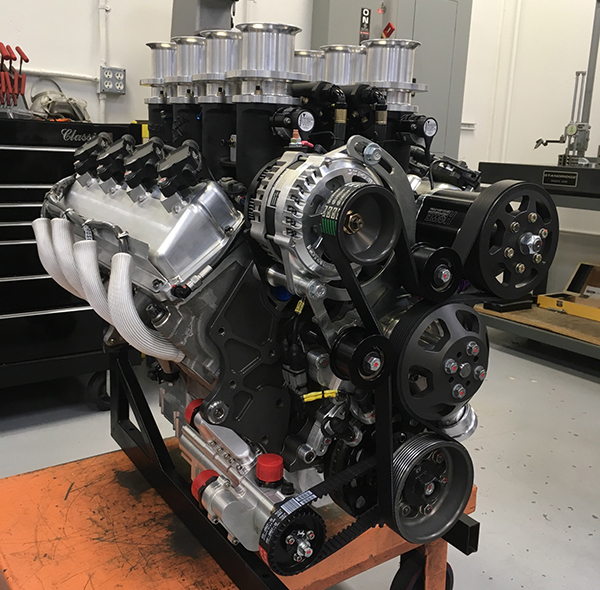 Within its 23,000 sq. ft. of space, KRE has two in-house engine dynos and a chassis dyno. Everything the shop builds goes on one or more of the dynos for testing.

“One thing that is key to our success is that we have taken a full vehicle approach,” Kroyer says. “So besides having the engine dyno, we have a chassis dyno so we can test all the in-vehicle systems. We do all of our own Motech ECU programming, data acquisition, PDMs and keypads, which is all part of a control strategy to be able to do functional sensor testing, and controlling temps and fans and stuff like that. 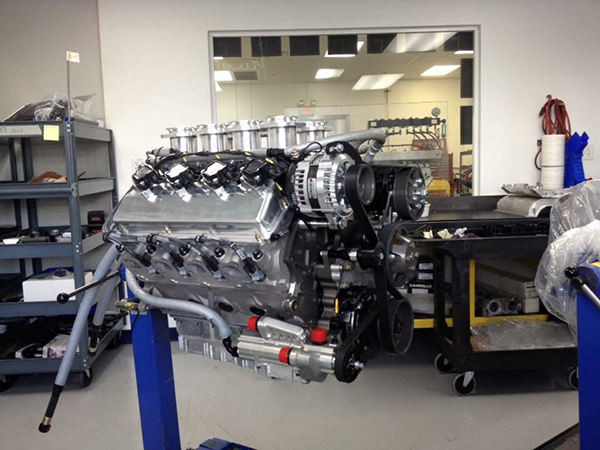 “We also have an in-house partner in GearWorks, which is our partner in building our turbo 400 automatic transmissions, converters, rear end gears and drive shafts. So we’re looking at all aspects of the vehicle.”

All of that testing results in a 455 Ford Trophy Truck engine that features 820 horsepower, 700 lb.-ft. of torque and a relatively mild compression ratio at about 12.6:1. 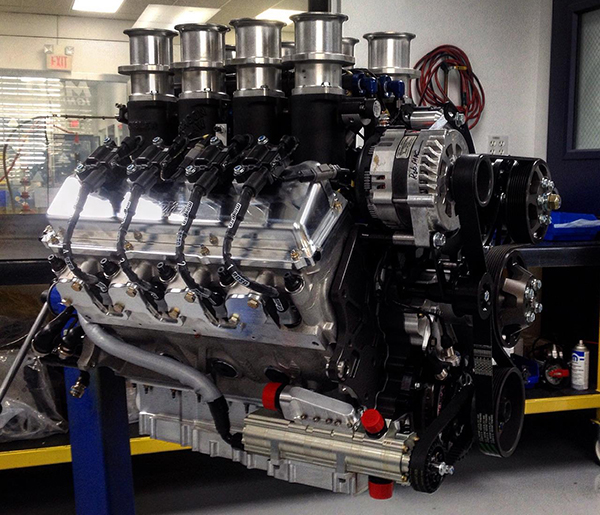 “These are endurance engines that have to run, in some of the longer races, upwards of 24 hours,” he says. “That’s why we make sure we go through every aspect. It helps with our success. The most important aspect of building an engine is watching your efforts translate into a win.”