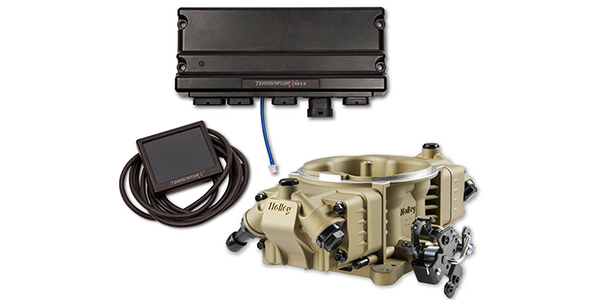 Holley has announced it has expanded the popular Terminator X platform to allow compatibility with even more applications.

Holley’s new Stealth 4150 models resemble a Holley XP carburetor but have four 100lb./hr. injectors hidden inside the throttle body. The external ECU can be fully programmed with four inputs and four outputs as well as the ability to handle a single stage of nitrous, or integrated boost control. Following that up, Terminator X MAX systems have been announced for both Gen III Hemi Drive-By-Wire and Ford Modular 2V/4V platforms.

Terminator X MAX – Gen III Hemi (Drive-By-Wire)
Introducing Terminator X and X Max Kits for Chrysler GEN III HEMI engines from 2003-2013+ such as the 5.7L, 6.1L and 6.4L engines with the factory Drive-by-Wire throttle body (Non-VVT applications only.) Terminator X comes fully loaded with base maps for common HEMI engine combinations to get you out of the garage and on the road/track fast. The 3.5″ touch screen LCD handheld contains an easy to use calibration wizard as well as tuning and gauge display functions.

Terminator X Max – Ford Modular 2V/4V w/ Tranny Control
Introducing Terminator X Max Kits for the Modular Ford engine and the 1998 and newer Ford 4R70W or 4R75W Transmission. These new kits will plug and play with either 2V or 4V Mod Motors commonly found in 1996-2004 Mustangs, 1995-2006 F150, or 2002-2005 Explorers. These kits will work with both 4.6 and 5.4L power plants, so no matter what your donor vehicle was, there is a standalone Terminator X EFI system for your combination.