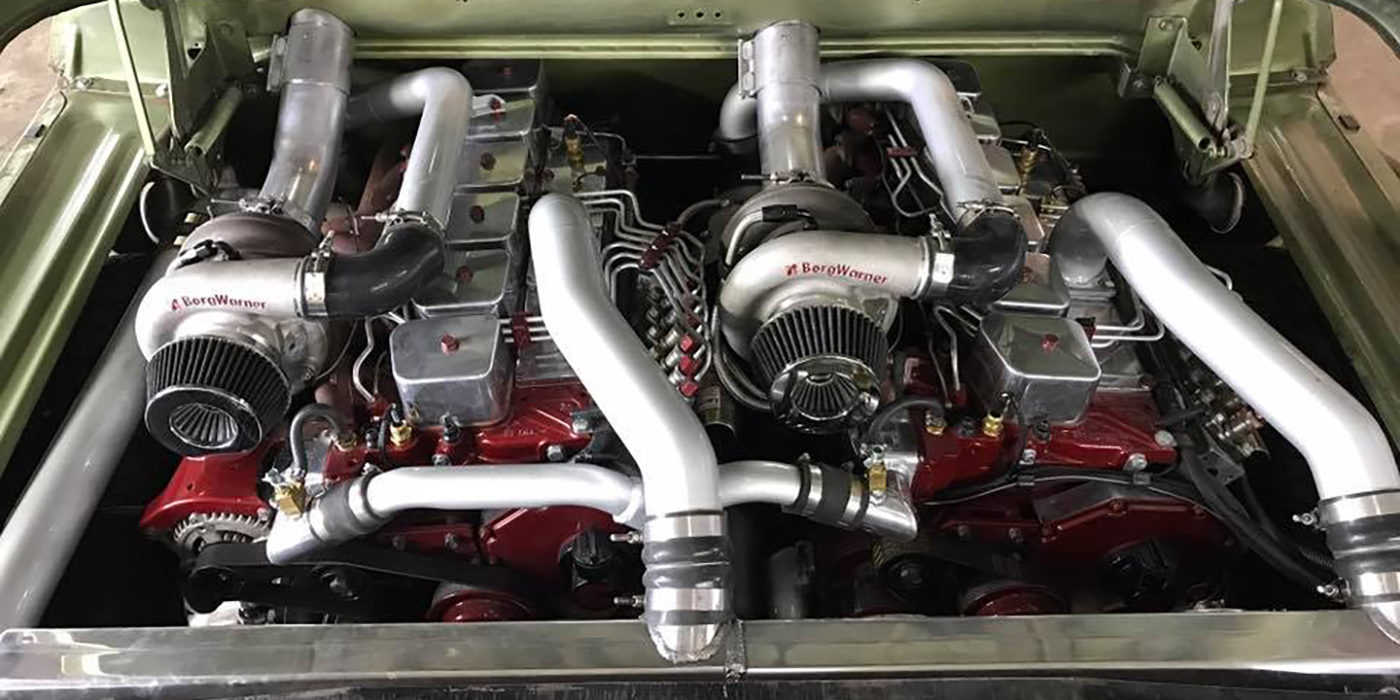 No, you’re not drunk and seeing double. There’s really two 5.9L compound turbo Cummins engines in this 1970 Dodge truck built by Plowboy Diesel. Find out how this build came about and what makes it work!

When the Mollet family, the folks behind Plowboy Diesel in New Douglas, IL, got invited to the SEMA Show a couple years ago, it was a pretty big deal for the small engine shop. The reason for the SEMA invite? The shop’s 1970 Dodge pickup with twin 5.9L compound turbo Cummins diesels under the hood!

“After SEMA, we had finally got a name for ourselves and got notoriety,” says shop owner Jody Mollet. “I feel like our shop represents all of the small guys who build things in their shop and don’t get any recognition for it. We’re out here in the middle of nowhere. We’re just farmers and there’s lots of guys who work out of their garage or their farm shop building cool stuff and nobody even knows it. I feel like we represent those small guys.”

The Mollets also run Mollet Farm, which is the primary reason the engine shop exists in the first place, but Plowboy Diesel takes on more than just farm equipment.

“We’re farmers first and foremost,” Mollet says. “We’re green farmers, so we’re always tinkering on things and building stuff. I started when I was in sixth grade and built my first truck. I was just slowly waiting for the day I turned 16 and could drive, like most boys. From that point, up until about 40, I just worked in the shop doing my thing and making money. We didn’t really build anything custom.

“One day I decided, because I was only getting older, if I don’t do some of these projects I’ve always wanted to do, I’ll just keep putting them off and never do them. That’s when we came up with the idea of the twin Cummins in one truck.”

Under the Plowboy Diesel name, the shop became incorporated just three or four years ago, but has been an engine shop for many years prior to that. The shop will do work on just about anything from tractors, cars, pickups, bulldozers, combines, and more. However, John Deere equipment, Dodge and Mopar are among the more popular things the shop sees.

Plowboy Diesel features three generations of the Mollet family helping out – Jody, his son Dakota, daughter Mallory, and Jody’s dad Mike – plus another employee named Kyle. The shop has some machining capabilities, but will send out certain jobs when things get too busy and the shop falls behind. Plowboy also recently began selling aftermarket parts.

“We’re not a big shop, but we’re moving to a new shop soon,” Jody says. “Our current shop is 40’ by 60’ and we outgrew it years ago to where our farm equipment wouldn’t even fit in it anymore. Our new shop we’re building is 72’ by 160’. The new shop is supposed to start being built the first week of July.”

The 1962 Dodge with twin 5.9L Cummins was Plowboy Diesel’s first major, full-custom build from the frame up. The idea for the build stemmed from something Jody said one day jokingly.

“We were working on some equipment getting ready for fall harvest and we had a Dodge pickup truck out here with a diesel engine in it and we just happened to open the hood one day and I said out loud, ‘It looks like you could fit two of those things in there,’” Jody says. “Of course, we went in and got the tape measure and you can’t quite fit two in it. However, we had an old green truck out in the shed that we didn’t use anymore, so we went out and measured that and we thought it was doable.”

The next day, the Mollet’s brought the 1962 Dodge into the shop and pulled it all apart, and sure enough, there was enough room for two 5.9L Cummins engines.

“Since the two engines take up all the engine compartment, the radiators were moved behind the cab in the bed,” Jody says. “We actually made and pressure checked the frame rails in order to run coolant through to the back of the truck, which has the two radiators and fans tucked under the bed, alongside the transmission cooler. The coolant passes through those and then routes back to the engines on the opposite frame rail.”

Radiator Supply House built the intercooler, the two radiators and the transmission cooler. The fuel system has a Rhodes Racing 20-gallon fuel cell and two AirDog transfer pumps. Area Diesel Service supplied the two injection pumps, the injectors and the quadruple BorgWarner turbos. The custom engineered gearbox is from Modern Machine, which is transmitting the power from both motors to a 47RE Track Master transmission from BD Diesel. Each engine has a Fluidampr harmonic balancer. Monitoring all of the functions of the two engines are 18 gauges that were compiled into five large gauges from SpeedHut Custom gauges.

“The engines are mainly stock,” Mollet says. “We’ve got compound turbos on each engine – a 57mm and a 66mm turbo. We’ve got 60-lb. valve springs in them. Together they will produce approximately 1,200 horsepower and 2,200 ft.-lbs. of torque.”

According to Jody, the truck build went together pretty smoothly and was meant to be a can-we-do-it type of build. Now it’s a conversation piece more than anything.

“Coming from a small town of 300, when we got invited to SEMA, we were thrilled,” he says. “It was such an amazing show that opened a lot of doors for us.”

Advertisement
In this article:5.9L, AMSOIL, Cummins, diesel, Diesel of the Week, SEMA