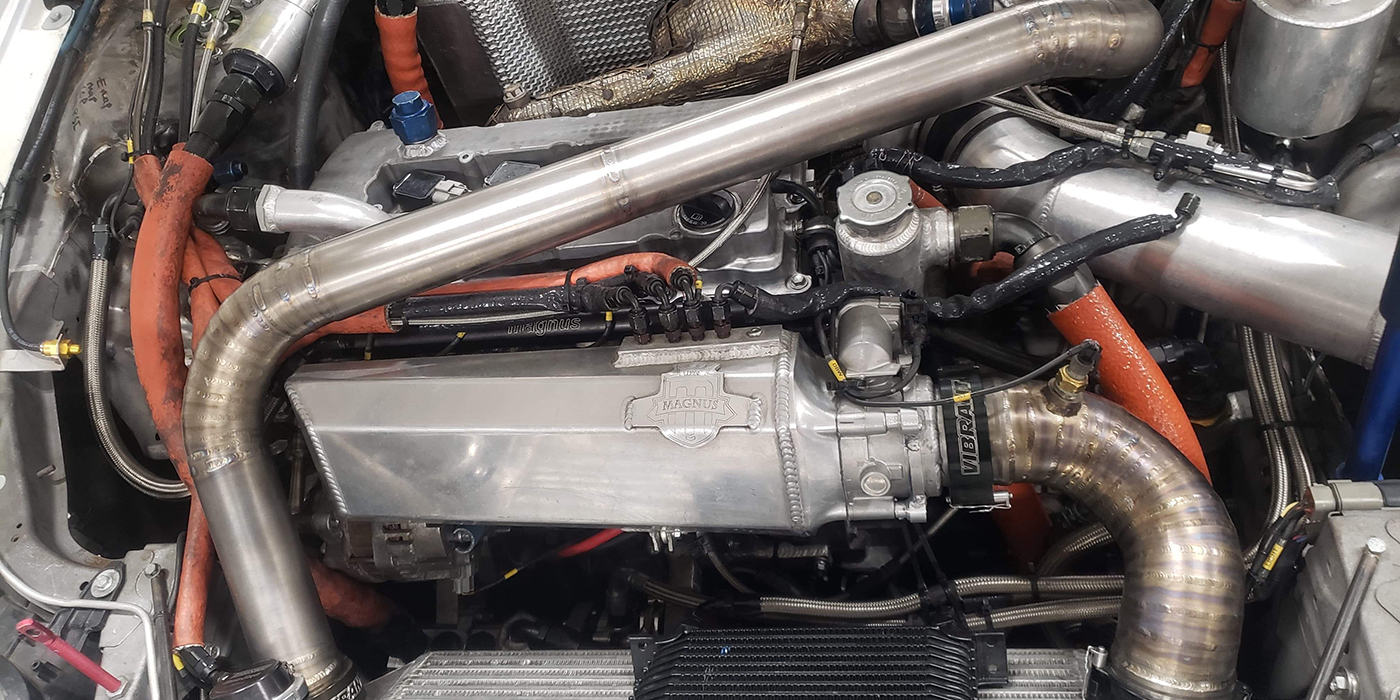 It began simple enough – a car, an idea, and a dream. The car: a 2008 Evo X. The idea: build a hill climb car. The dream: compete at Pikes Peak International Hill Climb. As many others have experienced though, simply getting to the top was not enough. Find out what went into this 4B11 engine build done by Magnus Motorsports and 4D Engineering.

With the ability to weld and fabricate and an older brother who was very into cars, Cole Duran was urged to started dabbling in the automotive industry. It only took a small nudge and the rest is history.

“I wasn’t too much into cars, but as soon as [my older brother] saw that I knew how to weld and fabricate, we started dabbling in performance parts,” Cole Duran says. “When I got started, you didn’t have the ability to just go online and buy bolt-on parts, you had to fabricate everything.”

Duran was self-taught and it wasn’t long before his talents led him to open his own fab shop in Grand Junction, CO called JC Fab Works in 2012.

About a year after opening JC Fab Works, Cole was offered a lead fabrication spot at Revolutions Performance in Colorado Springs, CO. It was enticing enough to close his shop down.

“I worked for Revolutions Performance from 2013 through 2016,” he says. “After a little while, I decided to branch back out and get back to running my own shop. In 2017 is when I branched out on my own with JC Fab Works again. I just recently changed the shop name to 4D Engineering about six months ago.”

The shop’s new name, 4D Engineering, represents himself and his three boys, and was put in place to get rid of the misconception that Cole only did fab work. In fact, the new and improved shop does full, ground-up builds, chassis work, turbo systems, cooling systems, installation of dry sump systems – pretty much everything race car related – including engine work.

“JC Fab Works didn’t really cover everything we do at the shop,” Duran says. “That’s why we made the change to 4D Engineering to better cover what we do as a shop. What really prompted the name change was I ended up taking the crew chief position for Boyd Auto Racing and they’ve got an Evo 10 that they were interested in building as a hill climb car.

“When they started with the car back in 2016, I helped out on the side. I didn’t have a lot to do with the car. I would just fabricate parts as needed for them, and then I took over that position as crew chief, so I started branching out with what we do as far as our shop is concerned. We now do braking systems, oiling systems, wiring harnesses and all of that. The car basically started out as a bolt-on vehicle, and over the years, we’ve developed it into what it is now.”

4D Engineering is located in Colorado Springs, CO, right at the base of Pike’s Peak, which has been a big advantage in terms of getting racing customers to frequent the shop.

“With us being local to Pike’s Peak, there’s been other race teams we’ve built a relationship with,” he says. “We actually shut down for the month of the Pike’s Peak Hill Climb and I house a few race teams at the shop. This year we had six different race teams in the shop at one time.”

Given the shop’s focal points and its proximity to Pike’s Peak, 4D Engineering specializes in time attack and hill climb applications with a focus on Mitsubishi Evo and Subaru builds.

“As far as like the time attack stuff and the hill climb stuff, we’re big time fans of the Evo 10,” he says. “The 4B11 is a fantastic power plant. It’s proven to be extremely reliable. We like it much more than the 4G63. It’s easier to keep cool and it does have its downfalls with the exhaust manifold being on the back, but we’ve found ways around that heat management to keep that thing cool. We definitely specialize in the Evo 10 4B11 platform and then the Subaru platform as well is something that we’ve done a ton of work on.”

Aside from Cole’s other work at 4D Engineering, he gets help on the Boyd Auto Racing team’s Evo X from three other guys – Dominic Tapia, Nick Jesaitus and driver Derek Boyd. Their goal is to take their 2008 Evo 10 and compete in the Time Attack 2 class at the Pikes Peak International Hill Climb.

“Having a car that you can race Pikes Peak on Sunday and then drive to work the following Monday sounded pretty novel at first,” he says. “Then we accepted the reality that to have a hill climb car first meant abandoning all comforts of a daily driver. This is not to say that a car cannot be a daily driver and a capable track car. It just means that some of these compromises were not feasible for us.”

Under the hood of the 2008 Evo X, the shop utilizes the 4B11 engine, and they actually have two engines at the ready so they have a backup engine in case something happens.

“When you start pushing these four cylinders to the power levels and the abuse that we do, it’s always good to have a backup,” Duran admits. “Both of them are identical. Magnus Motorsports is a big sponsor of ours. He actually tunes the car for us, so they are Magnus Motorsports long blocks. Both of them have 4 Piston CNC’d cylinder heads with GSC 272 cams. We do run the Magnus Motorsports MIVEC delete on the intake and exhaust. It has Ross racing pistons and we run an 86mm bore and a 94mm stroke.

“Both engines are equipped with a dry sump oiling system from Magnus Motorsports. We also run a custom, in-house turbo kit. And, to keep the car cool, we put Inconel heat shielding on all of the exhaust ports and the turbine housing. That’s probably been one of the biggest turning points of what we’ve done for keeping the car cool. Prior, we’d make one pass up Pike’s Peak and it would just cook. Any heat wrap we had on it would basically just burn to the point of disintegrating.

“We do have a sponsorship through Garrett turbochargers. They just sent us out a G35-1050 and a G35-900 to try out. We’ll actually start playing with those during the next couple of weeks. In this year’s Pike’s Peak Hill Climb, we ran the Garrett 3584 RS, and that thing was fantastic. It was a little laggy, but it managed to maintain a solid 20-lbs. of boost, even at 13,000 feet.

As mentioned, keeping the car/engine cool during a demanding run like the Pike’s Peak Hill Climb requires a robust cooling system, which 4D Engineering built in-house.

“It has a custom dual pass radiator,” he says. “To keep the car cooler, we actually run mist sprayers and those are based off the throttle position. Anytime the driver hits anything over 70% throttle position, we have a 150-psi water pump that pumps mist onto the oil cooler, the radiator and the intercooler, and it’s working fantastically.

“Our ECU tells us that by the time we got to the top (of Pike’s Peak), the oil temps were still at 220-degrees F and the coolant temps topped out at 189-degrees F. Our air intake temp was only 89-degrees F.”

The 4B11 engine has done a great job of holding up to the demands of Time Attack, and Duran says that outside of the pistons, cams and connecting rods, they’re very basic engines. But, basic or not, 4D Engineering and Magnus Motorsports have these identical 4B11 engines humming to the tune of 600 hp on just 20-lbs. of boost.

“That is uncorrected for sea level,” Duran says. “We only care how the car is going to run here. When we do go down to sea level, we see upwards of 750-800 horsepower.”