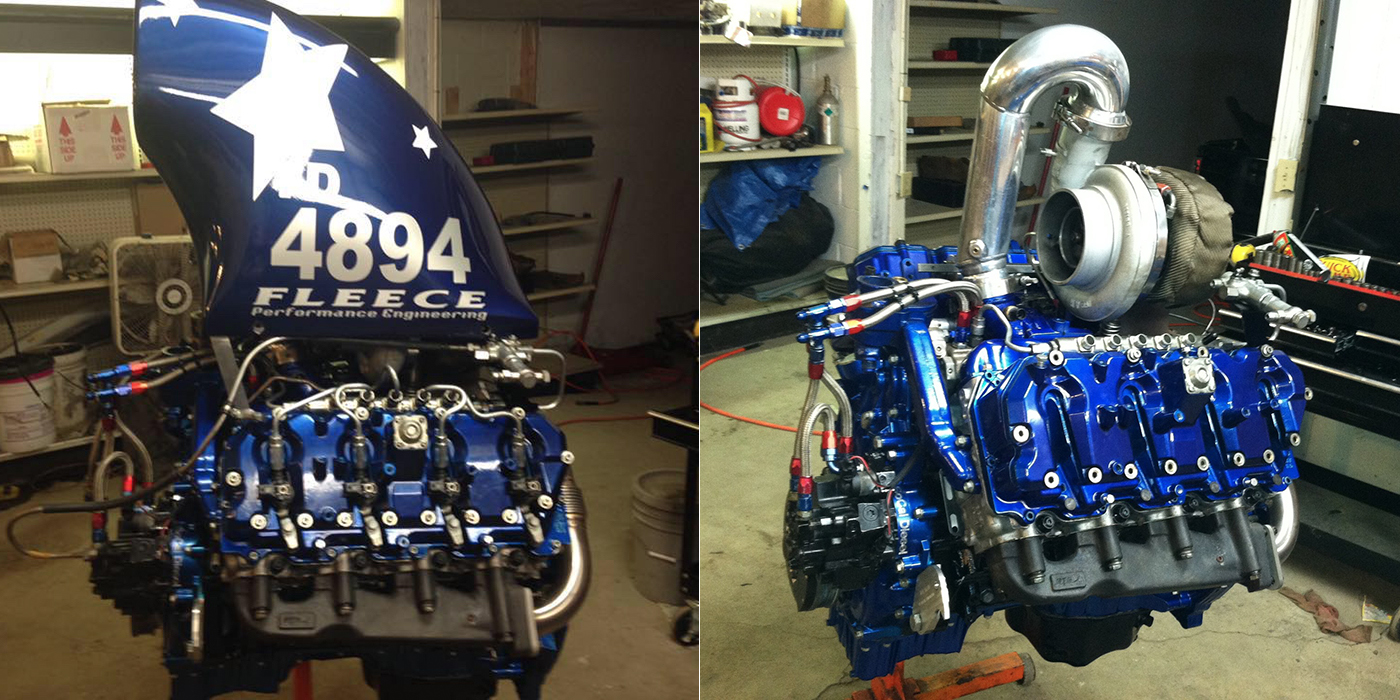 Having carved out a niche in Duramax engine work, Jeff Dean’s shop, On Track Automotive & Diesel Performance, showcased what a single-turbo LBZ Duramax engine could do as the diesel performance segment grew. Find out what went into this Top Diesel dragster build.

As diesel performance came into its own in the early 2000s, engine builders who had an interest in this arena got caught up in the power potential, the fun, the chance to learn something new, and the joy of experimenting with industry firsts. That was certainly the case for Jeff Dean, owner of On Track Automotive & Diesel Performance located in Lancaster, OH.

“In the early 2000s, I started seeing these diesels and going to truck pulls and drag races, and I remember thinking, ‘Man, that’s pretty unreal that these guys can make the power they’re making and drive them and use them,’” Jeff Dean says.

Jeff has been in the engine building industry his whole life, having worked for a Corvette shop back in the late-‘80s, then spending nearly 12 years at Jegs, as well as racing and travelling the country. He started On Track Automotive & Diesel Performance in 2003 by doing both gas and diesel performance work.

He used to build a lot of big block Ford and Chevy engines for truck pulling classes with 510 cid and 585 cid limits. He also found an appreciation for the Duramax engine, but it wasn’t until he bought a new truck in 2006 – an LBZ regular cab – that he jumped into diesel performance with both feet.

“I wanted the 2006 LBZ regular cab truck specifically for racing and truck pulling,” Dean says. “I got fairly competitive. In 2008, I was invited to the Diesel Power Challenge out in Utah and finished fourth. I felt pretty good for being a little guy.

“In 2009, I actually built a good motor for the truck with aftermarket rods, pistons, injectors, dual CP3s, ported heads – the whole deal. That set up set a national record in the Super Street class for a short time. I truck pulled on and off, but I always gravitated more towards drag racing. I just liked it more.”

Jeff’s shop has a couple of employees today and is 4,400 sq.-ft. of space. He still does some racing himself and builds a few gas engines here and there, but Duramax engine work has been the shop’s primary niche. On Track is known for the Duramax platform and fixing the problems that they have. However, Jeff’s claim to fame with the Duramax was the setup he ran for years in his Top Diesel dragster.

“In 2011, I built a dragster,” he says. “I essentially used that built motor from my truck and put it in the dragster. I put a Power Glide tranny in it. To run the Power Glide, I used about 15 different torque converters trying to get it to work right. The one that worked the best for me was a company called PTC – Performance Torque Converters – out of Alabama. I started running it a bunch and got a sponsor and started traveling around running in Top Diesel.”

Jeff says he was pretty competitive for a while having come in first place in one diesel organization and second in another over the years. It was that diesel spirit of having fun, learning and experimenting that led to Jeff’s Duramax success.

“We had a good time,” he says. “I won quite a few races. My racing philosophy is a little different. I want to win. I don’t care about records. A lot of guys always wanted to set a record or be the world’s fastest or whatever. It was more promotional for them. For me, I didn’t care about that. I wanted to win and do whatever I could do to win or make it work better to win and be reliable. That’s what I wanted.”

According to Jeff, the Duramax also utilized factory rocker arms, 250% over S&S injectors, ATS manifolds and up pipes, and a unique dual CP3 set up.

“One thing that was kind of cool that I had done that had never been done was the CP3 on a Duramax,” Dean says. “To mount a dual CP3, it kind of hung off high and to the left side of the motor. With the dragster, it just looked like an afterthought and didn’t look good. I figured out a different way to mount it and make it work.

“We noticed the hole for the water pump, and since we weren’t running a factory pump and running electric, we were able to put the CP3 there instead. One of my machinist friends made me a mount. It took three or four tries to get it right and get the gear alignment and everything correct, but I was the first to run a reverse rotation CP3 and a timing cover on a Duramax. That was just simply because I didn’t like the way all the other stuff looked.”

Jeff says Fleece Performance also helped with that aspect of the build because it took a special pump to make that happen, which they helped put together. Fleece also delivered on the Duramax’s single turbocharger.

“Turbo-wise, I run a Fleece Performance S480 single turbo,” he says. “The reason for that was again to keep it simple. With the diesels, back then especially, it was hard to spool them. A lot of these guys would have trouble getting off the line. For me, I wanted it to be raceable, just like a gas motor, so I run a fairly small turbo, but I could light it immediately. I could bump in, be wide open and leave. That was where I would do well against a lot of competitors, because I could cut a light and the car would react and I could get out on them. Then, it just depended on whether they could catch me or not.”

With all the aftermarket components and some custom-made aspects to the LBZ Duramax build, the engine was capable of 1,000-1,100 horsepower.

“It wasn’t huge power, but I was going more for reliability,” Dean says. “I never had an issue with the motor ever in five years of racing that thing. I never had an issue. Could it have been faster? Yeah, but I play the odds. I knew my chances were better to win by making the engine work, so I never pushed it as hard as I could have.”

If you ask us, winning is winning, no matter how you get there.