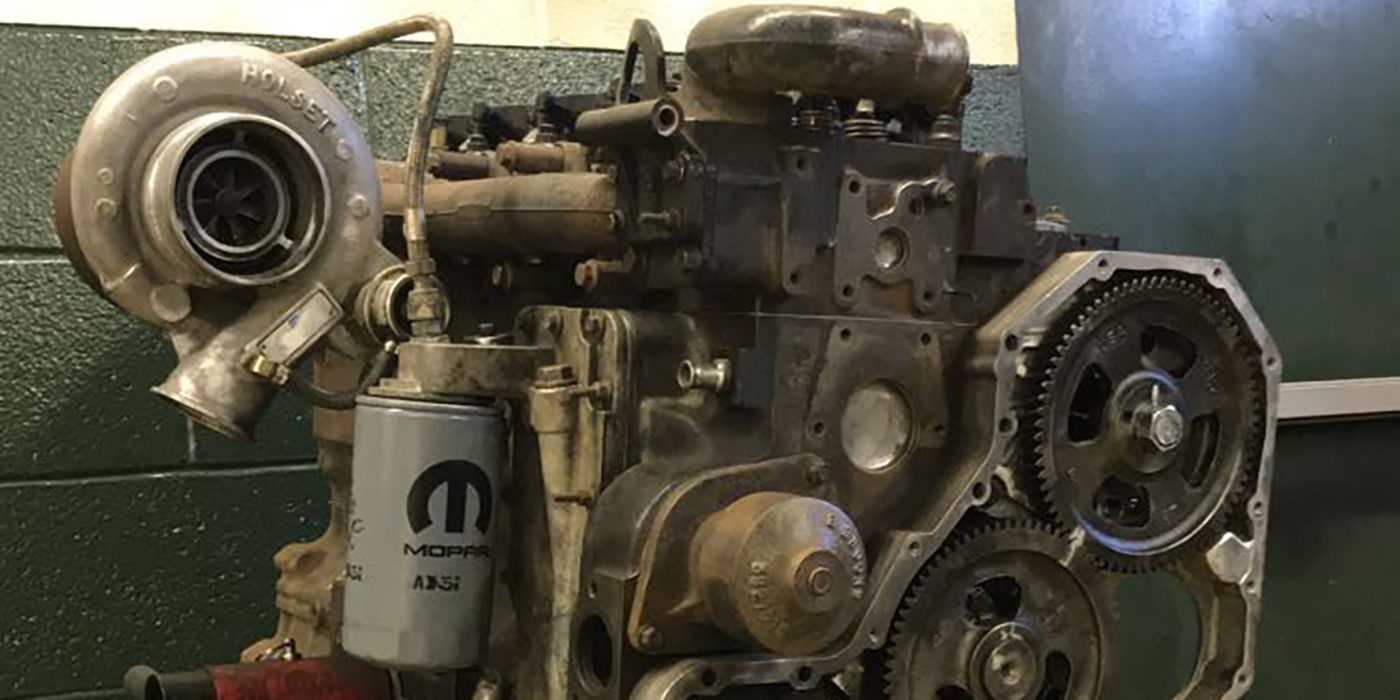 Ethan Powell of Freedom Diesel Performance has a 1960 Cadillac Coupe de Ville he wants to turn into a fun street vehicle he can bring to car shows. So what did he put under the hood? This 24-valve 5.9L Cummins engine of course! Find out what went into the build.

Growing up, Ethan Powell was one of those kids who enjoyed tinkering on dirt bikes, motorcycles and really anything he could take apart and put back together again. Ethan took his mechanical aptitude into construction where he worked as a laborer and operated excavators and rock trucks.

“Dealing with that, you get some break downs and unexpected failures, and it was a small company, so we didn’t have a designated mechanic to come out and fix that stuff,” Powell says. “That always piqued my interest and usually when somebody would come out, I’d be standing over their shoulder just looking and watching because I was curious.”

With an aptitude for engine work, Ethan became more and more interested in diesels and purchased his first diesel truck, a 6.0L Powerstroke.

“When it broke down, which was bound to happen, I learned how to fix it,” Powell says. “I ended up going to UTI and then ended up working at a dealership. I worked at a Ford dealership and for Mercedes-Benz as well. It was a truck shop, so we did all the vans, the sprinters, that kind of stuff.

“During that time, I was also doing work on the side and I was fortunate enough to make some great relationships over the years from the diesel truck industry, going to truck shows, car meets and that kind of stuff. I made some connections there and offered some services on the side to do some minor repairs.”

“When I first started, I was just doing service calls because I didn’t have a physical location,” he says. “I was looking at building something and renting and all that, so I ended up going out to construction sites and I was very fortunate to have some big contracts with some construction companies to work on their heavy equipment. I did end up getting a shop and now I do Powerstroke, Duramax and Cummins work – everything from head work and total rebuilds to simple maintenance.

While Freedom Diesel Performance can do a lot of things in-house, machine work is something that gets sent out. Powell utilizes Wenger’s Machine Shop in Myerstown, PA. “I have a great relationship with them and they’ve always done right by me and my customers,” he says.

Right now, Freedom Diesel is just Ethan running a one-man shop, but he says he honestly prefers it that way, for now.

“I have had a few guys help at the shop, but ultimately at the end of the day, I’m the best quality control there is,” he says. “I kind of like being a one-man operation. As the business grows, I will have to look for more help in the future, but as of now, it’s just me.”

When it’s just you in the shop, you keep busy, whether that’s with customer builds or projects for yourself. Ethan told us he is currently nearing completion on a 24-valve 5.9L Cummins build he plans to put into a 1960 Cadillac Coupe de Ville.

“Originally, this engine came out of a 1998 Dodge 2500 SLT,” Powell says. “It was beat to hell. It had 120,000 miles, but I made the decision to buy the truck. I actually bought the truck running and driving. I daily drove it for a little bit to see if it was a good candidate. After I put some miles on it, I pulled the engine, disassembled it and sent everything to Wenger’s Machine Shop.”

Powell says Wenger’s did a cylinder hone to freshen up the cylinder walls in the block. They decked the head and fire ringed it, and the machine shop put in 625 ARP studs.

With the 5.9L Cummins back at Freedom Diesel Performance, Ethan got the crank polished, he opted for Mahle pistons, rods and Clevite bearings, and has a few other choices still to make in order to finish out the build.

“I used OEM parts if they were available,” Powell says. “Since this is one of my personal builds, I know this is just going to be a fun, take it to car shows on a weekend kind of car and just cruise around. I’m not looking to make stupid horsepower. It’s still got the VP44. It’s not P pumped yet. I will end up putting a P pump on it – a P7100 – but I want to get it in the car and get it tested first. I’m using 150 hp BD Diesel injectors with the VP44.

“The cylinder head was stripped when it got decked and o-ringed, so we did a new intake exhaust. We did new valve seats, valve guides, new valves, and new springs. I’m planning on using a Garrett HX40 turbo. As of now, the engine has a standard manifold, but I do have a BD three-piece manifold that will go with the HX40 turbo. I might also opt for a BD Screamer turbo, but I’m not sure yet.”

Powell also had to replace the oil pan because the old one was rotted out. In fact, he says due to the engine’s age and condition, every aspect of the motor was touched and nothing was left untouched.

“As it sits now, it’s probably a little over stock horsepower, but it’s not in its final form,” he says. “That will be the P pump, HX40 turbo and three-piece manifold. That horsepower will all depend on how the engine reacts to being paired up with these parts. It’ll be a show car, like I mentioned, but I still want to have some fun in it. I’d be happy with 350-400 horsepower. I feel at that point it’s still a good street car you can have fun with without getting too crazy.”

In terms of installing the 5.9L Cummins in the Cadillac Coupe de Ville, Powell says that wasn’t too much of an issue because the Cadillac is huge.

“It’s a boat, so the fitment is actually pretty easy,” he says. “We had to notch the oil pan just a little bit, but other than that, it sat pretty well. We had to scoot it a little bit forward and we had to shorten up the fan on it. Transmission-wise, I’m leaning towards an Allison, but I’ve got to get a bell housing conversion kit for it. I’ll have to see how that fits in there. We might have to tunnel out where the transmission sits a bit. Other than that, the gas tank is converted and lines have already been run for fuel, so not much else has to be done.”

According to Ethan, the 1960 Cadillac still has its factory gauges and the old factory horn, which only adds to the cool factor. He also says it will likely take six more months to get everything done and have the car rolling.

“It all depends on my motivation and the amount of customer builds I have,” he says. “But it’s going to look pretty.”