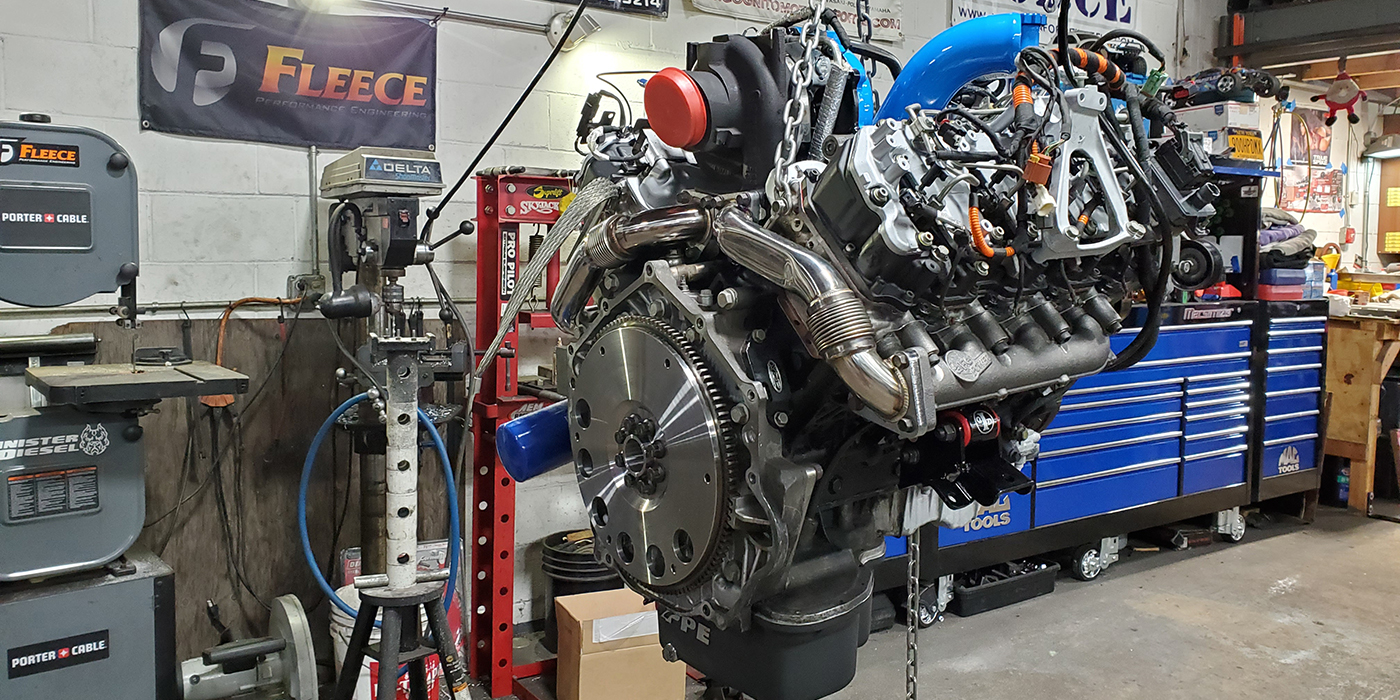 One of the more memorable diesel builds Richie’s Diesel Performance has done of late is this 2015 LML 6.6L Duramax engine for a customer’s GMC Denali. Featuring a playboy blue paint color, find out what else makes it a cool build.

Rich Strube first gained an interest in engine work when he was just 19, tinkering with small block and big block Chevys, as those engines were a dime a dozen. It wasn’t until he took a job at an International dealership in the early 2000s that he fell in love with diesels.

“I got turned onto the Duramax especially,” Strube says. “The Duramax was a GM product and it resembled the small block and big block Chevrolets of the past. Duramax are most definitely my favorite platform. There’s a line of GM roots driving that decision, but it was also one of the most infrequently used engines because of the complexity behind the design. A lot of technicians were not so apt to work on the Duramax over a Cummins or the earlier Powerstrokes.

“When the common rail hit the market, it was a very different technology. Everybody wanted to stick with the mechanicals because it was a lot easier to progress with power. The common rails required much more electronic tuning and a complete different approach with a much different foundation.”

Strube’s desire to focus on Duramax engines led him to open Richie’s Truck & Auto in 2002. The shop was literally in his backyard, but he wouldn’t have to stay there for long.

“We used to do a little bit of everything – trucks and cars – because diesels weren’t always as big as they are now,” Strube says. “That evolved into Richie’s Diesel Performance.”

Richie’s Diesel Performance is Strube’s 5,000 sq.-ft. shop in Hicksville, NY, which will work on multiple diesel engine platforms, but the Duramax remains king.

Richie’s Diesel Performance is located outside Manhattan in Western Long Island where there are a number of shops around, but Strube has a monopoly on the diesel performance work.

“I would say 90% of my clientele is here for performance reasons,” he says. “There are a lot of shops around here, but really no diesel performance shops, so maintenance is something that you can pretty much go anywhere for. I don’t turn the maintenance away, but we’re not really equipped to handle large volumes of maintenance. I handle 80% to 85% of the workload that goes on here and I enjoy it.”

Strube’s shop also doesn’t do much machine work in-house, instead its focus is on assembly and disassembly of the engines that come in. The machine work is sent out to a number of shops better equipped to handle it.

“We use companies that specialize in machine work like Freedom Racing, NGM Diesel, Wagler, SoCal Diesel – those guys are phenomenal at what they do and I put my trust in them,” Strube says. “As far as our shop goes, the way we differ is we specialize in a lot of unique fabricated components for these Duramax engines. I’ll do little things like fuel fittings, special block off components and other things that don’t exist elsewhere.”

With a background in engineering and years of diesel training under him, Strube makes sure he applies what he’s learned over the years to his engine work. One such example is a build Rich just recently finished for a customer with a 2015 GMC Denali and a LML Duramax engine. The customer was looking to increase the performance of his daily driver, but also have some fun at the track.

“I’ve done a ton of LMLs in the last few months, but this was a cool blue one that we just finished putting together,” Strube says. “We did a generic resurfacing of the block down to a 600 grit just to make sure everything is perfect twice over. It’s all juiced out, so it’s all clean and there’s no risk of contaminants. From the deck down it’s OEM GM. It uses the stock rods and pistons. We did stud the engine and we took the heads off and ported the heads.”

“The rocker arms are still stock right now,” he says. “He was going to do the Manton set up, but I kind of cut him off there. It would have been a little bit crazy for a street engine. We’re also working on a water injection system for it currently. I had a local shop fab up a stainless-steel reservoir tank for it. We also had HSP redo one of the boost pipes for it with five NTP ports in it, so we can put a plethora of different water nozzles in it.”

Strube admits this isn’t an Earth-shattering build, but with expectations of 650 horsepower, this LML will be a nice, clean package for a customer who will likely upgrade it down the road.

“He knows he’s going to blow it up eventually and he’s waiting to do so,” Strube says. “The customer is looking for something fun on the strip and the street. The water injection stuff still has to go in the truck. We were hoping to have it done by Rudy’s, but that’s not going to happen now since we don’t have the water system in.

“I told him once he puts the bigger injectors in that thing, he’s playing Russian roulette with that bottom end. It is an LML and I’m a little reserved about trying to make serious power on that stock crankshaft.”

Helping keep things running as smoothly as possible is a few quarts of AMSOIL pumping through this engine.

“I use AMSOIL 100%. I’m a firm believer in AMSOIL,” Strube says. “AMSOIL has supported us for over 20 years, and I have a full stock of AMSOIL here on a shelf that’s got to be 40-feet long.”

What does provide a bit of extra flair to this LML build is the customer’s decision to deck out the engine bay in a flashy blue color.

“The engine is going in a GMC Denali and the customer went crazy on color matching everything,” he says. “The whole entire engine bay is painted in a color called Playboy blue. Despite nothing real crazy about this build, it’s one of the more memorable recent ones I’ve done.”