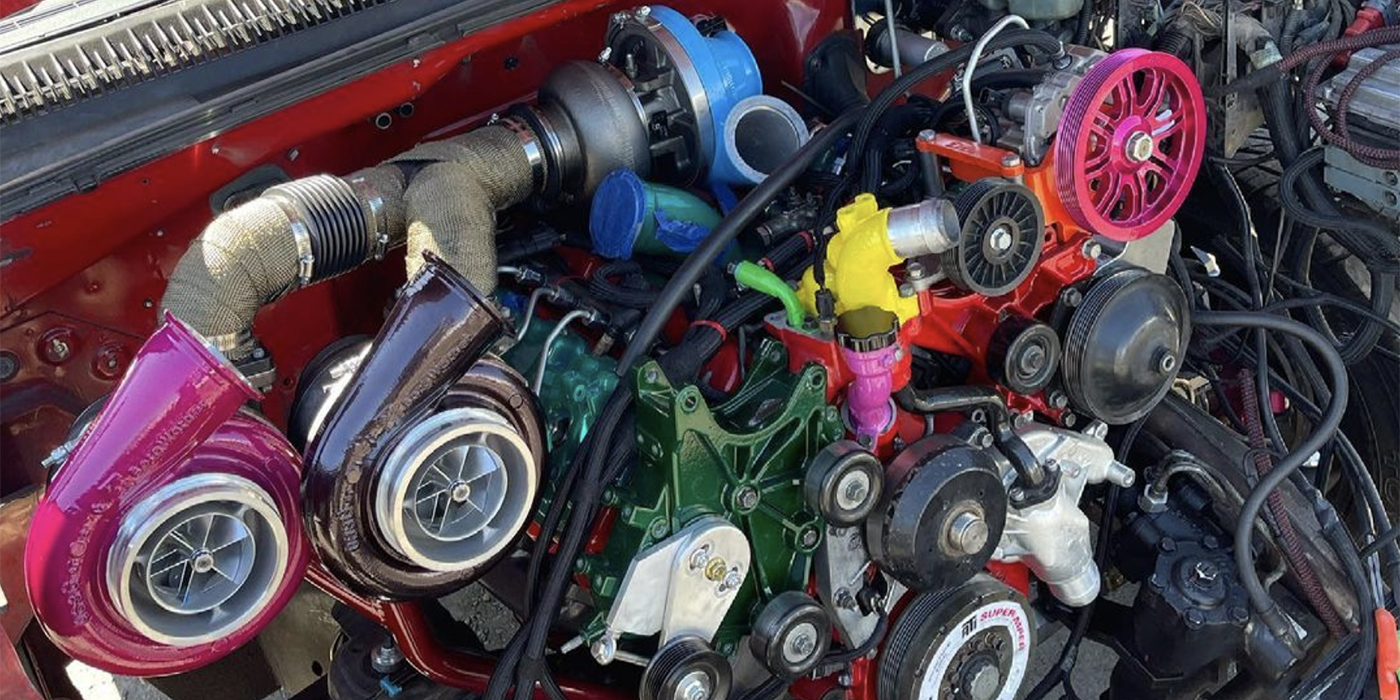 Until you yourself build an engine to compete in some of the hardest competitions, it’s hard to appreciate the blood, the sweat, the tears, the sleepless nights, and the insane amount of money that goes into accomplishing it. For Jacob Riordan, his triple turbo LB7 Duramax-powered 2002 Silverado literally represents his house, his savings account – his everything. When he couldn’t attend UCC 2021, he was crushed, but he’s not letting that stop him. Find out what went into his Duramax build known as the Crayola Box.

When you’re pushing the limits of an engine to absolute extremes, sometimes things don’t always go your way. Jacob Riordan can certainly attest to that as he was attempting to finish his triple turbo LB7 Duramax engine in time to make the 2021 Ultimate Callout Challenge, but kept running into limitations of the transmission, and even his own personal health. Not to mention, building a do-it-all, high-horsepower diesel truck gets very expense – especially when you have to rebuild the truck several times.

“You would think six months is plenty of time for a build,” Jacob Riodan says. “However, I’ve never had this many issues in my life trying to put a truck together – ever.”

Jacob has a 2002 Chevy Silverado crew cab short bed truck with an LB7 Duramax engine under the hood. At some point during the build and testing, the truck sucked up a rag, which caused a rash of issues.

“We got the truck together after having all these issues with it sucking up a rag,” he says. “I don’t know how it got in there, but when you’re thrashing and you don’t sleep and you’ve got too many hands in the cookie jar, this is what happens. That cost me $3,000 and it could’ve been way worse.

“That was basically a good chunk of the UCC money and then we grenaded the trans, which only had about a season on it. We put the spare in, which was brand new with zero miles. The thing hadn’t even seen fluid yet. I got two OK test hits out of it, just making sure it’s shifting right and walking up with 40-50 lbs. of boost. I wasn’t going crazy, but I was getting into it.

“I happened to be at my buddy’s shop, which is a perfect spot to make test hits. We were doing some data logging and I had the pedal down. We were battling tire spin and other variables of a trans getting broken in. It then let go at 6,600 rpm and it sheered all six converter bolts. It was so heartbreaking because if that trans didn’t work, there was no way I was going to be able to go [to UCC].”

To make matters worse, aside from all the issues Riodan’s truck was having, he himself was beyond burned out from a month’s worth of 18-hour days, seven days a week.

“I finally had to take some weekends off, but it was already too late,” Riodan says. “I ended up getting an infection in my throat, which doctors were telling me could swell up and kill me while I’m asleep. That started when I was still trying to get the truck going. I knew I was getting sick and I really should’ve gone in sooner, but that’s how hard we thrash. That’s how important it was for me to show up at UCC.

“People were telling me your health is more important. I was telling them my truck is the most important thing to me. No one knows what that truck means to me. However, if I’m going to die in my sleep over it – it’s not worth it.”

As you can probably determine by now, and if you attended UCC, you know Jacob and his triple turbo LB7 Duramax Silverado ended up staying home. Jacob and his team were unable to get the truck dialed in soon enough to make the trip to Indianapolis for UCC 2021. However, Jacob got some much needed rest, and he plans to get the truck, affectionately named Crayola Box, back into competition this summer. We caught up with him right after he made the call to bail on UCC.

Jacob lives in Dalton Gardens, ID, just outside Coeur d’Alene and about 100 miles south of the Canadian border. He got into diesels once he needed to start towing things, but he always had a knack for making things go faster and work better.

“It all started as a kid,” he says. “We would find ways to make things go faster. Then, you start driving cars in high school and we’d be in the garage trying to tweak things and make it better. I broke a lot of stuff trying to do that, but the more valuable stuff that I broke, the more valuable lesson I learned.

To afford his diesel habit and racing efforts, Jacob runs Speed Stop Inc., a diesel facility where he does repair work and rebuilds engines himself. He also sells Subaru Outbacks.

“I live in an area where we get decent snow and cold and ice and people buy these cars because they’re safe and affordable,” he says. “I’ll drive all over to go pick these things up. I’ve got a three-car trailer. That’s mostly what my business has been. I’ve enjoyed the freedom of it. It’s also how I’ve met so many of the people I know now.”

The Speed Stop was a brand he put in place fairly recently to help him go racing more often and do the kind of work he really loves – diesel.

“I like putting engines together and I wanted to move more towards that direction,” he says. “It’s about 2,500 square feet of usable space with one lift. I also have a storage garage that’s 1,000 square feet, plus some office space. I have worked on some Cummins and Powerstroke stuff, but I haven’t done a whole bunch of them, so the Duramax stuff is really more my specialty.”

Riordan started his race truck build in December 2020 with his 2002 Silverado. He bought another truck to rob the bottom end out of it and then parted out the rest.

“This was our first time trying to make UCC,” Riordan says. “The setup that’s in the truck now is an insane build, and I don’t know how much of an animal it’s going to be. The truck is basically fully gutted with a cage and a single seat. It’s got a six-point harness too, so I’ve got all of that stuff squared away in there.

“It’s got a five-speed Allison transmission. The engine has the stock crank that has an insane balance job done on it. We’ve got a couple custom tricks done with the mains. It has a girdle, Carrillo rods, Mahle forged pistons, ported cylinder heads, a clamshell intake, and Manton valvetrain components such as springs, pushrods, bridges, chromoly shafts, etc.

“This engine came out of a running truck, but I just robbed the long block out of it and put all my own tweaks and twists to it. We went back through it and half-filled the block and o-ringed the block. Danny Baird of Baird Racing Engines down in Idaho Falls did the machine work and everything got assembled at my shop.”

For fuel, Riordan says he has “ginormous” injectors in the Duramax from Flux Diesel Injection, as well as two 12mm pumps and two AirDog 200 lift pumps feeding each pump.

“The injectors from Flux started as 460s, and when the truck sucked the rag, they wanted us to send them back just to make sure everything was good,” Riordan says. “They wanted to make them even bigger, so now they’re massive injectors. We have two 12mm pumps feeding them, but I’m going to have to put a 14mm on it. It’s going to need it.”

The triple turbo set up comes from PMT (Performance Machining & Turbo), which is part of Danville Performance.

“We have an 8093 in the valley and we have two 78mm turbos for the atmospherics,” he says. “Those things push some serious air.”

What has cost Riordan the most headaches and sleep deprivation during the build are the two fully built Allisons from Interstate Diesel Performance down in Clearfield, Utah. To be fair, these weren’t poorly built transmissions, something with the truck wasn’t gelling right.

“Paul builds a damn good transmission,” Riordan says. “However, my truck is a transmission eater. I think this is probably the fifth, sixth or even seventh trans or converter we’ve had in three years. That’s why I had another trans because I had a feeling this would happen. You break them and you figure out how to make it better.”

Other aspects of the build include a driveline from Slyco in Salt Lake City, UT and either 15w40 or 20w50 oil.

“We’re going to send this thing to the moon,” Riordan says. “We put down almost 1400 horsepower last year. With the parts that we have, the people that we have and the knowledge that we have, I don’t see why we can’t make big numbers. We’re shooting for about 1,800 horsepower on fuel. It’s a great starting point and we can improve from there. Do I think the truck is capable of way more? Absolutely. I’ve got two 400 shots worth of nitrous. I don’t know how far we’ll go, but I would like to get another engine put together and start testing and seeing what the limits are.”

While the triple turbo LB7 is capable of some serious horsepower, it also looks pretty killer installed in the truck. It doesn’t take more than a glance to see why Jacob calls his truck the Crayola Box.

“A buddy of mine ended up naming it the Crayola Box. My other buddy agreed and said if I was going to make my Instagram all about my truck, I had to change my handle and make it something different. That’s how it all came about. A lot of people hated on it in the beginning. A lot of people thought it would look pieced together. I didn’t care what it looked like. It’s my truck and I’m paying for it. I’m making it whatever I want. Now, people dig the truck.

“When people tell you they love the truck, it makes you feel good. The blood, the sweat, the tears, the sleepless nights, the insane amount of money. That truck is literally my house, my savings account, my everything. When someone’s like, ‘Oh dude, that’s bitchin!’ There’s a small part of you that knows that’s not why you do it, but when times are tough, those are the things that you remember.”

Jacob vows he won’t be out for long and Crayola Box will be in competition again soon, possibly this summer.

“As much as it sucks that we missed UCC, we’ve worked a little too hard to just throw in the towel on the whole season,” he says. “We’ve got some ground to make up and we’ve got a point to prove for sure. We’ve got to come out swinging at some point, so I guess better late than never. The biggest goal is to put down a big number on the dyno and let’s see how fast we can make this thing go.”