We like to think that inside a modern engine, for all the violent explosions and metal-straining power, a whole world of harmony can be found. Parts work together to produce the most power possible, races are won and trophies are captured.

Of course, this “cooperation” is a little deceptive. While there are dozens of parts that go into the building of any motor, and every part must work with every other part, some components inherently have a more important role than others. In essence, some parts are a little more equal than others.

The crankshaft is one of those parts. Everything that happens in an engine starts with the “crank.” It is the foundation or backbone of the engine.

All of the force generated from the explosion of the air/fuel mixture in the combustion chamber creates a force through the piston and rod, onto the journal of the crankshaft. The crankshaft turns this linear motion of the rods and pistons into rotary motion that propels the vehicle.

As you can imagine, the rod and piston are trying to shove the crank right out the bottom of the motor, so obviously, strength is a prime characteristic of a crankshaft. There are currently three types of manufacturing techniques used to make crankshafts – casting, forging and machining from solid billet. The type of crank that you use is directly dependent on the expected use of the part.

On the strength scale, cast iron crankshafts will fall the lowest. Manufacturing a cast crankshaft is simply a matter of pouring a molten metal into a mold. This has been the method OEMs have preferred for crankshaft manufacturing for many years. While I could quote you all kinds of numbers I will just mention a few. Most of you are engine builders, not metallurgists, and hey, even I don’t understand all the numbers! We’re just looking for results, right? And a lot of those results can be tied to strength.

Crankshafts will actually flex and bend, so greater elongation properties will give the nodular iron crank increased fatigue resistance.

Cast steel is also used and can increase tensile strength to around 105,000 psi. Cast steel has greater carbon content than nodular iron so it has even better elongation characteristics. Many companies offer cast steel crankshafts as entry-level performance pieces. These cranks are great when used in the right application.

Some engine builders believe that a cast crank is fine for a performance street motor but should never be used in a racing application. In fact, that’s really not true: the rules may dictate that you use an OE crankshaft. And in the majority of cases, that means a cast crank. A cast crank is perfectly suitable in the right applications. A general rule of thumb for cast cranks would be a horsepower range of 300-500 depending on the type of casting.

Keep in mind that there are many factors involved in selecting the right crank and you need to rely on experience to guide you. So you can’t just use the crank that came out of that junkyard motor that you are building up into a race motor. The crank will need to be prepped before it can be used, and that means magnetic particle inspection in addition to numerous machining operations. Many times (read most), it will be cheaper to purchase an aftermarket crankshaft. Many performance part suppliers carry a complete line of them.

Forged steel crankshafts are the most popular choice for performance engines. These are strong and durable and can handle horsepower from a few hundred to 1,500-plus hp. Forged crankshafts come in a variety of materials starting with 1045 or 1053, commonly used by the OEs for their forged cranks. These crankshafts have a tensile strength of about 110,000 psi, which is not much more than a cast steel crank. However, they have an elongation of 22 percent, much higher than the 6 percent of the cast steel.

There are arguments on both sides as to whether a forged or billet crank is better (ask ten experts and you will get ten answers). We are not going jump into the fray here, but we will talk a little about the pros and cons of each.

One of the traditionally weak points in a crankshaft is where the rod journal meets the web. The force exerted on the rod journal by the rod causes the web on either side of the journal to flex in and out. In a forged crank, the grain of the steel is flowed and condensed making it stronger and tougher. By design, the flow can be made to follow around these stress points, packing the grain tighter, giving these areas greater strength and fatigue resistance.

In a CNC’d billet crank, the grain of the metal will run parallel to the centerline of the crankshaft. If the grain converges at a stress point there is a greater possibility for a crack to develop. However, it is much easier to get special alloys in a billet material, giving the opportunity to manufacture a stronger, tougher crankshaft.

Another advantage to a billet crank is that you can create it to virtually any design specification. With a forged crankshaft you are limited to the tooling and die available. To introduce a new design in a forged crank you would need to develop new tooling and dies, an expensive proposition. With a billet crank, it’s just a matter of changing the CNC programming. If you are doing a lot of R&D work with the crankshaft, such as moving journals around, trying different overlaps and strokes, etc., billet would be the best way to go.

Again, there are pros and cons to forged and billet crankshafts and there are arguments on both sides. For the average racer, a forged crank will provide good service; you don’t need to go to the expense of billet.

It should be noted that at the top echelons of racing such as drag racing’s Top Fuel and Top Alcohol classes, and NASCAR Sprint Cup, most teams are utilizing billet crankshafts. However, I think this has more to do with the flexibility to easily customize and create one-off pieces than other factors. Keep in mind that these teams can afford the additional expense and they have the engineers and technicians who spend thousands of hours in R&D looking for the design that will give them an edge over the competition.

The quality of any particular crankshaft is also related to the quality of the metal being used. But remember that all 4340 steel, for instance, is not the same. The percentages and mixtures used are proprietary to the top manufacturers and they constantly test the steel they use in manufacturing their crankshafts. It isn’t uncommon for a batch of steel to come in that is not within specifications. Buying from the top manufacturers will assure you of getting a quality part.

The American Society for Metals oversees the grading of metals, and for 4340 a range of different elements is allowed with the chemical data as follows:

The difference in quality among the top manufacturers is insignificant. Your choice will more likely depend on other factors, such as design, availability and customer service. As with any other part of your business, you will build a rapport with your supplier that works for you. Your supplier will be invaluable to you in the selection of the proper part for the application and can also assist you in creating your own proprietary designs if that is your cup of tea.

Crankshaft selection depends on many factors including rules, horsepower, rpm range, and whether the engine is naturally aspirated, turbo-charged, or supercharged. Supercharging, and to a lesser extent, turbocharging put a tremendous amount of stress on the bottom end of the engine. Again, your supplier can be a great help in the selection process.

Crankshafts are so good today, that if you choose the proper one for your application, it’s very unlikely that one will fail. Unless you used a cast crank in a nitro burning top fuel dragster, most crankshaft failures are actually the result of another problem in the engine. Just because the crank broke, don’t assume it was the crank’s fault: look for other reasons.

As an example, consider this story about a sprint car racer who broke two cranks in two weeks. The cranks broke at the front, which, by the way, is the most common area of breakage for crankshafts. He checked all kinds of things at the front of the engine, but couldn’t find a problem. He was ready to blame the breakage on a couple of bad crankshafts when he discovered the real culprit.

As most of you probably know, a sprint car is direct drive and the drive shaft is bolted directly to the back of the crankshaft. It turned out that the flange that attached the drive shaft to the crank had been machined slightly off-center. This caused a harmonic imbalance to develop at the front of the crank, causing it to fail.

Regardless of how good a fuel system you use, how good a tune-up you put on the engine, how good an ignition system, or for that matter, whether you use the best parts available or not, there is a point in any engine that it becomes unstable. The engine may run great – nice and smooth to a certain rpm – then it’ll run a little rough and you’ll feel that as a vibration. Once the engine passes that point it may smooth out again and be fine.

Some people believe that short tracks are harder on a crankshaft than a superspeedway. Just the opposite is true in many cases. On a short track, an engine may not spend any time at that unstable rpm since you are on and off the throttle more. However, on a big track, the engine may spend more time at the critical rpm. Knowing where that point is can help extend the life of your crankshaft. If the engine spends a lot of its time at that point, failure will be much more likely.

Choosing the proper crankshaft depends on a host of factors, and each of them should be considered. Choosing a crank that is not strong enough for a particular application is as much a waste of money as choosing one that is stronger than needed. 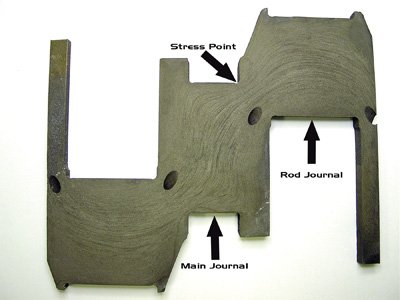 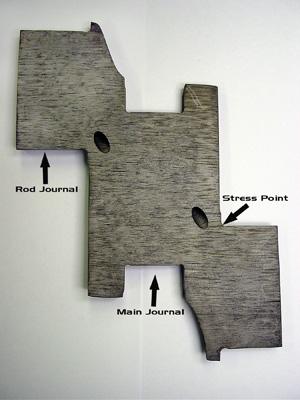