How have the changes in the market and the changes in vehicles affected shops specializing in vintage engines as well as those shops thinking about adding vintage to their list of services?

The automotive enthusiast and collector market is a funny creature. While the actual mechanical evolution may sometimes run in opposite directions, the eras of interest are primarily broken down by time blocks, not by the very products of cars and trucks themselves. Most car people differentiate between Pre-War, Post-War, First Muscle Car and now the Second Muscle Car eras.

The Pre-War Era – up to 1940 – is all about mass production getting up to speed across the many brands of cars, many never to be seen again.

The second era – the biggest as far as evolution goes – is Post War – 1940 to 1960 – and coincides with the growth of America and what was learned from the technology of building for war. The third is the Muscle Car era of the ’60s in which the Baby Boomers came of age and hit the streets. The Second Muscle Car Era – 2009 and up – is once again, the kids of those Baby Boomers, getting their drivers licenses and feeling the influences of their parents’ love for those cars.

This categorization is unique as it is accepted across the board in all genres, from restoration and hot rods, to racecars or trucks. It’s likely no coincidence that those time spans also fit into generations, as well. Typically, as one generation grows up, their offspring grows into the next generation of car and truck lovers.

The first question one must ask should help shops determine the popularity of pre-war engines: What parts are popular and – more importantly – available? “The popular vehicle makes include Flathead Fords and Mopar six-cylinders, as well as just about every other make, including Chevys, Studebakers and Packards,” says Jim Ketchum, pre-war expert at Egge Machine Company. “Enthusiasts enjoy a pretty good combination of all those cars.”

Ketchum says the pre-war vehicle market – though not necessarily to the extent of some of the other periods – offers a good combination of opportunities. “A lot depends on its brand. Studebakers and Packards tend to be restored, while a guy with a Chevy might just be trying to get it running.”

Egge’s Tony Colombini says keeping those vehicles running often means rethinking that technology with today’s products. “Our big sellers in Pre-War engine building products are mainly cast aluminum pistons and stainless steel valves we manufacture. Egge cast aluminum pistons are a good replacement for the older style cast iron pistons and our stainless valves are designed for unleaded fuel, unlike the original equipment in automobiles from this era.”

Packard Industries’ Bob Rovegno says “Our Rebuilder’s Choice engine kits for the popular GM, Ford, and Mopar Pre-War engines are still selling well. We have reproduced and continue to sell a large quantity of timing chains, gears and sprockets for Pre War engines. We also reproduced the popular six- and eight-cylinder pistons, as well as main and rod bearings for Buicks, Chevys, Cadillacs, Packards and Pontiacs. Since alternate sources for these and most other Pre-War engine parts are drying up, we have continued to invest in reproducing as many of the popular engine parts as is economically feasible.”

Ketchum says that while it’s often surprising to some people that parts for these cars are still available, it’s sometimes more surprising when they aren’t. “There was only so much of it to begin with and as people use it up there’s less and less. A lot of the parts are available from companies that specialize in certain marques or even as New Old Stock (NOS) for some engines. But I’ve had a customer call surprised that we didn’t have a .015?-over piston set for a 1920s Locomobile in stock, ready to ship.”

Although the automobile industry had grown out of its infancy by the 1920s and ’30s, most manufacturers had their own unique way of designing and producing their own motors. This lack of consistency in parts design means simple parts substitution can be a challenge, says Rovegno.

“Ford V8s had two connecting rods that shared one rod bearing. The bearing spins both in the rod and on the crank, so clearances have to be checked both on the ID and the OD. Hudson made its blocks out of chrome alloy steel that was so hard they did not use valve seats. Many good shops have discovered that you will use up both time and material when boring and honing these blocks.”

According to vintage engine expert, and Engine Builder contributor, Doc Frohmader, the changes to vehicles over the years means understanding the older engines can be more difficult than ever; but don’t blame the engine. “Gaskets and seals have changed and so have the techniques for installing them. I am surprised to find that builders don’t know how to install rope rear main seals and then blame the engine or blame the seal. Or they fail to determine that there is a lip seal conversion for a given vintage engine. Or they blame the gaskets when a collapsed valve cover or pan rail is warped up enough so no gasket will seal and the engine leaks. Or use gaskets made 30 years ago that are out-of date-technology and dried up to boot. Worse yet, we still have those who insist that a vintage engine will just leak because it was designed that way and completely ignore modern ways to correct old ills.”

Colombini continues: “Engine builders need to know that these engines can be a little more tedious to work on. Dealing with babbitted rod and main bearings, shims, fiber timing gears, split valve guides, accessory chains that drive water pumps, generators and mechanical lifters can seem overwhelming at first if you’re used to modern technology. Many pre-war engines have babbitted rods and thick-shelled main bearings which can be damaged when using Plastigage because the babbit is so soft.”

Rovegno says that knowing what you don’t know is vital in this market. “There are so many idiosyncrasies in rebuilding pre-war engines that I would say the most important ‘tool’ you need is knowledge. Find out everything you can about the engine before you start the job and you will avoid unpleasant surprises.”

We’ve heard it said that today’s machining equipment doesn’t know nor care whether you’re working on a late model engine or an antique diesel. What about yesterday’s equipment? Colombini says certain engines need certain tools. “Engines like flathead Ford V8s need an adjustable lifter tool to hold the lifter stationary while the adjusting screw is turned. However, most tools and machinery that machine shops and engine builders already have would take care of most of the procedures necessary to do a pre-war engine rebuild such as a milling machine, cam grinder and crank grinder.

Rovegno says, “Although most pre-war engines had unique tools supplied by the manufacturer to assist in engine rebuilding, most of these are no longer available. But due to the simplicity of the motors most shop tools used today can still be used on these early engines. It usually takes a little bit of ingenuity to modify a shop tool from today to be used on an engine from years ago.”

How do experts see this industry today? “We are talking about engines 70 years old and older,” Rovegno reminds us. “So I would definitely say that the market is shrinking. However, we have not experienced a significant decline in sales yet. This is because we have reproduced so many of these Pre War engine parts and so many other sources for these parts have dried up that we have a constant flow of new customers.”

Ketchum agrees. “The problem with the older vehicles isn’t that guys can’t afford the parts: it’s that parts just aren’t available. We can repour bearings, we can make valves, we can make pistons. There are companies that make gaskets and timing components. Sometimes we can convert rods from babbitt to a more modern bearing insert. We can usually find a creative option to keep these cars on the road.”

What you CAN’T do, however, is be frugal. “There’s no way to say ‘yeah I want to build this engine but I want to build it cheap.’ That word doesn’t fit in this market,” Ketchum says.

Colombini says demand is often inversely linked to the original production numbers, “Some pre-war engines will have a higher demand for parts if more vehicles were produced. Others may have a lower demand if less of them exist to be restored.”

Customers, it seems, are aware of the price of their prizes, says Ketchum, often more so than in other vintage markets. “It’s more of a veteran-enthusiast group,” he explains. “A lot of them understand what they’re getting into with pre-war vehicles. They know it’s not going to be cheap. Post-war people sometimes have trouble accepting the costs.”

He says he’ll often get questions from enthusiasts who are considering rebuilding their Marmon, LaSalle or Hupmobile but want to know about parts first. “They’re not concerned about how much it will cost – they just want to be sure they can get parts before they commit to the project.”

How do our sources see the market for these builds in the future? Rovegno says “The market for Pre War engine parts will continue to shrink. There are only so many pre-war cars and trucks scattered throughout the country that will eventually be restored. Many of these vehicles will be turned into street rods with modern drive trains installed. The vehicles already restored are seldom driven, so you can’t count on return service work. However, the profit potential is considerable if you get one of these pre-war engines in your shop. And many car collectors have more than one vehicle in their collection, so if you make your customer happy it can mean more profit for you in the future.”

Colombini sees a natural transition in, but not an elimination of, vintage interest. “The pre-war market in the future will be shrinking. Sales of these pre-war components have decreased in recent years but based on the response of our customers and the parts that they request from us, demand for post-war vehicles in the collector marketplace has seemed to grow.”

Another segment to consider is the ever expanding traditional or rat rod culture. Their theme is using parts available in 1962 and older, including those from the junkyards of 1962 where most hot rodders got their parts. In this car culture, even the most obscure motor is acceptable, so resurrecting tired motors is the norm.

Rat rods cross into the post-war period, as well, and as far as enthusiasts go, it’s the fastest growing market out there today. Builders need to know what speed goodies from the era will work and, just as importantly, be period correct.

The market for pre-war engine work is there, currently strong, but with a shelf life that will eventually run out. Is it for you? 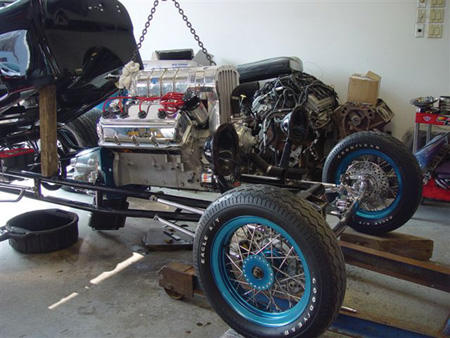