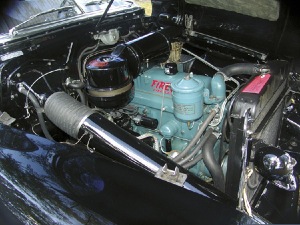 “The popularity of the post-war engines being rebuilt is not much different than the pre-war models,” says Packard Industries’ Bob Rovegno. “GM rules the roost, with Cadillac, Oldsmobile, Buick leading the way, and surprisingly, Lincoln-based 383s, 410s, 430s, 462s are next and the old Mopar or Ford flathead V8s are up there in the top five.”

Evolution wasn’t a theory, it was a fact. Cars became bigger, better, flashier and old ones obsolete sooner. As the cars became bigger, they needed bigger engines. America’s love of speed became evident and the birth of two new sports – drag racing and stock car racing – sent engine development on a straight-up climb. How fast? In 1949, when NASCAR was formed, the average car had less than 200 cubic inches. It took less than 10 years of new engine design to double that size.

Today, these late ’40s to early ’60s cars are prized by the generation of Baby Boomers that was brought up in and around them. These engines are not going away, a fact borne out by the large number of reproduction parts available. An enthusiast can often build a post-war engine without searching out original parts. Many times, a computer and a credit card is all that’s needed.

But despite our familiarity with these aging veterans, keeping them in prime condition still takes expertise. Shops specializing in vintage engines – as well as those shops thinking about adding vintage to their list of services – have to stay on top of this information. Luckily, expert advice, while necessary, is still easy to find.

Although the enthusiast publication industry has fallen on hard times of late, with many celebrated and respected magazine titles on the auction block or simply turned into scrap, engine building resources still exist. Engine Builder magazine, for one, continues toprovide commentary from experts in the industry. Doc Frohmader, “Old Iron” columnist, runs webrodder.com, an online technical magazine that offers articles and forum discussions on hot rods and classic engines. A wide array of associations and enthusiast groups are available to give guidance on engines and applications.

“The audience for post-war classics pretty well covers all ages but with different intentions,” explains veteran journalist Bill Holder. “For some, these cars and trucks present excellent candidates for complete stock restoration. But as a rule, these restorations are accomplished by those who were around during the period and are now in their ’70s and ’80s for the most part. These folks recognize these machines as classics and try not to make any changes to them.” 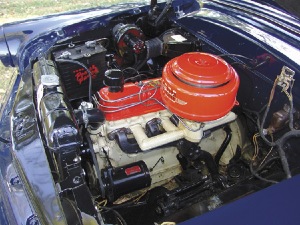 Post War cars aren’t just for cruising to local burger and ice cream joints on weekends. There are hundreds of judged car shows across the nation to attend. The world’s biggest club for such vehicles and shows is the Antique Automobile Club of America (AACA). With over 60,000 members, AACA members are dedicated to the preservation and restoration of automobiles, trucks and motorcycles. AACA maintains one of the world’s foremost research centers and founded the AACA Museum in Hershey, PA, where the club maintains its offices.

Steve Moskowitz, president of AACA said, “AACA operates the AACA Library & Research Center which is one of the largest such facilities in the world. It is a free public library. We should approach 1 million pieces of documentation in the coming year and include two full-time librarians with their Master’s degrees among the staff. In addition, our national judges go through continuous judge’s education during the year as we have classes that pertain to particular engines.”

Holder concurs that the engines are critical to many fans of these vehicles. “One thing for certain, is that the original engines in these vehicles are 90 percent of the time running to perfection. At shows, vintage fans flock to the smooth sound of an old Ford Flathead or the like purring away. These guys will do whatever it takes to keep them running to perfection.”

But while they respect the history of the vehicles, not all fans care to keep them looking factory fresh forever. For the younger set, says Holder, both the post-war car and truck models often serve as a basis for considerable modification. Earlier, and still sometimes today, the conversions are manifested as either mild or radical street rods.

“The changes include altered bodies (including chopping and channelling of the body) and often with either upgraded original powerplants (multi-carbs, aftermarket heads, etc.) and other upgrades. During the past decade, the new Resto-Mod technique is being carried through to postwar trucks and cars, and it’s certainly gaining momentum.”

Holder explains the Resto-Mod modifications include retaining the stock vintage body, but usually stripping off some of the chrome detailing for a clean look. But then the remainder of the vehicle is constructed with modern parts and pieces, i.e., powertrain, suspension, interior, brakes, and in some cases an aftermarket tubular frame. The idea behind this concept is the retaining of the vintage outer body look, but increasing engine performance and safety.

Taking things even further, the popularity of “rat rods” continues to grow. Engine work in this arena often calls for cosmetic upgrades as well as a nasty idle, good throttle response and distinctive “crackle” through the exhaust. Virtually any cam with the right amount of overlap will give a mean-sounding idle, but high-overlap cams usually have pretty low manifold vacuum, so make sure the carburetor’s power enrichment circuits are adjusted to these lower manifold vacuums.

“What engine builders need to know about these engines from the Post-War era is that they have internal components that are very specific to the year and make of the application,” explains Egge’s Mandlin. “Always identify an engine that comes into your shop using casting numbers off the block or heads, forging numbers from the crankshaft or connecting rods, bore size, or numbers from the head gaskets.”

Careful identification is critical because of the age of these engines, Packard’s Rovegno agrees. “Engine builders need to check the engine numbers before starting a rebuild. After 65 years, we find that a great deal of engine swaps were done 30 or 40 years ago and the current owner or rebuilder is not even aware of that.” 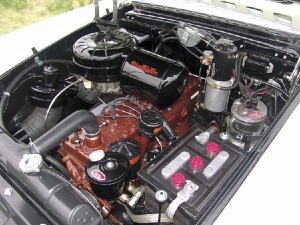 Rovegno says, “We supply the 1957-’58 Oldsmobile V8s with a 6 main bearing set. The number one bearing is different between 1957 and 1958, but this engine has been swapped out so much, that we found it cheaper to supply both number one bearings instead of fielding the customer service calls when the set wouldn’t fit.”

Availability of parts for many post-war engines from many sources may be drying up quickly, but you can still find some of these new old stock (NOS) parts from Egge, Packard or other niche suppliers. Increasingly, new parts are being produced for these classics, with today’s technology being applied to yesterday’s specs.

With so many reproduction products out there, is it easier to replace than to repair parts for these engines? In many cases, Rovegno says, the answer is yes.

“There are many reproduction engine parts being made now, so rebuilding or refinishing components such as rocker arm assemblies or valve lifters is often a waste of time. Also, reproduction parts prices are not exorbitantly high, and they usually come with a warranty,” Rovegno says.

Mandlin provides this caveat, however: “It’s easier to replace parts than repair them if the engine is mass produced. If the engine you have in your shop is a limited edition, low production, one year only kind of application, you may not have the luxury of calling a supplier and getting the specific part you need. In those cases, you would have to regrind the camshaft, crankshaft, recondition connecting rods, or even get valves and pistons custom made. Save all the components you remove from your engine teardown as a reference to compare with the aftermarket pieces to make sure they are accurate and will work for the rebuild.”

Mandlin’s colleague at Egge, Neil Matranga says, “While some people may be trying to only replace a failed OEM piston, we do not recommend this approach. Pistons, rings and bearings should be replaced in sets after the cylinders and crank have been measured for wear and square.”

The need to do the job right is as important with these cars as ever from a durability standpoint – from an accuracy standpoint, it may be even more.

“Since most of the ‘Barn Find’ cars have been found, most vintage engines have been well used over the years,” Matranga says. “This means it is most likely time for a complete rebuild. In our market, most people are restoring, not modifying, their cars due to resale value. They watch the large car auctions to see what a restored car sells for vs. a modified car.” 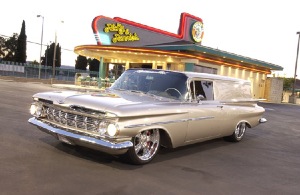 AACA’s Moskowitz says, “Typical ‘mistakes’ found in post-war collector cars and shows usually do not involve the engine itself but the engine compartment. Those people restoring cars for national judging usually get most things right but occasionally will get wiring incorrect and hose clamps incorrect. At times, it can be a challenge as to what is painted and what finish an engine compartment item may have such as brake boosters, master cylinders, etc. Post War engines are relatively easy to document given the wealth of information available. In fact, the level of sophistication in the detailing of engines and engine compartments has reached an amazing level thanks to the competitiveness in classes such as our high performance classes and individual car clubs that have very stringent judging criteria.”

How does the AACA see the collector market for Post-War automobiles? Moskowitz says, “While certain areas seem cyclical, the market seems very strong. If auction prices are a reasonable gauge, the interest among collectors remains high. Post-war classes are the strongest growth segment in our club and we suspect that with the new generations of car hobbyists this will continue to be the case.”

Suppliers agree that interest continues to be strong. “We see significant growth in the Post-War market,” Rovegno says. “The cars are more popular and ‘driveable’ than the pre-war cars and they appreciate in value more quickly. And of course muscle cars from the ’50s and ’60s are among the most valued of all the post-war collector cars.”

But knowing which is most popular is a moving target.  “The market of Post-War engines is continuously changing,” says Mandlin. “One specific type of vehicle can be ‘in demand’ in terms of being sold at collector car auctions and rising blue book value. The engine that came in that vehicle will have a greater need for parts and then may drop off later. Some other vehicles such as GM, Ford, Chrysler cars made in the 1950s and ’60s have maintained significant popularity and require constant demand of engine parts.”

Regardless of what is specifically popular, growth seems to be the future of this marketplace, say experts and enthusiasts alike. Engines are easier to work on and easier to find parts for than the pre-war cars. The mechanical parts may dry up from the major suppliers but there are numerous companies that will fill in the gaps whenever and wherever necessary.