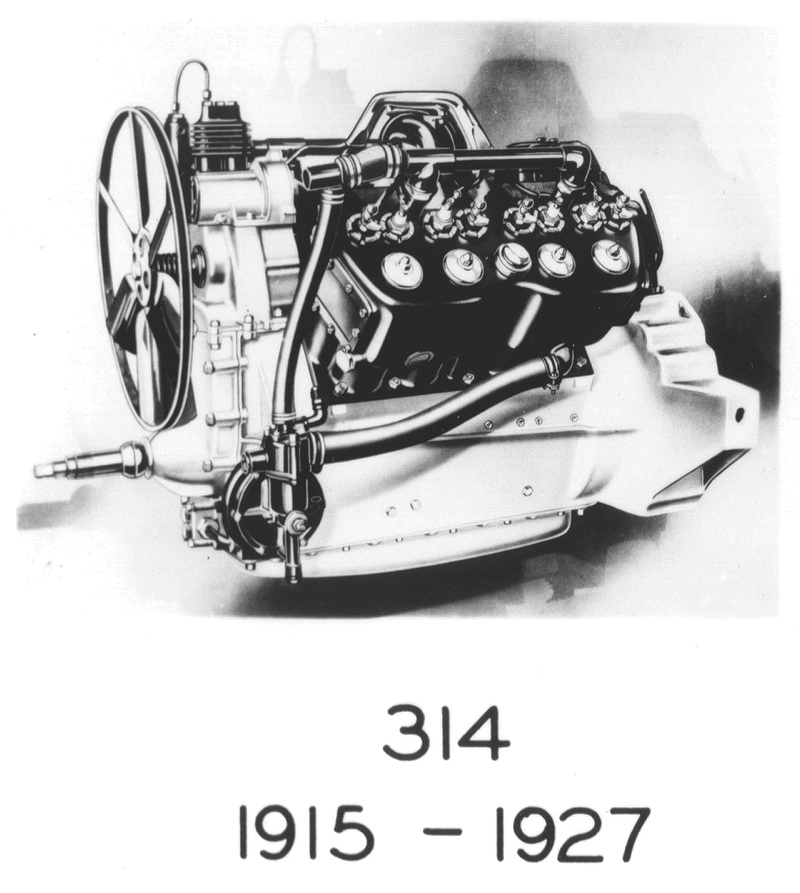 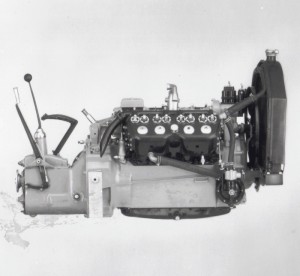 For more than a century, the name Cadillac has been synonymous with performance, style and passion. And in those early years of the Cadillac Automobile Company, it was a former loom mechanic – Henry Martyn Leland – who was credited with forging the technologies that separated Cadillac from the other automobile businesses that were springing up at the turn of the 20th Century.

Leland was born to Quaker parents in Vermont in 1843, and 43 years later in 1890, Leland took his family and his talents to Detroit, MI to seek his fortune in the growing automotive industry.

In June 1901, Olds Motor Works signed a contract for Leland to make Curved Dash Olds engines. Leland designed one that developed 23% more horsepower than an engine developed at that time by the Dodge Brothers — John and Horace. Unfortunately, Olds rejected the Leland designed engine due to retooling costs. A year later, Henry Ford took his design.

In August 1902, two of Ford’s backers called Leland in to appraise the automobile factory so they could sell out. They felt Ford was too involved in building racing cars. Leland showed them the engine that Olds had rejected and suggested they stay in.

The single-cylinder Cadillac would be built for half a dozen years. The first four-cylinder Cadillac arrived in 1905. The Model 30 of 1909 had a refined four that would advertise “1/1000th of an inch is the standard measurement.” 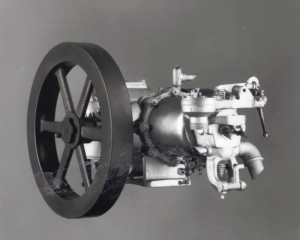 General Motors then bought Cadillac for over $5.5 million. In September 1914, Cadillac introduced the first V8 engine in a series produced, mass-market automobile.

The engine had rockers with roller cam followers, a 1.5 gallon crankcase and a 5.25-gallon cooling system. Its Johnson float feed carburetor had auxiliary air control. The water jackets and combustion chambers were integral with the blocks.

Coolant circulation and temperature control relied on an impeller pump with a thermostat for each block.

Three 1-7/8 in. bearings protected a crankshaft with four throws in one plane. The fork-and-blade connecting rods were a Leland trademark. 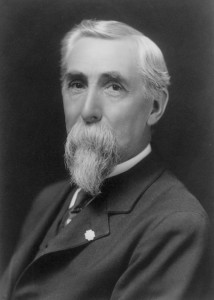 Henry Martyn Leland (February 16, 1843 – March 26, 1932) was a machinist, inventor, engineer and automotive entrepreneur -­ and was instrumental in the founding of both luxury automakers Cadillac and Lincoln.

A single camshaft with eight cams was used. A silent chain drove the camshaft and generator shaft. The generator and distributor were rear mounted since a two-cylinder power tire pump was up front.

The updraft carburetor had a water-heated intake manifold. The dual exhaust system (without balance pipe) had log-type exhaust manifolds.

Cadillac’s firing order was 1L-2R-3L-1R-4L-3R-2L-4R as viewed from the rear and each bank was numbered one through four from the front.

The valve chamber caps were stamped H, L, or LL for high or low compression ratios. A three-point suspension kept the engine smooth for the era.

The mounts were of ball-and-socket design at the front and solid at the rear.

The lubrication system was recirculating and pressure fed from a gear-type oil pump. The pump drew in oil from the crankcase and forced it through a header pipe running inside the crankcase.

Leads ran from this header pipe to the main bearings and then through drilled holes in the crankshaft to the connecting rod bearings. 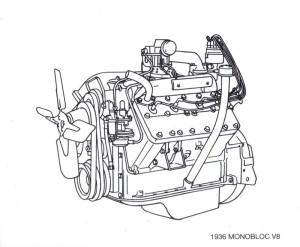 Cadillac 1936 Monobloc V8: In its first year, the Cadillac Monobloc V8 was offered in two displacements, with the larger one being the exclusive Cadillac V8 thru 1949.

The pistons, cylinders and all were lubricated by oil slung up from the lower ends of the connecting rods. Oil from the rear end of the header pipe ran to the pressure relief valve.

Then, the overflow from this valve was gravity fed to the camshaft and chains, before draining to the crankcase.

In 1916, Cadillac offered only one series, the V8-powered Type 53. Erwin G. “Cannonball” Baker and Wm. F. Sturm drove a V8 roadster from Los Angeles to New York in seven days, 11 hours, 52 minutes. They bettered their previous time in another car by three days, 19 hours, 23 minutes.

Continuing refinements of the V8 had brought detachable cylinder heads for 1918, an inherently balanced crankshaft in the V-63 of 1924 and detail changes in the interim 85.5-hp Series 314 V8 that endured until 1936. Then, Cadillac came out with a new Gen III V8 that introduced unit-block construction and downdraft carburetion in a design that would survive until 1949.

The engine had three main bearings, hydraulic valve lifters and a Stromberg EE-25 dual downdraft carburetor. Its crankcase capacity was 7 qts. And the cooling system held 30 qts. of coolant. 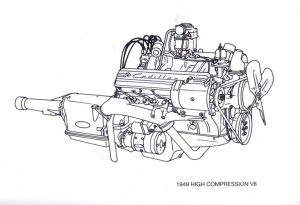 In this engine the water jacket ran the full length of the cylinder bore and a more rigid crankshaft with six counterweights was used.

Cadillac used new connecting rods with the large ends split at an angle. This allowed them to be removed through the top of the engine. Hydraulic valve silencers were used, along with new manifolding and a downdraft carburetor.

Suction-type crankcase ventilation was employed to take fumes out of the engine through the exhaust system. The lubrication system was simplified by restricting piping only to the hydraulic lifters. A combination fuel pump and vacuum pump was mounted on the front engine cover.

The starter was on the right side, in front of the bell housing. The generator could be serviced by removing an access panel under the left front fender. The radiator was pressurized. 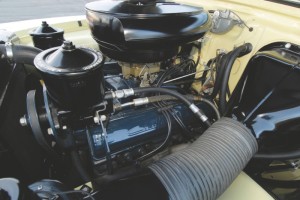 During the late ‘50s a recession moved car buyers towards compact imported cars with fuel-efficient four-cylinder engines. With lead times being what they were then, Detroit reacted slowly to this change and, by the time it had, the pendulum swung back again. At Cadillac, the only engine available in 1961-1963 was the 390 with a single four-barrel carburetor and 325 hp at 4800 rpm. 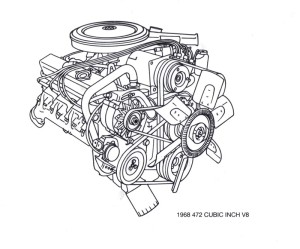 To keep a watchdog government happy, in the ‘70s Cadillac adopted a 8.5:1 compression ratio to permit utilization of low-lead or lead-free gasoline. A high-energy electronic ignition system debuted in 1974, Sales plunged due to an Arab nations’ oil embargo. In mid-1975, Cadillac launched the international-sized Seville with a 350-cid fuel-injected V8, while full-size models got electronic fuel-injection for a 500-cid engine that was the biggest V8 of modern times. In 1977, the full-size models were downsized. All non-Seville Cadillacs carried a new, smaller, 425-cid V8. In 1978, Sevilles could be ordered an Olds diesel V8. The Eldorado was downsized for 1979 and used a 350-cid V8. Big Cadillacs kept the 425-cid V8 and all models could be optioned with the Olds diesel.

A new 1980 Seville had front-wheel drive and a standard diesel engine.

Other Cadillacs turned to a 368-cid gas V8. A fuel-injected version was standard on Eldorados and optional for Sevilles. Late in the year came some shocking power plant news—a Buick-built V6 for Cadillacs.

A different kind of “V8” arriving in 1981 would bring Cadillac nothing but grief. The variable displacement (V-8-6-4) engine seemed like a good idea at the time, but it was trouble and lasted only one year, except in limos. The Buick V6 remained an alternative.

For 1982, Cadillac launched its four-cylinder subcompact the Cimarron. A new aluminum-block 249-cid 4100 V8 replaced the troublesome V-8-6-4 as the standard engine in other models. 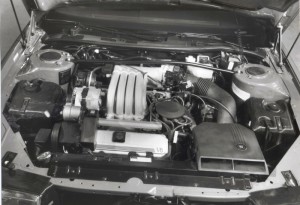 The 1985 deVille and Fleetwood models were two feet shorter and used transverse mounted V6s or V8s. Even Fleetwood limos were front-drives, but the Brougham soldiered on with rear-wheel drive. Brand-new Eldorados and Sevilles arrived for 1986 and limousines finally dropped the V-8-6-4 engine. Rear-drive Fleetwood Broughams kept the 5.0-liter V8.

Cadillac’s introduction of the Allanté in 1987 highlighted what was called the “New Spirit of Cadillac.” The Allanté was based upon the GM-30 platform and utilized a 4.1-liter (249-cid) 170-hp V8.

With the elimination of the Cimarron in 1989, Cadillac returned to its traditional position of offering automobiles powered exclusively by V8 engines.

By this time, Cadillac was marking its 75th year of offering V8s. Among the highlights for 1990 was a 4.5L V8 with a 25-hp increase to 180 for Eldorado, Seville, deVille and Fleetwood models, and an optional 5.7L V8 for the Brougham. The Allante’s 4.5 developed 200 hp. Some Cadillacs built for coachbuilders or for towing used a 5.7L (350-cid) Chevrolet-built V8.

Cadillac observed its 90th Anniversary in 1993 in a big way, introducing the pioneering Northstar engine, with limp-home capability. This was a 4.6L (279-cid) aluminum block and heads, overhead valve V8 with dual overhead cams with a 10.3:1 compression ratio, direct acting hydraulic tappets and a tuned port induction system. 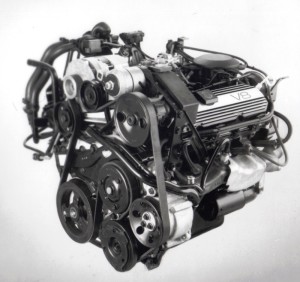 The Northstar engine of 1995, powering all Cadillacs except the Sedan deVille and Fleetwood, helped to mark the 80th Anniversary of the Cadillac V8.

The V6 Catera zipped into the linep in 1996 as a 1997 model. It was the first time Cadillac offered a Cadillac-built engine other than a V8 since 1988. All other Cadillacs used Northstar V8s, which came in 275- and 300-hp versions.

Cadillac’s millennium-ending 2000 lineup featured completely restyled full-size deVille sedans built on a much stiffer platform shared with some other GM marques. Eldorado and Seville remained largely unchanged in appearance, but received tweaks to their Northstar V8s.

The 4.4L Northstar V8 used in Cadillac’s later V-Series were all supercharged. The present STS-V engine produces 469 hp and 439 lbs-ft. The 2006-2008 XLR-V uses the same supercharged Northstar V8 as the STS-V, but in a 443-hp 414 lbs-ft. version with the supercharger and four intercoolers built into the intake to fit under the lower hood. And lest we forget, Cadillac Escalade SUVs were powered by the Chevy-built Vortec 5700 V8, 6.0L Gen III series V8 or Gen IV 6.2L V8. In addition, the CTS-V sports car offered a variety of Corvette V8s including Z06 and ZR1 performance mills with as 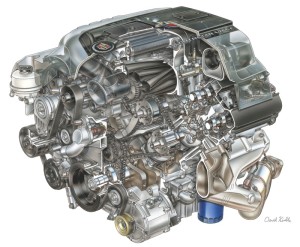 Advertisement
In this article:Cadillac, vintage