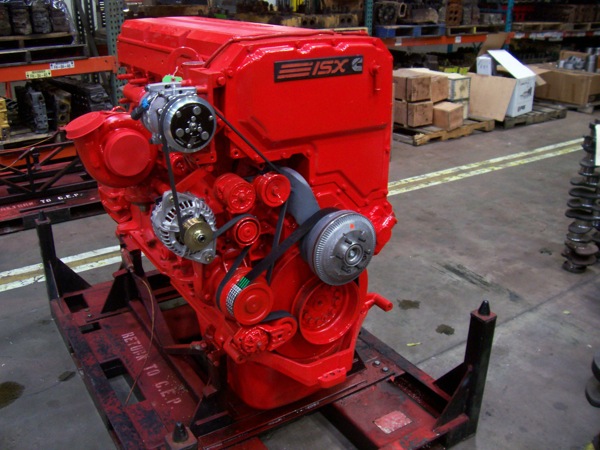 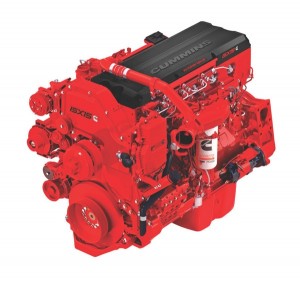 The Cummins ISX engine is one of the workhorses of the Cummins brand and will continue to be a dominating factor in power generation applications, mining and industrial settings.

The first Cummins ISX engine rolled off the production line in 1998.

Until 2010, this engine was a dual overhead cam design with one cam actuating the injectors and the other the valve train.

This Cummins ISX model was also completed one year ahead of production schedule to meet the EPA Department of Transportation Regulations.

The “ISX” in Cummins ISX stands for “Interact System” which is the on-highway fuel system Cummins developed to vastly improve performance. Cummins ISX engines are very popular for on-highway and commercial trucking applications since they have the ability to pull between 430hp – 620hp at 2050 ft./lbs. Consequently, the brother of the Cummins ISX is the Cummins QSX which is part of the “Quantum” series. The Cummins QSX engine is the primary workhorse for off-highway, industrial, marine, heavy equipment and oil & gas applications.

The Cummins QSX delivers between 365hp – 665hp at 1875 ft./lbs. of torque. Capital Reman Exchange has the ability to do both Cummins ISX and Cummins QSX engine rebuilds. 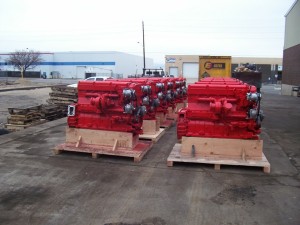 These ISX 15 engines, which were being shipped to a customer in Ecuador, have a power range about 450 hp.

The Cummins 15L ISX is the latest engine in the ISX family which ­debuted in 2013.

With the ISX 15 the fuel efficiency is increased 10 percent + over previous models. The foundation of the ISX 15L is the reduction of the size of the radiator and multiple cooling panels.

This reduction in size of the cooling system without the loss of cooling power mean overall better aerodynamics within the engine. The new Cummins ISX engine cooling system allows for losses from the engine’s alternator and various other water pumps to be mitigated. The new technology also allows for more open room which creates cooled air for the engine.

The new cooling technology will likely save around 2,000 gallons of fuel per year for a class 8 truck which also means less particulate emissions. In addition to improved efficiency of the cooling system Cummins has also refined the combustion chamber to provide fewer active re-generations of the after treatment system.

The Cummins 15L ISX engine is also the newest engine with the improved fuel system. Up until 2010 the traditional Cummins ISX engine featured the antiquated dual overhead camshaft design.

This type of injection system is called high pressure injection and operates to create injection pressure by the camshaft actuation.

The IFSM typically has a one section valve cover that is either plastic or chrome plated on older models of the Cummins ISX.

The latest versions of the Cummins ISX 15 engine keep getting more fuel-efficient as the technology keeps advancing. Cummins has stated that the newest ISX 15 can deliver up to 2 percent better fuel economy than previously reported. The newest Cummins ISX 15 operational efficiency actually delivers more horsepower than in older ISX engine models. 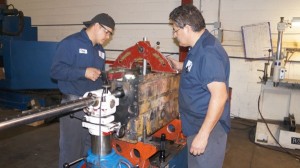 The SmartTorque system Cummins developed adds roughly 200 lb.-ft. of extra torque to the top two gears of the engine.

This means that Class 8 trucks can drive up steeper grades with much fewer downshifts making the ride that much smoother and less strenuous on the engine.

For other models of the Cummins ISX engine, the additional torque from the SmartTorque system is applied to the lower gears where it is needed the most.

Capital Reman Exchange reports that it can provide a remanufactured Cummins ISX 15 for half the cost of a new model, with no loss of efficiency or horsepower.

The fuel efficiency technology of the Cummins ISX engine uses the power of steam.

Harnessing the power of steam for propulsion purposes has been around for almost 2,000 years. The steam engine was first patented in 1606 by Spanish inventor Jerónimo de Ayanz y Beaumont. It was in 1698 that Thomas Savery patented a steam pump which condensed steam to create a vacuum to draw water into the chamber, then applied the pressurized steam to further a piston.

The same basic steam technology is used today in the Cummins ISX. This scientific process is called the Organic Rankine Cycle.

Applying the Organic Rankine Cycle (ORC) to the diesel engine is quite a different process. Heat in a standard reciprocating engine if often looked as something to be avoided at all costs, but with new technology it is utilized to aid in better fuel efficiency. The technology is called Exhaust Gas Recirculation (EGR) which turns excess heat from a major problem into the key to improved efficiency. In the Cummins ISX engine the heat comes out of the engine and travels directly to a superheater system. The superheater increases the temperature of the wet steam from the boiler into an extremely dry superheated steam. 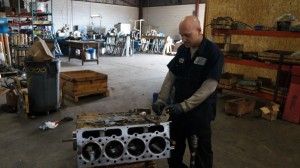 This concept of “dry steam” is steam that is heated beyond boiling. The dry steam contains a lot of energy which then turns a turbine in power plant systems. The turbine then turns a generator which converts waste heat into electricity. In the Cummins ISX engine the electricity is used to power a small electric motor built into the crankshaft. After the superheated dry steam’s energy is transferred into the turbine it later is sent to a recuperator then to a condenser where it is condensed and routed back into the boiler producing a closed loop system. This is quite a revolutionary concept for the Cummins ISX having both the internal and external combustion in one engine.

Waste energy can be described as energy that is not used for any practical purposes. Energy can be neither created nor destroyed. It is stored in the form of kinetic energy (in motion) or potential energy (stored energy).

What that means is that if a vehicle used 10 gallons of gas only 4 gallons would go to towards propelling the tires forward; the other 6 gallons are wasted. The Organic Rankine Cycle technology in the Cummins ISX 15 aims to recovery as much energy as possible through heat recovery. Across the board, only roughly 33 percent of energy is used towards moving the motor. 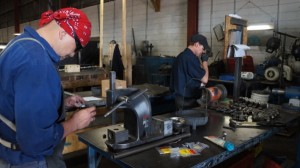 An example of waste energy in relation to trucks is when heat escapes from the engine to the outdoors.

The heat sources on a Cummins vehicle that help warm you up on a cold day include the Cummins ISX engine itself, the radiator, transfer case, transmission, differentials, U-Joints, brakes, cooling units,  and your heater.  Noise is also a heat source and is mostly a waste energy by product.

The second kind of energy is work energy. Work energy is harnessed energy being directed where you want it to go. However, there are always going to be other hindrances to 100 percent thermal efficiency.

Gravity, inertia, laws of aerodynamics and drag will always be barriers to overcome to capturing 100 percent of an energy source.

Cummins has always been on the forefront of emissions reduction and the development of technology that improves emissions output.

The first technology Cummins introduced to help reduce particulate emissions was cooled exhaust gas recirculation or EGR system. This system was introduced in the Cummins ISX CM870 model in 2002 and works by taking exhaust gas and re-circulates it back into the engine intake.

This process radically lowers the combustion chamber temperatures in the Cummins ISX engine thus reducing the creation of Nitrogen Oxide. NOx and NOy (NOx plus other compounds that are created during the oxidation process of NOx) are the common causes of air pollution, smog and acid rain.

Another big change in emissions reduction rolled out in 2008 when Cummins introduced Diesel Particulate Filter technology for the Cummins ISX CM871 model. Diesel Particulate Filter technology or DPF is a filtration system designed to trap particulate NOx matter created by the Cummins ISX engine. The second step of the system is the Diesel Oxidation Catalyst which further breaks down the particulate matter via oxidation of the ash. The ash of the diesel particulate is oftentimes called soot.

Then again in 2010 the Cummins ISX engine made another upgrade to its emissions technology with the ISX 15 CM2250 model. 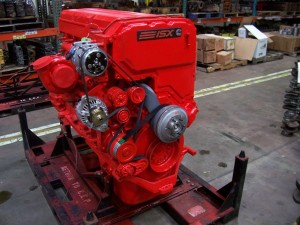 All Capital’s remanufactured exchange engines are dyno tested prior to shipping.

The system works by heating up the diesel exhaust fluid which is then pumped and injected into a decomposition area which then chemically reacts with the diesel exhaust in the Selective Catalytic Reduction chamber to reduce the level of NOx.

The Cummins ISX 15 uses one camshaft compared to previous versions which used two. This single camshaft design in the Cummins ISX engine is due to the introduction of the common rail fueling system in which diesel fuel is pressurized from already high pressure.

The fuel is stored in multiple piston pumps and transferred through tubes to a rail where the diesel fuel is stored under extremely high pressures up to but not including 35,000 psi.

For more information on the Cummins ISX engine or the Cummins QSX engine, contact Capital Reman Exchange at  http://capitalremanexchange.com/.

Rebuilding Tips on the ISX

2. Need to use a puller for front and back seal. a. Special puller tool to pull off the crankshaft. b. Kent-Moore Tool.

3. Back off the spring loaded tension before unloading it.

4. Totally non interchangeable between ISX and QSX. Use all specified parts.

5. Difference between ISX engine blocks. a. Some have EGRs and others do not. b. You can use both types of engine blocks if need be: The water fittings just need to be fitted with frost plugs.

6. Everything on ISX and QSX is heavy-duty. These engines use heavy-duty cams.

7. Make sure to set the idol gear properly. ISX has floating gears as they are on a floating hub. a. The gears float because of the backlash. b. There must be backlash on the gears. c. There also must be torque between all of the gears. d. The timing must be set properly between the gears. e. In a running engine the gears must be unloaded. Only the Detroit 60 Series has similar floating gears.

8. Pay special attention to the dual overhead cams: one for the valves and injectors and the other for the Jake Brakes.

9. Overall, strictly follow the service manual. Stick to OEM specifications and tolerances as this engine is a very precise piece of equipment and has little room for error. From the staff at Capital Reman Exchange in Denver.

In 2009, Cummins Inc. unveiled its on-highway engine lineup ready to meet the new Environmental Protection Agency (EPA) regulations for the North American market recently. Among the products introduced was the new Cummins ISX11.9 engine, a compact and lightweight medium-bore engine the company said was suitable for vocational trucks, day cabs, emergency vehicles and motor coach applications. Sharing common cooled EGR, VGT Turbocharger, XPI fuel system, electronic controls and aftertreatment system with the ISX15, the ISX11.9 was offered with ratings from 310-425 HP (231-317 kW) and torque from 1,150 to 1,650 lb.-ft. (1,559 – 2,237 N•m). The ISX11.9 was offered with an optional engine compression brake. All of Cummins 2010 on-highway MidRange and Heavy-Duty engines are compatible with long-life coolants and biodiesel blends up to B20.