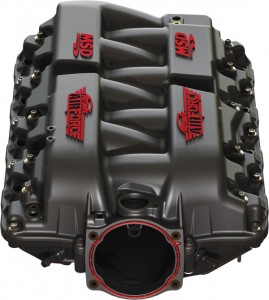 If you’re looking to bolt-on power and torque, the new Atomic AirForce intake manifold from MSD is the answer! This all-new polymer intake will increase the performance of stock and modified GM LS engine platforms and the new LT1 engine. MSD started designing the AirForce by addressing the performance shortcomings of the OE manifolds. Through the use of Computational Fluid Dynamic modeling MSD was able to optimize plenum volume with improved flow paths into each intake runner. By shaping the unique runners with a bell-mouth form, the air is packed into each runner evenly to equalize and maximize flow.

Each intake, from the LS series to the direct port LT1 engine, is a two piece molded design. This design allows for porting and modifying the runners while the polymer construction minimizes the weight and reduces the heat absorption. MSD also included provisions for further power gains by molding bosses on each runner to ease the installation of nitrous fogger nozzles used in racing applications.