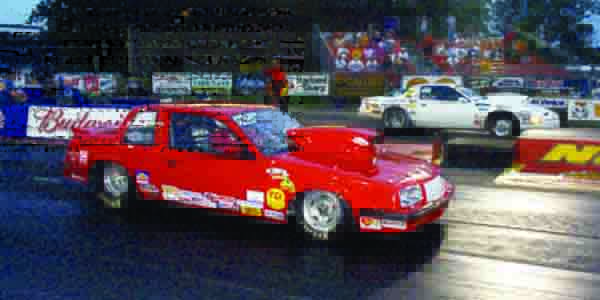 Bracket racing is the most popular form of drag racing. Participants in various bracket racing classes make up the majority of NHRA & IHRA land racers in the U.S.

Drag races usually cover 1/8 or 1/4 mile tracks on land, a couple hundred feet for mud and usually 1/4 mile for water. Some high-powered land drag classes limit distances to 1,000 feet to keep speeds down. As a result in all of these, duty cycle under full power is low compared to sprint car, road racing or top speed events where engines are under full load for a longer time interval. Engine cooling systems are less critical and fuel mixtures are leaner.

While motorcycle and snowmobile drag racing is expanding, a full-bodied car is quite common for land vehicle racing. Some are dragsters, altered or fiberglass or carbon fiber replicas.

• Some bracket racers use mechanical fuel injection; some use EFI;

• Some use nitrous oxide assist; power adder from 75 to 900 HP on nitrous;

• Nitrous oxide at the higher power levels can get hard to manage; the nitrous oxide bottle temperature is critical.

In land racing, there is usually an automatic transmission with a torque converter requiring a broad power band and good off-idle response. Torque converters with over 5,000 RPM stall speed are quite common. Therefore you can cam the motor for a torque peak at 5,000 to 5,500 RPM. That would be 255 to 270 deg. duration camshaft.

•
Engine power “on the motor”

For mud racing, truck or special chassis are common. For boat racing, flat bottom, tunnel and jet vee-bottom styles are common. In many heavier boats, such as heavy day cruisers with big engines, a transmission is used in some setups. Thermostat controlled engine temperature is helpful in boats to get engines up to temperature for more racing power.

Racing gas is common throughout grassroots racing, however there are other options.

E85 is becoming more popular as a racing fuel. For racing with E85, a fuel check is recommended to establish control over the ethanol-to-gas ratio. E85 at the pump is reported to vary from E70 to E90. Different fuel amounts are needed for that range of fuel mixtures. Mechanical fuel injection and carburetor intakes do not compensate for mixture ratio changes. Adjustment to jetting is necessary for different mixture ratios.

EFI with “open loop control” does not compensate for mixture ratio changes either. Reprogramming the air to fuel ratio map for different mixtures is necessary.

EFI with “closed loop control” can compensate for different mixture ratios automatically. The fuel volume is changed to match an air-to-fuel ratio target in the computerized fuel map.

Mixtures with more ethanol need a fuel map with lower numeric air-to-fuel ratios. Mixtures with more gasoline need a fuel map with higher numeric air-to-fuel ratios. Modifying an AFR fuel map is helpful for dealing with different ethanol mixture ratios. An engine builder with this experience has a distinct advantage over a backyard engine builder who may be doing this for the first time.

Bracket drag racing engines are expected to last a season if good parts are used. Some classes use throttle-limiting devices to lower power. Some faster classes use blown alcohol. For the most part, nitromethane is not allowed in bracket racing although low percentages of nitromethane are occasionally used. An experienced engine builder with knowledge of the air-to-fuel ratio needs for lower percentages has an advantage.

• Most of the engine specs are required to be original equipment except the following:

• Headers; usually stepped pipe diameters with a 4-into-1 collector design

• Hone block with 180 deg. F hot water circulating through it during the hone, with cylinder head honing plates torqued to the block; both to strain block in the close-to-usage condition for a precise honing job

• Accurate blue printing of block and heads to OEM based specs

OEM-style cylinder heads have “spec” port volume and chamber volume. This is without visible alteration to ports or combustion chambers. However, some engine builders are known to relocate ports in cylinder head castings with cutting and welding; then bead blast welds to hide the change.

These are often $5K+ cylinder heads, and frequently in cast iron. We had experience with cast iron or Stellite filler rod for welding. Pre-heating to a glow, over 1,700 deg, F was helpful. Premium Stock Eliminator cylinder head preparation such as this is definitely out of the realm of backyard engine building and well into the realm of an experienced engine builder. The labor cost alone for these engine builds can be several thousand dollars.

This engine class has an OEM-style carburetor, however fuel delivery circuit upgrades are common to increase the volume of fuel. Truing the carburetor venturies is done to increase airflow, however, stock appearance to airflow is a class requirement. These changes are also out of the realm of backyard engine building and definitely a specialty.

Example: an OEM small block factory rated at 250 horsepower can pull over 400 horsepower with the careful long block changes, cam duration changes, carburetor blueprinting, and step headers with most other parts in OEM specification

Example: an OEM big block factory rated at 425 horsepower can be pull close to 600 horsepower with the legal modifications and a careful build.

•
Mostly OEM style components, such as previously described in the Stock Eliminator category, but with the following changes:

•
Any intake manifold that fits under the stock hood.

Still another popular grassroots racing class is NHRA Competition Eliminator. The following are examples of specs:

•
A few forced induction classes for roots blowers or turbochargers

•
Most classes use ‘spec’ gasoline

•
Some classes use methanol

Another grassroots racing category is Nostalgia racing that is based on older drag racing engines and racecar platforms. Various classes from bracket racing to max effort blown nitromethane have their own restrictive rules. A lot of engine combinations change between many of the competitors.

IHRA is heaven for the engine builder who services the grassroots drag racer. Various bracket and competition eliminator categories are run at regional and national events all over North America and Canada. Categories range from stock body, stock engine to all-out dragsters with blowers and nitro fuel.

IHRA drag racing is dominant in the central and eastern USA and Canada. Numerous bracket classes for different power levels attract a thousand participants at an event. Engine build combinations range from OEM stock block on up to highly modified combinations.

Faster IHRA class are run for racecars & trucks including purpose-built replicas of a GM S-10 with a tubular frame and very high powered V8 engine build.

Several IHRA dragster classes attract engine builds again from stock block baselines with special EFI all the way up to supercharged setups and setups with nitrous oxide running over 200 MPH in the quarter mile. ν