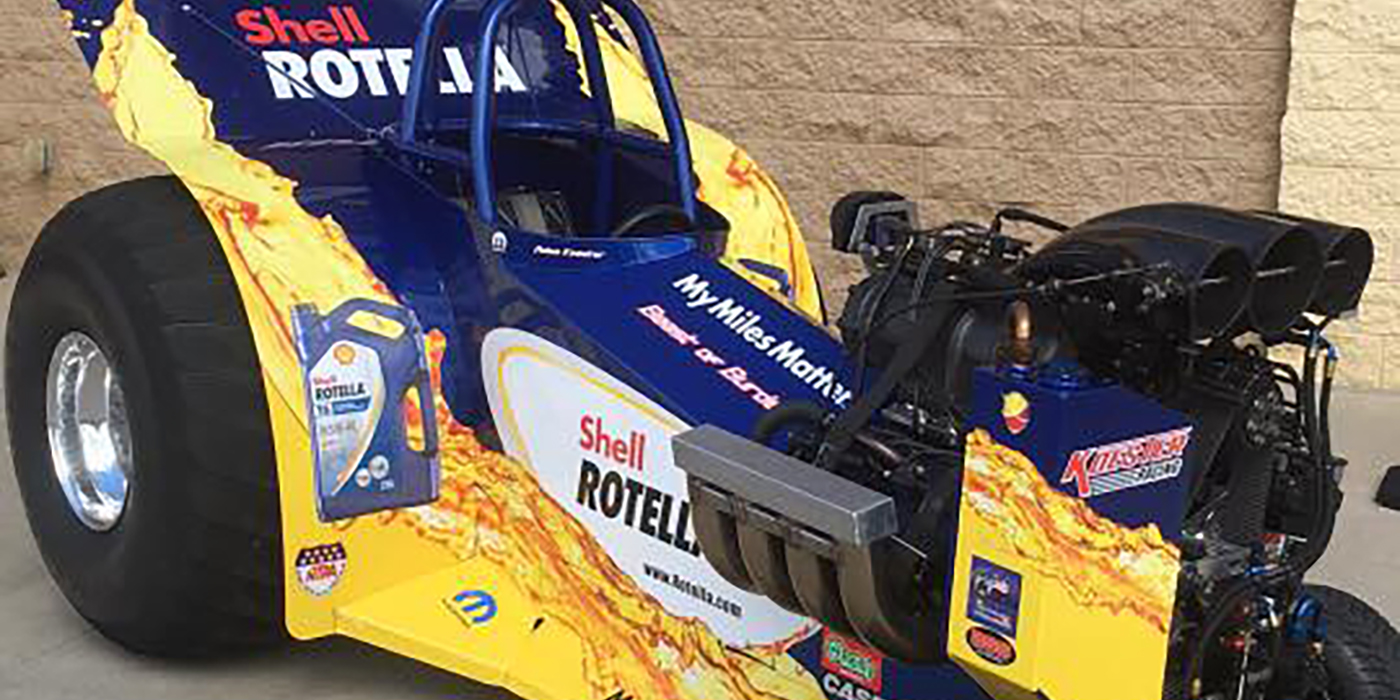 As other forms of motorsports keep pushing the boundaries of what’s possible with an engine, tractor pulling is no different.

When it comes to running alcohol-powered tractor pulling engines, two platforms reign supreme – Chrysler and Chevrolet. However, if your Adam Koester of Koester Racing, you take qualities from both engine platforms to create something even better.

“From a popularity standpoint, obviously the first thing that comes to mind is the Chrysler Hemi,” Koester says. “Another big one that probably was just as predominant before the Hemi was the big block Chevrolet, which is still a staple in numerous racing applications.”

Koester, who runs Modified Mini tractors ‘Beast of Burden’ and ‘Walk the Line,’ builds his engines with ideas from both the Chrysler and the Chevrolet.

“We use Chevrolet bore spacing, the Chevrolet rear thrust on the crankshaft and splayed main caps,” Koester says. “We also use things from the Hemi such as the crank flange, the hemispherical cylinder heads and the ignition. But the Chrysler and the Chevrolet continue to be the best things on the market and most commonly used.”

Koester’s engine builds start with Alan Johnson Performance Engineering blocks and then he takes care of the rest.

“We manufacture our own cylinder heads, rockers, valve covers, and intake manifolds,” he says. “We make our own main caps and pieces for the front cover. RCD Engineering does some stuff for us. We use Bryant billet crankshafts, GRP connecting rods, CP pistons, Victory valves, PAC springs, Callies camshafts and crankshafts. We try to use the best in the business for our engines. We try to put the best thing on the plate that we can.”

Speaking of putting the best thing on the plate that they can, in tractor pulling, that comes down to power. In order to stay competitive, the predominant engines are supercharged.

“The rule-based stuff falls around the 14-71 supercharger for most divisions,” Koester says. “As the engine has evolved over the years, we’ve done 8-71s, 14-71s, turbos, screw blowers, and now ProChargers are really coming back to life.

Of course, with these varying levels of horsepower on display at a tractor pull event, competitors are split into different classes. Some of the classes using alcohol-powered V8s are Modified Minis, Super Stock and Two-Wheel-Drive tractors.

“Then you get into some classes like the Two-Wheeler class. It operates kind of like our rules do. Then you have the Multiple-Engine Modifieds that kind of use the same engine combo we run. Then you get into the Blower Four-Wheel Drives, which are limited to 500 cid. They’re more along the lines of 498 cid with shorter strokes, but the same bore.”

No matter what class of tractor pulling you run, one thing remains the same, these engines will eventually need to be rebuilt. So what does it take?

“Everybody looks at tractor pulling and drag racing as the same thing, and obviously they’re not,” he says. “In drag racing, let’s say you’re running Nitro and you’re running 4 seconds at 300 mph. You tear the engine down every pass and inspect everything. In the Top Alcohol ranks, you’re running in the 5-6 second range at 270 mph and the maintenance isn’t quite there as much. They will pull the pan, they check bearings, check the valves and all that stuff.

“With tractor pulling, we run the engine three times longer in distance than the drag racers. It’s not as many rpms, but we still can turn them pretty hard. We don’t have to look at the engines as much as they do. We try to keep more fuel induced in the engine and we’re not running so much on the ragged edge because not necessarily every time in tractor pulling are you going to use all the power that you can generate.”

I don’t think the power gains in superchargers are as much as they have been in the last five to seven years… Now, if you pick up 30-50 horse by doing this or that or 20 here or 15 there by doing different things, that’s where we’re kind of evolving.

As far as maintenance goes on the engine, Koester says he’ll try to get 30-40 runs out of the engine before a rebuild will occur.

“About every 12-15 runs we will change and check bearings,” he says. “At the end of the year, the guys bring stuff to me and we’ll magnaflux the crankshaft. You can usually get somewhere in the 50-70 runs out of a crankshaft, depending on how the customer uses it. Pistons have really evolved, so the piston problem isn’t relevant anymore. They last pretty well. I usually put in new rods, wristpins, rings, and bearings. I’ll hone the cylinders and do a valve job on the heads.

With the spring pressures and stuff that we run, the seats really don’t get beat up, so we’ll lap the valves and after a couple seasons we’ll do a valve job on the heads and reassemble everything to go back out for another 30-40 runs.”

As other forms of motorsports keep pushing the boundaries of what’s possible with an engine, tractor pulling is no different.

“The biggest thing to remember about what we’re doing is the air inlet,” Koester says. “The superchargers are the number one key to the performance of the engine. Cylinder heads are important too and need to be upgraded. As cylinder heads advance along with camshaft profiles and valvetrain components that allow for more aggressive camshafts, that’s kind of where the engines are going.”

While tractor pulling engines and the folks at Koester Racing aren’t slowing down by any means, the power gains to be made now won’t resemble the gains seen in the past.

“I don’t think the power gains in superchargers are as much as they have been in the last five to seven years,” Koester says. “Back when we switched, you might see a 200-horsepower gain, but it’s just not to that point anymore. Now, if you pick up 30-50 horse by doing this or that or 20 here or 15 there by doing different things, that’s where we’re kind of evolving. The stretches aren’t as big, but we are eclipsing 3,500 hp out of a Roots blown 14-71 engine, which is getting a lot of power out of that engine.”

Next time you’re enjoying some high-octane, tractor pulling action, remember what goes into making one of these alcohol-powered engines perform at the highest level to squeeze out maximum horsepower! EB

Advertisement
In this article:Tractor Pulling