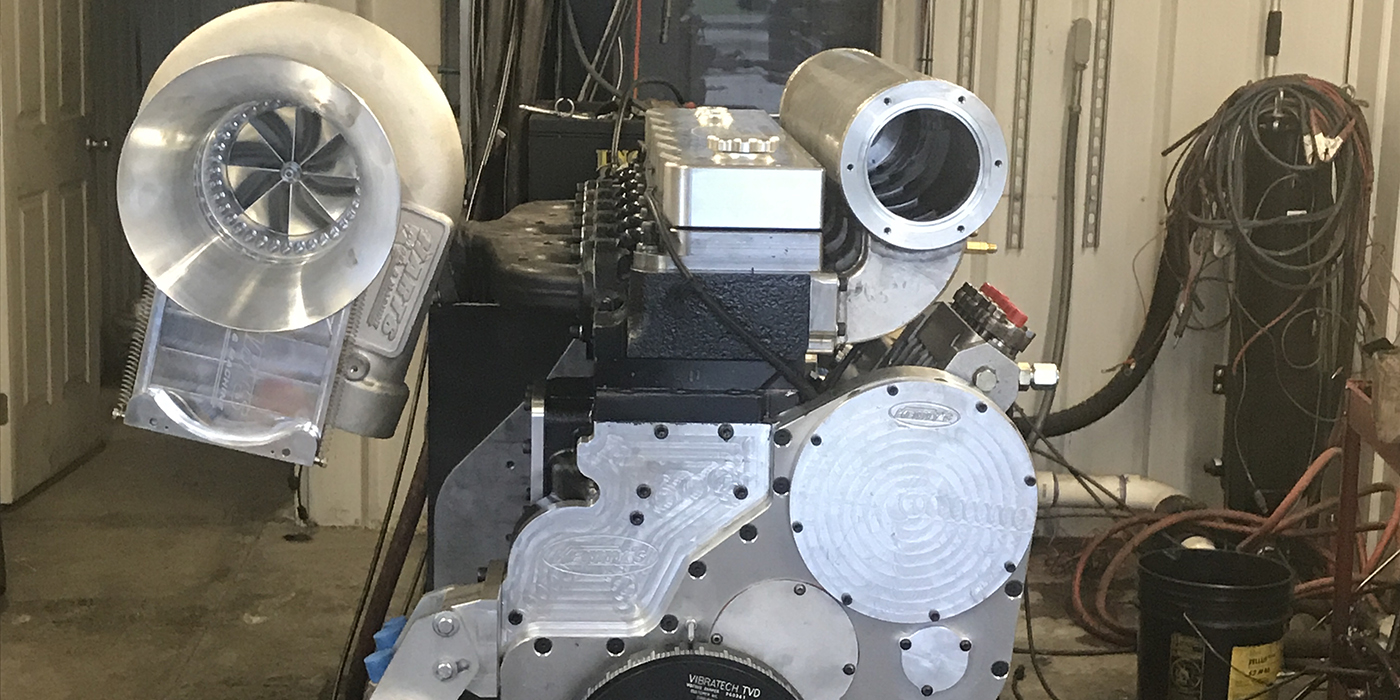 When it comes to O’Bryant Diesel Service’s diesel truck pulling engines, the builds they do for the Super Stock class make more power than can even be used! Find out what goes into this 3,400-horsepower Super Stock 6.7L-based Cummins build.

In the competitive diesel world, when you win, you start to get noticed. That’s exactly how Patrick O’Bryant made a name for himself and his diesel engine building prowess. He built a diesel pulling truck and left everyone else behind to emulate him.

Around the early 2000s, diesel trucks and truck pulling started becoming really popular in his area of Louisville, KY. Growing up on his grandfather’s farm surrounded by tractors, trucks and machinery, Patrick had a natural interest in diesel engines and making sure they were in tip-top shape.

“I always had an interest in tractors, trucks and machinery,” O’Bryant says. “When diesel trucks really started becoming popular around us we would go to the county fair to see the diesel trucks run. Then, I got myself a truck and started tuning it up and started working on other guys’ trucks and it snowballed from there.

“What got our name out there was building a pulling truck and having a lot of success. People started wanting to buy parts from us to emulate what we were running.”

From there, Patrick went to work for Harts Diesel for a few years on the manufacturing side, running CNC mills for injectors and turbocharger parts. He later started his own shop in Bethlehem, KY called O’Bryant Diesel Service in 2013, where they focus 99% on truck pulling diesel engines.

“It’s almost exclusively truck pulling performance applications,” O’Bryant says. “We build engines for all the diesel truck classes from 2.6 to Pro Street and the biggest class we work on is the 3.0 Limited class, as well as the Super Stock class. We pretty much specialize in the Cummins. We do work on some tractor stuff such as small block John Deeres. Unlike a lot of shops, we do both mechanical injection and electronic injection. We’ve got both platforms that are very competitive.”

O’Bryant Diesel Service is run by Patrick and Adam White, who also drives the shop’s own pulling truck. The diesel shop is around 5,000 sq.-ft. and has several machines in-house, but O’Bryant will also rely on local machine shops where necessary.

When it comes to the shop’s pulling engines, O’Bryant says the Limited Pro class engine work has to stay close to the collar because you’re limited on air and any gains made must remain secretive. However, when it comes to the Super Stock builds, it’s a different story.

“With the Super Stocks we’re making more power than we can even use, so there’s really no big secrets,” he says. “We’re more free to share what kind of power numbers we’re making and what kind of Harts we’re using and things like that.”

O’Bryant Diesel Service’s Super Stock Cummins engines are based on the factory 6.7L engine block and are built up from there.

“Of course, it’s getting a steel deck plate, ductile iron sleeves, lifter bushings for keyway roller lifters, the cam tunnel is opened up for a bigger 60mm roller cam, but it’s still based on the 6.7L Cummins,” he says. “It’s a two-valve-per-cylinder, 12-valve mechanical pumped engine. The cylinder head is a ductile iron, solid, recast cylinder head that Wagler Competition Products makes for us. The fuel system and the turbocharger system are all by Harts Diesel and Machine. It’s got an 18mm billet Pro Stock fuel injection pump. It’s capable of in excess of 2,300cc of fuel delivery. We’re running about 1,600cc. The engine uses a two charger, two-stage turbocharger system, and they’re both ball bearing Harts units.

“The manifold charger is a 4.5˝ inducer and the atmospheric low-stage charger is a 5.6˝ inducer. We run the thing at about 135-lbs. of manifold pressure, which is where we’ve got the gates at now. At that boost level, it produces a little over 3,400 horse.”

Internally on their Super Stock Cummins builds, the shop exclusively uses Diamond pistons, Total Seal piston rings, Cam FX roller lifters, an LSM camshaft, and Kenny’s Pulling Parts & Machine makes the connecting rods, the taper lock for the balancer, the girdle, the deck plate, and all those associated pieces. They also use Aviaid for the oil and fuel system supply pumps, and the engine utilizes a stock production, 6.7L crankshaft.

“Kenny’s Pulling Parts makes us some straight cut, adjustable timing gears, so he makes the crank, cam and pump gear, and of course the cam and injection pump are adjustable pieces,” O’Bryant says.

Capable of producing 3,400 horsepower, this Super Stock Cummins does it around 5,000 rpm at 135-lbs. of manifold pressure. The torque is just slightly higher than horsepower at that rpm range.

Sleeved and Turbocharged 6.7L Cummins Engine
Connect with us