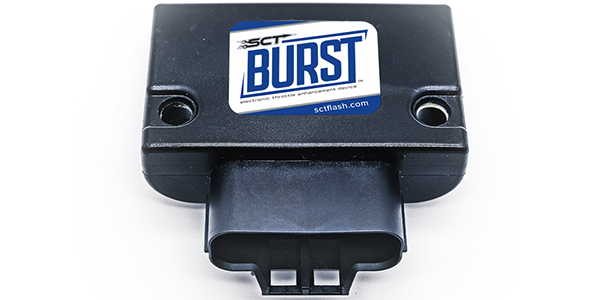 The SCT Burst is ideal either by itself or stacked with a tuner to give the driver all of the power right at their fingertips.

SCT, an engine tuning and calibrations brand, has announced the
release of the SCT Burst throttle enhancement device. The SCT Burst is a plug-and-play device that allows anyone to adjust the throttle responsiveness of their vehicle. This easy to install device gives the driver access to a control knob that increases how quickly their vehicle responds to changes in throttle position, without voiding the vehicle’s warranty.

The SCT Burst is ideal either by itself or stacked with a tuner to give the driver all of the power right at their fingertips.

Marcelo Gomez, chief marketing officer for SCT, explains why this is a giant step for SCT, “SCT has devoted itself to the idea that engine tuning and calibration is a critical part of customization, and that enthusiasts should have the power to unlock the performance potential of their vehicles. The addition of the SCT Burst to our already diverse product line makes vehicle customization available to anyone, with no technical or tuning expertise necessary.”

When asked about this new device Jill Hepp, senior director of marketing for SCT stated,” The SCT Burst is an important step in the ever-changing product offerings from SCT. While auto enthusiasts have always used our products to tune their vehicles, many vehicle owners were looking to start off small to get that immediate feel of increased performance. The plug-and-play SCT Burst takes one of the most important aspects of vehicle customization, throttle response, and makes it available with one simple installation giving them that seat of the pants feel right away.”

Advertisement
In this article:SCT, Tuning