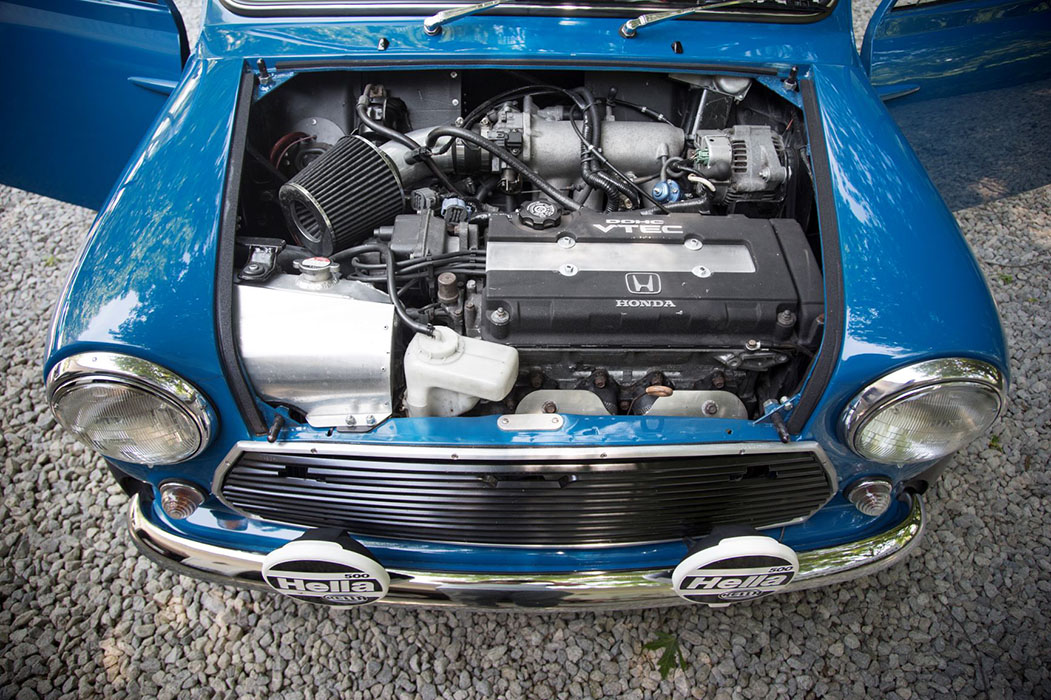 Engine swaps belong in a world of their own. After a little digging, you can find multitudes of ingenious swap ideas, whether it be small block to big block, diesel to gas, or many other combinations.

During the early days of WWII, American bombers were falling victim to the German Luftwaffe and we were suffering incredible losses. The problem? We didn’t have a fighter plane that had the range to escort the bombers to Germany and back, nor did we have one that could compete at a high altitude with the Luftwaffe’s impressive fighters..

Initially, none of the existing or new fighter planes commissioned by the armed forces were able to fit the bill. They all fell short in some category. One such plane was the North American Aviation P51. Originally built and designed as a fighter-bomber, they were powered by the Allison V-1710 engine and ultimately only performed well at low altitude. They weren’t the answer.

Acting on a hunch that there was hidden capability in a P51, a couple of mechanics decided to replace the Allison engine with a Rolls-Royce Merlin. What they got was a fighter with the capability and the range to escort the bombers all the way into Germany and back and the power to perform at high altitude and take the battle to the Luftwaffe. It was a major turning point in the war, and quite possibly the engine swap for all time.

When I started this article, this was the first thing I thought of even though I knew I would be talking about automobiles. It was an easy tie-in however, since the post-war years kicked off the growth of hot-rodding with a booming economy and thousands of young servicemen returning to the states looking for fun.

Admittedly, for years when I thought of engine swaps, I narrow-mindedly defined it to myself as stuffing a Gen1 small-block Chevy into a Vega or VW Beetle, or something along these lines. When the LS swaps became popular, they made perfect sense to me.

As I dug into the subject, I learned a whole world of ingenious engine swapping, then realized I already knew half of it. I remembered the countless classic car 6- to 8-cylinder swaps that I have done and then thought of the one-off swaps like the Jeep 4- to 6-cylinder or the late model Toyota pickup engine into a classic. Small block to big block, diesel to gas, my list kept growing, but I never thought of them as engine swaps, I was just doing what people requested, it was how I made my living.

I also remembered some engine swaps done by friends such as a Honda engine into a Mini Cooper, an LS engine into a Miata, or a BMW V8 into a Volkswagen GTI. As engine swaps became a staple of hot rodding, the practice became more and more common and the success of some led them to be done repeatedly with resounding success. Here are some of the popular trends today – in no particular order.

Like them or not, no one can dispute the popularity of these cars. While the later models primarily benefit from computer tuning, bigger turbos and bolt on performance, the first generation of water-cooled VWs from the ‘70s and the second generation models from the ‘80s see common engine swaps from third and fourth generation donors.

From the factory, VW performance saw a considerable upswing with the introduction of the 1.8L 16-valve engine in the mid-‘80s and their well-known 2.8L VR6 engine in the early ‘90s. By the end of the decade, you could also find a 3.2L VR6 or the very popular 1.8T turbocharged engine between the fenders of a VW. All of these performance-oriented engines hold solid spots as popular swaps into the Gen 1 and 2 models to replace the smaller displacement 8-valve engines that were original equipment.

Not short in popularity, Volkswagen’s TDI (Turbo Direct Injection) Diesel is coveted by many a diesel enthusiast for not only its power and torque, but its ability to move most vehicles effortlessly along the highway and get 40-50 mpg in the process. The TDI has been the choice for many an engine swap into an almost endless list of vehicles anywhere from a Toyota Forerunner all the way to a Corvette.

Popular for quite some time, transplanting a Subaru engine into a VW is practically a match made in heaven. The boxer configuration of the Subaru engine so closely matches that of the VW Boxer that it’s a great fit. The purist in all of us appreciates the original air-cooled VW engines, but you just cannot match the dependability, power and fuel economy of a modern fuel injection system.

On top of that, since the Subaru engine is water cooled, you can easily eliminate the lack of heat that is a common problem on early air-cooled VW’s. If you’re swapping a Subaru into a VW Vanagon that came with the water-cooled boxer engine, your job is even easier.

Typically, these Subaru engines are easy to find and reasonably priced. WRX and STi engines are some of the more powerful, with the STi engines topping 300 hp. Even though a little more expensive, they are a great option when looking at the high end of the performance spectrum.

Known for their power and dependability, Honda engines have been on the popular swap list since the early ‘90s, and some might argue that the still popular B-series engine swaps set the bar in import performance. The B-series swap into a Honda Civic originally equipped with a D-series engine transformed a mild machine into a monster.

Performance parts and components for Honda engines are seemingly endless and Honda engines quickly worked their way to the top of the list, ending up in a number of different makes and models. The tricky part is there are so many different Honda engine designations, it pays to do your homework to make sure you get what you want. The good news is that it is all well documented by Honda engine swap gurus around the world.

One of the most popular swaps of our day can’t go without mention. Chevrolet released the first new LS engine in 1997 and it didn’t take long for enthusiasts to realize the awesome potential of the new engine. They are plentiful, affordable and dependable and there is an endless list of performance parts available. It’s no wonder they practically dominate the world of engine swaps.

They have been swapped into everything from A-Z, mild to wild, and their popularity continues to grow. The LS swap is nowhere near burning out because the incredibly durable and strong blocks make them a great foundation for performance.

There are many variations and different displacements of the LS, so you can tailor the perfect one for your project. Best of all, so many of them have been done, it’s easy to find tips and tricks online, as well as performance parts. It’s simply a great swap.

There’s no need to explain the popularity of diesel engines in today’s popular trucks and whether it’s a Powerstroke, Duramax or Cummins, you’ll find them swapped into a number of different applications. One however, stands out among the crowd in popular swaps and that’s the Cummins engine into a Ford.

The Cummins engine was first used in Dodge trucks in 1989. Cummins was already well-known for their heavy-duty engines, making the trucks an instant success. The Cummins diesel was simple and durable with tons of modification potential.

Another reason that the Cummins swap became so popular in Ford trucks was partly due to a series of common problems with the Ford Powerstroke engines, and since Ford trucks have always been known as some of the more luxurious on the inside and Cummins engines some of the most durable, it made this swap a perfect melding of worlds.

One of the hottest new engines that beckons for engine swap potential is the LS Classic series of engines by Lokar. The core of these new engines is a brand-new GM 495 horsepower LS3.  Displacement is 6.2L, compression is 10.7:1. The difference between the multiple choices is what you see. Literally.

Different valve cover finishes including paint, chrome or aluminum are available and engines come unpainted or Chevy orange. They are all fuel injected and complete with harnesses and ECU; everything you need to drop one in and fire it up. The engines are designed so the majority of the modern components are hidden for a great classic look with modern performance and dependability.

Although some engine swaps are more popular than others, the more unique and creative swaps that get done, the more they get repeated and some day they too may be on the list. EB