One solution to that problem is the diesel engine with more torque, horse power and better fuel economy. This applies not only to heavy duty applications but small displacement turbocharged inter-cooled diesels as well. The diesel engine will play just as important part of the future of the automotive industry as the Hybrid.

If you have any doubt about the performance and reliability factors of modern diesel engines, just look at the first and third place winners of the 2006 24 hour race at Le Mans. They were Audi diesel powered racing vehicles.

For the first time ever diesel-powered vehicles accounted for more than 50 percent of the vehicles registered in the European market.

The International 6.9L and later the 7.3L diesel engines found largely in Ford pick-up trucks of the ’80s and through the millennium are considered by many as the first diesel engine to break the barrier of being widely accepted and embraced by the average John Q. Public in America. There are over 3.5 million of these engines out there in vehicles ranging from contractors pick-up trucks to airport vans and school buses that transport your children. All of these vehicles are in the target market that typically will purchase one or more reman/rebuilt engines This is great news for the reman/builder industry.

The early 6.9L and 7.3L engines were indirect ignition (IDI) engines with cylinder heads that used pre-combustion chambers. Then later in 1994 the 7.3L with direct injection (DI) and turbo charging carried the label "Powerstroke" that everyone is familiar with.

The proliferation of the IDI engines is pretty simple to understand but things get real interesting when you move into the DI engines. Here, the front covers also become key in the mix of all the changes.

So let’s take a look at all of the components year by year and give you the insights and images needed to understand all of them. One thing critical to identification of diesels in general is remembering that serial number breaks rather than the year of production are most important. If you keep that in mind you should never make a mistake as to when to use what.

Starting at the beginning, the 6.9L IDI engine was introduced in 1983 with the first series block (c/n 1805440C1). This is considered by most as not a viable block casting for rebuilding. It is easily recognized by the lightweight or narrow gusseting across the upper area in the front of the block (Figure 1).

In 1984 the second series block (c/n 1807996C1) was introduced. With improved structural integrity, this is considered the block to use for all applications of 6.9L engines. To rapidly identify it, look at the same area in the front of the block (Figure 2) with the wide gusseting. The 6.9L was never turbocharged, therefore you will only require one long block part number for all 6.9L applications.

This block was prone to cavitation damage on the exterior of the cylinder walls on the left bank thrust/valley side of the cylinders. For more details about cavitation see "Core Corner: Fighting Truth Decay About Cavitation" (Engine Builder, January 2006, page 38).

These walls were recorded as moving as much as .004?. Since this block looks nearly identical to the 6.9L, the quick visual for identification are the coolant ports at the corners of the cylinder deck. The 6.9L has triangular coolant ports (Figure 3), while the 7.3L coolant ports are round (Figure 4).

Block c/n 10809000C3 is the turbo block and the end of the IDI chapter. These engines carried serial numbers 1,116,331 to the end of production for the family. Note that the casting number is identical to the non-turbo block other than the C3 at the end. Make no mistake: this is a different and stronger block, which you may certainly use for IDI applications but do not attempt to do it the other way around. You will regret it.

One of the key differences is that the main webs on the turbo blocks are approximately .100? thicker. The visual aid for this block can be found at the rear of the engine. The turbo block has a 1/4? pipe threaded hole for the oil feed for the turbo (Figure 5). This same port on the non-turbo block is just 1/8? and is used for the oil pressure gauge. There are non-turbo blocks out in the field that have been drilled and tapped to 1/4? so it is always a good idea to verify serial and casting number.

The first series block for the DIT Powerstroke (c/n 1818270C2) runs from serial number 501 through 661,973 and fits the years of 1994 to mid-1998. You can see why the serial number breaks are important now. All engines from this point forward are turbocharged and had direct injection. The blocks are noticeably different than the IDI version so there is no confusion of identification.

There are, however, two different DI blocks. The first series design is readily identified by the lack of solid webbing in the valley up to the deck of the block (Figure 6). So if you’re looking down on the deck toward the lifter bores it is one big opening.

The second series block (c/n 1825849C2) is used from mid-1998-2004 with serial number 661,974 through 2,030,402. This block received some structural improvements such as some additional crank counterweight clearance in the lower crankcase. The visual identifiers are the full casting separations between each cylinder in the lifter valley to the block deck (Figure 7).

Crankshafts for the indirect injection engines used from 1983-1994 are easy to identify because they are all the same. They all used a forged steel crankshaft (c/n 1805420C1) with a 9-hole rear flange and the thrust flange located on No. 3 main journal (Figure 8).

The direct injection engines get a little more interesting. Riddle me this: when are three different crankshafts actually two? When they are used in the 7.3L DIT engine.

The first two crankshafts are considered the same product. The only difference between them is the size of the hole bored into the rod throws. One (c/n 1818200C1) has 1-1/8? bore balance holes in the rod throws and the other (c/n 1818200C3) has 1? bore balance holes drilled in them. The reason for the change in diameter of the balance hole was strength and reliability. Despite this difference, these cranks are considered the same and are fully interchangeable (Figure 9). Use either of these cranks in serial number engines 501 through 661,973.

The third crank (which is actually the second design) has no balance hole in the rod throw at all and has a slightly different configured counterweight. This crank can only be used in the later block casting (c/n 1825849C1) which has the clearance (Figure 10). This crank is used in serial number 661,974 through 2,030,402

The stamping number on the back of the camshaft is 181062C1 and was used in both Ford and International applications from serial number 501 through 661,973. It is the upper most cam shown in Figure 11.

The standard duty cam has stamping number 1825912C1 and was used in engines with serial number 661,974 through 2,030,402. It no longer has a fuel rail pressure pump eccentric.
Ford Heavy Duty (F 650-750) and International went different ways here and continued to use the mechanical pump. Ford went to a frame mounted fuel conditioning module that does everything but put perfume in the cab. They went to an electric pressure pump; it is the bottom camshaft shown in Figure 11.

The middle camshaft in Figure 11 is the cam used for Ford F650-750 applications and International trucks. This camshaft continued to maintain the mechanical rail pressure pump and carries the stamping number of 1826779C1.

I found no posted serial numbers for these engines but since their applications are unique it really makes no difference.

The first design is a forged connecting rod (c/n 1812003C2) that would be used with either of the crankshafts that have balance holes in the rod throws regardless of the size (Figure 14). It is easily differentiated from the second design which is made of Powder Metal.

The second design connecting rod is a Powder Metal with a "crack" parting line for the rod cap and bolts. It has a tapered piston pin end of the rod and the casting number is printed in ink so unless it is new out of the box you won’t know the number (Figure 14).

The second design is identical to the first in appearance but being just a bit heavier is a more stable casting. This head (c/n 1805855C1 and 1809215C91) is considered the only heads viable for rebuilding.

All 7.3L heads have head bolt holes for 1/2? head bolts and carry casting number 1809030C3. This casting comes in two flavors: one that has soft plugs on the intake side of the head and one that just has a port.

The gasket covers both so it really does not make any difference which is used. Yet if a technician with a sharp eye sees it you might want to have the explanation (Figure 16).

This was the first series direct injection cylinder head (c/n 1821727C92). The identifier to this cylinder head is the 8 bolts (Figure 17) for the intake manifold. Use this head from serial number 501 through 375,548.

This is the second series direct injection head (c/n 11825113C1) and is easily identified by the 10 bolts (Figure 17) for the intake manifold. It was used from serial number 375,549 through 2,030,402. A 10 bolt cylinder head may be converted into an eight bolt by filling the two bolt holes circled in Figure 17. The heads are identical other that the amount of bolts.

There were four distinctly different pistons used for the various iterations of the 6.9L/7.3L engine. Each is unique and all are easily identifiable by their appearance. See Figure 18 for the identification of each of them.

No matter how much the engine remanufacturing and building industry changes, one thing will always remain the same. Identifying what type of engine on which you’re working will be an important – and challenging – part of the process.

Today the front cover has become such an integral part of application identification that it has become as important as any of the major component castings. That’s extremely important to remember when working on the Powerstroke engine. As you’ll see in the charts on page 38 and 39, knowing which cover goes with which application can save you a lot of headaches. Not knowing can cost you time and money.

CREDITS AND SPECIAL THANKS

Special thanks must be extended to Franklin Power Products in Franklin, IN, an authorized OE reman for these engines. Franklin has just moved into a new 300,000 sq. ft. facility that is steeped in tradition but also contains some of the most advanced technology available in remanufacturing.

The company was originally founded by International Harvester as a remanufacturing center. Franklin gradually evolved from producing gasoline engines to being one of the leading remanufacturers of mid-range diesel engines and fuel systems, with over 500 employees. In 1995 Franklin became a part of Remy International, which has a strong presence in the OE market.

The company recently moved away from line production to cell remanufacturing, a move that is cutting edge in this ever-changing industry. Over 200,000 engines have been recycled through Franklin (Figures 19-22).

Roy Berndt has been in the Automotive Rebuilding and Remanufacturing industry for over 30 years. He is an ASE Master Machinist and co-author of several SAE documents and Standards. 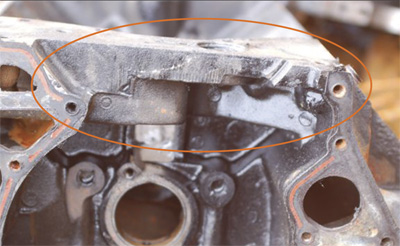 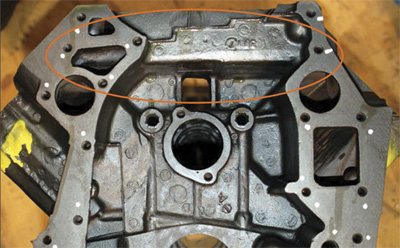 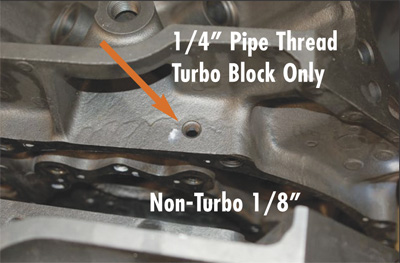 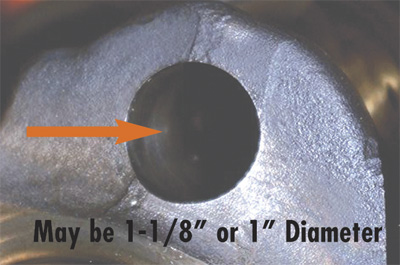 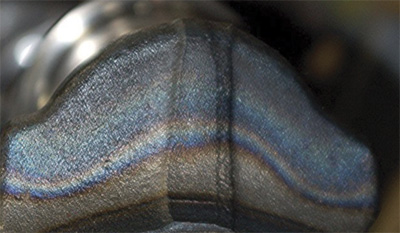 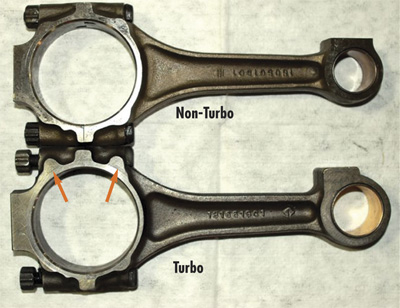 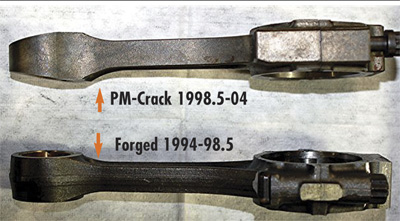 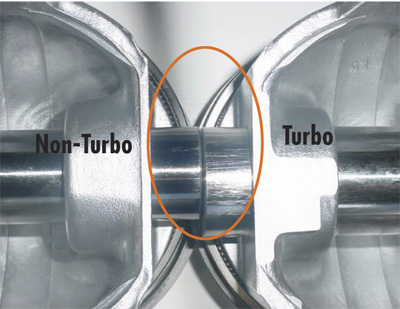 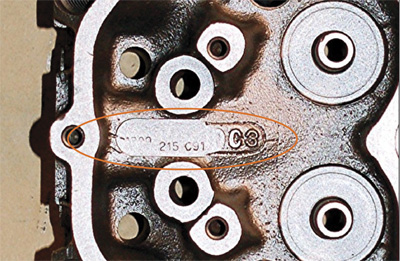 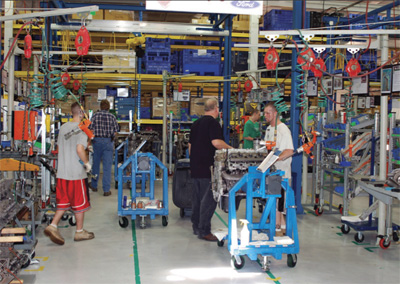 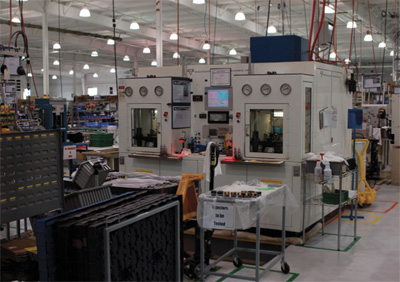 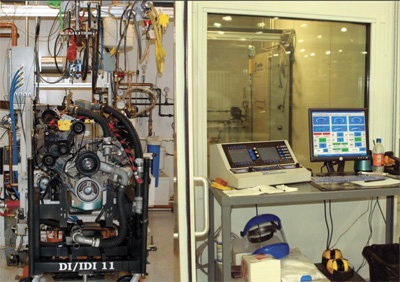 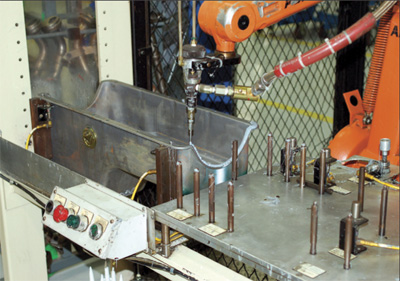 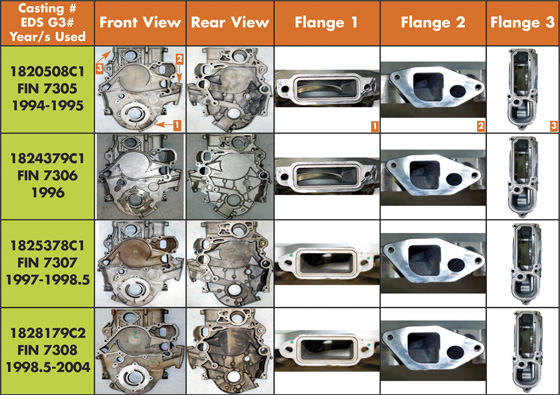