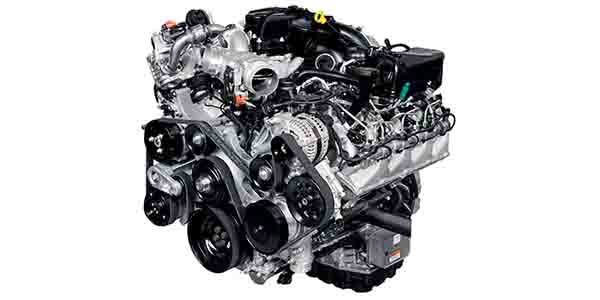 Ford Power Stroke diesel engines have a history that dates back to 1994. The first in this series was the 7.3L engine, which was designed by Navistar for Ford. The 7.3L featured direct injection and turbocharging, and was probably the most reliable and durable engine in the series.

Ford Power Stroke diesel engines have a history that dates back to 1994. The first in this series was the 7.3L engine, which was designed by Navistar for Ford. The 7.3L featured direct injection and turbocharging, and was probably the most reliable and durable engine in the series. The only major problems with these engines have been hard cold starts due to extreme valve seat wear or leaky o-rings on the injectors.

Leaky o-rings inside the HEUI injectors can cause a loss of oil pressure. On the first generation 7.3L engines (1994-1997) that have a return line back to the fuel tank, leaky center o-rings inside the injectors can allow oil from the engine to be pumped back to the fuel tank, causing a mysterious loss of oil from the crankcase. The fix is to replace the worn injector o-rings. Ford has upgraded pink center o-rings for these applications (the older ones were green or blue).

Other issues included injector failures caused by water in the fuel. Water contamination in the fuel and ruin a set of injectors very quickly so it is important that the fuel filter/water separator is drained weekly to protect the fuel system. 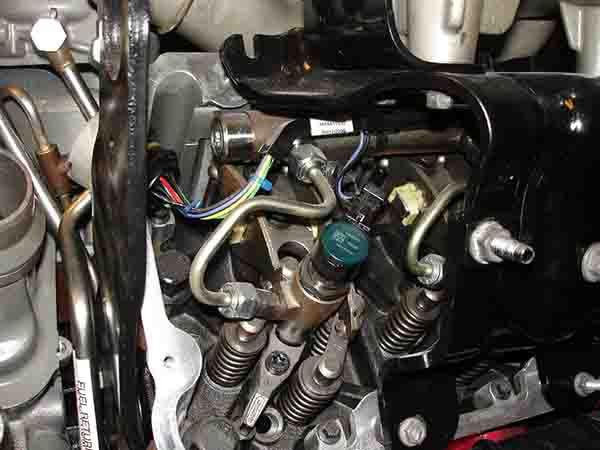 One of the major changes on the 6.4L Power Stroke was the switch to high pressure common rail fuel injectors. The new injectors improved fuel economy and lowered emissions.

The injector sleeves in the 7.3L cylinder heads are brass (first generation) or stainless steel (2nd generation), and are held in place by locking adhesive. If the engine overheats, the sleeves may crack or loosen and create a leak. The sleeves keep coolant and fuel apart, so high pressure fuel will force its way into the cooling system pushing coolant out of the radiator into the overflow purge tank. Coolant can also mix with the fuel when the engine is off, which isn’t good for the injectors or piston rings.

The first generation 7.3L Power Stroke engines used an engine-mounted mechanical fuel pump, which had a high failure rate. The 2nd generation 7.3s used a frame-mounted electric pump to supply the high-pressure oil pump and injectors. The most common failure on these engines was a bad injector pressure regulator (IPR) that controls oil pressure to the injectors. The injectors need a minimum of 500 PSI of oil pressure to start the engine. Anything less and the engine won’t start.

The 7.3L could not meet new emissions requirements so Ford asked Navistar to develop a new smaller displacement engine that would be cleaner and more fuel efficient. That engine was the 6.0L, which was offered from 2003 to 2007 in Excursion, F-Super Duty and F-650 and F-750 trucks, and 2003 to 2009 E350 and E450 Econoline vans. The 6.0L Power Stroke turned out to be a disaster for Ford.

The 6.0L was notorious for problems with head gaskets blowing out, leaky EGR coolers, plugged oil coolers, and high-pressure fuel pump and injector failures. The 6.0L engine had only four head bolts per cylinder, which proved to be inadequate with the highly boosted engine. The fix for this problem has been to substitute stronger ARP chrome moly head bolts for the factory TTY bolts, to make sure the head and deck surfaces are as flat and smooth as possible for a long lasting seal.

The new Garrett variable geometry turbo (VGT) also proved to be troublesome. The angle of the vanes inside the turbo could be changed to increase low RPM boost, but exhaust soot recirculating back through the EGR system would build up on the vanes and cause them to stick. 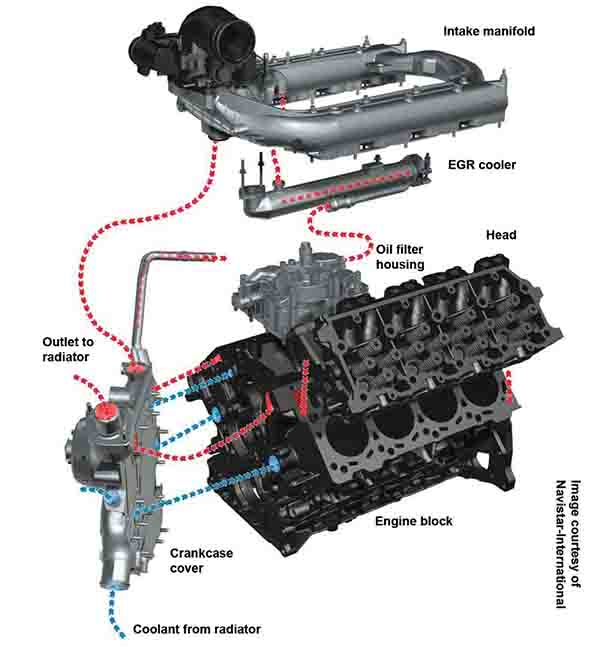 The EGR cooler was one of the most troublesome components on the 6.0L Power Stroke. EGR coolant leaks and soot clogging were the main issues.

The oil cooler on the 6.0L was relocated to the top of the engine under the oil filter. Over time, it could become clogged especially if the vehicle owner did not change oil every 5,000 miles, as recommended by Ford. This would result in a rise in oil temperature that led to lubrication breakdown and increased wear in the injectors, injection pump and turbocharger.

The EGR valves on the 6.0L (as well as subsequent Power Stroke engines) have had problems with soot buildup, which clogs the EGR valve and EGR passageway. But the most troublesome component has been the EGR cooler, which uses coolant to cool the hot exhaust before it is routed back into the intake manifold. The Ford original equipment EGR coolers are notorious for leaking coolant internally into the exhaust. A leak can produce white smoke following a cold start. If the leak is bad enough, coolant can fill up the exhaust manifold and flow back into a cylinder hydrolocking the engine! Aftermarket stainless steel EGR coolers are available to replace the original Ford cooler. EGR delete kits are also available to eliminate the leakage problem entirely, but installing such a kit means the engine is no longer emissions compliant.

The high pressure oil pump (HPOP) on the early 6.0L (2003 to 2004) had a problem with premature drive gear failure. Cracks would develop in the gear causing the gear to break. The location of the ICP sensor on the pump also exposed it to excessive heat and contaminants in the oil, which could cause it to fail. The pump was redesigned in late 2004 with a stronger drive gear, and the ICP sensor was relocated to the fuel rail under the passenger side valve cover.

Other problems included leaky o-rings on the HPO manifold, which were later upgraded to a better Viton material.

The 6.0L engine can also develop coolant leaks around the fuel injector bores in the cylinder heads. Ford TSB 09-26-1 tells how to diagnose coolant leaks in this area with the engine in the vehicle.  Basically, you remove the injectors, clean the injector bores and use a hand pump to pressurize the cooling system while spraying soapy water into each bore. If you see bubbles, there is a crack that is leaking coolant. If the heads are off the engine, you can pressure test them in a tank or use penetrating dye to check for cracks in this area.

After parting ways with Navistar, Ford designed its own next generation diesel, the 6.7L Power Stroke. Early production engines had problems with premature turbo bearing failures.

Ford had so many problems with the 6.0L Power Stroke engines that they had to extend the factory powertrain warranty to 6 years or 120,000 miles as part of a class action settlement with unhappy Ford truck owners. The extended warranty covered the high-pressure oil pump, cylinder heads, head gasket, EGR valve, EGR cooler and oil cooler, all components prone to high failure rates on these engines. But the extended warranty ran out in 2013 so Ford truck owners with the 6.0L Power Stroke have been on their own ever since.

If you are rebuilding a 6.0L Power Stroke, Ford technical service bulletin TSB 07-10-4 provides some guidance on identifying which cylinder heads might be on the engine. Heads made in Indianapolis with serial numbers 6,000,000 to 6,723,721, and heads made in Huntsville with serial numbers 1 to 299,092 are first generation “pre-commonized” heads with different head gaskets, head dowels, injector hold down clamps, rocker arm carriers and bolts than the later “commonized” heads with higher serial numbers. Some of the earlier pre-commonized heads use 18 mm straight dowels and some use an 18/20 mm step dowel. The later commonized heads all use 20mm straight dowels.

The next engine in the Power Stroke series was the 6.4L from 2008 to 2010. The 6.4L has a short block similar to the 6.0L but with a sightly larger bores (3.87 inches vs. 3.74 inches), different heads, bigger head bolts, a compound twin turbo setup (a smaller low pressure turbo to boost the larger high pressure variable geometry turbo), two water pumps, high pressure common rail fuel system with piezo injectors, and an Diesel Particulate Filter (DPF) in the exhaust to reduce soot emissions.

To date, most of the problems reported on the 6.7L engines have nothing to do with the engine itself but with the cooling system (radiator leaks), EGR system (soot clogged EGR valves and EGR cooler), and the exhaust aftertreatment system (clogged DPF filters).

Ford’s unfortunate issues with the 6.0L eventually led to parting ways with Navistar, so the next generation Power Stroke was a Ford in-house design. Introduced in 2011, the new 6.7L engine has six head bolts per cylinder to reduce the risk of head bolt stretch and head gasket failure. The 6.7L has been a fairly reliable engine, with the only problems reported so far being external ones such as radiator coolant leaks, plugged DPF filters, some soot clogging on the EGR cooler and EGR valve, some issues with EGR temperature sensor failures (see Ford TSB 12-12-10) and turbo failures on some 2011 and 2012 trucks. The first generation turbos on these engines used ceramic bearings, which were prone to premature failure. Later production turbos were fitted with steel ball bearings on the turbo shaft. 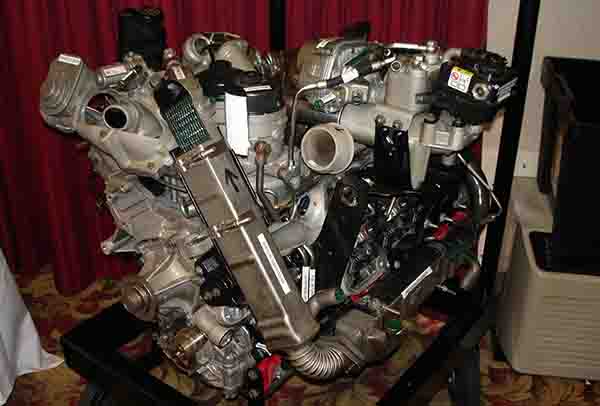 The 6.4L Power Stroke was an upgraded version of the 6.0L but still suffered EGR cooler problems.

One thing Ford has stressed on the 6.7L Power Stroke engines (as well as its older engines) is the importance of regular oil changes and using a high quality motor oil that meets their lubricity requirements. If truck owners fail to change their oil according to the factory recommended service intervals, they are asking for trouble.

For model year 2018, Ford is introducing a brand new 3.0L V6 turbo diesel engine option for F150 pickup trucks. It is a 60-degree V6 with 16:1 compression, high-pressure common rail fuel injection system with two turbos. The new 3.0L V6 diesel is similar to the “Lion” engine used in PSA Peugot Citreon and Jaguar Land Rover. It has a compacted graphite block, 3.31 x 3.54˝ bore and stroke, aluminum DOHC 4-valve heads, and high-pressure common rail fuel system. Power output will be around 440 lb.-ft. of torque and 255 hp. The engine will be mated with a 10-speed automatic. Time will tell what this engine’s weak points will be.

Advertisement
In this article:diesel, engines, Ford