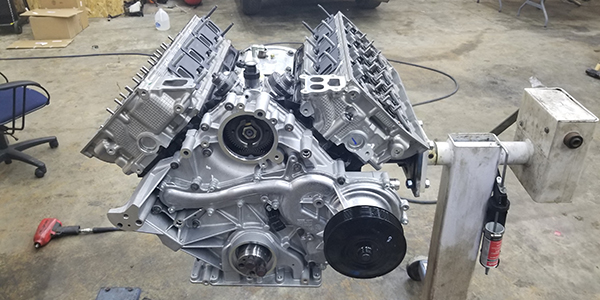 Growing up in rural Indiana means you grow up around a lot of diesel trucks. As an Indiana native, it was only natural that John Roberson developed a passion for fixing and modifying diesels.

Roberson’s diesel addiction was shared by his good friend and business partner Harlan Clemons. The two grew up owning Ford trucks, and Harlan even ran a truck group called Outlaw Off-Road, where they would go to 4X4 Jamborees.

“That’s when diesel stuff started really taking off,” Roberson says. “Our own work on our trucks turned into working on friends of friends’ trucks and then it became a full-time job. I always wanted to be an entrepreneur. My dad started his own business, so it was one of those things I knew I wanted to do, but I didn’t know it would be with my hobby. You can’t beat that.”

John and Harlan opened their diesel shop, Outlaw Diesel Performance in Greenfield, IN in 2012.

“When Harlan and I first started out, I would handle the company stuff – advertising, sales and dealing with customers – and he would work on the trucks,” he says. “Then we got to a point where we could hire more technicians.”

Today, Outlaw Diesel Performance has seven full-time employees and 15,000 sq.-ft. of space in two buildings. The shop will work on just about any domestic, light-duty diesel engine, and can build a full-blown race truck as well as do regular service and repair work.

“We cater to anything from mild to wild,” Roberson says. “We will build just about any engine, but the main engines we build in-house are the 6.0L, 6.4L and 6.7L Powerstrokes. We assemble those in-house. We do mainly drag racing applications, which is an uphill battle getting Powerstrokes into the drag racing world. We are one of the few shops out there week in and week out at the tracks with our Powerstrokes. We have a 6.7L and a 6.4L that we race.”

While Outlaw Diesel can accommodate many different jobs, the shop’s machine work is done locally by Nyes Machine Shop.

“We don’t do any machine work in-house, but we do work with the industry’s best,” he says. “Nyes Machine Shop in Muncie, IN helps set us apart from a lot of other local shops. They can do full, custom CNC porting on cylinder heads, they do o-rings and they machine blocks. On the 6.7L Powerstroke, Nyes does all the pinned rod and main bearings in those, which have been a big issue with building power and turning rpms with the factory bearings in those trucks. Nyes has really helped us grow.”

Speaking of the 6.7L Powerstroke, Roberson says that’s one platform he’d like Outlaw Diesel Performance to start doing more with. After all, the engine is in his race truck, and a better set of rods and a few other upgrades allows the 6.7L to produce some really good power. And that’s just what John decided to do!

Roberson had been racing in the 7.70 1/8th-mile class with his 6.7L. However, after the addition of the S467 turbo, the engine decided to let go. It S-shaped a couple of the connecting rods, and bent every single one of them. Luckily, nothing else broke, so Outlaw Diesel had a good base to work off of after that.

“Stock, these engines have a few other components that are known for failure, which we wanted to address while we were in there,” Roberson says. “One was getting good oil supply to the bearings, which was fixed through an H&S oil pressure regulator. Their regulator keeps constant oil pressure under all rpm scenarios.

“A second issue is spinning rod and main bearings. We drill a hole in all the main and rod caps and put a brass pin in there. We do it on the rod side because there is more surface material than the cap itself. Then, you drill a hole in the bearings to keep the bearing from spinning. Ford doesn’t install any tangs or tabs for when you put a bearing in to help lock them in place, so they’re free floating in there and it’s very easy for them to spin. Sometimes it’s installation error, but a lot of times it’s because there’s nothing for them to grab and they spin.”

Even after bending the connecting rods and running at 650+ hp for a whole race season on an engine with 160,000 miles, the bore of the 6.7 was still good. Outlaw Diesel decided to leave the engine at its 3.900˝ standard bore and simply honed the block.

“We used ARP bolts throughout and retained the factory pistons, just cutting .060˝ over valve reliefs on the intake and exhaust,” Roberson says. “We also used new rings from Ford, which was under recommendation from Midwest Diesel. We went with Wagler connecting rods, which are pretty much the best option for price and strength. We used a River City Stage 3 camshaft, which delivers better lift and more power up top – we want the truck to stay above 4,200 rpm while going down the track and shifting. The cam has 190/211 duration at .450˝ lift.”

The crankgear on the 6.7L engines are known to spin the gear and put the engine out of time. So Outlaw Diesel TIG-welded the crankgear so it can’t spin. The shop also used Midwest Diesel valve springs and pushrods, a new Ford rocker assembly and front cover, which has a new low-pressure oil pump and a new water pump.

“We also replaced the cylinder heads because they’re known for having issues dropping valves on the 11s and 12s,” he says. “We decided to go with brand new Ford casting cylinder heads that have been o-ringed to prevent head gasket failures. We used S&S Motorsports 200% over injectors. It’s more fuel than what we need since we are now racing the 6.70 index class, but I didn’t want to have to buy injectors twice, so we just dialed it back. There’s still plenty of fuel for that class.”

With the final assembly of this 6.7L Powerstroke done by Outlaw Diesel Performance technician Daniel Ogden, the engine is now churning out 1,100 horsepower, and getting the 6,000-lb. truck down the drag strip in the 6.70 1/8th-mile class!