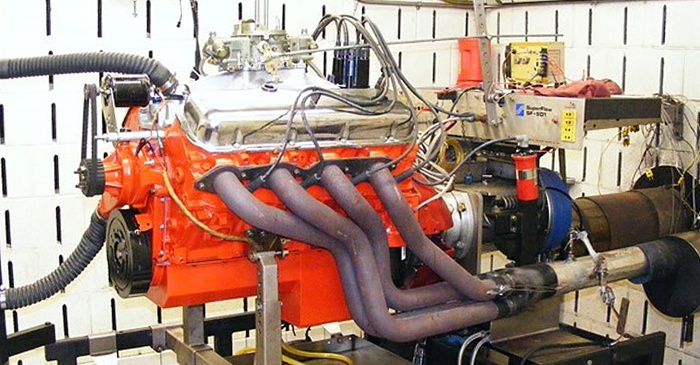 There are many aspects of the famous and desired muscle car engines of the 1960s and ‘70s. They have become the holy grail of factory performance engines, but they are getting more and more scarce as the years go by. For car owners, the engines have evolved in recent years into three different configurations. Read on to learn more. 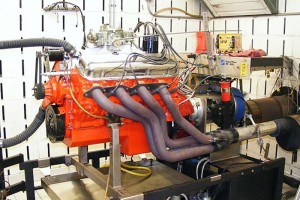 The goal of this effort was to create a stock appearing ‘67 L78 396-375
engine. Boring and stroking actually resulted in 496 displacement. The
engine made 534 horses and 546 pound-feet of torque. This was achieved with factory heads and intake.

There are many aspects of the famous and desired muscle car engines of the 1960s and ‘70s. They have become the holy grail of factory performance engines, but they are getting more and more scarce as the years go by.

For car owners, the engines have evolved in recent years into three different configurations. First, of course, is the totally original, untouched engine with minimal miles. On the exterior, the engines retain their absolute stock appearance. If a part or piece needs replacement, every effort will be made to replace it with the right item.

On the other end of the spectrum, there is the complete upgrade of the engine. It doesn’t matter that the mill loses its external identity. Additions such as headers, aftermarket heads, carburetors replaced with fuel injection or even superchargers, along with other internal modifications are common. ‘Full Race’ would be an appropriate description of this modification.

But there is yet one more deviation – this variation is somewhere between the previous two configurations and could be described as a power upgrade while retaining the stock external appearance. But there is also the desire to have greater performance from the engine, which relegates all the power upgrades to be internal.

Why are customers looking for this? First of all, the car can continue to be displayed in large national shows without getting any penalty when the hood is raised. The extra power is realized in the form of over bores, stroker kits, modern cams and cranks, ported stock heads, jetted carbs and other upgrades. One aspect that is agreed upon by most builders doing this type of modification is the acquiring of improved drivability. Another advantage of using lighter replacement parts reduces the rotating weight of the engine. 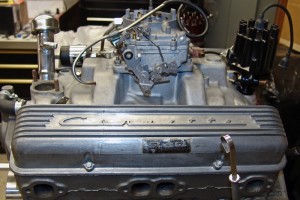 This stock-appearing ‘63 Vette 327 engine has received a ton of
upgrades to greatly increase its
horsepower. Bob Kammer
explained that it has forged pistons, moly Rings, a healthy aftermarket cam with solid lifters, a three-angle valve job, and
electronic ignition.

And who’s to say that some guys might not have a nitrous bottle hidden somewhere in the trunk! These modifications may allow some owners to play a little mind game, excelling at the stoplight or Christmas Tree with their “stock” engines.

A meeting was recently held with three engine builders to discuss this niche engine building activity. Each is an expert on a particular brand of American muscle and each offers a unique perspective on the opportunities presented to other engine builders across the country.

President of Kammer and Kammer, Huber Heights, OH, this guy lives Mopar and is one of the best engine builders of the breed. He has produced a number of these stock-appearing engines. Bob explained that one of the unseen upgrades can be made by matching the intake and exhaust ports.

Kammer believes one of his strengths is his ability to select the right hydraulic roller cams. In fact, he tells his customers if they don’t follow his cam recommendation there is no warranty on his engine. Also, for upgrading these old muscle car engines, he recommends the use of bronze guide liners in the heads. Here are some of his pumped-up stock-external engines.

Engine Build Number 1 – This is a ‘67 426 Hemi engine that came from a Plymouth GTX with a factory rating of 425 horsepower. Bob now figures that with the invisible changes he made it now has about 500 hp. Of course, it has a hydraulic roller cam, a moly ring combo, along with stronger springs, retainers and keepers, forged pistons, performance fasteners throughout, including the rod bolts. Also, there are stainless steel valves, port matching with the heads and gaskets, match/cut under the valve seats, and a lighter rotating assembly. Outside it looks perfectly stock. 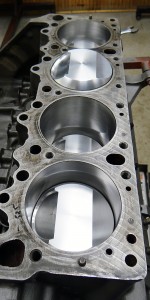 Engine Build Number 2 – “A customer with a 1967 427 Corvette engine wanted quite a bit more horsepower than he already had, maybe to be undefeated at the stoplight,” Kammer says. “I bored and stroked it up to 500 cubic inches to get a 9.95-1 compression ratio. It’s got new aftermarket forged pistons, I-Beam Rods, a hydraulic roller cam and roller rockers. It makes about 600 horsepower and the same number of pound-feet of torque.”

Engine Build Number 3 – An interesting engine was this muscular early 1960s Chrysler 413 mill with inline four-barrel AFB carbs. It sported a 10-1 compression ratio and 375 horsepower. For this upgrade the compression was lowered to 9.3-1 and the block was bored out a more-than-usual .060 over because it was worn out. Also added were aftermarket pistons and moly piston rings. Finally, there was a small cam with no lope and a three-angle valve job, all of which helped provide some hidden horsepower.

Before undertaking an upgrade of this type, Gregg explained that he always does a complete teardown before committing to any work. “I’m looking for things like spun bearings and I’m a big advocate of the hydraulic roller cam,” he says. “Even though the purpose is to upgrade these old muscle car engines, I really appreciate what the original builders did back in the day.”

Montgomery says that the weak link in these vintage Ford engines is the valve train.

Engine Build Number 1 – The first engine we are addressing is this stock-appearing ‘68 GT500 Shelby 428 engine. Gregg explained the considerable internal updates raised its stock 335 horsepower to a dyno-tested 500-plus. First of all, it was bored and stroked to 450-plus cubic inches in addition to using performance pistons and I-beam Rods. There is also a mild stroker crank and a hydraulic roller cam. The stock carburetor was retained.

Engine Build Number 2 – There is an interesting story about this stock-appearing Boss 302 engine. Gregg explained that the customer had an authentic Boss 302 that he wanted to preserve and wanted Gregg to produce an exact duplicate externally, which he did. “But internally, that is certainly not the case, loaded with lots of good stuff,” Gregg says. “It far exceeds the stock horsepower of 290, like up to 400+hp. First of all, it was bored and stroked out to 347cid and carries new pistons and connecting rods. There is also a hydraulic roller cam and roller rockers.” 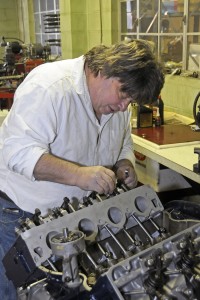 Engine Build Number 3 – The Boss 429 engine is one of Gregg’s favorite engines and the engine that his dad built to great success starting in 1969 and used on his way to winning multiple national titles. He indicated that over the years he and his dad had worked on dozens of them, improving them most of the time while maintaining the stock external appearance. “Sometimes these engines are over bored by as much as .080” along with using hydraulic roller cams, but often using the stock heads and intakes,” says Montgomery. “However, aftermarket pistons and rods were used and horsepower was substantially increased.”

An easy way to make more horsepower is to improve airflow through the entire induction system and fine-tune the fuel curve to more precisely match the engine’s need. I have found increases over 50 horsepower with relatively simple refinements. OEM carburetor calibration is typically well sorted for a stock engine, but there is usually room for improvement. However, the further the engine deviates from stock, the more critical the fuel/air calibration needs to be. Make it too lean and you can burn up the engine. Make it too rich and you can wash out the rings. Here are several of his stock exterior project engines.

Engine Build Number 1 – This engine started life with a 454 Chevy block which was bored and stroked out to 496 cubic inches. The goal was to have the engine resembling a 1967 L78 396/375 Chevy big block. In its initial configuration it made 534 horsepower at 6000 rpm and 546 pound-feet of torque at 4000 rpm. With a few subsequent revisions, those figures climbed to 614 horsepower at 6000 rpm and 610 pound-feet or torque at 4000 rpm. Note that this was achieved with unmodified factory cylinder heads and a factory aluminum intake.

Engine Build Number 2 – This is the real-deal ‘69 396/375 Chevy. It is totally correct appearance-wise under the hood with just a slight increase in compression from 11-1 to 11.4-1. aHe also did mild porting and polishing work on the heads and intake and installed a set of custom aftermarket pistons and a boutique cam. In this configuration, the engine poured out 462 horsepower at 6100 rpm and 439 pound-feet of torque at 4700 rpm through headers. Removing the headers and installing OEM iron exhaust manifolds resulted in 431 horsepower at 6100 rpm and 411 pound-feet at 4700 rpm. 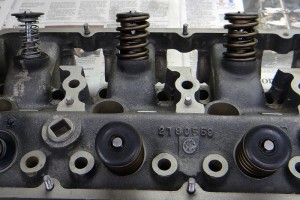 Engine Build Number 3 – This engine is a 1969 Z-28 302 Cross-Ram V8. The engine looks quite stock on the exterior, but its had some refinements internally. In search of better street manners, but without sacrificing any of the 302’s legendary performance, the OEM 30-30 cam was replaced by a more-modern solid flat tappet grind. From its stock 290 horsepower factory rating, the addition of the cross-ram intake system and a more modern camshaft profile upped that figure to 377 horses at 6000 rpm and the torque jumped from 290 pound-feet at 4100 rpm to over 360 pound-feet at the same rpm. Interested in making muscle car upgrades part of your marketing plan for 2015? You’re probably already doing similar builds and don’t even realize you’re doing anything special. But keeping America’s historic muscle cars running strong is a great way to look backward and forward at the same time.

Have you done any creative or special engine builds? Send us pictures and a brief write up of the build and the process you followed. And if you have video of your creation in operation, we’d love to see it. Send photos, video to Engine Builder’s Managing Editor Greg Jones ([email protected]) and you may find your artwork on the Engine Builder website! 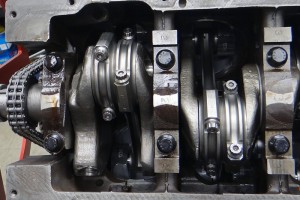 Other work on Kammer’s 426 Hemi included stronger springs, retainers and keepers(left photo). The use of I-Beam rods and a magnafluxed and turned crank bring more power to the table (right photo) 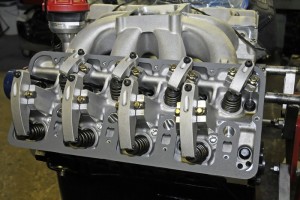 The top end of the Boss 429 is one place Montgomery looks for more performance. 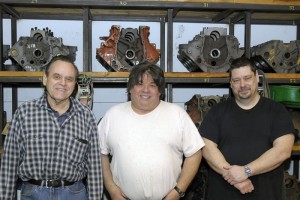 The Dayton, Ohio area is certainly endowed with a number of outstanding engine builders. Here are the three that contributed to this article, (L-R) Bob Kammer, Gregg Montgomery and Eric Jackson.

Advertisement
In this article:horsepower, Muscle Cars

GM 604 Crate Engine
Connect with us