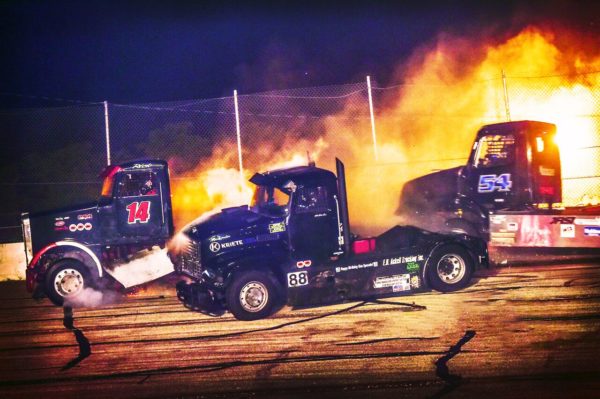 Across much of the highway system of the U.S., heavy trucks race almost non-stop to their next destination. Actually, because of DOT regulations and self-enacted restrictions from nearly every fleet operation, those trucks are more likely to be driven safely and efficiently. 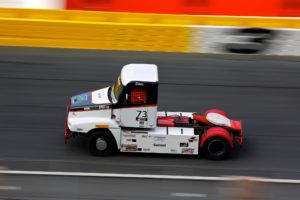 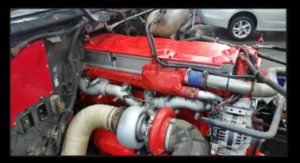 NASCAR race inspired technology is used on the track and on engines built by Race City Truck for over the road trucking companies. Performance is in the eye of the beholder.

On several race tracks across the United States, though, diesel tractors with C12 and C15 Caterpillar, Detroit Diesel Series 60 and other popular engines are competing at top speed for prized dollars in the Bandit Big Rig Racing Series – and they’re proving that “big block” race engines are not only profitable to gas engine builders, but to diesel experts as well.

According to the series rules, trucks competing in the Bandit Big Rig Series must have been mass-produced Class 7 or 8 cab and chassis tractors originally commercially available for purchase in the U.S. or Canada for street and highway use. Single steer and single drive axles are required and rules say all trucks must start each race with six tires attached – rules don’t specify how many must be left at the end.

The engines and transmissions must be located within four inches of the stock location – major setbacks and relocations are prohibited. However, the engines do not have to be original to the tractor – engines of a different model year than the truck chassis are allowed, as long as it was available from an OEM for commercial highway use in a truck released in the U.S. or Canada.

All engines are limited to a single-stage turbocharger with a maximum air inlet of 80 mm – larger inlets will require restrictor plates. The truck must also maintain a wet sump oiling system, though fuel and oil coolers are permitted.

Camshafts must remain OEM and available over the counter from OEM suppliers – no custom ground cams are permitted.

Of course, racing rules being what they are, there are many things that AREN’T strictly forbidden, so participating engine builders have found other ways to increase the competitiveness of their trucks.

Jared Smith, shop manager for Kruckeberg Motorsports, says the four trucks in the KMS shop all use Detroit Series 60 engines. “Some of the engines were native to the truck they’re in now – but many of them have come from salvage vehicles. It’s a pretty reasonable sport, relatively speaking, but compared to the modifieds and sprint car racers who travel all over the country for $750 to $1,000 prizes using $30,000 engines, it’s a great series. Plus, it’s $10,000 to win, every single race.” 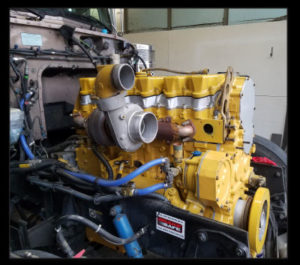 Smith says the Bandit Series grew out of the now defunct Champ Truck Series that competed a few years ago in a road course format. Another team owner, Allen Boles, of Jupiter Motorsports, says circle track seemed to be more appealing to teams and audiences.

Craig Kruckeberg, owner of Minimizer, a manufacturer of flexible fenders for trucks, says the trucking industry is at a crossroads, and he hopes the Bandit Series can do something to build excitement for the industry.

“Right now it’s about 100,000 to 125,000 drivers short and a similar amount of diesel mechanics short,” Kruckeberg, said in an interview with Twin Cities Business, a Minnesota businesss publication. “For my grandkids to someday have truck drivers to sell to, something has got to happen.”

To attract racing teams from around the country, Minimizer put up a $600,000 purse (nearly $50,000 per race in awards) and allocated half a million of its marketing budget. The 2018 schedule will consist of at least 12 events and attract up to 24 drivers each. All events are held on asphalt tracks of 3/8ths, 1/2 and 5/8ths mile in length.

Kruckeberg not only produces the events, he competes in them – but he’s certainly not alone.

Boles’ team has four trucks for its own use, using Cat C12 and C15 power. In addition, he says he builds trucks for other teams. Among the tweaks he, Smith and other teams employ include trying to wring a few more rpms. 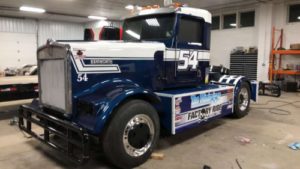 Tyler “Snowman” Kruckeberg will compete with this brand new Kenworth race truck in the Bandit Big Rig Series in 2018.

“We try to advance the timing, we work on tuning the ECM, and we typically use some marine parts in the engine as well,” Boles says. Specifically, marine injectors are used in place of the engines’ standard diesel injectors. “They’re a little beefier and have a bigger flow and allow us to get more fuel right on top of the piston. We also use a bigger cooling system than road tractors use – we need to be able to cool them down pretty quick. To do so, we beef up the radiator and put coolers on about everything we can – power steering pumps, oil system, even the fuel. The colder the fuel, the more spray you’ll get.”

Smith points out that engines operate on #2 diesel fuel only – nitrous, methanol, propane, ether and water injection are prohibited. “Under no circumstances is a ‘combustible’ other than #2 diesel permitted to be introduced into the intake stream,” the rules clarify.

Managing the fuel flow, Boles says, is critical, and the lift pump and fuel filtration system he uses has made a world of difference. “I couldn’t believe the difference it has made in throttle response, in horsepower and in fuel mileage. We can run more laps and have much better performance. It’s pretty amazing.”

Boles, Smith and Kruckeberg say the modifications they make to their trucks’ engines are the result of an ongoing search for better performance.

“We’re looking for both torque and horsepower,” Boles, explains. “The more the better. Sometimes it’s a fine line – these are single-axle trucks and you don’t want to go spinning around the track but you still want to get that bit of drift too. That’s the benefit of working with the electronic tuners – we can just set it right there and not have to take it back to the shop to work on.” 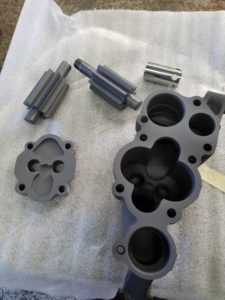 Race engines aren’t the only ones benefitting from today’s coating technology. This oil pump and its components see reduced friction and heat.

Like Kruckeberg and Boles, Rob Decker, Race City Truck and Exodus Diesel Research in Mooresville, NC, was a Champ Truck participant as well, and says the experience helped him develop many of the processes he uses in his business today. Though his emphasis has shifted to building his over the road engine operation, Decker, runner up in the 2017 Diesel Engine Builder of the Year competition says the influence of racing and especially NASCAR has been a plus.

“I’ve been doing this for 30 years, and we’ve always been a repair shop, a heavy truck repair shop. Race City Truck and Equipment is mainly heavy trucks and medium-duty –  we dabble in a little bit of light-duty trucks.” Decker says.

“We moved to Mooresville from Upstate New York in ‘06 and when I first moved into town, there was nobody servicing big trucks here at all. Everything had to go to Charlotte. We started working with the race teams in the area on their haulers and motorcoaches and then I started hearing about coatings being used in engines in NASCAR,” he explains. “We wondered if the coatings would work in a big truck engine. The local coatings suppliers down here said it would – the parts are just bigger.”

Decker said the decision to apply performance coatings to heavy-duty parts was something of a leap of faith. “Actually, it was more or less, ‘Let’s try it and keep our fingers crossed’ – we’re dealing with a $20,000 over-the-road engine and the guy’s going to be pretty upset if he breaks down in Tennessee or Texas with it.”

Recognizing a successful experiment, Decker says he soon began looking at ways to incorporate racing surface finishes into his truck engines as well. His methods, however, may seem controversial to some.

“We’re polishing the whole cylinder liner inside and out,” he says. “That means that inside the liner we’re actually polishing out the crosshatch. Period. They’re gone. That’s part of the process that we do to the rings too. We hand break the rings in to match that cylinder surface” 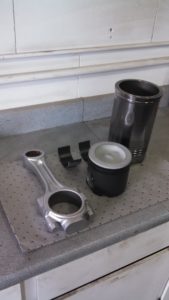 It may be counterintuitive, he says, but a 550-horsepower Caterpillar engine will get better fuel miles than a 350-horse Cat engine because the guy with the 350-horse is going to have his foot to the floor the whole time.

“Walmart proved that in its own testing,” he says. “Walmart bought a lot bigger engines back in the day, Caterpillars and Detroits, and they tuned them all down. They were losing 10, 15 percent fuel mileage, because they found out the drivers were just holding them right to the rug because they didn’t have the power. They raised power levels up, guys were a little easier on them, the fuel mileage came up.”

“Now we’ve got all these crankshafts – they’re big and heavy. You’re taking out that vibration, even at 2,400 rpm, which is the maximum on a lot of these designs, some go to 3,000 rpm in the race truck engines and any little bit helps. When you’re weighing the rotating assemblies, the parts are so heavy that being off 40, 50 grams is a big deal,” he says.

Decker says the goal of his typical customer isn’t pure horsepower He’s not looking for big horsepower numbers, but he’s almost guaranteed one more mile per gallon out of the box. “He came in at 5 1/2, his first trip should be 6-1/2. That’s a big savings. Now we’ve lowered the temperature, lowered the friction in the engine, which in theory should make it last longer because you’re getting rid of vibrations and heat and all that good stuff. That’s the direction we went,” he says.

Decker says he is blessed with a great number of qualified machine shops near his current location, so his team outsources much of the machining needs.

“We have a machine shop that we use exclusively for our big truck engines. They do all of our blocks and heads. Then locally we have the guys that balance the cranks for us. I can do the rods and pistons myself here, but the cranks are done at a machine shop with real bob weights and all that stuff.”

Decker anticipates bringing more processes in-house soon, as he is completing the construction of a big new shop right in the middle of the NASCAR race teams. Having the ability to continually  incorporate those racing techniques will make his over-the-road customers even more successful.

“Again, the smoother the engine, the acceleration is smoother, the vibrations are down – our major goal was to increase mileage and longevity of that engine. If we can get an engine that is completely balanced – low friction, less heat – then we can gain a mile per gallon. That’s typically what we see – and that’s a big deal.”