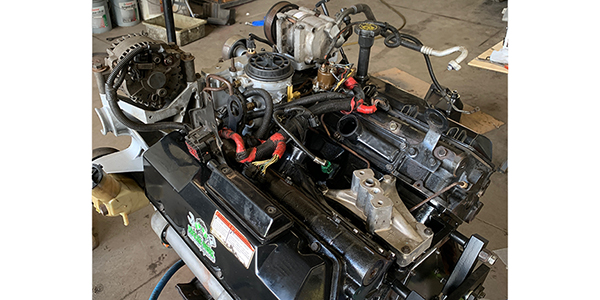 A little more than three years ago, Justin Zeigler was the USA-East points leader for the 2.5 Diesel Class in sled pulling. Having reached the peak in that class, Zeigler was getting more and more attention. Enough so that he even received a call from a man in upstate Michigan.

“A guy from upstate Michigan called me and said, ‘Hey, I want to buy your truck,’” Zeigler says. “We settled on a price and he paid cash for the truck. I went full-time the next day.”

Justin turned his profits from selling his pulling truck into what is now his 7,000 sq.-ft. diesel shop, Zeigler Diesel Performance in Canton, OH. The shop employs four full-time and two part-time team members, plus Justin and his wife Jennifer, who helps the shop with scheduling, billing and customer service. However, long before Zeigler Diesel Performance was even a thought, Justin had been learning tricks of the trade at a young age.

From there, Justin got an apprenticeship at Aim Nationalease working on heavy trucks, and went on to graduate at the top of his apprenticeship class, and did so as the youngest apprentice in the program.

“After that, I went through a couple shops, which expanded my knowledge,” he says. “Then I started building my own pulling truck. I was doing really well with it and that grew into working on my buddy’s trucks and then their buddies’ trucks and it kept growing. It grew from working out of my little 25´x25´ garage at my house as a side job to being so busy with side work that I really couldn’t justify going to my full-time job every day.”

As the story goes, Justin sold his pulling truck and used the money to go full-time on his own, opening Zeigler Diesel Performance (ZDP) three years ago. The shop works on everything diesel related from basic maintenance all the way to full, high-performance builds.

“We do it all,” Zeigler says. “We work on a ton of pickups. We do a lot of diesel truck pull stuff as well as diesel drag racing.”

While the shop has many in-house capabilities, ZDP utilizes outside machine shops for machining work on both stock and performance builds. Having built-up a great reputation in just a few years, ZDP recently received work from a new customer with a Ford Powerstroke.

“This customer had called around and couldn’t find anybody who was willing to rebuild his engine for him,” Zeigler says. “Then, he came across us.”

The customer had a 400,000-mile 7.3L Powerstroke engine in need of a rebuild. According to Zeigler, the engine had excessive blow by.

“He wanted to do a rebuild on it and turn up the power a little bit,” he says. “He’s pretty much put a whole new body on this truck, and the truck is worth putting the money into, so we rebuilt the engine for him.”

After tearing the engine apart, ZDP could see that cylinder five was gauged up pretty bad.

“It actually mounted the lower ring land on the piston and really chewed up the cylinder wall,” he says. “That’s where all the blow by was coming from. Believe it or not, the rest of the engine looked great. There was a little bit of cylinder glazing, but nothing crazy.”

From there, ZDP had the cylinders bored .010˝ over and the engine got a full factory Ford rebuild kit direct from Ford. Zeigler swapped out the cam with a Stage 2 Colt cam and put everything together with ARP head studs.

“As far as the engine goes, it didn’t really need extensive machine work,” he says. “Everything was pretty decent, especially for a 400,000-mile motor.”

The shop did put in BD Diesel’s manifold, up pipes and a turbo set up for more power that the customer was looking for, but the build was never intended to make world-changing power.

“This 7.3L Powerstroke is going to be a solid 400-450 horsepower at the tire and should be well over 1,000 ft.-lbs. of torque,” Zeigler says. “The engine should now run good, pull a trailer good and do everything it needs to do. This 7.3 is going in a full-on work truck, so it’s going to get used and abused.”