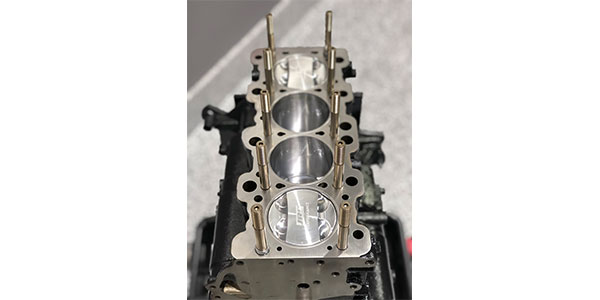 According to ARP’s Chris Raschke, engine builders need to make sure to have the correct fastener for the application first. “When you get a new fastener, you need to take it out of the package, inspect the fastener, make sure there’s nothing wrong with it.

Back in 2003, Engine Builder talked to the late Carrol Smith, who at the time was a consultant for ARP and was widely known as the guru of fasteners. He quite literally wrote the book on the subject in his no-nonsense style in “Nuts, Bolts, Fasteners and Plumbing” that engineering students and race technicians have used as their Bible of bolted joints.

Smith, who passed away a few months after we interviewed him, told us that the biggest problem with sealing the cylinder head was getting the right amount of preload on the head studs. “You have to have very clean threads,” he asserted.

Preload is indeed a big issue and one that ARP hasn’t taken lightly. The California-based fastener company says it has tested just about every kind of lubricant, including Detroit Diesel’s “peanut butter” and determined that none of it was consistent enough for performance and racing applications where cylinder lift pressures are much higher.

According to ARP’s Chris Raschke, engine builders need to make sure to have the correct fastener for the application first. “When you get a new fastener, you need to take it out of the package, inspect the fastener, make sure there’s nothing wrong with it. Maybe we screwed something up, or it got damaged in shipping?”

Raschke says you should always look for any inclusions or irregularities that may have resulted in the manufacturing or shipping process. He also says as long as ARP bolts and are in good condition, they can be reused because they are not torque-to-yield (TTY).

“If you’re reusing our fasteners and know the history of it, then it can be reused if it is in good condition,” says Raschke. Once you inspect the threads – and it’s never been improperly installed, the threads are in good shape, the wrenching is in good shape, and there’s no corrosion – then the faster should be reusable. Our recommended torque is anywhere between 75% and 80% of the yield, so we are not going beyond the elasticity range.”

To get to the proper stretch or proof load, engine builders should use a quality lubricant that provides consistent results. Torque wrenches must be calibrated often and use the stretch gauge for rod bolts to ensure the correct clamp load is applied. But first, you will need to choose the right fastener for the application.

ARP fasteners come in a wide assortment of materials ranging from stainless steel and 8740 chrome moly to more exotic alloys. There are grades within specific alloys – such as 8740 – available in four grades: SDF (seamless and defect-free), CHQ (cold head quality), Aircraft and Commercial.

“Stainless 300” is an alloy for extra durability. It’s polished using ARP’s proprietary process to produce a beautiful finish. Tensile strength is rated at 170,000 psi. Stainless Steel is ideally suited for many automotive and marine applications because it of its tolerance to heat and is impervious to rust and corrosion.

Until the development of more modern alloys, chrome moly was considered a high strength material. 8740 chrome moly is a tough steel, with moderate fatigue strength. Chrome moly is typically classified as a quench and temper steel that can be heat-treated to produce tensile strengths between 180,000 and 210,000 psi.

ARP2000 is an alloy steel that is heat-treated to produce a greater strength material than 8740. With similar characteristics as 8740, ARP2000 can achieve a clamp load of 220,000 psi. ARP2000 is used in short track and drag racing applications as a step up from 8740 for steel and aluminum rods. Stress corrosion and hydrogen embrittlement are not a problem if care is taken during installation.

L19 is a higher strength material compared to 8740 and ARP2000, and is capable of delivering a clamp load of 260,000 psi. According to ARP, it is primarily used in short track and drag racing applications where inertia loads exceed the clamping capability of ARP2000. Like most high strength, quench and temper steels – L19 requires special care during manufacturing to avoid hydrogen embrittlement. This material is easily contaminated and subject to stress corrosion. It must be kept well-oiled and not exposed to moisture.

With a tensile strength of 290,000-310,000 psi, Aermet is a martensitic superalloy that is stronger and less expensive than many other superalloy materials. Because it is capable of achieving incredibly high clamping loads, it is ideal for short but extreme environments such as Top Fuel, Funny Car and some short track applications. Although Aermet is a maraging steel that is far superior to other high-strength steels in its resistance to stress corrosion, it must be kept well-oiled and not exposed to moisture.

Inconel 718 is a nickel-based material that is in the high temperature, superalloy class. It is found to be equally suitable in lower temperature applications. This material delivers tensile strengths in the 210,000-230,000 psi range and exhibits improved fatigue properties. Best of all, Inconel 718 is completely immune to hydrogen embrittlement and corrosion.

ARP3.5 (aka AMS5844, MP35N) is an age-hardened superalloy used in applications where heat and stress can attack component durability. The high cobalt content of this alloy delivers a material with excellent fatigue characteristics and tensile strength between 260,000-280,000 psi, but it is expensive. For racing applications, these materials are primarily used in connecting rods where extremely high loads, high rpm and endurance are important factors.

Custom Age 625+ is another superalloy with excellent fatigue life, tensile strength and toughness. It also has complete resistance to atmospheric corrosion and oxidation. According to Raschke, ARP was the first to develop manufacturing and testing processes for fasteners with Custom Age 625+ more than 20 years ago. Its high strength and lower cost make it an ideal alloy with a tensile strength between 260,000-280,000 psi.

Finally, titanium has many great properties too, but is mostly used to reduce weight. It is one of the most expensive materials and has been banned from Formula 1 and other racing classes due to costs. But, if you need something custom made, ARP offers special order fasteners made of Ti6Al-4V. It is specially heat-treated and provides excellent strength compared to other titanium alloys. The material has a nominal tensile strength of 180,000 psi and is corrosion resistant. It is about 40% lighter than a comparable fastener made of steel. Head studs and accessory bolts are ideal applications for this lightweight material.

As we scrolled through some engine forums for research, we found one engine builder who said when he bought a stretch gauge, he was so disturbed at the results compared to his trusty torque wrench that he ended up on the phone with ARP to make sure he was doing it right. However, ARP assured him that fastener stretch is what you are trying to accomplish no matter which method you use. It establishes the clamping load that allows the fastener to function, a stretch gauge by-passes the friction variables that affect torque wrench readings, making it inherently more accurate.

“The rod bolt is essentially an extremely stiff spring, and we rely on the elasticity of the material to stretch and rebound to maintain the correct clamping load in operation,” says Michael Skeen, technical sales representative at K1 Technologies.

The recommended method for accurately tightening rod bolts is to use the stretch method to preload the bolt. “This is the method recommended regardless of the engine building situation, rod material, or fastener material,” says Skeen. “If the bolt is not stretched enough, there will not be enough clamping force to keep the rod in place. This could lead to a spun bearing or a broken bolt. Alternatively, if the bolt is overstretched beyond the yield strength of the fastener, it is possible that the bolt could fail.”

Using proper tools such as a stretch gauge, connecting rod vise and torque wrench, make a big difference in the durability and performance of any engine build.

Generally, when you torque a head stud, you put a certain amount of stretch on it. The stud will stretch at the smallest diameter of the fastener. If the smallest diameter is the threads, that’s where it will stretch. With an undercut, narrower body, the stretch will occur in the body not the threads. On rod bolts it is common to see them with an undercut. On head studs, you may have an undercut, or you may have an in-between or full-body stud.

Another critical element of the clamp load is reducing the friction enough to get the correct amount of stretch on the stud. Some engine builders use a special lubricant designed for threaded high torque bolts that is referred to as peanut butter because of how it looks. It is better than motor oil or grease because standard lubricants tend to “squeeze” out under high torque pressures of 100+ ft.-lbs. The peanut butter lube is distributed through Detroit Diesel, but we are told you should get the ‘smooth’ not the ‘crunchy.’

Raschke says that it is also known as ‘Detroit Lube’ and is well known in the diesel world and used by many diesel builders. But it has some limitations, which is why Raschke recommends ARP’s Ultra Torque. “The torque value is not going to achieve the same clamp load with the oil as it is with Ultra Lube, peanut butter or extreme pressure moly lube.”

According to Fred McMann and Tinsley Fehnel, metallurgists for Carpenter Technology Corporation, which provides the raw materials to top aerospace and racing fastener manufacturers, the latest automotive trends are compelling engineers and designers to reevaluate the materials they use for critical components. McMann and Fehnel write, “Specialty alloys with greater strength and heat resistance are needed for more efficient, hotter-running engines. Metals with superior corrosion resistance are needed for harsh oxidizing liquids, alternative fuels and emission control systems. Special electrical and magnetic metals are essential for sensors, solenoids, computers and controls. New technological advances such as camless valve trains, continuous variable transmissions and 42-volt electrical systems will place increasing demands on sophisticated alloys.”

Looking at long term trends such as increased use of lightweight materials like magnesium and aluminum, some fastener experts say in the future the interaction between the fastener and the component won’t only be physical, but chemical.

ARP’s Bob Florine says the biggest challenge for engine builders today is eliminating the “preload scatter” that occurs due to the condition of the threads, the spot face of the surface being clamped, the type of lubricant used, and the accuracy of the torque wrench itself.

Florine says ARP offered racers free torque wrench testing at NHRA national events and discovered a large percentage of the torque wrenches tested were inaccurate – some by as much as 30 percent. It’s good practice to have torque wrenches calibrated periodically. They should always be handled with gloves, as they are delicate instruments and should never be tossed around or used as a breaker bar to loosen fasteners.

Ordinary taps should not be employed to clean up the threads, according to Florine, as they’ll likely cut into the thread and affect engagement. Instead, use special “chaser” taps that are designed for the task.

In Carrol Smith’s final words to us in his 2003 interview, he said, “It’s a question of knowing a little bit about fasteners. You don’t need to know metallurgy (although it helps). But you need to know the facts to get the most consistent clamp loads.” We concur.

Advertisement
In this article:Brendan Baker, Fastener