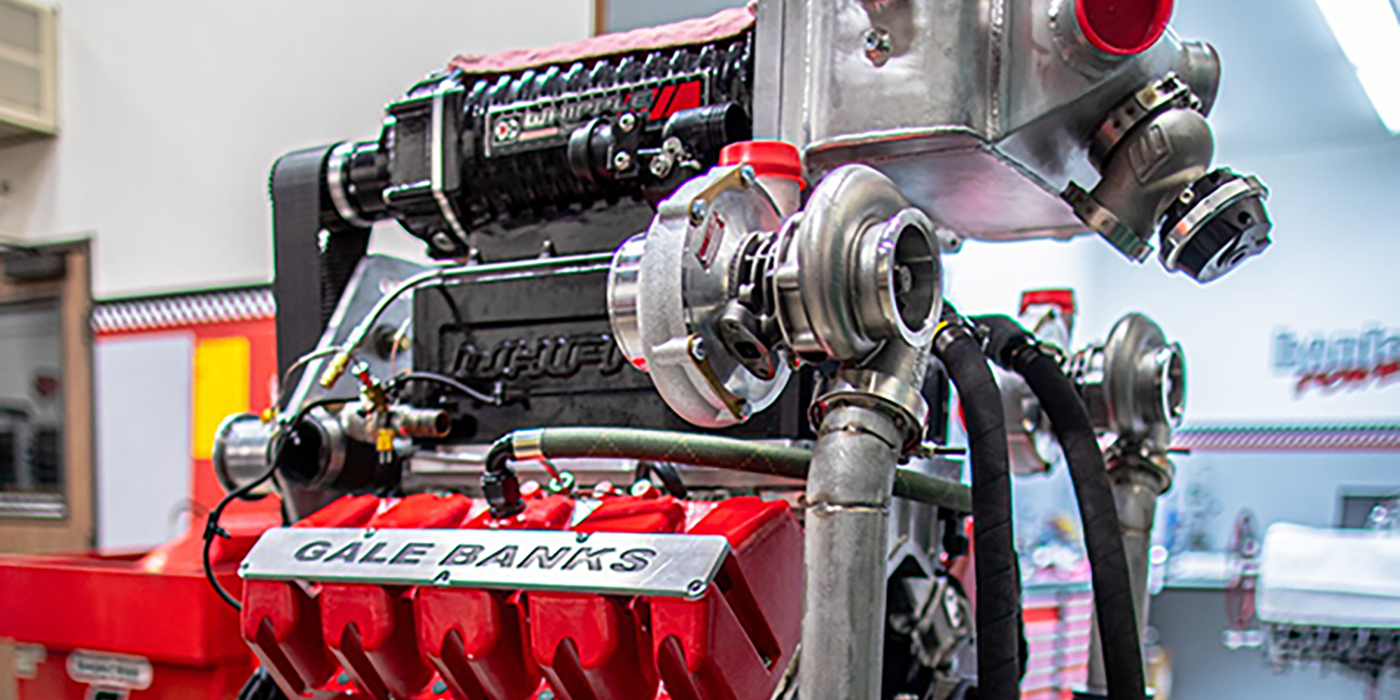 Gale Banks and his team have been hard at work building a diesel equivalent monster truck engine that delivers horsepower and throttle response as good or better than Monster Jam’s current 540 cid big block Chevy blown alcohol engines. Find out what their supercharged twin-turbo 427 cid 7.1L Duramax is capable of.

Gale Banks is an engineer, engine builder, designer and manufacturer who needs no introduction – but we’ll give it our best shot anyway. Gale Banks began reaching engineering milestones more than 60 years ago, when at the age of 14, he tore down his mother’s ’31 Ford Model A engine and managed to increase power by 65 horsepower. Two years later, in 1958, Gale was officially in the engine business.

He began in Lynwood, CA before coming to San Gabriel. Today, he remains the hands-on president of Banks Power – a manufacturing and engineering complex that occupies 12 acres in Azusa, CA.

Banks Power has been at the forefront of designing and manufacturing power-enhancing products for diesel- and gas-powered vehicles since the 1960s. His engines have continuously broken new ground and have set world records thanks to Gale’s engine and engineering prowess, which covers engine architecture, turbocharger design and application, fuel systems, exhaust systems, ignitions, camshafts, intercooling, and much more.

In a quote on the Banks Power website, Gale says, “I’m a futurist. My entire career has been about what’s next.”

Something both Gale Banks and our team here at Engine Builder magazine have been focused on recently are monster truck engines. Gale and his team have been hard at work in 2019 and so far in 2020, building a diesel equivalent monster truck engine that delivers horsepower and throttle response as good or better than Monster Jam’s current 540 cid big block Chevy blown alcohol engines. The build has been documented in a series on the Banks Power YouTube channel.

“The basic engine in a Monster truck is a 540 cid big block Chevy running an 8-71 blower,” Banks says. “Power numbers are around 1,200 horsepower, which is pretty stout for something you just abuse the hell out of. This isn’t a drag race set up, but there are some pretty long, wide open throttle events.

“Monster Jam is worldwide. It’s really unbelievable. While it’s a show, the development of these vehicles astounds me. If you see the aerobatics these guys do – and by that I mean it’s like an airplane – they launch these things.”

To begin to understand what Gale and his team will need to achieve, they rigged up the Monster Mutt monster truck with all sorts of Banks Power gadgets to finger print the engine while it’s in the air and while it’s pulling to measure the g-forces as well as get some idea of the dynamics.

“I got my hands on Monster Mutt and we put sensors on it and our iDash Data Monster on it, and sent it to Monster Jam in San Jose, CA,” Banks says. “Some guys have done these with diesels, but the throttle response is part of the art of driving and operating one of these things, and traditionally, turbo diesels are soft. I want to put a super turbo in one of these, but I want it to work right. I want to know just how the throttle response looks, how the boost air density responds and how quickly the rpm changes.”

Monster truck engines like lbs. of air to mix with lbs. of fuel. What happens when you put a diesel in a monster truck and you don’t have instant manifold air density when you need it? It’s not good.

“We tested the 540 cid BBC blown alcohol engine on the dyno, so we knew what we needed to do with a diesel engine to equal it, or kick it’s ass,” he says. “Engine builds never start with cubic inches or a boost number, they start with a power goal. In this case, mine is 1,400 horsepower. Monster trucks do it at 7,400 rpm. With a diesel, we’re not going to be turning at 7,400 rpm to make that number.

“To make that number, with the air/fuel ratio of alcohol, [big block Chevys] need 137 lbs. of air per minute to make that 1,400 horsepower. So how much manifold air density do I have to produce in the intake manifold to flow that into the cylinder heads to make the power? You also need to know what the temperature of the air is. If you want a lot of density, you want cold air. You also want dry air. Higher humidity reduces the air density. For what we want to achieve, we want a lot of pressure, no temperature and no humidity.”

Manifold air density per cubic foot times the engine’s pumping CFM is what determines the fuel consumption, and fuel determines horsepower. Gale and his team have got to have the right air/fuel ratio and these alcohol motors are at 4.9:1 air/fuel ratio.

Banks Power figured out that with a 540 cid BBC blown alcohol engine at 6,400 rpm, the pistons are displacing 1,000 CFM. Banks wants the horsepower to peak around 7,200 rpm, where the engine displaces 1,125 CFM.

To begin his diesel monster truck engine journey, Banks used a 427 cid 7.1L Duramax engine, which ran a blower to start. Every component got analyzed to ensure it’s the best it can be.

“The 7.1L Duramax has a BDS 10-71 roots blower, Wagler heads and COMP camshaft,” Banks says. “With a diesel, we’re running the blower injecting methanol. We will be looking at the methanol’s ability to cool the engine. The block is an LMM-based cylinder block, but using a 2020 L5P engine oil cooler and running the dry sump oil through it to cool it.”

“We’re turning this blower at 20% over crank, so when our engine is at 5,000 rpm, the blower is at 6,000 rpm,” he says. “Running this way, the temperature of the supercharger was over 400-degrees F. To keep it running cool, we’re going to add in various levels of methanol or water-meth.”

The team used a Banks Power Blend = 50% methanol, 49% water and 1% corrosion inhibitor. The engine doesn’t run on strictly diesel because Banks wants to cool the air coming out of the blower, so they used a 1:1 diesel fuel to water-meth ratio. The team also ran the engine with 100% methanol, but at a lower rate than the water-meth.

Next, Gale and the Banks Power team swapped out the roots blower for a 5.0L Whipple screw supercharger to see what difference it would make.

With the supercharger figured out, the Banks team added a Whipple intercooler, which is liquid coupled. Pushing the water through the intercooler are some billet aluminum Stewart Components EMP pumps.

The increase in horsepower came from a reduction in parasitic horsepower because the blower is now doing a higher mass flow. When Gale matched the air/fuel ratio at 23:1, the horsepower went to 278 hp.

“You can’t predict any of this by using the boost gauge,” Banks says. “The boost actually went down, but horsepower increased. The intercooler also made the engine better on fuel economy. I’m looking for good manifold air density. Manifold air density rules and boost drools.”

“666 horsepower might sound like a good number, and it certainly is if you’re driving on the street,” he says. “It may be a record for a blown 7.1L diesel, I don’t know. But I want twice that amount of horsepower.”

Next, the supercharged Duramax got removed from dyno cell No. 1 and got fitted with the next step in the engine’s evolution – twin turbos and an intermediate intercooler. Twin PT 6870 turbos from Precision Turbo & Engine blow into a Banks fabricated liquid-cooled intercooler stage that has both a Turbosmart Power Gate 60mm wastegate (to control the boost pressure within the intercooler itself) and a Big Bubba blow-off valve (to vent boosted pressure to the atmosphere during shifts and drop-throttle), providing density enriched boosted air that is force-fed to the supercharger inlet. Dual Turbosmart wastegates keep the turbos from over-speeding.

The prior engine set up was supercharged with a set of zoomies on the exhaust side. However, Banks wasn’t happy with the engine’s 666 hp performance. He wants 1,300 horsepower and the same throttle response seen in current 540 cid big block blown alcohol Chevy monster truck engines have.

By overlaying the supercharger with a pair of Precision turbos, the idea is to blow the blower.

“A lot of guys get focused on shoving air and fuel into the engine,” Banks says. “Well, it’s got to get out. The Banks exhaust manifold allows more air back out of the engine. If you don’t scavenge the cylinders to the greatest extent possible, exhaust remains in the cylinders when the intake stroke begins. That compromises everything you’re doing with the compressor, the intercooler, the manifold, the intake ports, the valve size – all that drive is restrained by the cylinder filled percentage. It starts with bigger exhaust valves, better flowing exhaust ports, better flowing exhaust manifold or a set of headers feeding the turbo or turbochargers.”

The L5P got new Banks cast exhaust manifolds, which features larger ports than stock. The 6870 Precision ball bearing turbos have a 4-inch compressor wheel feeding into a 2.5-inch pipe out with a 2.5-inch to 3-inch taper that runs into the charge air cooler, which is water cooled and then the air flows into the supercharger.”

“The supercharger serves to put boost in the engine at idle,” Banks says. “The blower is good to about 22-lbs. of boost pressure.”

Banks engineers are still working hard to get this 7.1L Duramax set up all dialed in. Once they get the final steps figured out, this engine should crank out more than 1,300 horsepower for its intended used – the Diesel Brothers’ BroDozer monster truck.

Turbocharged 6.4L Powerstroke
Connect with us 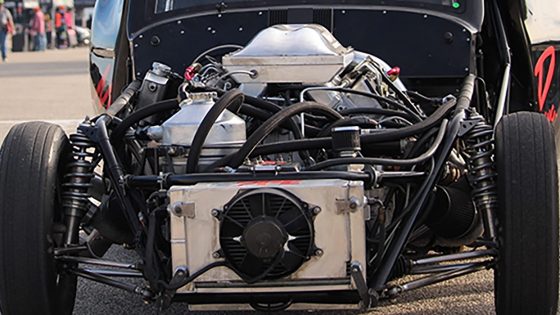 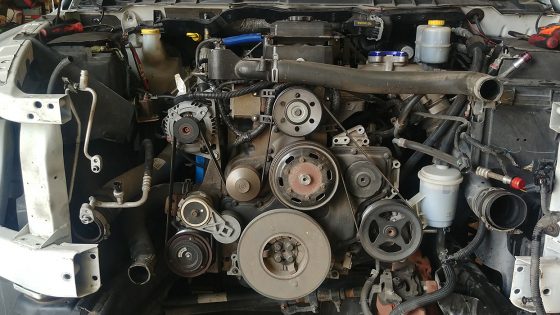