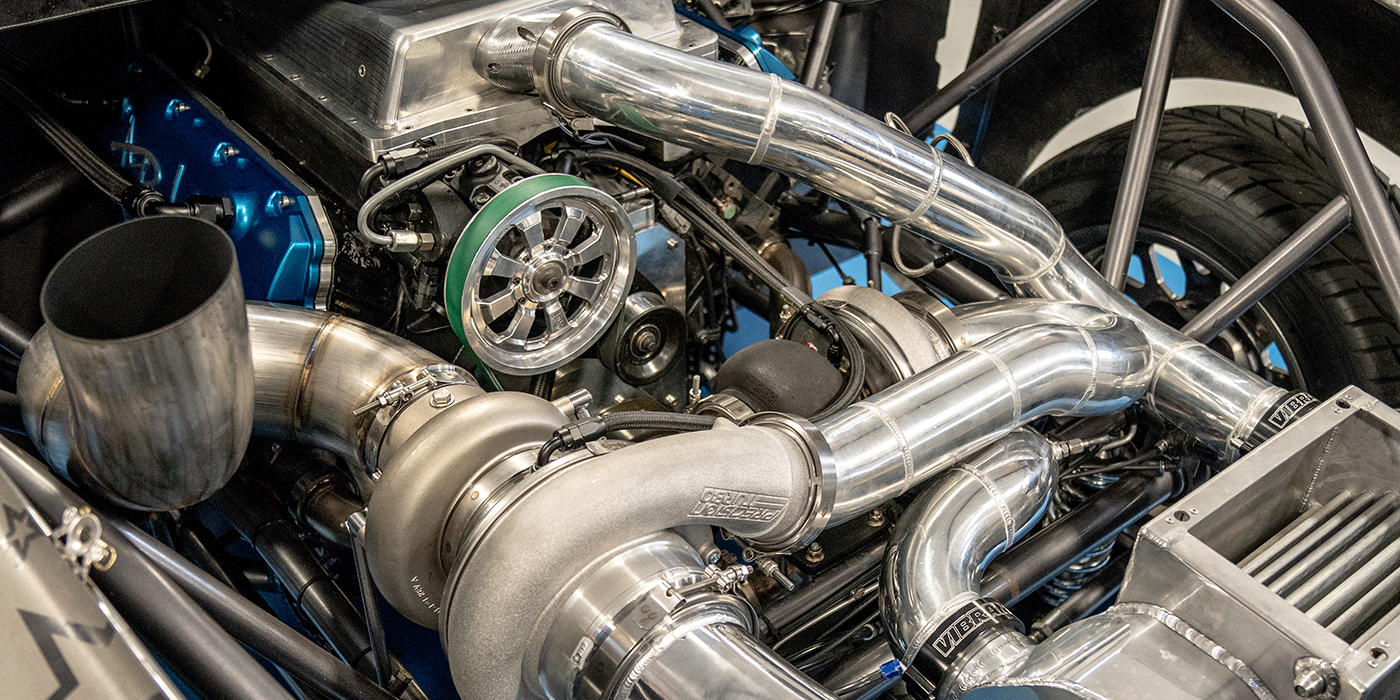 Known for the Powerstroke platform, Rudy’s Diesel Performance has the capabilities to upgrade just about any truck. However, it’s the shop’s own compound turbo Pro Street 6.4L Powerstroke that gets a majority of the attention, and for good reason. Find out what goes into this 2,300+ hp capable diesel engine!

Rudy’s Diesel Performance has grown quite a bit from its humble beginnings roughly 12 years ago, and to say it’s grown a bit is a complete understatement. Rudy’s Diesel Performance started in 2008 as a one-man business with just Aaron Rudolf, the owner and founder, selling parts online out of his basement. From there, the business began to progress into a service shop, which was basically a two-bay, gas station-style shop.

“It was your typical little mom and pop shop,” says Zak Peters, Rudy’s Diesel Performance sales manager. “It had a little office space to it and a two-car garage. It was so small, you couldn’t even shut the garage door if you had a four-door, long-bed truck in there.”

Fortunately for Aaron, after only two years Rudy’s Diesel Performance outgrew that building and moved once again to a four-bay shop. But that space didn’t last long either. Aaron and his crew packed up in 2015 for their current shop set up – a 64,000 sq.-ft. facility in Burlington, NC made up of four buildings and around 30 employees today.

Areas of the business include sales, a 3,000 sq.-ft. showroom, two warehouses, an install department, and a Dynojet all-wheel-drive dyno with a spectator room.

“We’ve finally grown into this place now,” Peters says. “Aaron has the passion and the drive to make it work and he’s definitely done it.”

While Aaron’s passion and drive has certainly grown Rudy’s Diesel Performance (RDP) over the years, the shop has also become known for Powerstroke work and parts.

Aside from parts sales, RDP also does a good deal of 6.0L and 6.4L head jobs, lifts, wheels, tires and stuff of that nature. The engine building the shop does is reserved for RDP’s race trucks and competition trucks.

In fact, the shop has two of its own 6.4L Powerstroke-powered race trucks. While both trucks get their power from a 6.4L Powerstroke diesel engine, that’s pretty much where the similarities end. One is a Pro Mod truck, while the other is a Pro Street truck.

“The Pro Street is the first 6.4L that Aaron ever bought,” Peters says. “It was a single cab, long bed, four-wheel-drive, 6.4L that he bought. That’s the truck he made his name with, if you will, in the performance world. It’s gone through many different variations from what it is now.”

As Aaron built up the 6.4L Powerstroke and his Pro Street truck, he caught the attention of the Ultimate Callout Challenge (UCC). He got invited to compete three years ago and that’s when the Pro Street truck got really serious.

“When UCC came around, Aaron got invited to go out there and compete,” he says. “He got his 6.4L Pro Street Powerstroke truck out of retirement and went through everything. It made 1,987 horsepower on the chassis dyno using triple turbos. Two years ago, we went back to UCC with a different compound turbo setup, a bigger set of injectors and we found a weak link in the fuel system and didn’t have any fuel rail pressure. We didn’t get the number we wanted.

“Ever since that performance, that’s kind of where our focus went. Aaron wants to get back into drag racing with it once we’ve got it all put back together.”

Putting the Pro Street 6.4L Powerstroke back together is one of the shop’s fabricators Nathannial. When this latest build started two years ago, the only thing the shop reused was the Pro Street truck’s cab.

“The truck started off as just your regular, single cab, long bed, four-wheel-drive, 6.4L truck,” he says. “It went from a couple of big compounds and a regular frame back in the day to now a full tubular chassis, full-blown race truck. As a four-wheel-drive truck, it’s a pretty unique set up for sure. It’s a masterpiece. Our fab guy is someone who is very hard to find. He’s very, very particular in his work. If it isn’t perfect, it isn’t going anywhere until it is.”

The full tubular chassis was built in-house at RDP and the 6.4L Powerstroke features a factory filled block, factory Ford cylinder heads that have been o-ringed and ported by RDP’s local machine shop, and a factory crankshaft. From there, the build gets exciting!

“This latest set up is more focused on 1/8th-mile drag racing,” Peters says. “If it needs to be strapped to a dyno, it can do that as well.

“In terms of horsepower, it’s got enough fuel and enough air to make about 2,300-2,400 horsepower. That’s not tested, tried and true yet, because we don’t have the high-pressure fuel pumps on yet. It has big enough injectors and big enough low-pressure pump.”

We’ll be anxious to see what this latest version of the compound turbo Pro Street 6.4L Powerstroke can truly do!