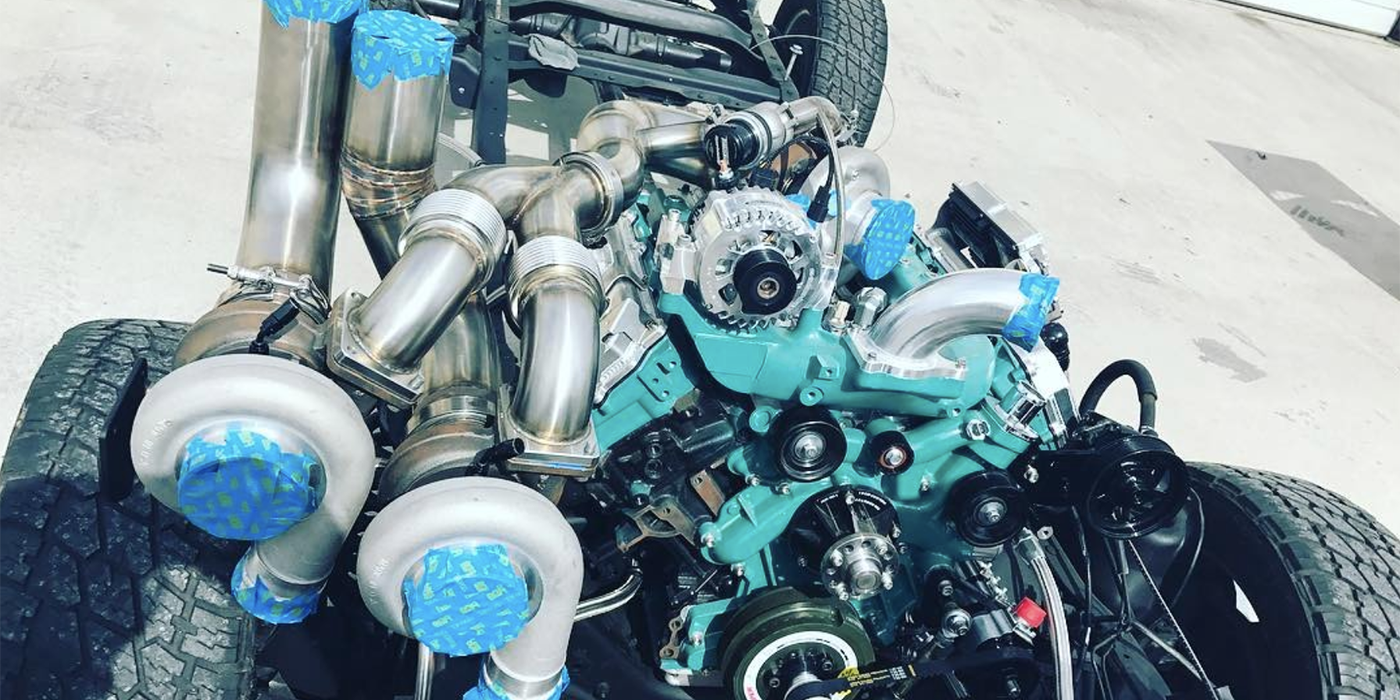 Looking to build a daily driver truck with some power when he wanted it, Art Martinez of PSP Diesel put together this triple turbo 6.0L Powerstroke engine. Under the hood of his single cab, single rear-wheel truck, find out what went into the build!

PSP Diesel started off as just a side business for two Ford dealership diesel techs – Richard Alvarado and Art Martinez – and now, more than 10 years later, PSP has become one of the larger diesel shops in Houston. Heck, maybe even in Texas. The funny thing about it, if you ask Richard, is he didn’t think he would end up working on diesels.

“I was taking auto and diesel at UTI back in 2000,” Alvarado says. “I ended up dropping diesel because I didn’t think I would ever work on diesel. As soon as I graduated with my automotive certificate from UTI, I got a job working in the diesel industry on commercial trucks and 18 wheelers.”

Richard spent five years working there before he started to get burned out and realized he had moved up as far as he could. He decided to get a job working on light-duty diesels at a dealership, which he happened to excel at. It was also where he ended up meeting his business partner Art Martinez.

“We hit it off pretty good,” Alvarado says of meeting Art. “We did a lot of side work together, and one day we had a conversation and Art looked at me and said, ‘Man, why don’t we try and open up a shop?’ We kept our day jobs, but put the right people in place and got a location and that’s how it started. From there, everything was just growth. Everything we did was just reinvested back into the company.”

PSP Diesel officially opened in 2009 and word of mouth is what helped the shop grow initially, since Richard and Art had built up a pretty good clientele from their side work. Even then, the diesel duo had a goal to try and be the biggest and the best diesel shop around.

Focused on the Ford Powerstroke family for its first few years, PSP has since grown to include Duramax and Cummins work as well. The shop has 24,000 sq.-ft. of space and 10 employees today.

“From the beginning, we were mainly focused on Ford diesel repair, and proper diesel repair, the way we were taught from the dealership,” he says. “We never focused on anything aftermarket. We were very much OEM repairs and OEM parts. We quickly found out within the first year that the aftermarket world is awesome. People want performance and people want to put things on their trucks. It really opened up a different venture for us in the performance world. It was probably eight years ago when we started getting pretty heavy into the performance side of things.

“We got pretty well-known for the Ford platforms, especially the 6.0L. We like them and we’ve built some pretty cool and crazy 6.0Ls. Even our personal trucks are 6.0Ls. We also do Duramax and Dodge Cummins as well. Just a few years after we got started, our customers had not only Fords, but either Dodge or Duramax as well and they didn’t want to take them anywhere else. They really trusted us and asked if we would work on this stuff, so we implemented the right people and put the right people in place. We educated ourselves as well and got all the proper tooling and equipment, and today, we’re a full-fledged shop when it comes down to the three of those platforms – Ford, Dodge and Duramax. That really opened up some doors for us.”

As PSP Diesel grew, both Richard and Art knew they needed more help on the business side of things, so they hired a friend of theirs to facilitate marketing and advertising the shop and its capabilities.

“Art and myself are techs,” he says. “We know how to work on trucks and fix trucks and do a good job. As far as the business side of things, we didn’t go to college for business management or how to run a business. We didn’t even have a sign on our building. It was kind of cool to be that busy without advertising, but when Stephen Peters got hired on, he really took it to the next level for us. He got us on the map, implemented advertising, got us onto social media, and it opened doors in a way to where we couldn’t keep up.

“I had to rent another shop aside from the one that we were in. I ended up having to rent three different warehouses just to keep up with the amount of work that we had. Today, we have one huge shop and things are good. We’ve got plenty of work.”

Richard admits that today’s work has gone away from the performance side of things due to emissions regulations, but they still do the occasional high-end job. However, the primary focus has been diesel repair. PSP also has an ecommerce site for selling engine dress up parts.

While performance may not be PSP’s focus these days, they still like to have fun with engine builds, and Art’s own triple turbo 6.0L Powerstroke is a perfect example of that.

“Art’s triple turbo 6.0L is pretty wicked,” Alvarado says. “It’s set up like a drift truck. It was shortened, so it’s a true shorty roll cage and it’s lowered. The truck was purchased off of someone we knew and it was a hot shot truck, so it had a flatbed on it. It’s a single cab, single rear-wheel truck.”

To start, the truck got completely stripped down. The body and bed came off. The frame got shipped out, shortened and sent back. The cab and the bed got shipped off and got painted a pearl white with flakes. Of course, the 6.0L Powerstroke engine got fully built up as well.

“It has a balanced factory crank, forged Carrillo rods and upgraded pistons from River City Diesel,” Alvarado says. “The pistons have heavy-duty wrist pins and were de-lipped and coated to handle high heat. We ended up doing a Stage 3 Colt cam, which was a little too aggressive. It doesn’t want to light up until it reaches like 4,500 rpm. It was set up for a drag truck more so than a drift truck. We plan to change that out.

“We got ported and polished heads from Kill Devil Diesel. It has some big injectors from Warren Diesel. We have a Thumper II injection pump in it. On the intake side, we used an Odawg intake, which provided good flow. The engine is also hooked up with some nitrous to help it light up. The turbo setup is two 64mm atmospherics with a 69mm SXE for the high pressure.

“In the valvetrain, we upgraded to Manton valve springs. We used a FASS 220 lift pump. We also have an ATI damper and billet flexplate, and the transmission is fully built from Sam Wise.”

The guys at PSP wanted this truck to be fun. It was supposed to be something Art could drive down the road, take for a weekend somewhere and play around with.

“We want it to act like a regular daily driver and just have the power there when you want it,” he says. “With the triple turbo set up and a Stage 3 cam it is pumping out about 650 horses, which we were a little disappointed with. We went a little too aggressive on the cam. We’re going to end up changing that out to a stock cam or a Stage 2 cam and it should be pushing us up near or above 1,000 horses. It will be able to build power at a lower rpm. As it is now, you run out of rpm too fast.”

With an easy cam swap planned, this triple turbo 6.0L Powerstroke should be exactly what PSP was hoping for – something fun.

“We’re just a couple of guys that like working on trucks and we don’t really ‘work’ every day. We come to play,” Alvarado says. “If you can make money doing something you love, then that’s a huge plus in life and that’s definitely what we do here.”

Diesel of the Week: The Crayola Box – a Triple Turbo LB7 Duramax Engine