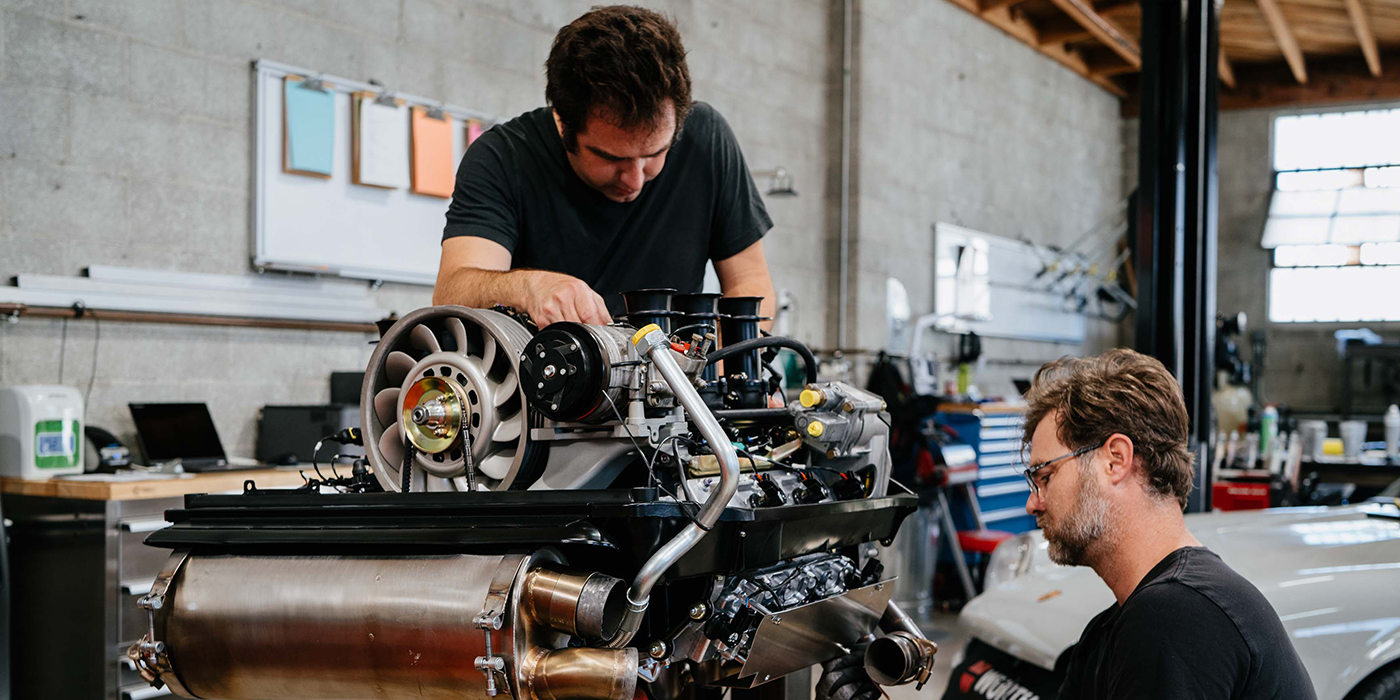 The Porsche name has become synonymous with sports cars and racing heritage because that is what company founders Ferdinand Porsche and his son “Ferry” set out to build when they first set up shop in 1948.

Marlon Goldberg from Workshop 5001 in Los Angeles is a young man at 38, working in a market where most of the industry is white-haired and headed out the door to retirement.

The Porsche market has always been made up of a diehard group of purists and enthusiasts who love to bask in the glory of one of the most iconic brands in sports car history.

The Porsche name has become synonymous with sports cars and racing heritage because that is what company founders Ferdinand Porsche and his son “Ferry” set out to build when they first set up shop in 1948.

The younger Porsche helped grow the new company and was instrumental in developing the first Porsche sports car, the 356. With just 40 horsepower from a slightly modified Beetle engine, the first Porsche made its mark with its agile handling and reliability.

After the 356 came the Porsche 911, which proved to be an even more significant success. Ahead of its time when introduced in 1964, the rear-engine 911 evolved over three decades when Porsche introduced a completely new 911 Carrera for 1999.

Goldberg has built quite a following at a young age, after working for a renowned custom Porsche builder, Singer Vehicle Design, he branched out to start Workshop 5001. While they build entire cars for some customers – doing the bodywork, paint, interiors, and everything – Goldberg is focused on the engine side. “I’m not necessarily hands-on with the chassis work. I have a very good understanding of it, and very talented people working for me… but I’m a mechanic and engine builder, and that’s where I focus my time.”

The air-cooled market has been hot in recent years, and the prices for old 911s have shot through the roof. However, Goldberg says that he would do it even if the market weren’t going nuts because it’s what he enjoys.

“If you asked other guys in the Porsche business, like some of the shops in Orange County who focus more on the new cars, their world revolves around the latest and greatest. Whereas, I’ve built my business and reputation around the old stuff because it’s what I like. And a lot of these cars are tired. They need to be redone. If we can redo them and implement some modern motorsport technology into the vintage stuff, then you have something that is badass to drive and appeals to younger people who like modern cars. It may look like a cute vintage car, but it hauls ass like a modern GT3. And to me, that’s very cool.”

A perfect example of his philosophy is a stock ‘71 911S they recently brought in that was restored by another shop. “The client sent it here just for some minor sorting and service. It had been a long time since I’d driven a stock 911S, which is a hot car in the market. It’s probably worth between $250,000 and $350,000. When you drive it and put your foot to the floor, it’s like grandpa’s jalopy!”

Goldberg admits there are plenty of purists who want a totally stock engine and everything to be just like it was originally, but not everyone wants that. “I think there’s a lot of guys who are okay with building that modern muscle in a way, adding a few ponies to it to make it breathe.”

Part of Goldberg’s formula for building Porsche engines and cars is to be purposely understated but still give it the performance his customers expect. “With all the engines I do for these air-cooled 911s, we easily get another 100 horsepower. In some situations, we’re doubling the amount of power without compromising the car in a way that most people would even know we made changes.”

A judge at the Porsche Club or Concours event may know it’s not the period-correct wiring, or that the MoTeC computer under the seat isn’t original, reveals Goldberg. “But to the untrained eye, we do this stuff with a kind of retro style that looks like it’s meant to be there. I’ve spent a lot of time working with Kinsler in the last three years, and they’ve made a ton of throttle body systems for us – their individual throttles and the manifolds they’ve custom made for me with the trumpets and the airbox gives it all a distinct aesthetic. They’ve been very collaborative with us.”

Goldberg says he’s very careful with the aesthetic part – even on the engines – because he looks at 99% of the world’s custom Porsches. “They’re just kind of cheesy. People want to put everything they think is a good idea into one car, and they want all these different parts to pop. What they end up with is something that looks like a hodgepodge. My theory is that, whether we’re working on a stock, original car, or building a hot rod from the ground up, we want to make it look like we did nothing at all like it was born that way. We make everything super understated. That’s just our philosophy.”

Workshop 5001 can build the most extreme custom Porsche, full of new electronics, but still make it seem analog. And Goldberg says a lot of people want that because they make them more drivable. But his clientele comes from all over the map. “They come out of the woodwork from all different parts of the world, but they’ve all got the same idea of what they want, which is something that’s very understated, sort of mechanical art and the way it drives. We’re lucky that these guys find us and it’s definitely niche.”

Goldberg prefers the 964, which is the second to last air-cooled model with the headlights that stick up like the original 911s. Hi shop builds them with MoTeC computers and Bosch motorsport ABS, Kinsler fuel injection, and so forth. These vehicles can go for hundreds of thousands of dollars, but Goldberg also has customers who go for much less modification that fits their budgets.

While the market is still nuts for early 911s, the 964 can still be found for a more reasonable price. Some custom builders will backdate the 964 to be a long hood pre-‘73, but Goldberg says he likes the car the way it is.

“For all intents and purposes, I built the first 12-15 Singers, so it’s my mechanical recipe. They would backdate the bodywork, and that was something I never really cared for because I liked 964s. We’ve come up with a whole program that keeps them looking like a 964, and we do a full mil-spec wiring harness, run by three MoTeC computers and so forth.”

Workshop 5001 starts with a 964 donor car, or the client can provide the vehicle, but donor cars can be a challenge, according to Goldberg. “I went to look at this car as a potential donor because he was asking $60,000 and it’s been hit on the front and in the back, it’s got corrosion issues, and 146,000 miles. The only thing that it had that kind of helped the value was it was a factory non-sunroof car. I said to him, I could pay $30k, giving you an extra $10,000 for it being a non-sunroof. I pointed out all these issues and he was a young guy and I could see him almost like tearing up.

“When he bought this car, he had no idea what he was doing. That’s another thing that manipulates the market. These guys think that old air-cooled Porsches are hot. They think they can buy any old one and can’t get it wrong. I showed up, and I take the car apart, but the reality is he’s going to sell it to someone on the internet who doesn’t know what they’re looking at and who is going to pay him whatever he wants for it.”

Goldberg admits that the air-cooled market craze is an element in his business, but that’s only part of it. The COVID-19 situation has also had an effect. “As far as the business in general, if you had asked me in January how things were going and the market for these engines, I would’ve said it is out of control. We’ve had so many engines on deck, but now that we’re knee-deep in this whole Coronavirus thing, figuring out where the world is going, it’s a little weird. A lot of the nature of our work, restoration engine building, this stuff takes time. We’re working on things that were in the pipeline before, but now it’s a little quieter.”

One of the unexpected twists to the current climate is that getting parts on time or even at all is more of a challenge. Goldberg says they’ve got parts on order that they can’t get or that have been back-ordered. He also says that the recent cancelation of shows has been disappointing in some ways because that is where he finds inspiration and suppliers such as Kinsler to help him achieve the concepts he wants. But, as most of us believe, he is confident things will go back to normal soon, and the market will be back in full swing as before.  EB

Markets: Grassroots Racing and the Future of Motorsports