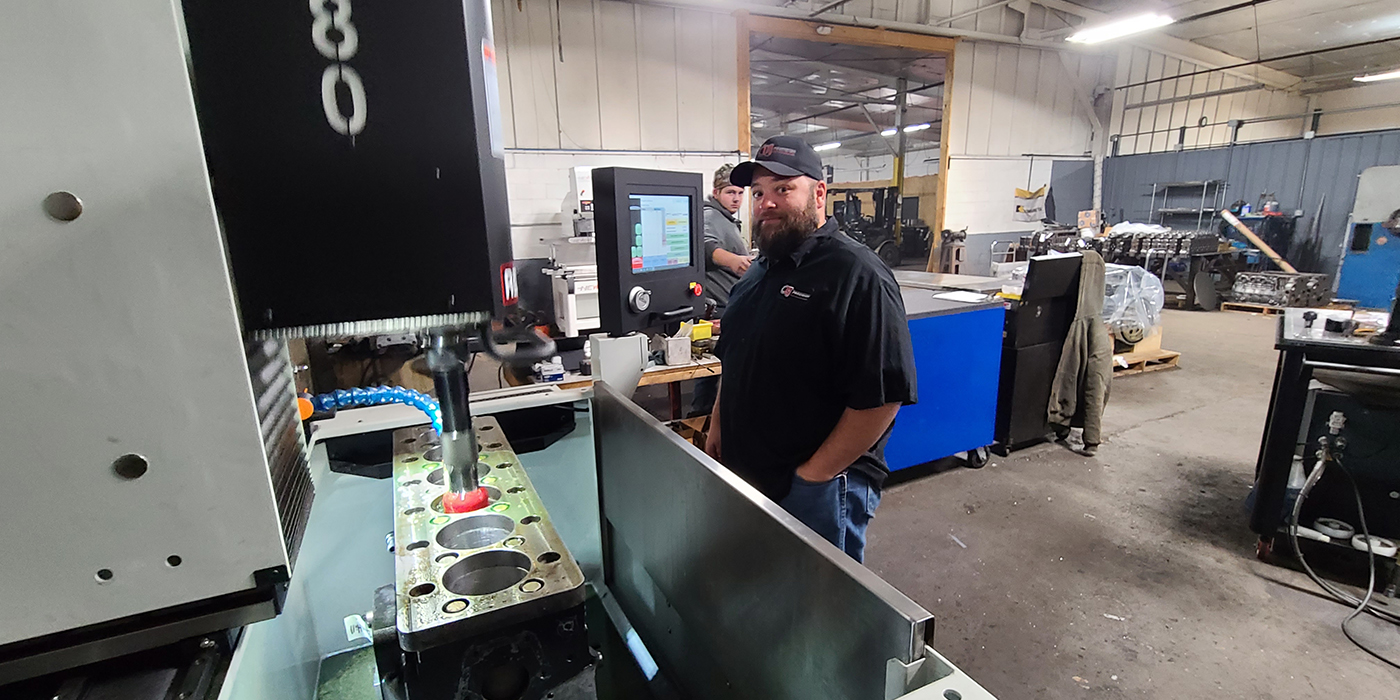 No one can argue Drew Pumphrey’s devotion to diesel. Initially triggered by his first diesel truck, a 1988 Ford with a 7.3L indirect injected naturally aspirated engine, that was all the gateway drug Drew needed to make diesel engine work his life.

“I was so addicted (to truck pulling) that there were times I had to win money at a pull just to be able to buy fuel to get home,” Drew Pumphrey says. “I did everything possible to make more power or get to the next level. I remember missing Thanksgiving Day at home because I broke the transmission in my truck. I was cleaning parts in my kitchen sink and rebuilt it in my apartment.”

With a passion as strong as Drew’s, he wasted little time getting further invested in diesel performance. After college, he went to work for Enterprise Engine in 2004, where he did general service work and performance engine builds on Cummins engines. He also became a full-time puller and began to get interested in machining.

However, Drew was far from screwed. D&J Precision Machine quickly flourished, and in June 2013, D&J officially got its own 2,400 sq.-ft. shop space.

Today, D&J Precision Machine is located in Cambridge, OH and has a dozen full-time employees who focus primarily on Dodge Cummins engines and components. However, the shop also makes parts for Ford Powerstrokes and does some private label work as well. Due to Pumphrey’s love for CNC machining, D&J is also a full machine shop, capable of doing all work in-house.

With all of those capabilities in one shop, it’s no surprise that D&J does a lot of machine work for other diesel shops, and builds some great, fully custom diesel engines, such as its Enforcer and Executioner engines – both 6.7L Cummins-based builds. It’s this devotion to diesel and doing quality work that earned Drew and his team at D&J Precision Machine the Engine Builder 2020 America’s Best Engine Shop award in the Diesel category.

“It’s very humbling for us,” Pumphrey says of the recognition. “I never thought in a million years that we would be recognized for something like that with a big group of people who are out there doing this stuff. We started from nothing essentially eight years ago, and to see where we’re at now, it’s just been a heck of a ride. I can’t believe we’re now considered one of the best diesel engine builders in the country. It’s pretty crazy.”

While high performance parts and engine builds such as the Enforcer and Executioner remain mainstays of the D&J business, Drew says 2021 will see a large push towards more stock engine customers and helping them gain better performance and durability.

“We added in more to the stock engine line,” he says. “We took care of customers with the 1,000-plus horsepower stuff really well, but we didn’t do a whole lot for under 1,000 horsepower. We still focus on the Cummins platform, but added in everything for a stock, slightly upgraded engine that just takes care of some of the durability issues that Cummins have up to that 1,000-horsepower customer.

“That was a really good move. If we wouldn’t have done that, we would have been in trouble this year, but we’re up significantly at this point over last year, even with being so far off in the first quarter.”

With a push toward more stock engine work, D&J had to decrease lead times and add more equipment to the shop in order to put the right infrastructure in place.

“For 2021, what we’re really focusing on is trying to bring the stock market in to be 50% or more of the business and to have a good foundation,” he says. “That stuff is always moving well and we need to take care of those customers. We’re not trying to reduce the high-performance stuff we do, we’re just trying to add in the stock stuff. That’s going to be a lot of work.

“We added some equipment. We added a better cylinder hone and better washing equipment. We also added a new seat and guide machine to speed up the process and do better quality on the valve job stuff. We added all those items right through COVID to be able to turn the corner and accelerate out of it into the little bit lower horsepower, stock market.”

According to Drew, D&J’s stock focus will be mostly in long blocks and cylinder head work due to those durability issues.

“Because of issues like valves seats falling out and things like that, we upgrade the cylinder heads,” he says. “We also use genuine Cummins pistons, so it’s higher quality than what most of the reman manufacturers are really using. We use Stage 1 ported cylinder heads and a camshaft for better air flow, which helps reduce EGTs and delivers better drivability and better fuel economy, etc. That’s the kind of stuff we’re adding in more than anything.”

These business changes also mean D&J will be looking to hire more people and will be changing around the shop’s current layout for better production flow.

“We’ll definitely have to hire more people,” Pumphrey says. “We’re changing around the infrastructure in the shop too. We’ve added more space for the engine build room and the clean room. We’re going to set the cylinder head department up more like an assembly line so we can scale up and have a cylinder head done in hour out of the shop. The plan is to keep building on that and get to where we can really take care of that demand.”

Despite an increased focus on lower horsepower customers, Drew says the higher end stuff has been coming back pretty good from where it was in March. In fact, he’s been surprised at how many Enforcers the shop has sold.

“Our high-horsepower engines are the Enforcer and the Executioner,” he says. “We like to prove our products a while before we really release that stuff to everybody, so the Executioner has gone out and raced a season with the Fire Punk crew. It had over 100 3,000-plus horsepower passes on it this year. We still haven’t pulled the short block apart from the dyno or anything like that, but it’s been a very proven platform. We’re happy with that.

“For that being a brand-new engine platform that was designed from the ground up and to go out with very few issues and perform all year as it was supposed to is a pretty good year for us. However, the Enforcer has still been the primary workhorse of the higher-horsepower customers.”

With proven, custom engine builds, in-house manufactured engine components and a drive to increase and better the D&J business, we’re excited to see where Drew takes his diesel shop in the near future. For now, D&J can celebrate being Engine Builder’s 2020 America’s Best Engine Shop in the Diesel category!   EB