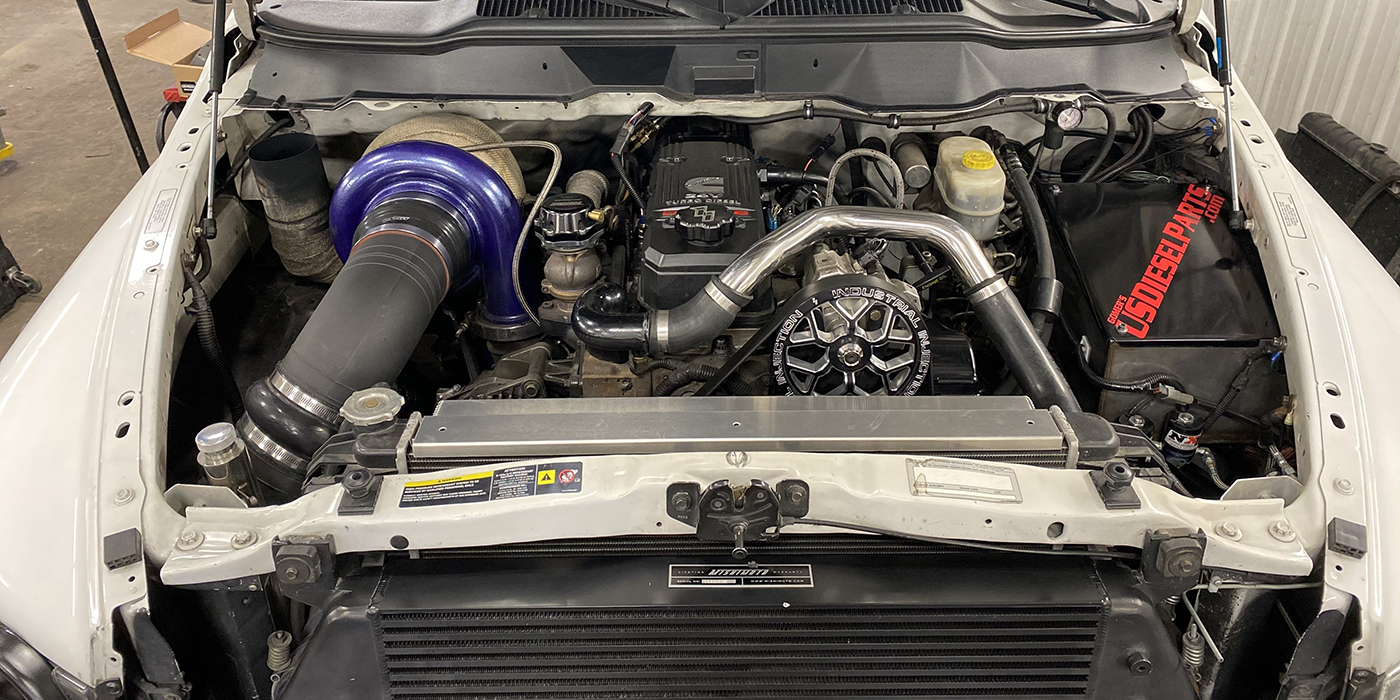 In the early 2000s, as diesel performance was coming into its own, Gomer’s Diesel Inc. and US Diesel Parts was also making the transition to more diesel repair and performance work. It did so by cutting its teeth on a white 2004 Dodge with a 5.9L Cummins engine. Today, this truck makes 1,800 hp! Find out what went into the build.

The very nature and terrain of Montana often requires the ruggedness of a truck. Therefore, many Montana residents own trucks, especially diesel trucks. That’s why businesses such as Gomer’s Diesel Inc. and USDieselParts.com have been around such a long time. In the case of Gomer’s Diesel, it’s been a Missoula, MT staple since 1938. What started with a focus on agricultural equipment, has since transitioned to general diesel repair and performance work, as well as diesel parts distribution.

“We’re a third-generation company,” says Moe Johnson, a partner at Gomer’s Diesel/USDieselParts.com. “It’s a family owned business and we’ve been doing diesel repair the whole time – from diesel fuel injection to distributing engine parts. We had three locations at one point. Now, we’re just down to one in Missoula, MT.

“I started here in college and just never left. I became partner around 1999, which was about when the diesel performance market started to come alive. We kept changing and going with it ever since then.”

Around 2003 is when Gomer’s Diesel built on to its shop to allow for installation work in the Missoula location. Prior, it was a fuel injection shop, a starter and alternator rebuild facility, as well as a warehouse distributor for Federal Mogul, FP Diesel and Mahle/Clevite back in the day.

As Gomer’s Diesel saw the industry changing, it too adapted to the new diesel segment and diesel customer through its distribution business and shop capabilities.

“We saw the industry changing toward diesel performance, so we became a distributor for all the top performance guys such as BD Diesel, ATS, Industrial Injection, Gale Banks, and K&N,” Johnson says. “We saw the writing on the wall that installation was the name of the game and where the future was going, so we also built onto the building and turned it into an 8-bay shop capable of installation, repair and performance.”

When it comes to the shop’s diesel work, Johnson says Gomer’s is not biased by any means and does work on all of the big three diesel platforms.

“Montana being what we are, there’s all kinds of trucks up here, so we’ll do Ford, Dodge and Chevy. Those are pretty much our mainstay,” he says. “The majority of our business is general repair, but we do a fair amount of performance stuff. It makes you better on the performance side when you’re doing the repair side too. It gives you a lot more knowledge on how things work and having a good diesel fuel injection background is a real bonus.”

Gomer’s Diesel has 15 full-time employees, eight bays, seven lifts and 20,000 sq.-ft. of space, where in addition to doing general repair and performance work, the shop still builds old mechanical fuel systems for some of the ranchers in the area.

But one truck and engine set up in particular really helped Gomer’s Diesel over the past 15 years to keep up with the industry. That truck was the shop’s white 2004/2005 Dodge with a 5.9L Cummins engine.

“That white Dodge was really the start of our diesel performance,” Johnson says. “Back in 2004-2005, that’s the truck that we learned and cut our teeth on. It’s still out there running today. The truck has a 5.9L Cummins in it, which features a twin turbo, dual fuel set up that cranks out 1,800 horsepower.”

“We’ve got it all caged up and set up for dyno events and drag racing,” Johnson says. “It has an ATS race transmission, a BD Diesel transmission double stack tranny cooler, BDS recoil traction bars, Yukon chromoly axle shafts, and a Northern Radiator dual brushless fan and shroud.”

With all of this in one truck and 1,800 horsepower on tap, this 5.9L Dodge Cummins is one hell of a ride!