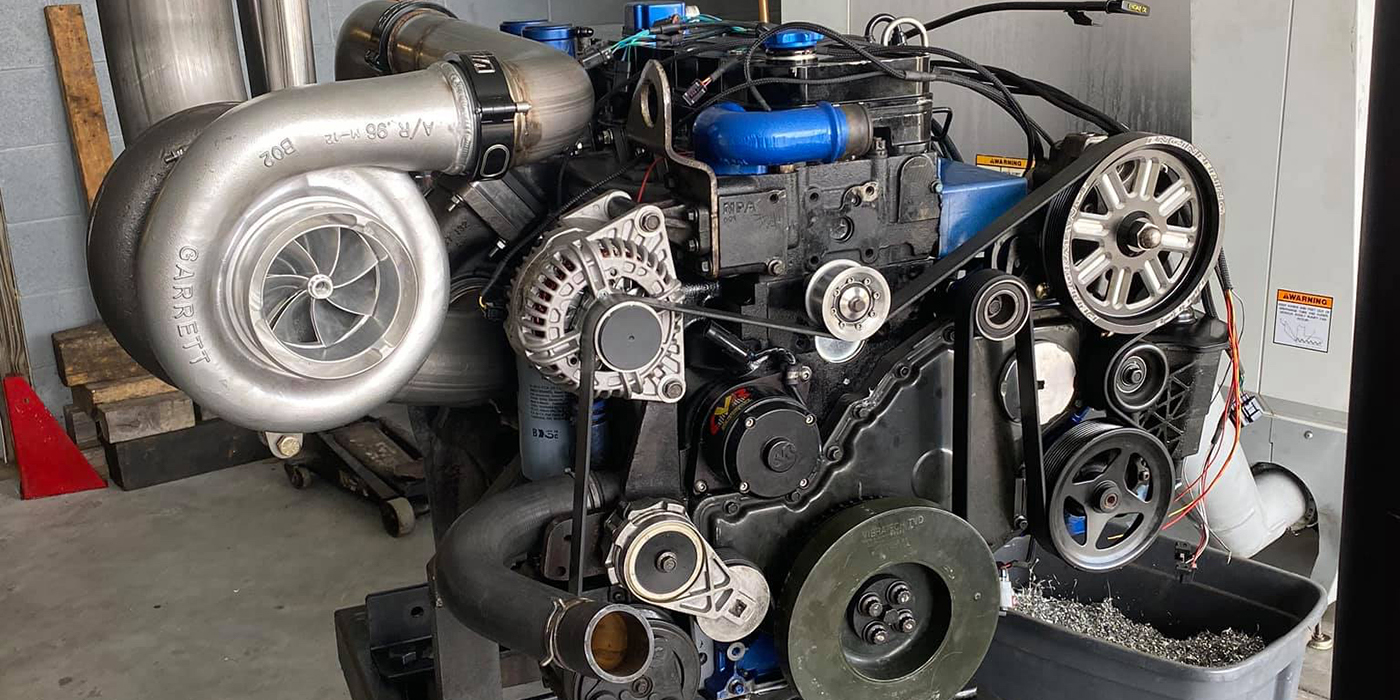 New Performance Automotive prides itself on its drag racing and truck pulling engines, and one such truck that shop owner Steve Burton is especially proud of and continues to develop is customer David Petrick’s deck-plated 6.4L compound turbo Cummins. As David keeps looking to up the ante, Steve is right there to answer the call on the engine side of things. Check it out.

Steve Burton opened his diesel shop, New Performance Automotive, more than 20 years ago as a way to further his passion for truck and tractor pulling. Steve says he was born a motorhead, like most of us guys, and he’s been around the automotive and racing/performance industry most of his life.

“I worked as a mechanic at a factory and learned a lot of the trade and how to machine there,” Burton says. “Then, I opened my own business in 1998 building engines for truck and tractor pulling and we’ve evolved from there.”

Burton moved his diesel shop in 2004 to its current location in Rural Retreat, VA into a 6,000-sq.-ft. facility. With a newer shop and space to grow, Steve and his team slowly but surely started adding machinery to the point where they could do all of their own machine work.

“I wanted to be self-sufficient,” Burton says. “There are a lot of great guys I’ve done business with over the years, and not to taken away from them, but I just wanted to be self-sufficient. If I wanted to come in on a Saturday evening and do my own thing and bore an engine out or line bore or whatever, I’d have the machinery to do it myself. I’ve always had the motto that if you’re waiting on somebody else, you’re in trouble.”

“All of my machinery is in the basement and we do general repair on a lot of diesel trucks, rescue squads and fire trucks and stuff like that on the upper level of the shop,” he says. “Downstairs we have three CNC machines. We make a lot of our own parts. The only thing we don’t do as far as our engines is we don’t grind crankshafts. We also have an in-house engine dyno and that’s incorporated in the downstairs machining area.”

According to Burton, about 80% of the shop’s work is performance diesel where they work on all of the big three diesel platforms. However, Cummins is predominantly their focus when it comes to drag race and truck pull engines.

“The B series Cummins and the Dodge trucks are our mainstay,” he says. “We also do a lot of 6.0L Powerstroke work just because a lot of our customers on the upper floor have a lot of that stuff. A lot of rescue squads have the 6.0L, so we do a lot of that, but nothing performance for those. That’s just basic repair and rebuilds. Most of our performance work is for diesel drag racing engines and diesel truck pulling engines.

New Performance Automotive prides itself on its drag racing and truck pulling engines. The shop has been developing a platform for the up and coming 2.6 smoothbore pulling class in the PPL Series, which they call the Pro Street diesel class. The shop has also had a couple of trucks compete in the King of the Street competition and they’ve had a truck in the Ultimate Callout Challenge.

“We’ve done more drag race engines than we do pulling engines just because there’s more people into it,” Burton admits. “But we have a good recipe for both applications.”

One such truck that Burton is especially proud of and continues to develop is customer David Petrick’s 2007 four-door short bed Dodge with a 6.4L Cummins in it. David has been competing in a number of diesel events around the country, including Smoke & Speed’s King of the Street in Ohio and DPI Expo’s UCC event in Indianapolis. As David keeps looking to up the ante, Steve is right there to answer the call on the engine side of things.

“David’s 6.4L Cummins started out life as a triple turbo truck for the King of the Street competition two years ago,” Burton says. “Then, over the winter, we switched it to a compound set up. It’s a 107mm over an 85mm compound turbo set up from Forced Inductions.

“We started out by a sleeving a 6.7L into a 6.4L. We had pretty good success with that initial engine. It did a lot of dyno events, drag racing events and two years of the King of the Street competition. We built the new engine doing the same thing – 6.7L sleeved to a 6.4L – but with a deck plate on this one. We make our own deck plates in-house.”

“We do our own cylinder head work,” Burton says. “The head is ported and tested on the flow bench in-house. We’ve milled off the head and we used a D&J intake manifold on it. Of course, it exits through a Steed Speed exhaust manifold.

“Another key component in that engine is we do our own custom lightweight crankshafts. I use those in all of my drag trucks, as long as the customer wants one. We take about 30 lbs. off of the existing OEM Cummins crankshaft, rebalance it and put our own little spin on it. That seems to work really good in the drag trucks, and I feel it’s an advantage on good 60-foot times and just overall good lower ETs.”

Petrick’s Cummins engine is also running two fuel pumps, but Burton admits they are a smaller pump system than what a lot of people run.

“We’ve been pretty successful with it though,” he says. “We’re running a 10mm with a 12mm belt-driven pump. We still run the 5.9L rails and the 5.9L lines. A lot of people have switched to the 6.7L, but we’ve been successful making pretty good power with the 5.9L and the correct tuning.”

With this current 6.4L compound turbo set up, David has made more than 2,200 horsepower, but he’s not stopping there.

“We’ve made as much as a 2,260 horsepower at the rear wheels with the truck,” Burton says. “I believe his quickest ET with the full weight truck is a 6.14. The current truck uses a 48RE transmission in it and it’s basically a steel, full-weight, streetable truck.

“We finished 10th this year at UCC. We want to get a top five. Ultimately, we want to win. We feel like we’re going to have to step it a little bit. In the UCC Challenge it’s the best of the best, so we’re going for broke. If we can get a good top five next year, I feel like we will learn for the following year to maybe get in there with a run for the win.

“We’re also going to do the King of the Street again this year. David’s full-weight truck is what we will have to use because they have to be a street legal truck. We got a fifth the year before last, and this past year we got fourth. We’re looking for a win this year in that competition as well.”

Currently, New Performance Automotive is working with Petrick on a new truck set up for the 2022 UCC event, which they plan to make a lot lighter than his current truck.

With eyes on podium finishes or better at future diesel events, Petrick has the right mindset, and Burton and New Performance Automotive are giving him the goods under the hood.