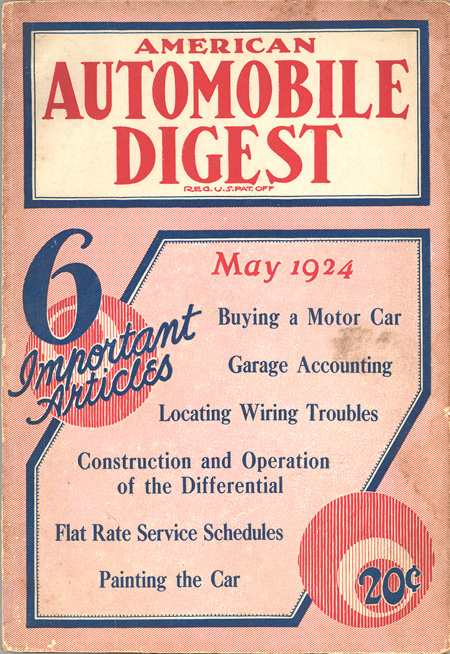 What will the automobile engine of tomorrow be like? Will it, five or ten years hence, be simply a refinement of today’s engine – a small improvement here, a slight modification there – or will it be an entirely different power unit? Today’s automobile engine, taking the field as a whole, seems almost the acme of perfection. Intrinsically it is one of the most efficient prime movers that we know of today and yet it has limitations that under present day conditions, are beginning to demand attention and which under future conditions will assume serious proportions.

The principal thing that will force this improvement or change in the automobile power unit and the one which comes the closest home to you and I, as owners and drivers, is the fuel question. The sources of gasoline, petroleum crude oil, are not inexhaustible. It is true that new fields are being discovered, new wells opened, but these are forced by the rapidly increasing demand for fuel and the depletion of wells and fields which, flowing freely a year or two ago, are now rather [miserly] in their yield. As the demand for gasoline increases and the supply diminishes, the price, following the inexorable law of supply and demand will increase, just as we have seen it increase in the past years.

All students of the petroleum industry appreciate this gradual depletion of the fuel supply and it is engaging the serious attention of automotive engineers everywhere, a continual search being made for means to stretch out the number of miles we can travel on one gallon of gasoline. If we can double this, naturally our source of supply will last twice as long.

One solution of this impending shortage, and it probably represents the popular attitude, is htat when it becomes acute some inventive genius will perfect a fuel that can be manufactured cheaply, and will take the place of the waning gasoline supply. It possible that this may be the ultimate outcome and twenty years hence you and I may be perusing the “ads” concerning the relative merits of “Speedex Synthetic Gasoline” and “Peppo Motor Spirit.” However, the majority of engineers are not relying on chance and necessity for the solution of this problem, but are endeavoring to devise ways and means for increasing the fuel economy of our automobile engine today.

Engineers are attacking this problem in two ways. One group is working with the conventional engine drive, such as we have in our present automobliles, endeavoring to increase its efficiency. The other group is searching for an entirely different source of power or at least a different method of applying that power to the rear axle.

[A] method of power application is being advocated by a group of European engineers that is rather unique and bears promise of great possibilities. They take the stand that while the modern automobile engine is probably one of the most efficient of prime movers, the manner in which it is used makes it one of the most inefficient. They point out that it is not at all unusual to obtain a fuel economy of six-tenths of a pound of fuel per break-horsepower hour on the test stand, with a modern automobile engine. At twenty miles per hour this, translated into car miles, would be between fifty and sixty miles to the gallon of fuel. We only need recall how often we must stop to buy gasoline to see how short we fall of obtaining this ideal.

This reason is simply that seldom do we operate the engine at its most economical load and speed. This is usually at the point of maximum torque and the only time we make use of this is under very heavy loads such as hill climbing, and extremely high speeds, where wind resistance amounts to such a large factor that fuel consumption, in terms of mileage per gallon is no better, indeed is worse, than at lower speeds. It is mainly this compromise between most efficient engine loading and air resistance that gives us our present most efficient car speed.

If, on the other hand, our automobile was fitted with a small engine which developed just enough power to drive it at twenty miles per hour, we would be able to obtain regularly the fifty to sixty miles per gallon that is possible for the engine then would be operating at its most efficient point. Indeed, considering miles per gallon only, we would obtain better results than we now do, if we fed our fuel to a small gasoline electric generating plant, and charged storage batteries, which in turn would be used in an electrically driven automobile.

Does a combination of the two seem like a flight of the imagination? In a modified form this system (the Dual-power system) has been proposed before the Institution of Automobile Engineers, as a satisfactory and economical type of drive for the motor truck.

This system in its simplest form consists of a battery driven vehicle with a  small gasoline engine added; and it is fairly obvious that with such a combination it should be quite possible to keep the engine working at pratically full throttle at all times, except when the vehicle is coasting, or nearly so.

Under normal loads, such as on the level, the engine would be furnishing most of the power. Extra power demands occasioned by hills or necessary for acceleration, would be supplied by the electric motor and storage batteries. Thus the engine would be operating at or near its most efficient point the great majority of the time with resultant high economy in fuel consumption.

Another inherent advantage in this type of drive is that it is regenerative, this is, when the machine is coasting down hill the electric motor becomes a generator, charging the storage battery in a manner similar tothat so successfully used in the latest electric locomotives.

This dual-power system was in the Daimler K.P.L bus several years ago. Lack of appreciation of the proper balance between engine and motor size prevented it from realizing to the greatest extent, the inherent economies possible, yet from the standpoint of ease of control it was a great advance over the straight gasoline propelled vehicle.

Will our future automobile compromise some such method of drive as that described above? As the need for greater fuel economy becomes more pressing and no greater relief by synthetic fuels can be foreseen, than at present, such a system will, no doubt, be developed to a working basis, whereby the flexibility and operating radius of the gasoline car of today will be retained, with practically the smoothness of operation of the electric, and by the use of higher compression engines, with a fuel economy now only approached by the motorcycle.

This article was excerpted from American Automobile Digest, May 1924