Today’s engines are smaller, lighter, more fuel efficient and have the highest output per displacement than at any other time in the history of the automotive industry. With these advantages have come designs that must be able to withstand loads and pressures that go way beyond the large displacement OHV, oil leaking, fuel guzzling street thumpers of the past.

One of the technologies that has been implemented for many of the engines today is the configuration of the block. Many of today’s engines are using “bedplates” (see Figure 1). The block is split at the main bearings or the crankshaft centerline so there are two distinct pieces to the block; an upper part that houses the cylinders and the lower portion, thereby eliminating main bearing caps.

One of the distinct advantages to the bedplate is the increased main bearing housing material in the lower half of the engine with a distinct main web bulk head not only in the upper block but the lower bedplate as well. This major increase in the volume of material around the main bearing and increased support of the crankshaft allows for an increase in cylinder combustion pressures while operating at a maximum of efficiency of trace detonation.

Another benefit to the rigidity around the crankshaft is the dramatic reduction of NVH (Noise, Vibration and Harshness). In addition, this design gives the ability to have bosses and mounts designed into the engine block for various accessories, transmission mounts/braces and even chassis strut/support mounts in some cases.

Bedplates are not a new concept and have been used for many years in very large engine applications. In fact, bedplate technology continues to be used in the largest engine in the world, the Wartsila-Sulzer RTA96-C turbocharged two-stroke diesel engine (see Figure 3).

Some facts about the 14 cylinder version:

Even at its most efficient power setting, the big 14 consumes 1,660 gallons of heavy fuel oil per hour.

Bedplates and their installation bring some very unique challenges. First, with regard to the basic handling, they need to be treated with the utmost of care. Whether they are aluminum or cast iron, they cannot be abused because any dents and dings will affect their ability to seal, and maintain main bearing housing bore dimension and, of course, crankshaft clearance and bearing crush. They are also typically very complex in their design, housing oil passages, transfer grooves and possible “O” rings for oil sealing (Figure 2).

They also have many bolts of various different sizes and lengths and different torque procedure and sequence. The day of dropping on main caps and using a torque of sixty-five foot pounds does not apply to bedplates. If you do not use the OE recommended procedures you will find yourself in trouble in a big hurry, either in bearing clearance or sealing. There is no maybe with bedplates – it has to be correct.

There may also be oil passages that are within the bedplate itself that are plugged, whether with pipe type plugs, soft plugs or steel balls, but they must be removed and these passages cleaned of any debris or contaminants that may be reintroduced into the engine.

The mating surfaces between the bedplate and block are critical and should never be cleaned with a steel scraper, sanding pad, refinishing discs or any method that may remove material or alter the mating surface. These surfaces must be perfect on both the block and bedplate. The ultimate would be a large lapping table and a very fine lapping compound but that is not likely to be feasible so utmost caution needs to be adhered to. Chemical cleaning would be the preferred method for bedplates and any contact surface debris that may need be removed should be done with a “soft” scraper only, especially if it is aluminum. If damage appears to breach the sealing face an epoxy may be the way to fix that; welding would cause too much heat and distortion.

Anaerobic sealer is considered to be the best sealer for the mating surface between the bedplate and block, however there are some OE engines that recommend the use of RTV sealer. I will leave the decision up to you but my money is on anaerobic since RTV could potentially give you thickness that may change clearances and bearing crush. If you have not gotten it by now let me just say it plain and simple “the integrity of the mating surface condition is critical.”

By now you are probably certain that I have gone through a lot of musing about bedplates – and you’re right. The payoff from this article is that if you have a bedplate leak it is the nightmare of nightmares: you cannot stop it and you cannot fix it in the chassis. To repair a bedplate leak, you’ll have to take the engine out of the vehicle and do a major lower end disassembly to repair the leak. That is going to cost you a whole lot of time, money and ill will. So I suggest that you treat bedplates like you’re taking out your best friend’s sister…with the utmost of care. 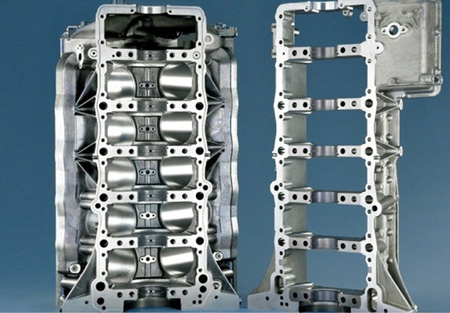 EngINtel: In Lightweight Land Rockets Or Huge Ships, Bedplates Have Presence In Today